Reboot By The Sea 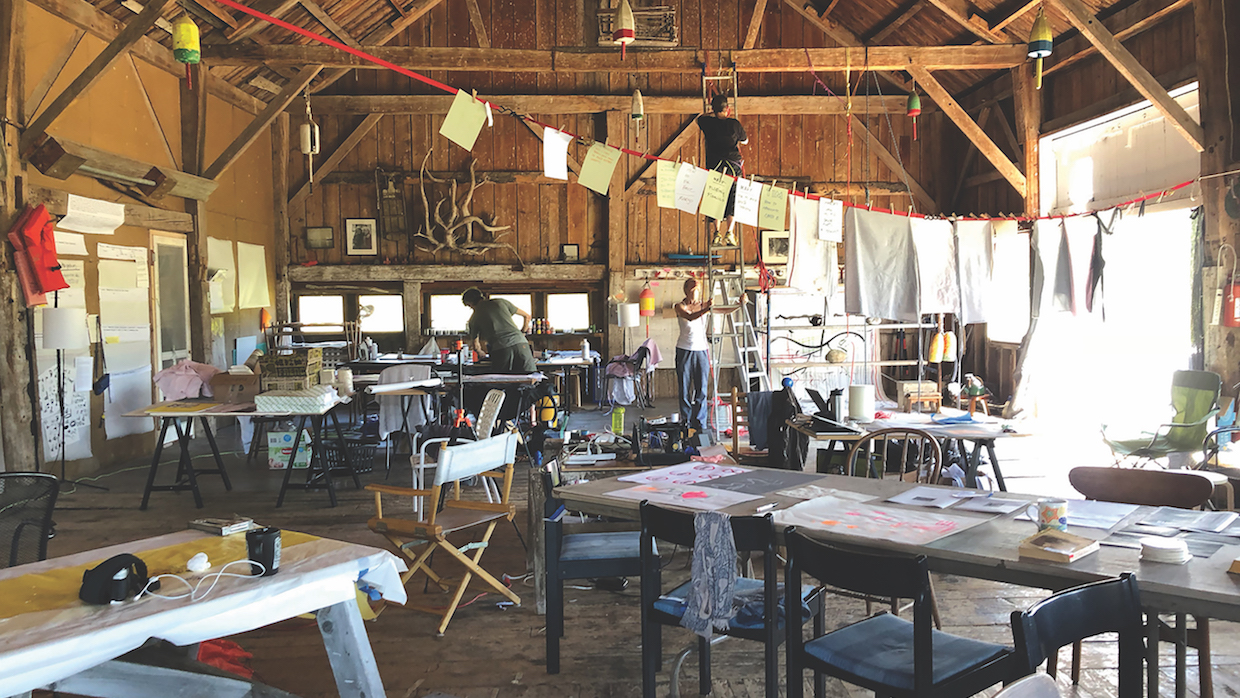 It might be hot. There are several quarries for swimming.

It might be cold and rainy, and we’ll be in a non-heated, non-air conditioned barn.

There will be mosquitoes.

So began a long list of somewhat unsettling particulars describing conditions for the six-day DesignInquiry residency that took place at the end of June 2018 on Vinalhaven, an island halfway up the coast of Maine. I had applied six months earlier, intrigued by the year’s theme, “Rewrite,” and was delighted when I was accepted. I was stepping down from a decade-long leadership stint, having cocreated and chaired a new department in USC’s School of Cinematic Arts, and I needed a break. Better, I needed a full reboot, something that would really shake me up.

In my application, I said that I would use the residency to rewrite the dissertation criteria for the students in our Media Arts + Practice Ph.D. program, where our insistence that students “demonstrate mastery,” make an “original contribution,” and “prove a hypothesis” runs counter to forms of criticality that refuse mastery, eschew originality and question the very parameters of proof. In imagining a different form of critical practice, I quoted Michel Foucault’s reverie in “The Masked Philosopher”: “I can’t help but dream about a kind of criticism that would try not to judge but to bring an oeuvre, a book, a sentence, an idea to life; it would light fires, watch the grass grow, listen to the wind, and catch the sea foam in the breeze and scatter it.”

Catch the sea foam in the breeze and scatter it!

Where better than an island in Maine to catch the sea foam?

It was a lofty aspiration, and I made the 75-minute ferry ride to Vinalhaven sitting on a cold metal seat on the upper deck trying to relax. The genesis for DesignInquiry was the Maine Summer Institute in Graphic Design, which was founded and directed by Margo Halverson, a designer and professor of graphic design at Maine College of Art (MECA). Launched in the early 1990s at MECA, the institute featured a more traditional academic structure, with up to 50 attendees at each annual event learning new things in workshops. In 2006, however, Halverson, in conversation with several other institute participants, decided to reimagine it. Could the event be more interdisciplinary, expanding from design to include other fields? Could it focus on a particular subject or theme that could be addressed from diverse places of interest and expertise? Could it forego the traditional hierarchies of educational conferences, with clear demarcations between teacher and student? Could it involve collaborative cooking? Could it be… on an island?

Yes, it could. On the Vinalhaven ferry, looking at a map of Penobscot Bay, I charted our trajectory past Spring Point Ledge and the breakwater, the narrows and the reach, Burying Island, Potato Island, and Old Harbor, all of which are due north of Folly Ledge. It seemed eminently auspicious, the bay itself already so rich with the poetry of unfamiliar locales. That was all well and good, but I was still a little nervous. Designers are so cool; it can be intimidating. My daughter had made a batch of chocolate chip cookies “to help you with your new designer friends,” and I carried the gift with care on the top of my bag, eating only two during the ferry crossing.

When the ferry reached Vinalhaven, I lugged my suitcase up the dock and was warmly greeted with a giant hug by artist and designer Emily Luce, one of the DI organizers. So far, so good. It was late afternoon, so we went straight to the barn. People were bustling around setting up the kitchen with propane stoves, counters for cutting and prepping food, and a small table with gin and whiskey and wine. I was quickly put to work chopping parsley, and someone brought me a delicious gin and tonic. There were four longer tables for eating, which we did with gusto, and after dinner, the week’s topic was introduced, along with the reminder that the organizers refer to themselves as “framers” and while they have decided on the residency theme and curated the group in attendance, they divest all control after that first evening, refusing to organize any further.

Peter Hall, a design writer and faculty member at Central Saint Martins and one of the DI co-founders, addressed us via Skype. He described how DI attempts to create “proximal learning zones” in which people gathering in an unfamiliar setting to focus on a particular topic can achieve astonishing and innovative results very quickly. To help jumpstart this proximal learning, another DI framer, Mark Zurolo, who teaches graphic design at the University of Connecticut, invited everyone immediately to offer to share a skill. “Each one teach one,” he said. We wrote our particular teachable skill on a piece of paper, which we then traded in for a pair of “tick socks,” white knee-high tube socks useful in preventing Maine’s worst arachnid from crawling up your leg and burrowing into your skin. Anyone could request a lesson, and I found myself giving instructions throughout the week on how to navigate a paddleboard in a stiff wind down at the beach in front of the barn.

The next morning, foggy and wet, featured a set of presentations and questions. What does it mean to rewrite the past? To rewrite one’s own life? To revisit places of loss? People presented their projects, inviting questions and feedback. After a robust set of conversations, as well as some uncomfortable singing for a podcast in progress, we broke for lunch, and then wandered off to do our own work. Several people were assigned to make dinner, and Charles Melcher, another MECA faculty member in graphic design, offered instructions on how to make bread, which he did nearly every single day of DI.

Indeed, food was a big part of DI. Being from LA, to say that my diet is gluten-free, sugar-free and dairy-free is axiomatic. The cookies on the ferry constituted the first dietary violation; nearly every other thing I ate that week contravened my usually strict rules. But that’s not important. The main thing is to design a meal for 30 people, and then to make it in collaboration with other people. Using leftovers (as a form of food rewriting) was deeply challenging: Will there be enough? Will it be any good? But it was also revelatory. Who knew that such a simple act could be so profoundly joyful? Furthermore, the pleasures of the bread baking were almost unnerving. The daily afternoon kneading, the baking, the smell wafting through the air, and then, finally, the taste of butter and raspberry jam on a freshly baked crust. It was a perfect storm of sugar, gluten and dairy, enjoyed in the afternoon sun in a big barn on an island in Maine. I felt a decade of administrative pressure dissolving, layers of angst sloughing off like edges of a glacier, one layer at a time. Was this a rewriting of my career? Inspired by freshly baked bread?

The days slowly blossomed, losing any sense of rigidity. We wrote together; we collaborated on projects; we made collages; we made moving image loops using Boomerang; we made mushroom prints. We went out to the local bar to play bingo, and we talked some more about how to reclaim a history that has been stolen. We talked about reframing and revising. About return and renewal. We were people of all ages and rank, from a broad range of disciplines, including art, dance and film. There was a curator, as well as a woman who knew a startling amount about the nefarious uses of artificial intelligence. At the beginning, nothing was overtly political, which I found to be a relief. Gradually, the political appeared, and that, too, was a relief. We talked about ghosts, and a big white poodle named Archie—leaping, barking, dancing and peeing—embodied the sense of play that subtly pervaded every single day. And the designers just kept making and making. They cut things up, sewed them together, printed them out, taped them down, pressed them into layers, and took their picture. There was nothing that could not be remade, rewritten.

Me? I did not rewrite the guidelines for my students and their dissertations as I had promised. But I did write five short essays in a flurry of creativity I haven’t experienced in a decade, and I created a long list of other strange things, including a collage and a hand-sewn wavelike dinner napkin. But the best thing was this: I got a chance to learn with others, not as a student, and not as a professor, but as someone invited into the blooming potentiality of generative knowledge experienced alongside richly sensual delight and curiosity.

And the quarries for swimming? Stunningly beautiful black and white rocks surrounding bracingly frigid clear black water. And the cookies? Well received: Designers, it seems, love chocolate. And the mosquitos? Dense. Fierce. But you know what? I hardly noticed them.