“Our Entire Moon Was Lit by One Single Lamp”: DP Linus Sandgren on First Man 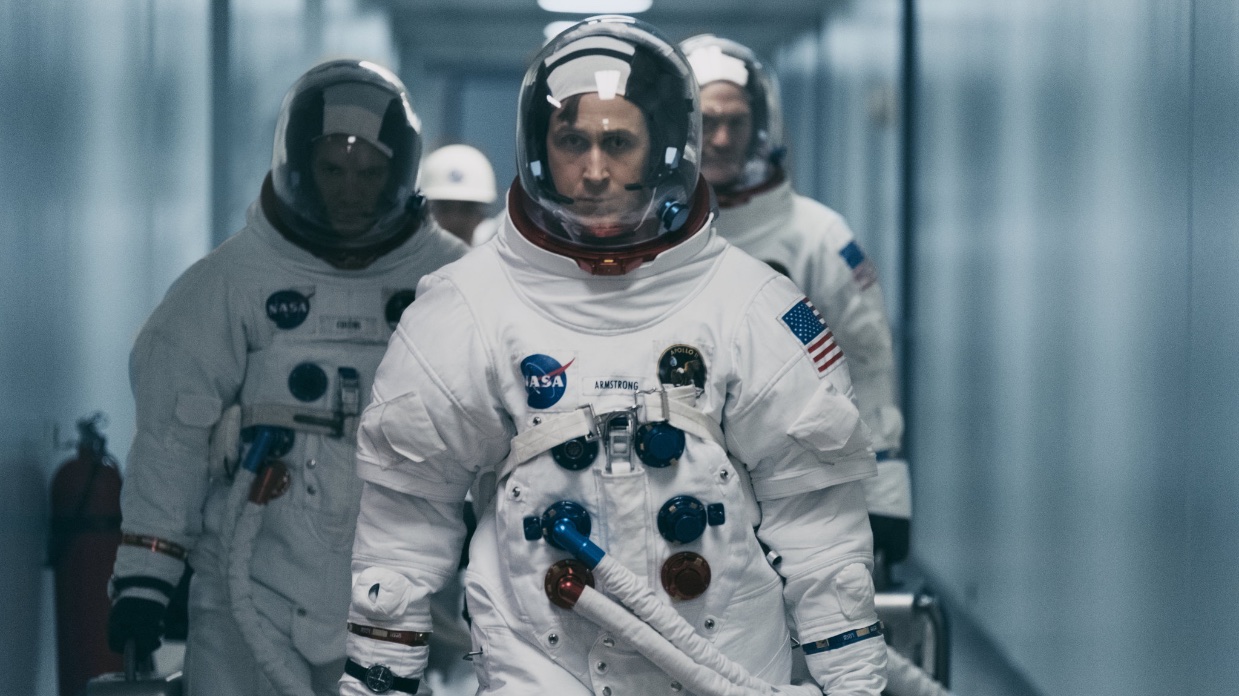 by Matt Mulcahey
in Cinematographers, Columns, Interviews
on Oct 22, 2018

In La La Land, cinematographer Linus Sandgren imbued the love story of two showbiz strivers with the opulent grandeur of the Golden Age Hollywood musical. First Man, which reteams Sandgren and La La Land director Damien Chazelle, presents the opposite challenge — reducing the mythic nature of mankind’s first voyage to the moon to something intimate, personal, and human. To do so, Sandgren eschewed the intricate, elegant long takes of La La Land in favor of an immersive cinéma vérité aesthetic inspired more by Pennebaker, Maysles and Wiseman than the sterile cosmic wonder of Kubrick.

With First Man now out in theaters, Sandgren talked to Filmmaker about the difficult puzzle of authentically recreating Neil Armstrong and company’s historic sojourn.

Filmmaker: Let’s begin with First Man’s climax, which follows Neil Armstrong’s initial solitary moments on the surface of the moon. There wasn’t a lighting source powerful enough to give you what you wanted out of a Sun surrogate. So you asked the developer of the SoftSun light, David Pringle, to create a 200K-watt bulb for you.

Sandgren: The 100K SoftSun that was already available wasn’t bright enough, and I didn’t want to use multiple 100K’s because it would’ve created crazy shadows. So I asked David if he could make a brighter lamp — and he did. Our entire Moon set was lit by that one single lamp, and we placed that lamp at the same height as the sun had been during the actual moon landing.

Filmmaker: And you only had a pair of 200K bulbs? Were you panicked that two wouldn’t be enough?

Sandgren: Well, the first 200K bulb blew up. So that was, uh, not good. (laughs) But we always knew that we had a second bulb we could work with and we did have two 100K’s just in case as a backup.

Filmmaker: How long did the first bulb last before it blew?

Sandgren: It happened on the first day. We only shot a few shots with it. We had huge fans blowing on it to keep it cool, but it blew up after just a few hours because we had the light on the whole time. It was a prototype so we expected it to be a test and that’s why we had back-up options. So we had to put up the other 200K bulb and keep it dimmed between takes to keep it from getting too hot. Later on (David) made modifications to those lamps to make them hold up better for the heat.

Filmmaker: How did you land on the right shade for the moon’s surface? It seems like that grey sand would bounce light everywhere.

Sandgren: We shot (the moon scenes) at a quarry in Atlanta and the sand in the quarry already had that grey color like the moon. I don’t know what kind of rock it was, but it was already a very realistic color. And if you were on the moon’s surface and the sun was hitting it, it would indeed create a bounce. So I believe the bounce we got was very naturalistic.

Filmmaker: The horizon of the moon drops off into this infinite void of blackness. Were you able to create that effect just by flagging off the light?

Sandgren: In the vast distance we wanted the horizon line to be pretty flat and in some directions (at our location) it was pretty flat. But in other directions you’d see hills in this quarry that we couldn’t get rid of. Those we had to paint out in post.

Filmmaker: What film stock did you use for the 70mm IMAX cameras that shot the moon sequences?

Sandgren: We shot with (Kodak Vision3) 5219, which is a 500ASA Tungsten stock, and I rated it at 400. We shot at a T5.6 stop at 30 frames per second — so we shot everything in slight slow motion. We tested in preproduction and figured out that with the bungee rigs the actors were using, a little bit of slow motion created the most realistic moon walk.

Filmmaker: And for lenses for the IMAX cameras, you used the same type of lenses that the astronauts’s still cameras employed during that first moon mission?

Sandgren: It was the same model of Hasselblad medium format lenses that they used on their still cameras. So the flares from the sun (in the movie) were similar to the photos the astronauts took with their 6×6 cameras. Since the entire film (before the moon landing) has such an intimate, handheld look, the idea was that when we got to the moon it’s the counter opposite and we’d shoot on a crane and create these very sharp and crisp IMAX images to contrast the rest of the movie.

Filmmaker: That intimate, subjective point-of-view is also used inside the various spacecraft. Most of that was shot on Super 16mm?

Sandgren: The Gemini mission and the Apollo mission interiors are all Super 16 cropped to 2.40 and it’s all 500 ASA.

Filmmaker: What were the challenges of lighting the interior of that little metal cockpit of the Gemini?

Sandgren: We went for realism. We didn’t have any other light sources (inside the capsule) other than practicals. We wanted to have the key motivated by the sunlight coming in through the window so we rigged something like a 5K Par fixture onto a scissor lift that we could move all around (the soundstage). We shot those scenes with a huge horseshoe-shaped array of LED screens that was 60 feet long and 35 feet tall. The images on those screens would give off light as well and simulate the bounced light that would’ve come from Earth. We wanted to do everything in the film as practically as possible. There’s no greenscreen, even in the space scenes. Everything you see outside (of the spacecraft) is an image on an LED screen (shot practically on the soundstage).

Filmmaker: When Armstrong (played by Ryan Gosling) first begins training, he’s strapped into this multi-axis contraption that spins him around and basically makes all the astronauts pass out. Did that machine actually work?

Sandgren: Our production designer Nathan Crowley and our special effects supervisor J.D. Schwalm actually had that built out of metal. So yes, it works. In the wider angles where it’s spinning faster, we used a stuntman. But for the tighter shots, we had the camera mounted to it and Ryan was actually in there.

Filmmaker: Did you have any problems with the film camera being flipped around when it was rigged to the machine?

Sandgren: No. We never had any problems with the film — not even scratches or light leaks or anything, for the entire shoot. That multi-axis scene was shot on two-perf 35mm. We used 35mm push processed (for scenes in the NASA environment) and 35mm pull processed for scenes at Neil’s home.

Filmmaker: Tell me more about shooting Neil’s domestic life, which takes place in this strange quasi-suburb surrounded by the families of other astronauts-in-training.

Sandgren: We used black as a metaphor for death and foreboding so in the home we often tried to have a lot of blackness — not just dark, but black. We tried to tell the story with the camera in a way that you would understand what was going on in the scene even without the dialogue. For example, there’s a scene at the kitchen table (where Armstrong explains to his two sons that he might not survive his mission to the moon) and we visually divided Armstrong from the rest of the group — his family is framed together and he is separated by this dividing wall. Because we wanted the ability to move the camera back for a wider shot like that to express solitude or loneliness, we built the set so that the openings of doors and things aligned to allow us to shoot at a distance into the kitchen or into a bedroom.

Filmmaker: You mentioned that your goal was to do as much practically in camera as possible. To that end, the credits list a model unit.

Sandgren: We built not only models but also some full scale (replicas). There’s a shot where the Saturn 5 travels through the sun and creates a sun flare — that’s like a 14-foot, very detailed and beautifully built model. When the LM (Lunar Module) and the CSM (Command/Service Module) are separating, that was done with full-scale capsules put on gimbals so that we could spin and rotate them. The close-ups of the Gemini capsule docking with the Agena also used full-scale models.

There were a lot of challenges with being in Atlanta and trying to simulate the moon and space travel. We wanted to tell the story very realistically and naturalistically and to do so we had to come up with all these tricks to make everything look as authentic as possible. We didn’t want to just rely on VFX in postproduction and greenscreen and there wasn’t one single answer for how to do that. It required different solutions for different situations. It was a puzzle — a very complicated puzzle.