Victims of the Dance: Gaspar Noé Breaks Down a Scene from Climax 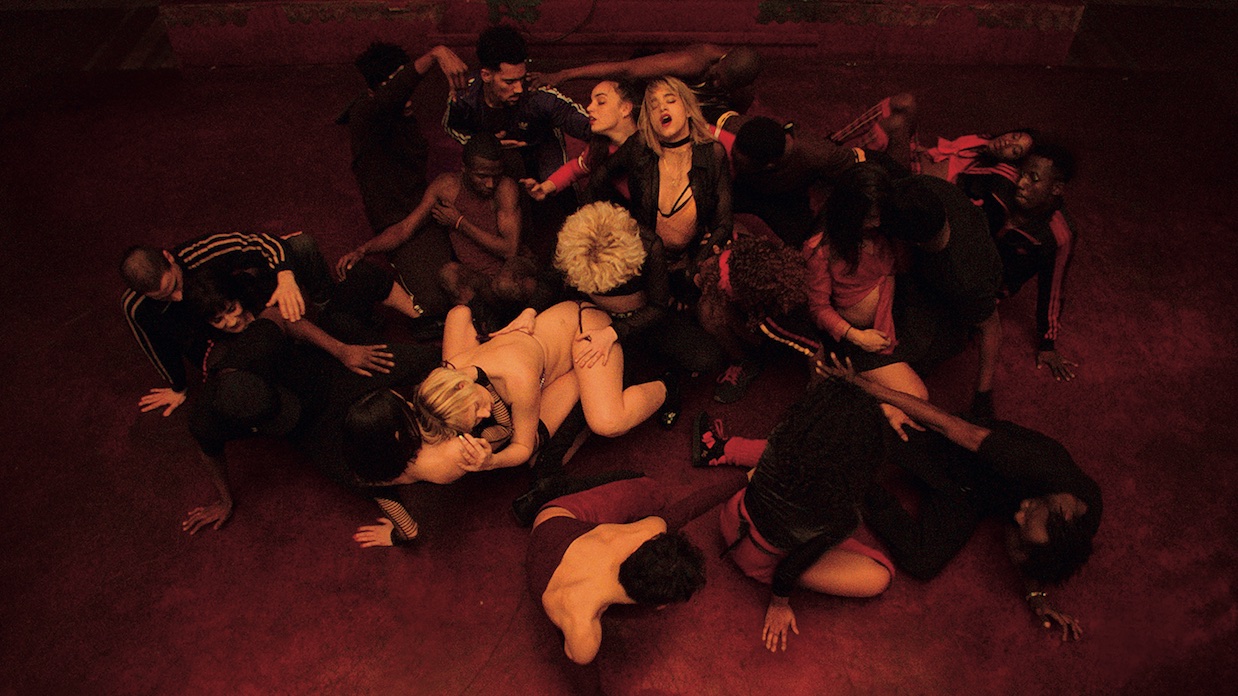 “Birth is a unique opportunity.
Death is an extraordinary experience.
Life is a collective impossibility.”
–CLIMAX (2018)

The film
A dance company celebrating the end of their rehearsal on a snowy night in 1996 lose themselves to bacchanalian depravity in Climax, divided into two parts, each shot in long, continuous takes. The latest from Gaspar Noé, the director of Enter the Void and Love, returns to themes of his greatest dreams turned into nightmares through the hypnotic expressions of dance — and some surreptitiously drugged sangria.

The scene
The scene is a six-minute excerpt from the 42-minute-long continuous shot that makes up the second part of Climax.

Gaspar Noé: “At the beginning of the sequence, the dancers are starting to suspect that the sangria they’ve been drinking was spiked by another company member with some kind of drug. They all start to turn totally paranoid and aggressive — everything that was good starts to go wrong. People are starting to react with their reptilian brain, their primal brain, rather than their thinking brain. All anyone is concerned about is survival and that depends on figuring out who drugged them.”

One character who has not had the drink is Lou (Souheila Yacoub). That’s because she’s pregnant. Another dancer, Dom (Mounia Nassangar), attacks Lou, punching and kicking her in the belly, thinking she’s only pretending to be pregnant.

Noé: Many people have told me that when that happens the movie goes from being a musical comedy to a kind of horror movie.

The other dancers — also crazy from the drugged sangria — form a mob, demanding Lou prove she’s pregnant by inducing a miscarriage. That’s when Lou takes a knife and slashes her face and her wrists. It’s here that another dancer arrives, Sofia Boutella’s Selva. Horrified by the scene she’s walked in on and overtaken by the drug, she freaks out, channeling her hysteria via a dance. The sequence ends with her seeing her reflection in the mirror and screaming.

PRE-PRODUCTION
A French production and proud of it

For Noé, creativity lives in paradox: Serious art is born out of serious play. His distinctive filmmaking style isn’t the result of maintaining a tight grip on creative control as much as it is surrendering to circumstance, chance and the collaborative, lived experience of making a film. He says his greatest pleasure lies in having written and prepared nothing in advance and allowing the dramatic tension of the film to be drawn, as much as possible, from what’s happening in front of him. Climax, Noé says, is his most collectively created film yet.

To help facilitate this kind of experience, Noé laid out certain guidelines. The script simply outlined the beginning, middle and end. It was a purely descriptive document, free of any written dialogue. The particulars of the story and the details of the characters would evolve on set. The only choreographed scene would be in the beginning, and the rest of the dancing would be improvised. The film was designed to be shot over a short, 15-day schedule.

Producing a movie under such parameters is a risky business, line producer Serge Catoire explains. “You have to have complete confidence in Gaspar and trust his process if you’re going to let him wait until the very last minute to make these key decisions,” he says. “It was crucial that I managed the production in such a way that shooting was on task without compromising Gaspar’s vision. I needed to construct a square, inside which Gaspar could be free.” In fact, this sequence, which Gaspar calls the film’s hinge, could not exist without the willingness of the cast and crew to embrace “crazy propositions.” Souheila Yacoub (Lou) was cast a day before the start of the shoot, one of two professional actors to appear in the film.

At the start of the film, Gaspar includes an intertitle that presents the film as “A French Production and Proud of It.” It’s his way of saying, “Only in France could I make a movie with this kind of freedom.”

The only scripted part of the sequence is when a dancer’s hair catches on fire.

Catoire says the script was more a tool used to explain the basic concept of the project to the cast and crew. The actual narrative would be written through “lived experience.” During our interview, sound designer Ken Yasumoto says that the script includes descriptions of conflict but not exactly as it happens in the film. “There is no ‘Dom’ or a woman getting kicked in the belly,” he says. “In fact, all the characters have different names.”

“Most of the things that happen in this movie come from the dancers themselves,” says Noé. “I didn’t insist that they say something I had prepared beforehand or ask them to say or do something else to make the film better. They were free to choose how they wanted to portray insanity. It was like I was captain of the football team saying, ‘Yes, take it! Run with it!’ to my teammates.”

After each take, Noé would invite cast and crew to give feedback on the sequence. “We had a little workshop on set with a huge TV and after each take, Gaspar would play back the picture for everyone on set,” Catoire explains. “Doing so was a way of motivating and inspiring. It gave everyone the energy to do the next one.”

The only choreographed dance in the film is the number the company is rehearsing, which you see in the very beginning. Selva’s demonic dance was entirely improvised.

Noé used a handheld camera, so he could adjust the shot in response to dancer Sofia Boutella’s movements. Choreographer Nina McNeely stood next to Noé so she could help Boutella channel the “psychotic energy” into her dance. “If you listen to the production sound, you can hear Nina’s voice, so technically speaking, it was not easy to erase,” Yasumoto says.

Another complication was that Boutella couldn’t hear the music in the corridor where she was dancing from the room with the sound system, so a grip had to follow her around holding a speaker. “When you do this kind of improvised dance, especially a psychotic improvised dance, you need the music to be very loud to be in a kind of particular mood,” Yasumoto says.

All the dialogue and audio from this scene were reproduced in post.

For this scene, Noé tasked Yasumoto with creating a mix in which you could hear both the music and a few specific lines (“She’s pregnant!” “Stab yourself! Stab yourself!”), which was impossible with the production audio because it was a mess of loud music and indecipherable shouting. So instead, he had to recreate it in post-production. He assumed this would be difficult, but the dancers surprised him. “It’s really not easy to act when you’re in a studio alone with a microphone in front of you,” Yasumoto says. “You have to manufacture the mood that was on set. You’re not in the real mood, but the fact that we knew each other and perhaps because they were dancers and not actors, so used to expressing with their bodies, they expressed themselves well. They were really good at it, and it created something quite scary.”