“It’s Like Having a Diary Shot by Someone Else of Moments That You Don’t Remember….”: RaMell Ross on his Oscar-nominated Hale County This Morning, This Evening 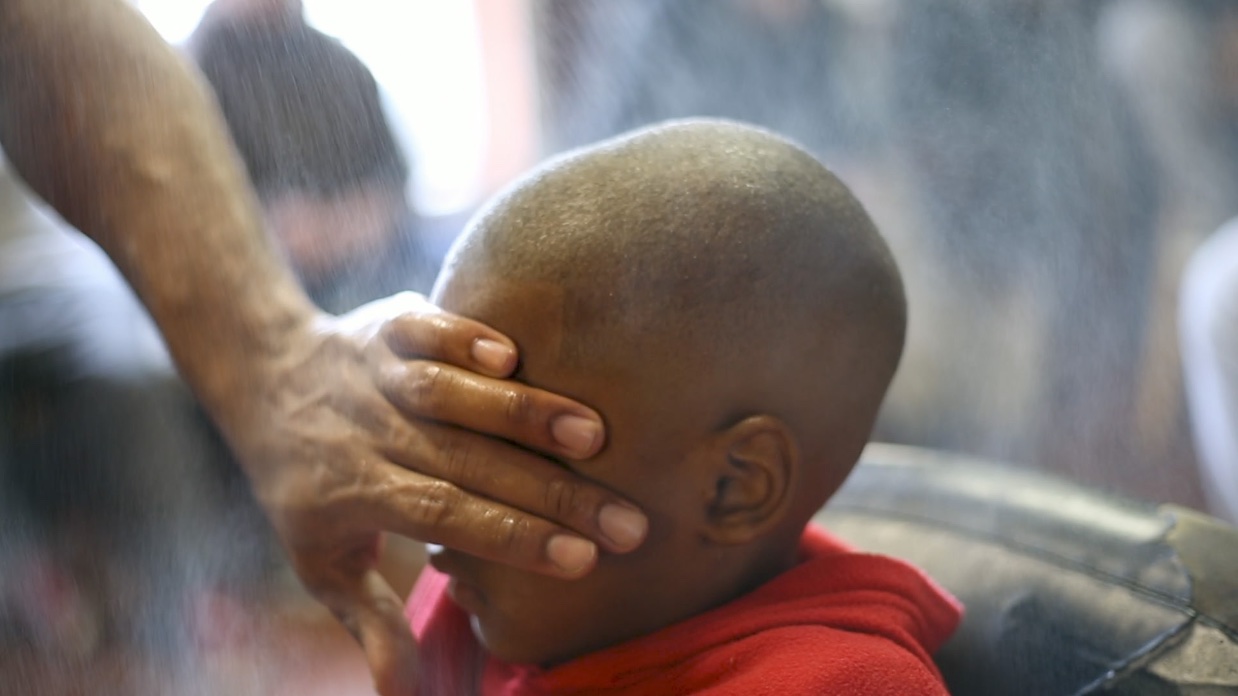 by Lauren Wissot
in Directors, Interviews
on Feb 8, 2019

Nominated for the Oscar for Best Documentary Feature, and airing on PBS’s Independent Lens beginning February 11th (and now on iTunes), RaMell Ross’s Hale County This Morning, This Evening lives up to its buzz and then some. The award-winning photographer’s debut feature is a low-key, highly cinematic look at the Alabama Black Belt over a period of five years. In that time Ross trained his lens mostly on two twenty-something men, Daniel and Quincy, as they navigated education, blue-collar labor, fatherhood, and just the intricacies of daily life in their culturally rich, economically impoverished Southern town.

Filmmaker was fortunate enough to catch up with Ross, a “25 New Face” of 2015, during this year’s Sundance, where his short Easter Snap celebrated its world premiere.

Filmmaker: So I actually saw your film at last year’s CPH:DOX, and I noticed you’ve got Charlotte Cook on the filmmaking team along with other industry heavyweights like her Field of Vision colleague Laura Poitras. Also Joslyn Barnes and Su Kim. Can you discuss how all these folks came onboard — including your creative advisor, Apichatpong Weerasethakul? Do you know him personally?

Ross: Actually, one of the biggest breakthroughs for the film was meeting Joslyn Barnes. She worked with Apichatpong on Uncle Boonmee. She knew what I wanted the film to look like. I had a whole bunch of the footage, and I was making all these cuts and edits. She was like, “You know, I really think Apichatpong would appreciate this film. I think he would like it.” And I was like, “Uh, whatever you say.” I’m just happy that you’re talking to me, Joslyn. And he really loved it. And then she asked if he would consult with us, could we send some edits and see what he thought. And then we just did that. I’d never met him before.

Filmmaker: And at what stage did all these other topnotch filmmakers come in? How did that work?

Ross: I want to say that I so deeply appreciate Joslyn and Laura Poitras and all of them. I showed them some of my footage, and they were immediately like, “I’m in.” They got it — the way in which I talked about the film being about blackness, about the film being a Rorschach test of the black experience. It’s all about the interstitial, that’s what’s interesting and that’s what cinema is anti because of how this relates to racism and individuality. They all just looked me, like, dead in the eye, and were nodding and were like, “Yes, I get it, I’m in.”

The funding process before meeting them was impossible because no one got it. Everyone was like, “Well, what about the characters? And what about these things?” It was, I think, 2015 when I met Joslyn at Sundance, and then I met Laura Poitras at an edit lab in 2016. I just showed her a 56-minute cut and she was in. So Field of Vision joined, and they gave a lot of feedback on the edit a couple times. Jos was in the edit room and is responsible for actually shaping the film.

Filmmaker: Honestly, to me the film feels very European. I don’t know what your response has been like overseas, but I’d expect it to be very welcoming.

Ross: Well, it’s strange. It’s strange ‘cause there’s still a core resistance to it. I think there’s still this fundamental unwritten rule of “objectivity” that journalists are expected to have, but maybe not.

Filmmaker: You’ve said before that you wanted to make a film about “black Southern folk existing.” That to me is very European. A film about people existing. If you pitched that in L.A., I think it would be a hard sell.

As far as the European thing, we didn’t get into Berlin. While the film is really visual, it’s also distinctly and intentionally American in dealing with the Antebellum South. So I think European audiences love the aesthetics. And they sort of took the way in which the community is represented in Hale County and applied that to the grander disenfranchisement or marginalization of those who are considered “others.” Outside the wider, white, euro-centric society.

So I think there was a little hesitancy that people wouldn’t connect enough with it abroad. I thought that it would be a lot warmer. It was warm, but it’s been the warmest here. A lot needs to be explained. They’re like, “So why the Antebellum home? Why show the blackface guy?”

Filmmaker: You’re up for the Oscar now, which is pretty amazing. How are your characters down in Alabama reacting to all this?

Ross: It’s kind of a frenzy. A reporter went down to Greensboro recently, just started interviewing people and making the story, “Alabama town nominated for…” It’s just so unexpected. Because creative, mainstream work — outside of maybe 12 Years a Slave — it’s not made about the South. So everyone cannot believe that the name Hale County is popularly to be shared in a positive way. It’s known for being a place where 60 to 75, 85 percent of the people are on, like, government assistance. It’s known for all of these other things, and everyone’s like, “Yeah, we’re being seen.”

Filmmaker: Has their reaction changed since they first saw the completed film? I’m guessing they didn’t think it’d be up for an Oscar.

Ross: Oh my God, no. Definitely not.

Filmmaker: What was their reaction when they first saw it? Did they have any issues with it? Were they happy? Maybe confused?

Ross: It’s a very different type of film, and they are still kind of floored by what the film actually is, and the way in which it shows them in the space. I basically spent five years filming with these guys, so for them it’s like having a diary shot by someone else of moments that you don’t remember, from a perspective that you don’t have, and a beauty that is unfamiliar. And it’s being elevated to the same space as BlacKkKlansman and Moonlight.

It’s such a leap from the daily life of a 2,000, 2,500-person town. They don’t even participate in the same media landscape that we do. It’s different there. I know they’re floored and love it, but, I don’t know. I think maybe in four or five years they’ll be able to really, like, find the language.

Filmmaker: I always wonder how characters in documentaries feel about their representation onscreen, and that’s one of the first questions that came to mind after watching your film. I thought that maybe they were surprised, that they might have expected something more straightforward.

Ross: It’s strange for them because we shot for so long that at some point you’re not making a film. So they never, ever asked to see the footage. I never showed them any of the footage. It was more about spending time together as much as it was about shooting. So I’d spend time and we wouldn’t shoot. And sometimes I would try to shoot everything. It’s really surprising for them, I’m sure.

Filmmaker: Are you there with another project you’d like to talk about?

Ross: Yeah, we have a film in the shorts section. It’s called Easter Snap. And it is, it’s sort of a deep-dive into, uh, I just call it the hog, the hog-killing process or whatever, but —

Ross: But that’s not what it’s about. That’s sort of just the catalyst for the moment. It’s about something that happened while I was shooting Hale County. But one of the rules for Hale County was no scenes, only shots or moments. But the whole day, this 12-hour thing was so insane I was, like, we have to just make a film out of this.

Filmmaker: I don’t know if I can watch that. You’re talking to a vegetarian.

Ross: I’m a vegetarian as well.

Ross: Yeah, I mean, I shot it. It’s crazy. But I don’t show the hog being killed. I would say it’s really the hog processing, to make it more palatable.

Ross: Or we can just say “sending the hog to heaven.”

For more on Hale County This Morning, This Evening, read in our Anatomy of a Scene column Ross, Barnes and cowriter Maya Krinsky breaking down a scene from the film.