“I Love Just Using a New Language”: Robert Rodriguez and STXSurreal’s Rick Rey and Andy Vick on the Virtual Reality Film The Limit 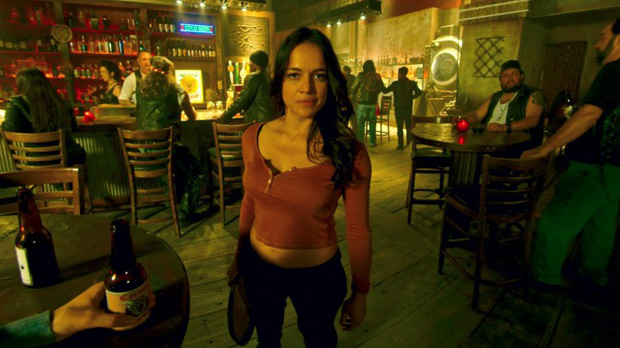 Michelle Rodriguez in The Limit

by Randy Astle
in Directors, Filmmaking, Interviews
on Feb 27, 2019

Since 1895 films have had at least two distinct advantages over live theater: the ability to be reproduced and watched at times and in places where the action did not actually take place, and the ability to direct the audience’s attention to precisely what the filmmakers desired. Conversely, after more than a century of cinema’s evolution, these have become precisely the reason that theater remains vibrant: it’s live and it’s present, and audiences can look wherever they want.

Now virtual reality is mixing these experiences in a new way. While still prerecorded and edited (generally), it expands the audience’s range of view outside a rectangular screen to include a full 360 degrees in all directions. This has proven ideal for immersion and films like documentaries that place viewers in the middle of new environments, but it often presents problems for fictional filmmakers who still wish to guide viewers’ attention to follow a story or not be disoriented by simple cuts between shots, as well as for viewers who may be wondering if they’re looking in the “right” place to get the most out of the experience.

The Burbank-based VR company STXSurreal is positioning itself to solve that problem by embracing the immense depth and scope that VR offers while limiting it to a certain field of view. With their “Super Surreal” format, viewers can don a headset and sit back on the couch rather than stand or sit in a swivel chair; wherever they can comfortably turn their heads will be within the range of the action, but there’s nothing behind them so they don’t have to constantly worry about actually pivoting in case they’re missing anything. While a far cry from the close ups and editing techniques of traditional cinema, this does return a degree of directorial control to virtual reality storytellers while bringing the production process into closer alignment with traditional filmmaking practice—and it arguably makes for an easier viewing experience as well. Incidentally, along with improvements in headset ergonomics, battery life, and ventilation, it should also allow for longer films than is typical now, moving VR films closer to the lengthy gameplay that many VR games now encourage.

To launch the technology to the public, STXSurreal teamed up with Robert Rodriguez, a filmmaker who’s always looked for ways to incorporate new technology into his work, as his currently playing Alita: Battle Angel (and a related two-hour live immersive experience) shows. The result is The Limit, a twenty-minute film that premiered on all VR platforms late last fall. Rodriguez and his team, including his son Racer Max as screenwriter and Michelle Rodriguez and Norman Reedus as stars, produced a film that contains all the action and firepower Rodriguez’s fans have come to expect, but reshaped it into a completely new package. Most notably, the film is shot in a first-person perspective, drawing on years of first-person shooter gaming to place the viewer directly into the action as a participant rather than a viewer. This opened up new storytelling possibilities unavailable for traditional flat screens, even, as in Alita: Battle Angel, Spy Kids 3-D Game Over, and The Adventures of Sharkboy and Lava Girl—in 3D.

I asked Rodriguez to describe how the new technology influenced his creative process.

Rodriguez: The format totally influenced the storytelling. It allowed me for the first time to tell a believable first-person story, with all the wish fulfillment that comes from that.

It works much better in VR to do first person than in traditional movies or TV. You can really believe it’s you immersed in the story because you have freedom to move your head around and see different things.

Besides the POV storytelling, I also love just using a new language in general, and designing a story that is immersive and a lean back experience, one where the audience has freedom of movement and can choose where to look, but at the same time you want to direct them as well to see and hear what you want them to in order to get the most out of the film.

The camera gear was very different, and you couldn’t rely on editing and lenses to get you into the drama, so it had to be sold by the actors and the staging. Which is why it was really a necessity to cast great actors who could sell that they were looking at you and talking to you.

I really enjoyed working with Michelle and Norman to find that right balance. It’s all so experimental, which is super fun. You’re on uncharted waters. I couldn’t really plan even simple things, like how close the vehicles should get to each other until we were there on the day and I was looking through the camera, because the lens is very wide.

It took creating some new visual language to sell the idea, especially in the editing and transitioning from scene to scene and shot to shot so that the audience wouldn’t get lost.

But that’s also what makes it fun, trying to pioneer some new ways to tell a story.

Which  is why on a production like this, that had to move so fast, it really helped and probably was only achievable because I wear many different hats. Having to coordinate so much on the fly between writer, director, director of photography (the lighting is very tricky and much more limiting), editing and VFX was much smoother because I do all those jobs on this.

Rodriguez was aided on the producing and distribution side of the project by Andy Vick, Rick Rey, and their team at STXSurreal. The duo started the VR company as Surreal, where they produced dozens of small-scale immersive projects before being purchased by STX Entertainment in 2016. With several years of experience they’re now ready to push into this hybrid space and hope to position their company as an industry for cinematic VR. Last April they announced a production slate that beyond The Limit also includes comedy and action projects from Kevin Smith, Ed Helms, Dave Bautista, Peter Berg, and John Wick screenwriter Derek Kolstad. Here’s what they told me about their company, producing and distributing The Limit, and the current and future state of virtual reality filmmaking:

Filmmaker: Your company has been moving toward cinematic VR since before STX acquired Surreal in 2016. How did the concept for The Limit begin—did you approach Robert or did he come to you?

Rey and Vick: We were introduced to Robert while he was working with STXfilms on the animated movie UglyDolls. We presented him the concept of producing a live-action VR movie in a new ultra-wide VR format that we’d been developing. Robert has long been interested in innovative filmmaking techniques and was intrigued by the idea. He pioneered the use of 3D technology on Spy Kids 3D: Game Over in 2003, and on Sin City in 2005 he was one of the first to shoot an entire film on a digital backlot in front of a green screen. He credits his son Racer Max Rodriguez, a fan of virtual reality video games, with sparking his interest in the world of VR. While he was shooting with Michelle Rodriguez on the set of his film Alita: Battle Angel, he asked her if she would like to be involved in a VR project. They brainstormed character and action scene ideas, and then Robert and Racer wrote the script to The Limit together. Then before production we performed a series of camera tests because the project called for a number of intense action scenes that hadn’t yet been attempted in a live-action VR experience.

Filmmaker: You mentioned the ultra-wide format. Can you describe that?

Rey and Vick: The Limit is presented in a unique virtual reality format we developed that we’re calling “Super Surreal.” It is wider than half-dome and projected in a fully immersive virtual movie theater environment. Super Surreal bridges the gap between traditional 16×9 and 360 storytelling into a more comfortable viewing experience (no stretching your head back and wondering where you should be looking), it offers a higher quality image than 360 video, and it allows filmmakers to translate their traditional techniques more seamlessly into an immersive medium. We think it will be the de facto VR movie format.

Filmmaker: I’m curious about why you teased the film at MIP TV rather than a traditional film festival (besides the fact that it wasn’t yet completed). What relationship will television production companies, or even video game developers, play as partners in your future productions?

Rey and Vick: It was really a perfect storm of MIP TV looking to grow their VR programming and us being in post-production on The Limit. When MIP TV heard what we were working on they were immediately interested, especially given Robert’s involvement, and we felt that their broad mix of international press and media executives would be an ideal audience to showcase some early footage of The Limit and share STXsurreal’s plans for the future.

Filmmaker: Since then STX has described The Limit as the most widely distributed VR film to date. Tell me about your distribution strategy and the film’s rollout since November, again going straight to a wide release rather than premiering at a festival like Sundance New Frontier.

Rey and Vick: We wanted to get The Limit in front of the most people at the same time as possible to maximize our marketing and press campaign that we put behind it, which is similar to the STXfilms strategy for their releases. We developed multiple apps for major VR platforms so The Limit was available to a wide audience across VR platforms day and date.

Filmmaker: I’d like to ask about monetization, because one huge impediment to the widespread of VR films, even more than games, is getting profit to content creators. A production on this scale obviously has a sizable budget, so how have you addressed monetary issues with the $10 purchase price and in working with your production partners?

Rey and Vick: The goal from day 1 was always to monetize this, and we did a lot of research to come to a price point that speaks to the talent level of the production while still feeling like a value to consumers. Our EST model speaks to this, and we’re continuing to develop more ways to distribute and monetize our content outside of the home market.

Filmmaker: You’ve announced several upcoming productions. What are you particularly excited about? I’m also curious about your current plans for your own Surreal VR channel.

Rey and Vick: We were excited that 30% of commenters reviewing The Limit expressed a desire to see more VR films like it.  It’s very promising that our audience is telling us this unprompted and is championing what we’re doing. So, while we’re not yet ready to announce our next project that will be released, you can expect the same caliber of director and cast that we’ve been working with.

Filmmaker: On a technical level, it sounds like these upcoming projects continue with the similar range of view, but what about the first-person perspective that The Limit employs? Do you have any ambitions for a cinematic VR film like this that includes room-scale six degrees of freedom? What else do you hope to see VR films achieve?

Rey and Vick: All of our projects are being developed for the Super Surreal format. After producing over one hundred 360 videos we felt that we understood the strengths and weaknesses of the format. 360 video is good for experiential content and events, but we think it doesn’t lend itself to certain types of narrative cinematic experiences. Super Surreal allows us to deliver an experience that does justice to the creative vision of our filmmakers.