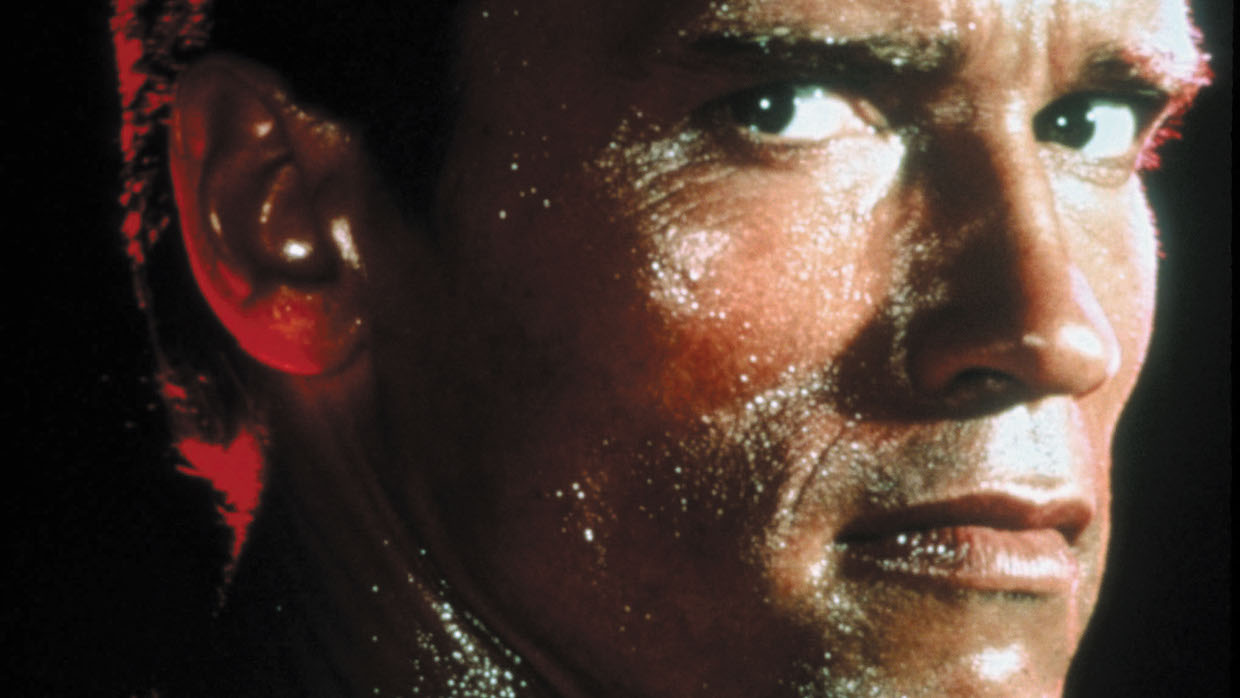 Arnold Schwarzenegger in The Running Man (courtesy of Olive Films)

The artist David Levine once staged reenactments of memorable film scenes at their original locations in Central Park. A performer ran laps around the reservoir in a nod to the opening of Marathon Man, while stand-ins for Jack Lemmon and Sandy Dennis acted out the Cracker Jack scene in The Out-of-Towners by the Trefoil Arch. Scenes from The Royal Tenenbaums, Symbiopsychotaxiplasm and Portrait of Jennie, among others, were underway elsewhere in the park. The performances were unmarked, and some were more discernibly theatrical than others. Period clothes or the spectacle of a confrontation played and replayed in intervals could tip off a casual bystander. Some performances attracted crowds; others, like the actors performing Sarah Michelle Gellar and Selma Blair’s parts in Cruel Intentions, I encountered as an audience of one. That scene, on a picnic blanket by the pond, ends in a kissing lesson. As I stood before the performers, I felt at once as though I had breached a “Private Moment”—the title of Levine’s piece—and that I was inside the terms of the 1999 movie, having encountered this version in its physical location.

Experiencing a similar uncanny sensation while watching Akira, The Running Man and Blade Runner shortly after the new year began, I was reminded of Levine’s piece. These films—two classics, one kitsch—were released in the 1980s, but all three were set in 2019. The filmmakers wondered what the world would be like, but I’m already here. Science fiction about the future is, first and foremost, a comment on history and the present. And yet, a leap in time inevitably poses a challenge: this could be. A film set in a specific year in the future therefore sets an expiry date for its array of predictions.

Perhaps it was difficult back then to imagine a year without the number “19” in it. Whatever the reasons Katsuhiro Otomo, Paul Michael Glaser and Ridley Scott all arrived at 2019 as a chronological setting, it was sufficiently far away to project wild speculations. A baby in the ’80s would be a thirtysomething in 2019; wouldn’t the world change as much?

Shiny compact discs and boxy televisions now pop out as dated details in the films, but certain themes have never lost relevance, like the plaintive depiction of losing one’s identity in Blade Runner and Akira’s cautionary visions of how technological progress easily morphs into unruly, intractable problems. The Running Man, an unserious The Price Is Right–punk yarn about television as sadism, might have seemed dated the minute after its release, but its absurdity is on pitch with the shrill madness of our modern media influence. There’s no better example than our very real reality TV president; also, the star of this film—Arnold Schwarzenegger—was elected governor of California 16 years ago (16 years after The Running Man was released.)

The look of the ’80s is distinctive and recognizable—even its visions of the future include leg warmers and neon lighting—but nowadays, decades are experienced with less dramatic changes in aesthetics. Writers like Simon Reynolds and Mark Fisher have commented on how late capitalism manifests in the current stasis of fashion, music and other cultural markers. Children of Men, Alfonso Cuarón’s 2006 film set in 2027, is a perfect example of this endless present or neverending past of culture. What’s eerie about the film is how little about it looks dated now. It is likely that by 2027, the film will appear just as contemporary and plausible. Its persisting relevance, before and after Brexit, is tied to the banal nationalism and workaday anti-immigrant brutality of its premise. The authoritarianism in the film “could have been implemented within a political structure that remains, notionally, democratic,” Fisher wrote, commenting on the film in his book Capitalist Realism.

Of course, George Orwell set a standard for skipping ahead three decades when he wrote 1984 in 1948. That clock-strikes-12 sensation of inhabiting the present of a past depiction of it is the basis of Michael Radford’s adaptation, which was released in theaters that year. His 1984 is another inert culture—a world that never advanced past 1948 but instead chugs in a circle of mechanical joylessness, where the squalid aesthetics of tomorrow and yesterday are one and the same. The tension between the uncanny and real, and the old and slightly advanced technology, is heightened by Roger Deakins’s facsimile of aged photography. There is a palpable Cold War hubris to 1984’s 1984, reassuring British and North American viewers of their Free World citizenship, but in April 2017, almost a hundred theaters around the United States screened the film in a coordinated protest of the election of Donald Trump. Relevance can surface at any time.

The joy of watching Akira, The Running Man and Blade Runner today is one of a long list of departures from 2019’s reality—no one’s killing humanoid robots, game shows aren’t death sentences, and no telekinetic children are blowing up cities. A longer list might comprise all the real missed opportunities from the ’80s contributing to the dystopia of the now, from policy failures like “welfare reform” to lack of action on climate change. These visions of this year from the past left me with something adjacent to nostalgia: longing for a moment when 2019 was undefined.