“What I Discovered Was a Unique Bond Between Man and Dog…”: Heddy Honigmann on Buddy 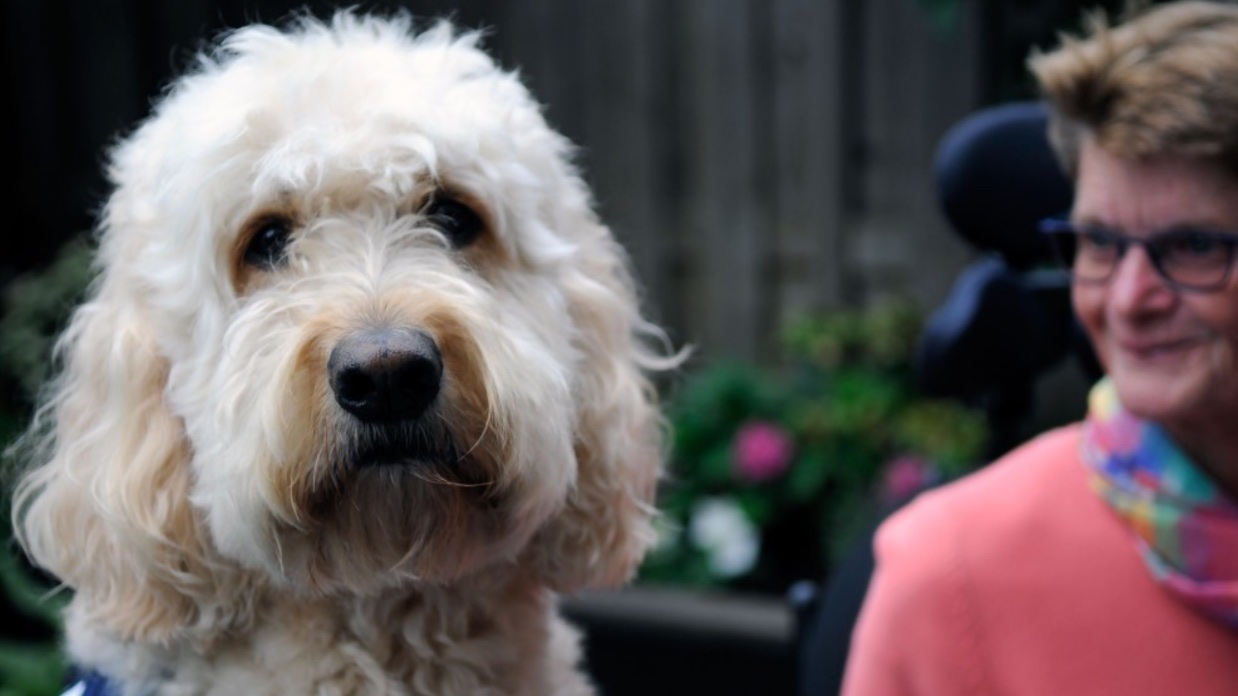 by Lauren Wissot
in Directors, Interviews
on Mar 20, 2019

For over 30 years the globetrotting Dutch filmmaker Heddy Honigmann has been wowing audiences the world over. Born in Peru to Polish Jewish parents, Honigmann’s been honored with retrospectives at the Centre Pompidou in Paris and also at New York’s Museum of Modern Art, where her latest work of cinematic nonfiction Buddy closed this year’s Doc Fortnight. A heart-soaring tearjerker, the doc is an exquisite portrait of the lives of six guide dogs and their owners. But because it’s a Heddy Honigmann film it inevitably transforms into a philosophical meditation — in this case, an exploration of the love affair between mankind and its best friend.

Filmmaker: Your body of work is truly exceptional in so many ways, not least when it comes to diversity of subject matter. You’ve tackled themes ranging from sex to death to war — and now, with Buddy, the bond between animals and humans. So why decide to make a doc about guide dogs and their owners — and how do you choose the topics for your films in general?

Honigmann: You mention diversity, and in my case, diversity has to do with coincidence and repetition. I remember many colleagues asking me, “Why don’t you make a film about Lima?” Well, my answer was that it was very difficult to make a film about the place where you were born. I missed a strong film idea.

But then once while visiting Lima I saw a man putting a sticker on his car window that read “TAXI.” He said goodbye to his wife, got inside his car and started to drive. I hailed him over. Once inside, after I’d asked him, he said he operated his car as a taxi on his way to and from his office to make extra money. That’s how the idea to make Metal and Melancholy was born. Because of a devastating economic crisis, many middle-class people had lost their jobs and were transporting people to make money. You just had to stick a “TAXI” sticker on the window of your car and you were a cabdriver. There was no control at all, not even when it came to whether or not you had a driver’s license. We found some housewives, an accountant, an economist, a police agent, the ex-owner of a shoe factory, etc., all behind the wheel of a cab. That idea became a film.

For Buddy, I was watching a commercial about guide dogs. There was a dog helping an ex-soldier with PTSD. A while ago I made a film, Crazy, about soldiers with PTSD in Cambodia, Rwanda, and the former Yugoslavia, and how music influenced their memories about war time. Now I began researching these dogs that are educated in helping people suffering from autism, physical disabilities, blindness, PTSD, and what the relationship with their bosses/humans were. What I discovered was a unique bond between man and dog — a bond revealing solidarity, friendship, and yes, also love.

Filmmaker: You also follow a wide range of characters, including an elderly blind woman, an autistic boy, and a soldier with PTSD, to name just three. There’s such a vast array of ages and disabilities (and dog breeds, for that matter) represented. So how did you choose whom to document? Were there characters left on the cutting room floor?

Honigmann: My researcher Monique Lesterhuis and I consciously decided not to choose a specific illness and show how the dog coped with it. The characters we left out of the film were dogs that were still being trained. We saw that the training of the dogs was a different film, telling a different story than the emotional one that came through when we focused on individual cases. The individual case revealed friendship, solidarity and love between human being and dog in very different ways. We decided that should be the core of the film, so that’s what we focused on.

Filmmaker: Music seems to play an important role in all of your films. How did you decide on this particular classical score?

Honigmann: This is the fifth film that composer Florencia di Concilio, who lives and works in Paris, and I have worked on together. Our cooperation is always very spontaneous. There has never been an overall theoretical idea about how the music should be in our collaborations, but there are always a few scenes that we agree should feature particular instruments that can tie in with the narrative. In the case of Buddy I knew that the film would end with a scene where the character rests after running with her dog and listens, peacefully, to a classical piece of music by Schubert on piano. So the rest music in the film had a lot of piano tunes.

Filmmaker: You have this amazing ability to walk the line between respect and access. By that I mean that over and over, without pushing or prying, you’re able to get the folks you film to open up emotionally in astounding ways. So what’s your secret? Is this something that just comes naturally, or is it a well-honed skill?

Honigmann: It really just comes naturally — and is absolutely related to my genuine curiosity.

Filmmaker: Since we’re supposedly in a “golden age” for nonfiction filmmaking I’m also curious to hear how the documentary landscape has changed throughout the decades you’ve been working. Do you see more of an international audience for your work now? Do you find it easier to get funding?

Honigmann: Within the genre of documentary film, filmmakers have been given a great deal more freedom in the last decade. It bothers nobody — I hope — that fiction elements now combine with pure documentary elements. This creative freedom is only positive.

Even though I have had an international audience for a long time, this has no effect on the funding one can get in the Netherlands. Alas, in our country, there is no respect for what you have achieved in your past. It’s a big pity.