Wong Kar-wai on Screenwriting, Patience and His Next Feature, Blossoms 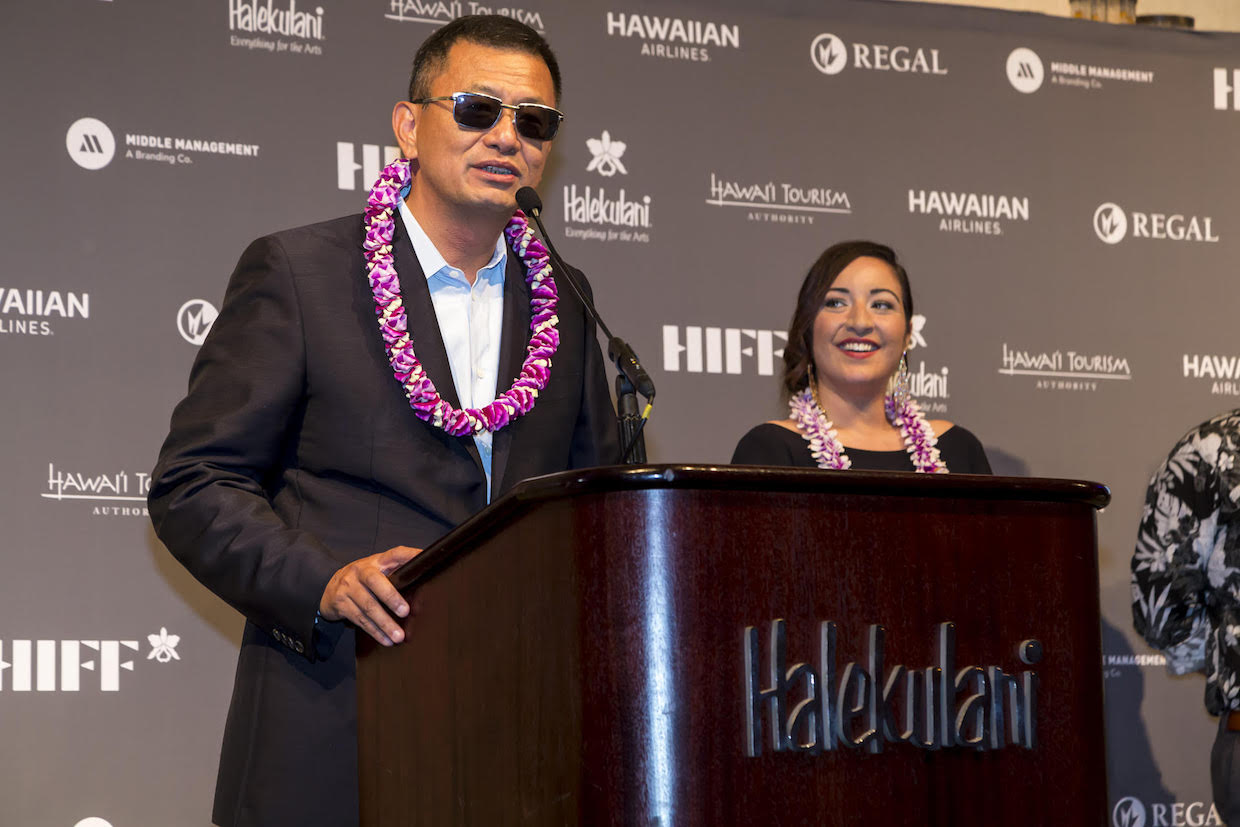 by Jason Sanders
in Directors, Festivals & Events, Interviews, Screenwriters
on May 1, 2019

A debate over power napping (“Hong Kong people have never even heard of that!”) proved least of the memorable things covered by Wong Kar-wai during his appearances at this past winter’s Hawaii International Film Festiva Taking time off from introducing films, appearing at the festival’s gala, and touring the island with his wife (and celebrating her birthday), Wong was kind enough to sit down with Filmmaker one leisurely Friday afternoon, amidst the becalmed tropical surroundings of Waikiki’s Halekulani Hotel.

Born in 1958 in Shanghai, Wong “was born in a generation where watching films was the main entertainment for kids. You could have sports, but there was no TV, of course no computer games, so to go watch a movie was a big deal. Cinema was a dream, an escape, something you wanted to explore.” Moving as a child with his family to Hong Kong, Wong was introduced to the cinema through his mother, who often took the young boy to the movies. After later graduating from Hong Kong Polytechnic, he began a career as a screenwriter for first television and finally films, where he met and worked with one of his first influences, legendary director Patrick Tam. (Tam’s 1980 wuxia film The Sword and 1982’s Leslie Cheung-starring, youth-adrift piece Nomad helped announce the Hong Kong New Wave.) “Most of the time, directors are crazy about images or the story,” Wong recalled. “I think [working with Patrick] was the first time I worked with a filmmaker [who introduced] the concept and value of the form of the cinema. To tell a story in a certain way, you need to have a form, and form should go with the story; it’s like putting the right jacket on the right body. This is something I learned from him.”

Wong worked on the script for Tam’s Final Victory (1987) for nearly two years, earning a Hong Kong Film Award nomination and a chance to direct with 1988’s As Tears Go By. His transition from writer to writer and director, though, made Wong even more notoriously late with his finished products (author/critic John Powers memorably refers to him as “the Usain Bolt of delay”). Asked how someone who started out as a screenwriter could become infamous for his difficulty in finishing a script, Wong first simply smiles and replies, “Yes, [I used to be a screenwriter]! That’s why I hate it! The reason I write is because I want to make films. When I was a writer, I always wanted to make sure the script reflected the way I wanted to see the film. That means you have to start figuring out how the film looks like before you start writing. Most writers don’t need to have this picture [or] go through this experience, but for me, I have to start making the films before I start writing. When you look at my script, you can basically tell what the film will look like. That’s why it takes so long.”

Wong’s actors have long since given up ever seeing a scenario far in advance. “Ha, yes, there’s not enough time. It’s always a work in progress. Quite crazy, really,” he notes with a grin. “If they know the script, which is the normal situation, they can prepare, but it doesn’t mean it will be good for some of them. At a certain point, going without any preparations can bring you something amazing. Because they are all good actresses and actors, sometimes a little surprise will be good for them.”

Asked which of his cast stood out for their comfort (or lack of it) with Wong’s off-the-cuff aesthetic, Wong politely demurred singling any out, and instead focused on nearly all of his major collaborators. “I believe that most of the cast that I work with are quite good, because I was very lucky to work with Tony (Leung Chiu Wai), Gong Li, Maggie (Cheung). They are all such amazing actors. Our collaborations have been very organic and fun. I always told them, ‘Don’t worry, because I will be your safety net. Just jump. Just do something that you normally won’t do. We want to see something exceptional.’ Because for them, as actors there’s always a sense of insecurity. They don’t know, if they do something crazy, something exceptional—would that be appropriate? If you say ‘Don’t worry, I’ll catch you, jump off our working experience and our collaborations before,’ I believe they feel much more relaxed in a situation like this.”

All Wong’s films are slated to receive brand-new 4K restorations and will be re-released as part of a touring package sometime in 2020. Wong’s own studio, Jet Tone Films, is behind the restorations (Janus/Criterion will have US rights), and he’s been taking a few titles along in his appearances here in Hawaii, as well as in New York and France. (The Hawaii festival, though, was blessed with a rare 35mm print for their showing of In the Mood For Love. The projection team had to find and assemble an entire 35mm projector for the screening, as the main venue no longer had one. Staffers imagined, in fact, that it could be the very last 35mm film screening ever in Honolulu).

With Wong notorious for constantly tinkering with his supposedly “finished” products, I’m curious about the effect of him watching all his films again. “I try not to. I was forced to!” he jokes. “We’ve been working on these restorations for a long time. Next year is the 20th anniversary of In the Mood For Love, and around the world there will be retrospectives and reissues of the film, along with the other films. A few years ago I watched my film somewhere, looked at the monitor, and said, ‘Why does it look so messy?’ They said, ‘Now we are used to 4K projections, so you have to upgrade it, otherwise you will have those kind of feelings.’ We have been working on it. Last year in Lyon, we showed the restored films in front of 5000[-person] audiences, and it looked very, very good. The problem is that it’s like opening a Pandora’s box, because you will never never feel like it is good enough. You say, ‘It looked better before,’ or ‘The color is not right,’ etc. It brings up a lot of pains.”

It’s not just his past films that Wong’s currently working on, however, but two other new projects, the Amazon-funded streaming series Tong Wars and a feature film, Blossoms, based on the 2013 novel by Shanghainese writer/editor Jin Yucheng. The recent year has seen Wong make several trips to the San Francisco Bay Area to do research for Tong Wars, which follows a Chinese immigrant’s rise from indentured servitude in 1910s Chinatown to becoming a triad queen in the 1970s. On what attracted him to the project and the setting, Wong imparted, “I think the Chinese-American experience has a lot of connections and inference with what’s becoming modern China now. It’s a very interesting history and experience that hasn’t been addressed properly, and I think that would be something that would be very interesting to do. That’s why we also went to Chinatown here [in Honolulu], because that’s the first spot before San Francisco Chinatown.” Exploring Honolulu’s Chinatown before a festival gathering to honor him at acclaimed restaurant The Pig & the Lady, located in the heart of the neighborhood, Wong and his wife found much that caught their eye. “Physically, yes, it was my first time [in Hawaii],” he noted. “But I spent so much time studying Hawaii and Chinatown before I arrived, so I feel that it’s not my first time. I spent time trying to find the places of the photographs I had seen, so I didn’t feel like a total stranger here yesterday.”

Tong Wars, however, has slipped onto the backburner in favor of Blossoms. The novel’s author, Jin Yucheng, was already in his sixties, with a successful career as a literary editor, when he began writing a series of daily fictionalized posts on a now-defunct Chinese web forum in 2011; the response was so great that he turned the posts into a novel, published in 2013 to great acclaim. (An English translation is due from Farrar, Straus & Giroux by the end of the year). Moving from the 1960s to the 2000’s, the book follows three young men from different neighborhoods and social strata in Shanghai, their growing pains and evolutions matching that of the city. Intriguingly, in the novel’s preface, Jin even references Wong Kar-wai, comparing modern Shanghai to the nameless, money-and-fashion-obsessed Tony Leung character from the end of Days of Being Wild. “This is his first novel, it won all the prizes in China,” Wong recalled. “He’s already 60-something, and he’s been the editor of many of the most important literature magazines in China. I think the reason why he hadn’t been a writer for all those years is because his writing is not very mainstream. It’s not a mainstream work, with mainstream ideology. It’s about Shanghai from the 1960s to the 2000s, in a way it’s very much Marcel Proust. It captured the essence of the transitions of China, and specifically Shanghai, from the Mao ideologies to everything opening up and becoming what Shanghai looks like now. It’s about the lives of three young men from their teenage years to their middle age.

“The reason that I’m attached to this material is first I was born in Shanghai. I went to Hong Kong when I was five, and the period described in this novel is basically my absence. I finally went back to Shanghai very often after the 1990s, because we have to work there. But I think that to make a film about this novel is to fill up my absence, so that I can imagine it and also give my audience a piece of a puzzle. In the Mood for Love and 2046 are set in Hong Kong, but the characters came from Shanghai. Blossoms is the missing piece of the Shanghai trilogy.”

Queried on where he finds the inspiration to begin a film, Wong offers some advice. “There’s many reasons for you to start pictures. As a filmmaker, you always have an idea. When I’m sitting here, I can start thinking about a story. It comes very easily. But at a certain point, like when you know you’re going to spend the next three or six years on a picture, along the way you’re going to say, ‘Is it something that’s really worth it, or is it not good enough?,’ and put it aside. At the end you find the one that you think, ‘This is the one that I want to dedicate the next few years of my life to.’ It’s a hard decision.”

Looking back on his career, Wong offers some final advice for beginning filmmakers. “Just make the film,” he says bluntly. “Action is the first word you must learn. And the second is patience. As a filmmaker you must wait for many things. You have to wait for money, the weather, the cast, the release. So you need to have good patience. The process is so long and most of the time it’s frustrating. To be a filmmaker, you must first take action, then have the persistence to pursue it.”