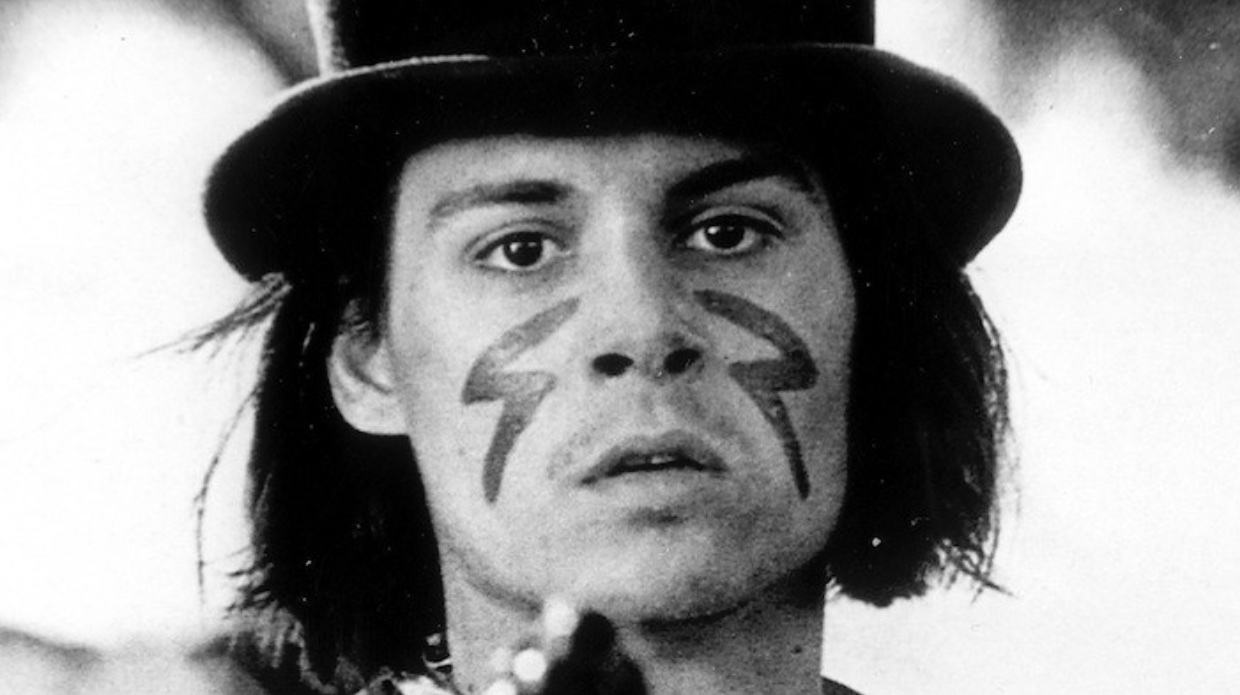 by Scott Macaulay
in Director Interviews, Features, Issues
on Aug 23, 2019

The following interview of Jim Jarmusch about Dead Man was published originally in Filmmaker‘s Spring, 1996 issue. It is appearing online for the first time. Dead Man was reissued last year by and is now available from Criterion.

In Jim Jarmusch’s new Dead Man, Johnny Depp plays William Blake, a mild-mannered accountant who travels by train across the frontier West to work in a bookkeeping firm run by a crazed, gun-toting Robert Mitchum. When, as in a Kafka novel, the job vanishes before it’s even begun, Blake finds himself a hunted man, pursued for a murder he didn’t commit while his life force ebbs away through a bullet wound in his chest.

But while Depp’s character may carry the poet’s moniker, it is Jarmusch himself—with his dedication to a personal sense of film rhythm and pace, his use here of poetic, unexplained symbols, and, finally, his ability to finance his films in ways that ensure his ultimate creative control—who most strongly echoes Blake. An engraver and printer by trade, Blake controlled the means of production, ensuring that his unique and eccentric work would always find a way out into the world. And with this sixth feature, a “minimalist epic,” Jarmusch, who has inspired a generation of filmmakers after him (look up “independent film” in Microsoft’s Cinemania ‘96 and you get a still of Stranger than Paradise) continues to make unpredictable and highly personal cinema in a climate that prioritizes neither.

Filmmaker: I thought a lot about Neil Young and Crazy Horse while watching the movie. It wasn’t just because his guitar sound is all over the soundtrack. A lot of the movie reminded me of Sleep with Angels—a couple of albums ago. That record had the low-end, distorted guitar played somewhat softly and the honky-tonk piano but also similar themes—death, the corrupted American myth, Native Americans, industrialization as destroyer…

Jarmusch: That’s in a lot of Neil’s songs. “Cortez the Killer,” “Pocahontas”—

Jarmusch: Well, we’re interested in a lot of the same things. Dead Man is a very simple story on the surface but there are so many things the film is about—history, language, America, indigenous culture, violence, industrialization. I wanted these things to be important but in a peripheral way. The film has a lot more levels than any of my other films but I wanted to stay focused on the simplicity of the story and let those other levels coexist without one taking precedent.

Filmmaker: Was it a concern of yours that your William Blake, played by Johnny Depp, is such a passive character?

Jarmusch: It’s hard to be a passive character, a vessel that carries us through the story. I wanted to work with Johnny in advance but he only arrived a day before shooting. But I was really amazed by how precisely he had mapped out his character’s emotional flow throughout the piece on his own.

Filmmaker: Well, he does ultimately step into his role as an outlaw. In the trading post scene, it seems as if he’s even enjoying it.

Jarmusch: By that point, he’s giving up any thoughts of going back to the person he once was. And I think [the change] happens too because when Nobody leaves him alone, something happens to him that is not told to you by the film. We don’t say, “A vision quest has changed his character.” But something happens. When he comes out of the tunnel and he and Nobody ride through that cathedral-like redwood forest, the next scene is the trading post.

Filmmaker: And that’s the scene where you most explicitly deal with this idea of the corrupted American myth. The traders are selling the Indians’ blankets contaminated by smallpox, tuberculosis…

Jarmusch: It’s funny, whenever Neil sees that scene with Alfred Molina, he says, “Oh man, there’s that South African guy.” He’s an English actor and I was wondering why was he obsessed with him being South African. Then I realized—biological warfare, not serving the heathen aboriginal—it’s the same thing.

Filmmaker: Are you there kind of director who finds the film in the cutting room or do you do the montage in your head as you shoot?

Jarmusch: I’m in-between. When I go in the cutting room, I have a pretty good idea of how a scene was intended to be cut together. The editing is very important because you get to a Zen-like place where the film starts telling you how to cut it. A lot of scenes were shot for Dead Man that are not in the film. Shooting is like cutting up big pieces of granite that are sort of in the right shape of the thing you want to sculpt out of them. And then you go back, and the shape is not exactly what you had in mind so you sculpt them some more. I like the process. That’s why I never use a storyboard and on Dead Man I didn’t even have shot lists in advance. I don’t want to know in advance what we’re going to do because then we are not thinking on our feet.

Filmmaker: How did you work out the conception of the film’s look with d.p. Robby Mueller? It’s a black-and-white film with lots of shades of gray. And the landscapes were quite ugly but beautifully so.

Jarmusch: We worked hard to use black and white like it was used in the ‘30s and ‘40s when the gray scale was the color palette. We wanted to avoid the recent “hard” black-and-white look, although the blacks and very black and the whites are very white. We wanted a feeling like a film by Mizoguchi. And when we were scouting for locations, whenever we say any magnificent view, like a postcard type, we would appreciate it, Robby and I, and then turn our backs and look for our location with that out of view.

Filmmaker: A lot of recent movies about death have adhered to that Elizabeth Kubler-Ross model—the five stages. I think Fearless even used it as a structuring device. Anyway, one level is acceptance. Does Johnny Depp ever reach that state?

Jarmusch: Not an obvious one, but certainly he does in that he accepts that his physical life is limited in time and he has to go on a journey. Does he make a realization that he’s going to die? I didn’t want to make that obvious. In fact I tried to throw it away at the end. The last piece of dialogue before he’s shoved out into the ocean—there are jokes in there. “Now you have to go back to the place you came from.” “You mean Cleveland?” I didn’t want a heavy handed scene.

Filmmaker: You are someone who is making films not only outside of the Hollywood system but also outside of this new mini-major system—Miramax, Fox Searchlight, Fine Line, the Polygram companies—

Jarmusch: —I’m still broke and a lowlife, I tell you.

Filmmaker: But Dead Man, you sold it blind to Miramax—meaning they couldn’t see it even though you had a print—for a good amount of money just before Cannes. That testifies to a strong interest American distributors have in your work. Yet, look at the credits of the movie and it’s all European financing.

Jarmush: Mostly European, there’s some Japanese in there and some bankers finished it but I don’t want to go into that.

Filmmaker: My point is, if you wanted to make a movie with one of those American companies, you could have. You wouldn’t have to mess with stitching the financing together from all over. Yours is a more complicated method of financing but I suspect it offers you more freedom and autonomy.

Jarmusch: Exactly. The only thing that matters to me is to protect my ability to be the navigator of the ship. I decide how the film is cut, how long it is, what music is used, who the cast is. I make films by hand. I’m there every day in the editing room. I’m there in the financing. I write the script. I collaborate with a lot of great people. I don’t believe in the auteur thing but somebody has to say, look, a filmmaker should make the film, not businessmen. My films are ghettoized by being called art movies. When people describe a rock-and-roll group as art rock, I want to put on Motorhead. And then I wonder, why is that? What’s wrong with art? But they will make anything a dirty word to make commerce and corporate control the priority. That’s Hollywood. Who has the most powerful agent and how much money can the lawyers suck out of the above-the-line? It’s one of the most over-paid of any field in America, entertainment. The Academy Awards—why don’t we have awards for short order cooks or bus drivers?

Filmmaker: Have you explored these new, “filmmaker-friendly” companies?

Jarmusch: Yes, there were two of those companies that wanted to be involved with Dead Man but they wanted script approval, editing approval. They wanted to be on my set. Hey, man—I don’t work that way. I do it my way or I don’t do it. It helps me in negotiating to know that I will walk away if I don’t have control.

Filmmaker: As you get older, are you still finding films that turn you on as much as stuff did that you encountered in your 20s?

Jarmusch: It continues to happen. I didn’t discover Ophuls until eight years ago and I had to see every one of his films. But I go through periods, like I had to see every film Steve McQueen was in. I don’t know why, but it had to be Steve McQueen. I go off on binges. Could be Brigit Bardot, could be Dolph Lundgren. But I don’t think I’ve seen every film Dolph has been in.

Filmmaker: Have you seen many of them?

Jarmusch: Van Damme I find annoying. There’s something smug about his face. I like how Dolph Lundgren is so robotic. He doesn’t pretend to have to play a character that has some emotional dilemma.

Filmmaker: What about directors?

Jarmusch: I liked Slacker a lot. I like Gus Van Sant. I liked Leos Carax’s early film, Mauvais Sang. I like Tarantino’s sense of how he structures stories. I hate what he’s done for soundtracks, though. It’s not all his fault. It started before him. “Let’s buy pop songs by the yard and put them over the film.”

Filmmaker: Well, Scorsese does that too.

Jarmusch: He does it in a very different way. I don’t think he does it to have a marketing tool, a record. And Scorsese didn’t even start doing it until Goodfellas. And it’s used very precisely to cue your emotions, your memory, to specific periods by the year. That’s different from collecting a bunch of shit and slapping it on and having a good ancillary marketing device.