“If the Co-Producer Disappears, Our Company is in Danger”: Komplizen Film’s Janine Jackowski and Jonas Dornbach 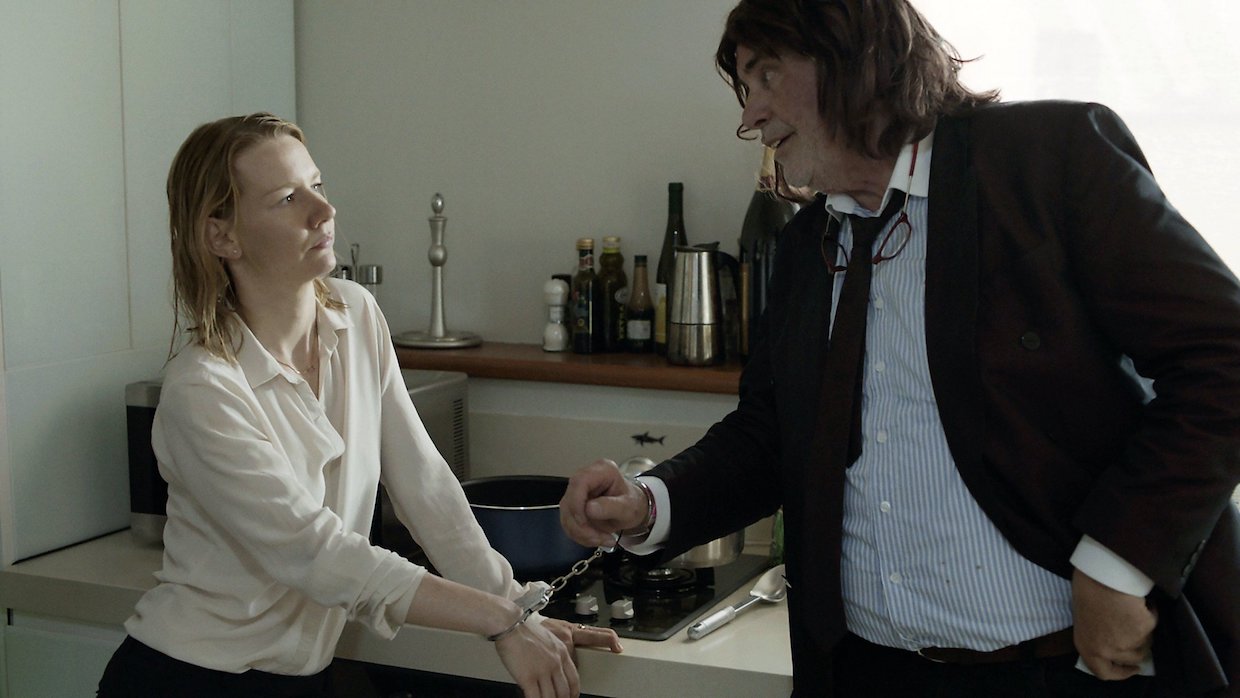 by Christopher Small
in Interviews
on Aug 29, 2019

Toni Erdmann, A Fantastic Woman, Western, Tabu, Syndromes: Each bears the name Komplizen Film as either primary or co-producer. Founded in 1999 by Maren Ade and Janine Jackowski at their Munich film school, Komplizen has gone on to produce a body of work that displays a keen and consistent intelligence, is distinctive to their own tastes and avoids the whiff—evident even with many fine arthouse production houses—of the cookie-cutter. Komplizen has produced Ade’s three films to date, providing a backbone to their experiments in other fields and giving them the confidence to draw other directors and co-producers into the fold. Last month, Komplizen was awarded a prestigious producer award, the “Raimondo Rezzonico” prize, at an edition of the Locarno Festival in which they also had two films—The Fever by Maya Da-Rin and Giraffe by Anna Sofie Hartmann—in and out of competition.

Jackowski and Jonas Dornbach, who joined the company in 2010 as a partner to Ade and Jackowski, spoke to Filmmaker in Locarno about the difference between working with Ade and with other directors, the best time to regroup, weigh your options, and take a risk, and on Miguel Gomes’ initial hallucinatory dream for what would become Tabu.

Filmmaker: You’re expanding and encompassing so many different projects at this point. I’m curious about your process for taking on a new project or director, since yours is a body of work with such a definite ethos.

Jackowski: It is obvious, but for us every project is different. Every director or project has different needs in terms of preparation, financing or distribution. “What does this film want? What does this film need?” This is the most important thing. Each of our films are very different but with each new one we want to be challenged—content-wise, style-wise, distribution-wise.

Dornbach: It also comes down the filmmaker in question. We saw Gloria in the Berlinale and we said great: let’s approach Sebastián [Lelio]. Or we saw On Body and Soul, approached [director Ildikó Enyedi] directly after the award, and asked: “What are you doing next?” There are different roles in how we approach films that we produce and then with films that come to us. It is not just about who is behind the camera, it has to be the whole package. We ask: do they share our view on cinema? If yes, we are ready to collaborate on this journey, which is always a long one.

Filmmaker: I suppose this only works if you are clear in your tastes as cinephiles.

Jackowski: Yes, so this process can be very easy. Sometimes Maren [Ade] comes out of a film and calls me or Jonas and says: “I just saw this amazing film.” We look it up, see who the producer is and who is the director. Maybe we have seen or subsequently see another work by either the producer or director. We get in touch—it is very simple. Sometimes of course, it takes a little bit longer. With Gloria it was Maren who saw the film and called us about it—

Dornbach: Before it won the award.

Jackowski: Exactly. So, then we watched it as a team at another screening and we found out [Lelio] lives in Berlin. We approached him via friends of friends of friends who had his number. It is very different to some of our other methods. Sometimes, when it is a producer or production company that we are dealing with, let’s just say it is a longer route. We have to write them: “Let’s meet in Cannes, let’s meet in Toronto, let’s meet in Venice.” We want to get to know them and see if there is a possibility for a collaboration. There are some production companies we meet who share our vision. You have to, you will spend so much time with these people. Co-productions are always a financial risk, so you really want to know who you are working with well. Trust is a very important part. If the co-producer disappears, our company is in danger. It has to be about trust. And you need to love spending time with each other.

Dornbach: With Miguel Gomes, we saw Our Beloved Month of August, then Janine met him at BAFICI. We knew we shared the same vision of cinema. Maren said he told her how much he wanted to make a film with a band, a crocodile, and in Africa. [laughs] She said, “Sounds amazing,” then the journey started. There’s not a clear path that we follow.

Filmmaker: I’m curious about the differences you sense when working with Maren and with another director. You’re such a close family, everything is so integrated. I can imagine that it is quite different.

Jackowski: We know Maren so well and Maren knows us so well that we don’t blah-blah around. This saves a lot of energy.

Dornbach: And gives us more freedom.

Jackowski: About Maren: she works very, very hard. She expects the same from her co-workers. She’s precise. It is not like talent fell into her arms and she’s a genius. Her projects take a lot of time and energy.

Filmmaker: In the scriptwriting stage?

Jackowski: She really wants it. She wants our involvement. There are other directors who don’t want that. They are much more independent. Maren has a small circle of people she likes to work with who are close with her. She always has an assistant who isn’t there to organize but from every casting idea, every rehearsal, every thought on the script, every variation she wants to try, this assistant is crucial to her for that. But yes, it is always fascinating to see how different directors work., and figure out what serves them best. With Valeska [Grisebach] for example, she would be disconcerted if I was as close with her as I am with Maren. She needs another kind of space. Of course, the number of projects we’re working on at any time today means we cannot work as we used to when we were super close, spending a lot of time with the director. This is not possible anymore. We have to split up and still ensure that we do the best for the given project.

Filmmaker: The fact it has been twenty years since the company was founded gives this interesting dividing point to think about Komplizen. If you read the history of your company, what is amazing is that the points of reinvention often come at a moment that might be a huge crisis for other similar companies. Even gifts of fortune—like the success of Toni Erdmann—require serious reconsideration of strategy.

Jackowski: Yes, but these are always after Maren’s films. [laughs] The Forest for the Trees, for example, was Maren’s graduation film. That was our first international festival experience—the first time we went to Toronto, the first time we went to Sundance. We started to understand this system: how world sales work, how distribution works, wow we could work with press—how does any of this stuff work, basically. We started to meet the first people we would work with. And we got a nomination for the German film award for Best Film. With that came a grant of 250,000 for the next film. We thought: “Now we have this money, we have to keep on going.” The company was more or less a student project, you know? When we founded it, we thought it would be situated within the film school. But then we got to know each other during our studies and thought we should keep on going with this. It went so well, working with each other. But still, we didn’t earn anything. I had to work as a freelance producer for many other companies to make a living. Maren’s second film [Everybody Else] was the first in our company that had a proper budget. Meaning: we could actually pay ourselves. Therefore, I didn’t have to work for other companies. That was really the start of everything. Also, we [gesturing to Jonas] both met at that time. Jonas was working as a production manager. We spent a lot of time on the project. Of course it comes down to money. We could suddenly take an office, have individual salaries, mobile phones—everything. When the film was finished and in competition in Berlin, we then moved into co-productions. The first festival after Berlin was BAFICI where we met Miguel [Gomes] and Luís [Urbano]. This super-important door opened for us: co-productions.

After Toni Erdmann… well, this project was such a monster that it had eaten up all our time and energy, like a black hole. It caused a complete development hole. When we stopped shooting, there was no other project. That was really the moment in which we all sat down together and thought about the kinds of films we wanted to do, where we saw our future. What is our goal? Who are the filmmakers we wanted to produce? In Germany and internationally. That was really a wonderful moment because we suddenly felt like, “Let’s do this, let’s go, go, go.” While you are in the midst of this production machinery, you rarely find these moments in which you sit still and concentrate on your direction. You’re so busy feeding this system. It is so important that every few years you have this moment where you refocus.

Dornbach: And our relationship didn’t change after each of these milestones. Even after Toni Erdmann which we saw as a kind of test—not a test exactly but the word will do for now—for the company and the relationship, when you have so much attention on you all at once, it didn’t change anything between the three of us or within the company. We are still in the same shitty office as before. The coffee, at least, tastes better.

Filmmaker: Not in a penthouse yet?

Dornbach: No, no. [laughs] We have no hierarchy between all of us. That’s something special and unique in a way—for us, it is really something worth protecting.

Filmmaker: It is staggering to me that these moments come out of the void. To stare out—as after Toni Erdmann—and reflect and re-strategize is just amazing to me and speaks to the well-defined core of Komplizen.

Jackowski: What has always been of the utmost importance to us is freedom to make choices. We never wanted to be in a position where we had to make a project purely for financial reasons, or we had to [make] TV, or we had to take on something new. We gained this freedom with our successes, you know? After Toni Erdmann we didn’t shoot a film for two years. That was great. Of course, it starts to make you a little afraid. But actually, I’m so thankful for this freedom. That is the most important gift to that all this has brought.

Dornbach: So, it is, in fact, good to have a shitty office.

Jackowski: Exactly. It is good to have a small team and, yes, a shitty office.