Diverse Creators, a Bridge to the Publishing Community, and First-Time Filmmakers in the Project Forum: IFP Talks the 2019 IFP Week 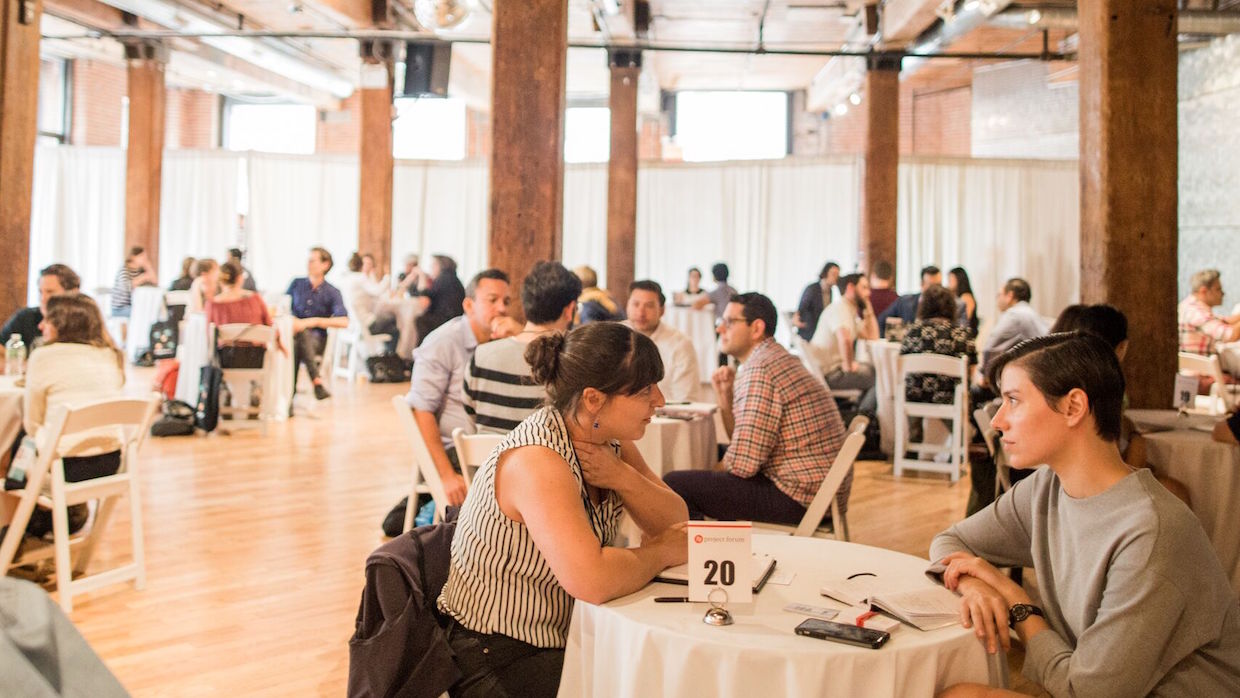 Kicking off today in and around DUMBO New York is IFP Week, the yearly annual conference and coproduction market produced by Independent Filmmaker Project. Today’s events include a day of panels and talks at BRIC, with the event then moving to IFP’s home, the Made in New York Media Center, as well as other nearby locations.

In recent years IFP Week has developed an identity far from its origins as a scrappy, sometimes over-the-top market for finished independent films unspooling at the Angelika’s basement theaters. The heart of the event is now the much more sober Project Forum, which connects independent makers of features, documentaries and independent episodic work to a wide spectrum of U.S. and international producers and buyers. IFP also runs year-round labs, and IFP Week finds those filmmakers attending and partaking in all the networking opportunities. And then there’s the conference, kicking off today with a keynote from Imagine Impact’s Tyler Mitchell and continuing throughout the week with panels and smaller-scale events allowing filmmakers to meet financiers, festival reps and distributors.

A few days before the 2019 launch of IFP Week I sat down with the organization’s new executive director, Jeffrey Sharp; Milton Tabbot, Senior Director, Programming; Zach Mandinach, Senior Program Manager & Producer; Charlotte Reekers, Senior Program Manager Nonfiction; and Gabriele Capolino, Senior Manager & Producer, International and Episodic. (Full disclosure: IFP publishes Filmmaker, so these are my professional colleagues.) We discussed the coming week and changes in the event, a conversation kicked off by Sharp, who immediately cited some of this year’s public programming as representing an attempt by the organization to “create an exciting dialogue that opens up beyond just aspiring filmmakers looking to learn the nuts and bolts. I’m thinking of the [“Staying in the Room”] panel in particular, which speaks to a real interest of mine. I’ve been working in China a lot in the past few years, and there are so many exciting opportunities for U.S. filmmakers to get their films financed there, and it’s also a new market for distribution. And there are also opportunities for U.S. Producers to develop relationships with Asian filmmakers.”

Another new emphasis Sharp calls out has to do with IFP Week’s synergy with the New York publishing community. There’s a whole day dealing with adaptation, Sharp notes, which “came out of a field trip we did earlier this year, where we took a delegation of New York producers to BookExpo and spent a day at panels and in conversations with publishers and authors discussing opportunities to work with publishers in order to access IP earlier in the process.” Among the publishers now connected with IFP is Audible, the audiobook publisher and now a Film Week sponsor. An Audible rep will be attending to meet with creators about the possibilities of developing their work for an audio platform. “It just adds to the dimension of who IFP is,” says Sharp, “and to the strengths of being in New York. Creating intersections between publishers and our community of filmmakers is exciting.” And even though, unlike last year, audio-only projects aren’t being included in Project Forum, says Sharp, “There’s an opportunity for folks with feature or episodic projects that, for whatever reasons, aren’t connecting with the market right now to experiment with other forms, like audio podcasts.”

What is on the increase at Film Week’s Project Forum is episodic work. “Submissions were very high, compared to last year, and the level of projects are going up,” says Capolino. “And more companies and [executives] are attending, including show runners and teams of people coming to listen to Monday’s day of TV pitches.” On the streaming side, Netflix, which is a new sponsor this year, has representatives taking meetings, as well as Amazon, and in the public screenings are films from both companies: Knock Down the House and The Report.

While the public-facing programs and events may be the most visible elements of IFP Week, the heart is the closed-door Project Forum. “As an observer to the selection process,” says Sharp, “it’s the first time I had an opportunity to see it up close. And it’s remarkable how the team here has such an eye for spotting talent and for projects that have such a sense of potential. These are filmmakers who will go on to have extraordinary careers.”

Says Reeker, comparing IFP to doc markets like IDFA, “Makers often complain that there’s not access — people participating there are often the big filmmakers and producers who already have a big platform. Something I’m so happy to see here is that we have 75 projects [on the documentary side], and there are a lot of first-time filmmakers, both through the IFP’s Documentary Lab but also because we select many first-time filmmakers. And something that’s amazing this year is that the projects that got the most meeting requests are the ones by the first-time filmmakers.” She continues by saying the Film Week’s model of one-on-one meetings is less stressful for these filmmakers than many of the European coproduction markets, where filmmakers pitch on-stage in auditoriums before audiences and panels of judges.

On the fiction side, first-time filmmakers are among the most popular projects as well, confirms Mandinach, who cites Danny Madden’s Beast Beast as one that buyers are targeting. “I think that people, regardless of whether they’ve been coming for years or are coming for the first time, respect the curation here and know that they’re going to be able to sit down with people that they might otherwise not get to meet.”

Says Tabbot, “I think for the past 10 years it’s been that if a project is in the mix here it is of interest. It’s got a kind of stamp of approval. I think that’s why we feel like we can play at it here, taking projects that are going to be a more difficult sell along with others that might be a slam dunk. But it’s always surprising — it’s interesting that we’re talking right now instead of just after the selection process, because we can see which projects have risen to the top and have a lot of meetings and which ones have just moderate interest. And that’s something we can never tell. Sometimes it’s the ones that have the most meetings that are not necessarily the ones that are going to sell for the most money, or go to the most festivals. Once the projects go out into the world, they play out in different ways. Here, it’s all about expectation.”

IFP Week’s program is a diverse one, both in the public-facing events and in the Project Forum, and with finding diverse creators today an industry imperative, Sharp says that’s something that makes “IFP more and more relevant today. It’s really a tapestry of many voices and perspectives here,” says Sharp. “There’s this call in Hollywood, in the industry, for diversity and new voices, but I don’t think they have been traditionally equipped to [find those new voices]. You go out to L.A. and pitch, and you see what’s going on there — bandwidth is limited, and there’s not a lot of time for discovery. So that just makes IFP more and more relevant.” Speaking to one aspect of the diverse program, Reeker says, “Personally I am very excited that we have a few films where there is someone on screen with a disability. That’s an area where it’s important to have more diversity.”

Among the new initiatives this year is a producer networking event that brings together in DUMBO the group of producers IFP have supported this past year through its various international partners. The producers IFP have selected to send to the Rotterdam Lab, the Cannes Producers Network, and the ones taking part in IFP’s collaboration with Blackhouse are being supported at IFP Week through their inclusion in the Project Forum as well as through their own roundtables and panels. “We’ve always sent these producers off somewhere,” says Mandinach, “but we’ve never really been good at bringing them back into the IFP fold. They go off to these overseas programs but never really have an understanding of what it is we do here. So this is a new initiative that gives them an opportunity to meet each other face to face.

This is the fourth year since IFP moved Film Week from the Upper West Side to DUMBO. At the time, the move was anxiety-making. Would filmmakers and out-of-town visitors feel at home in Brooklyn? “People like it,” says Tabbot. “It’s more like a campus. It’s easy to run into people. “I just walked though all the venues yesterday,” says Sharp, and “I can’t imagine any other place for this event. It’s like a location scout’s dream — these incredible lofts and industrial spaces for the parties. And it’s geographically where so much of our community is. Coming from the early days of the basement of the Angelika, where we were shoehorned into these spaces, this feels so organic.”