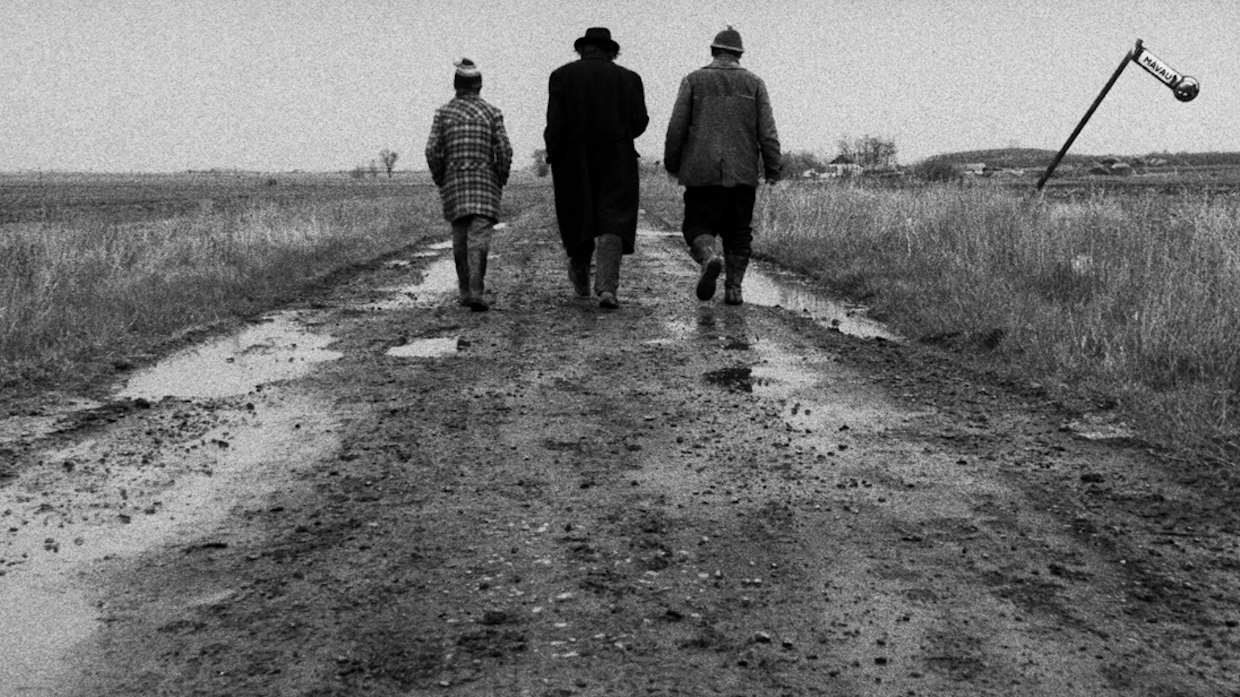 Interviewing Béla Tarr is pretty much like what you might expect from religiously reading every interview he does, and the below conversation is no exception to the rule: he speaks calmly, coming off as heated when you’re reading the interview, but the copious profanity is punctuation rather than ire. 25 years out from Sátántangó, Tarr has made himself available for press in light of its 4K restoration from Arbelos Films (the reissue enters limited release at Lincoln Center on October 18). I really couldn’t pass up a chance to talk to a legend—and that’s it!

Filmmaker: I was reading some interviews with you from earlier this year where you said you didn’t really like talking about your past films very much anymore. And you’ve talked about this film so much over the years, so instead I’ll ask what doing the color grading for the restoration was like?

Filmmaker: What were some of the corrections? Are there things you remember not coming out correctly when you made the print the first time?

Tarr: I have to tell you, this film and all my movies are very strongly in my memory. I remember almost frame by frame, because when I did it, I planned it frame by frame. I remember what I wanted and how we did it, and I remember how it has to look. I think we achieved, let’s say, 90 percent, because of course digital is never the same as 35mm. We are almost there, but we did it the best [we could]. That’s OK. But it’s a technical question, who cares? I don’t care. It’s just a tool. It’s not a goal. How can you believe a tool is more important than your message or your main issue? Who cares about the tool? I’m not. I’m just using.

Filmmaker: I saw the film in 2005 at MoMA on a new print, and I guess it showed so many times that it’s now really scratched-up. So this digital version is now the best possible way to see it, theoretically.

Tarr: I have to tell you, for me, the film is 35mm celluloid. I made all my shit on 35mm celluloid. My problem is—it’s not technical, again. I don’t care about the scratches because maybe you got an old print. The problem is, the digital picture has to be a new language. But we do not use it as a new language. People are using it to look like a fake film camera. Why do they not think about a new visual language? If you see these fucking digital possibilities, you can create a new language that is only for digital technology. It’s really stupid if you believe that a digital picture will have the same quality as 35mm. Never! But you have a totally different possibilities in a different way, but you can use it. Why don’t you? It’s not my job because I do not touch cameras any more. But there are a lot of possibilities out there.

Filmmaker: Do you have an iPhone? Do you ever mess around with the camera on it just to see what it looks like?

Tarr: You know, I respect the picture too much. I don’t care about the iPhone picture. I know I can do a movie with my iPhone. But it’s not my job. But sometimes I’m pushing my young people and my students around the world to do something with iPhone, to discover a new way of the picture. I just came back from Japan, and I was pushing some of my students there to shoot something with iPhone, but not using it as a film camera. Try to find a different way. Be more experimental, be more revolutionary .You know, when I saw the first time in my life Nam June Paik’s video about this woman with the violin [I think he’s referring to this], I was so happy because I believed, “OK, maybe we found a new way for the motion picture.” No. It became just fucking Hollywood shit.

Filmmaker: Did you ever watch a lot of Hollywood films?

Tarr: I did it a lot, of course. First of all, a lot of good guys are working there, and of course, I loved their works. But it doesn’t mean I have any desire (laughs) to see that. A lot of guys are working for Hollywood. Of course I’m watching them. I like Tarantino movies. I like Cuaron’s, all the Mexican crazy guys who started occupying Hollywood. That’s fine. I like them as persons. I like their movies. But I never believed to do something like that. I’m far from this.

Filmmaker: Did you ever go to Los Angeles to take meetings?

Filmmaker: Since your film school ended, have you been trying to find a new place to teach on a regular basis?

Tarr: No, I’m just floating and jumping place to place. I’m teaching officially in the French state art academy. My own film school in Sarajevo was funded because it was part of the private university, and of course, my students weren’t capable to pay the tuition, and that was the reason of the shit. It’s gone. Now let’s say I’m totally freelance. But I’m creating. I did a big exhibition in Amsterdam. I did a really big show in Vienna in June. It was a 2.5 hour long project, including a motion picture, theater, installations, live music—really kind of a complex project. It was so successful. I’m not bored. Now I’m negotiating in Barcelona to do something there. I’m working. I’m creating. I’m fine. But I’m not going to do feature films.

Filmmaker: Earlier this year, it was announced that the international rights to all of your films were sold to Luxbox. Does it feel like in a way you’ll never have to deal with them ever again?

Tarr: I gave them because I trust them. I hope they will do a good job. They will screen the movies around the world again. That’s all. I’m not caring about. If you are my age, you don’t look back. You have to go ahead, because you know you don’t have too long a time. You have to do now what you have to. I really don’t care now about the fucking details. It’s nothing about the box office, nothing about this shit. I have to focus on the new. In front of me is what I really want to do. That’s coming.