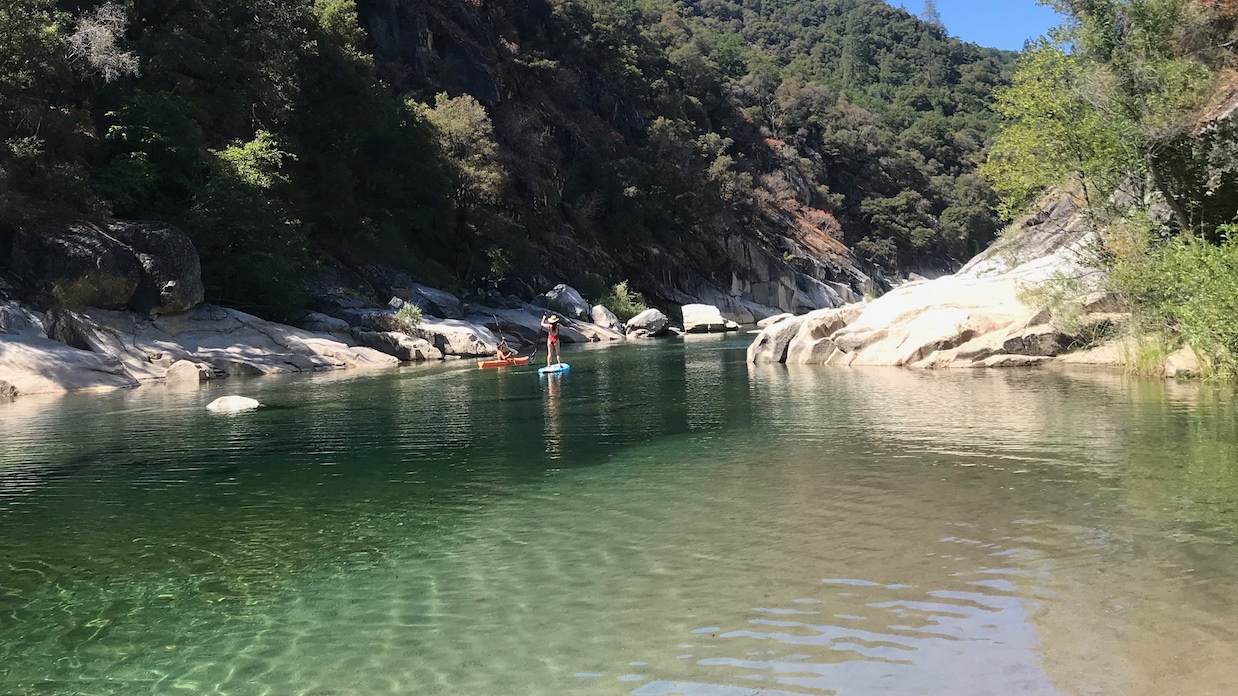 Two producers head to an afternoon meeting across the Yuba River

Borne of what the festival cites as its fun and nourishing values, the Nevada City Film Festival Filmmaker Residency honors the region’s Nisenan and Chinese-American communities by hosting diverse storytellers, with a priority on filmmakers of indigenous and Asian descent. The Residency originated from producer Karin Chien, NCFF Director Jesse Locks and NCFF Founder Jeff Clark.

We asked the four US producers three questions about their week-long experience at an artists residency/retreat designed for independent producers.

Filmmaker: This year the NCFF Filmmaker Residency turned its focus on independent producers with the intent to honor producers as creative beings and essential talent. Tell us about your creative process. Do you have practices that jumpstart or recharge your creativity?

Christina King: I do now! Before the retreat I got inspired by directors, scripts — things that sometimes came around and sometimes didn’t. That’s a process I don’t have any control over. After the retreat, I started journaling and making point to go to the park or find some kind of green space where I don’t look at my phone. That has helped tremendously with burnout and with having some agency over managing the quality of my energy. I also picked up the pace on sessions with a private writing coach. We’re not working with any purpose in mind other than writing to write. Writing is something I always do as part of developing and pitching projects, but it’s never really regarded as creative writing. And it should be! So spending time writing when it’s not treated as purely utilitarian, has been nice. It’s a reminder that I am a creative being and as such, a creative producer.

Kimberly Parker: I’m an inherently text-oriented person. As a producer, the way that I get into projects is through the words: the lookbook and proof of concept are less impactful for me. To recharge creatively, I read novels and journal on a daily basis. Lately, I’ve been reading a lot of Graham Greene and Toni Morrison.

Diane Houslin: My creative process is pretty fluid. It varies based on my mood and where I am mentally and emotionally at any given time. Though there are a few consistent things that I do. I spend time in silence and in nature as much as is possible in the heart of New York City! I also love to binge watch movies and tv shows to spark my creativity.

Vassiliki Khonsari: Time seems to be the most profound limited resource in resuscitating creativity, particularly when I’m hyper-focused on responding to emails, logistics, deadlines and firefighting. My best scenario for resuscitating creativity is just being able to unplug, flush out the other voices/reactive behaviour, and carve out a proactive plan, creative path with projects or strategies — it’s there, when I have enough breath of perspective that I can invest in developing creative ideas outside of demanding, time-pressured scenarios. The flame needs oxygen, and in this case, the oxygen for a creative producer is a little space and time. And connecting with the wonder of nature!

Zhang Xianmin: As a producer, I avoid going to the shoot. My presence on set would be a big pressure to the filmmaker. I try to go to possible sets during scouting. We meet regularly during writing and financing. And I assist in watching rough cuts roughly four to six times. I prefer to work with filmmakers open to discussion on casting, technical lists and budget. Many projects, though, are not financed or not financed enough. It also happens that I say no to filmmakers before financing starts. I think it’s healthy that producers pronounce their opinion. Festivals don’t consider producers as filmmakers, making a differentiation with a composer or cinematographer. I understand their position, even I don’t agree with it.

Filmmaker: Did you have one strong takeaway or memory from the creative retreat? What was its impact on you or your producing practice?

Christina King: The strongest takeaways were how good nature felt, and how grounded and clear headed I felt after a few days. I actually read an article after I got back about studies showing people’s problem-solving functions increased by 50% after three days in nature. I’m giving my co-working space in Gowanus the side-eye right now. A close second is the camaraderie and resources of the other women in the fellowship. I’m actively trying to surround myself with more women who inspire me because I don’t want that feeling to be accidental or incidental. I’m more active about building the environment and team I need to do good work now.

Kimberly Parker: When I remember the retreat, my strongest memory is of feeling valued and safe. Karin did a wonderful job shaping the week, and matchmaking the producing residents. Diane, Vassiliki, Christina, and I connected on an intimate level from the get-go. No topic was off-limits, guards were down, and sharing was the norm. I now consider every single one of those women a true friend.

Diane Houslin: My favorite part of the creative retreat was realizing the commonalities I shared with women from such different and diverse backgrounds from my own. There was an easy, shared sense of camaraderie and community amongst us as women, producers and humans that brought so much generosity to the experience.

Vassiliki Khonsari: Karin’s intention of carving out space for creative independent producers definitely manifested. Her generous vision and respectful approach to the process of independent producing, of acknowledging the cultural/demographic/ideological dissonance in the space between making creative work and the “industry” — in and of itself unleashed a powerful force — independently and as a collective, which I think we all felt on the panel discussion on the festival stage. In acknowledging the human in the process the retreat re-sparked my inspiration in thinking about the projects I choose, the responsibility I have and the process I envision.

And most profoundly, leaving Nevada City with an awesome tribe of sister peers who are super motivated, thoughtful, unique and bright producers with whom I now share a special connection! All affirming the humanity in the process… who you hire, how you work, the project and the approach… that producing is not just capturing the vision of a project but creating a vision of the process… from development to distribution.

There were so many special memories made at the retreat (swimming/kayaking in the fresh waters of the jewel-toned river, sunning on the river rocks, star gazing in sleeping bags at the end of the evenings) all deepened a connection to recharging, connecting with nature and each other, paving the way for an intimate safe space as a producer.

Zhang Xianmin: The “takeaway” from NCFF is a complex social observation. Which is really too complicated, I doubt even if I could write it down completely in one day. In very brief phrases, which could seem misinformed to be so short, there are two historical observations or remarks:

A. The U.S. society is much more based on community life than what I understood before, even though I knew it from reading some books. It is “bizarrely” both on Hilary Clinton and Frank Capra‘s definitions of community, though they would be ideological opposites.

B. U.S. society has possibly been largely influenced by the Second International’s followers, in the meaning that pacifist worker movements led people to a quasi-peaceful coexistence. But this would be controversial in view of colonialism. The equal development would be excluding no American, and the counterbalance to decent working conditions is the supply/exclusion of non-American manpower.

I have two other “superficial” observations: the difference between Grass Valley and Nevada City depends on visitors (not only tourism), and organic food is good.

Filmmaker: What is one specific thing you’d like the industry to fix in regards to how independent producers are treated or valued? (An example of a recent change: Sundance now includes producer credits in film listings.)

Christina King: Research and development money needs to be more available to a wider range of filmmakers. It’s easier right now for a commercial director, with no long-form experience, to get development funding on a feature or series than for award-winning storytellers to get early buy-in on their projects. That needs to change.

Kimberly Parker: I think the term “producer” should be broken down into more specific titles. Looking at a film’s credits, one can’t tell who creatively produced, who raised the money, who physically produced, or who was the financier (since, as Christina King said during the retreat, “producer” is the only credit you can buy on a film).

Diane Houslin: I would like for the industry to value non-writing producers as an integral part of the creative process and also not assume we should be expected to defer our payment, credit or rightful standing on any project.

Zhang Xianmin: In China, the big problem is still the transparency of censorship. Censorship has moved from a state council to the propaganda ministry, which can’t help to make it better. But, probably as in US, we have two other major issues: there are too many [filmmakers or projects] pitching, and we don’t know how to fight back against the supremacy of internet giants taking in or excluding work.