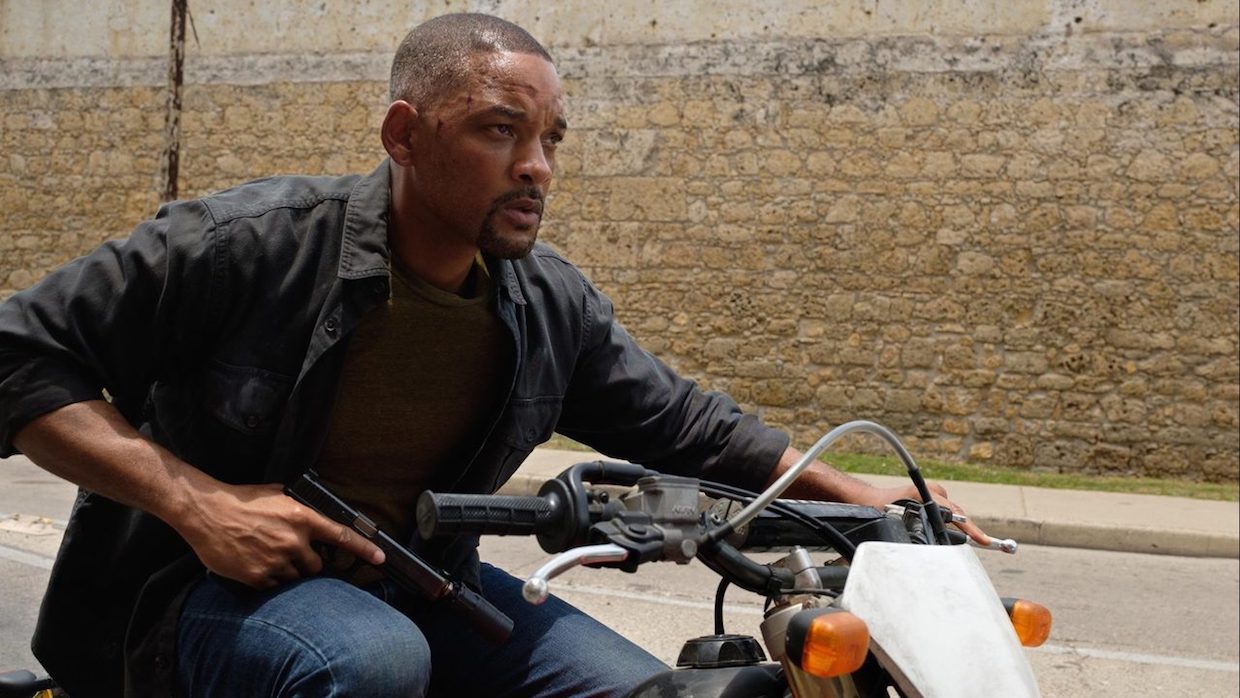 Will Smith in Gemini Man

There are only 14 US theaters capable of showing Gemini Man at 120 frames per second—only in 2K, not the intended 4K (Ang Lee is making movies for the future). Going to one of those 14, NYC’s AMC Lincoln Square, is disorienting even before the movie begins. The Dolby theater has its bass jacked to the point that a bumper encouraging the purchase of soda and popcorn generates rumbles so intense the seat pulsates beneath, as if an ice cube dropping into an ice-cold Coke should equal an earthquake right below—it’s all very silly and hyperbolic, and Gemini Man (to its infinite credit) does not resort to similar overkill to literally shake viewers up. Another pre-show bumper is designed to show that laser projectors can now actually register true blacks rather than milky grays, something I’d seen highlighted at a Dolby presentation a few years ago. The simple projector switch from that gray to true darkness was startling and effective as a demonstration that these projectors can solve a color resolution problem (one 35mm never had, but still), although I have to wonder how much average audiences care when you split the screen in half to show the difference. Still, I laughed at the on-screen boast, after a fade to “black,” that “Yes, the projector is still on,” and appreciate the problem-solving spirit.

Gemini Man is the story of a man who does not work in film but whose life is nonetheless structured by the unspoken rule that he can only go to locations where there are significant tax incentives or credits in play. This creates an inadvertent parody of James Bond’s traditionally lavish globe-hopping, with the sites of play here restricted primarily to Georgia, Hungary and Colombia (whose program is worth reading up on). Someday a bright programmer will pull together a series of films, many unexceptional, that inadvertently act as maps of Atlanta and adjacent suburban areas—for now, it’s pretty impossible to ignore how many movies have chosen to shoot there for reasons that have nothing to do with engaging with the specific location. (Not to mention the entirely separate implications of shooting in Hungary at this fraught, nationalistically-inflected moment.) The location that’s not on-screen, but which is obviously just as important, is China: the opening production company logos are enhanced for 3D but only at a regular-looking speed for the American ones. When the Fosun and Alibaba logos come up, they’re re-rendered, moving much faster at 120fps in a definite flex—a reminder there are theaters in China that can show this at full 4K, but not in the States.

Pointing the camera straight up at a railway station’s roof is a smart first shot: viewers have a few seconds to get acclimated to the extreme depth in a static, impersonal image before Lee moves the camera to introduce actual human beings, which is predictably disorienting. There is a widely held assumption that the whole point of 120 FPS is to create something that looks like “reality,” removing the entire inherent stylization of film to date and rendering the world afresh. I’m not sure that’s the eventual endpoint, if any, of this technology: Gemini Man is intensely visually defamiliarizing throughout, more than enough to make all two hours pretty fascinating, but the “reality” factor is definitely on a sliding scale.

It’s continually striking how intensely each extra registers, allowing for serious scrutiny of every last body—these aren’t hazy CG crowds of hundreds but individuals that all register strongly. Lee is aware of this, I think, and acknowledges it in a strange way, in a scene that begins as in media res street combat before the camera pulls back to reveal it’s all a training exercise. One running extra’s face looks particularly panicked and amused, as if he’s trying but failing to register the appropriate panic as he looks almost directly at the camera. At first this seems like the expression of an undirected extra caught too late in the edit, but this gaffe seems deliberate. It’s an exaggeration to say that everything is always in focus, because there’s plenty of foreground/background distinction—still, the technology often provides for the kind of absolute viewer freedom in choosing where to look that Tati dreamed of. It was the ambition of Play Time to make sure his Monsieur Hulot was just one person among many rather than being the inevitable focal point. Gemini Man‘s camera achieves the same goal by entirely different means, to much less purposeful ends.

There is a massive and intriguing disjuncture between the strangeness of the visuals and the familiarity of a script that’s exactly what it seems like, a Bruckheimer throwback with ’90s origins, including a surplus of expository dialogue primarily delivered by Clive Owen in various office rooms. (Typical exchange: bad guy informs good guy on the phone he has 12 minutes to get to their rendezvous location. No way, says good guy. “Now you have 11 minutes,” says bad guy.) It is very possible to envision the generic, 35mm-based version of this movie from 20 years ago until the scene universally agreed upon as the highlight, an extended gunfight-turned-chase that has Young Will Smith on a motorcycle gunning for Old Will. As the aggressor rams the front wheel at Old Will, pinned against a car, and comes within inches of vital parts, it’s clear that what we’re seeing is completely impossible: no matter how bold the stuntpeople involved, a mark is being hit with deadly precision that seemingly couldn’t be done safely or consistently, let alone captured so vividly. If this is fascinating (and exciting!) to watch, I don’t think that makes the rest of the movie worse: the gap between what we’re seeing and how we’re seeing it creates a good amount of viewing tension and strangeness. This isn’t a straightforward narrative, but a very expensive test-drive with nascent technology, and its primary appeal is the shock of new images emerging from old stock material: Gemini Man is for the experimental film crowd.