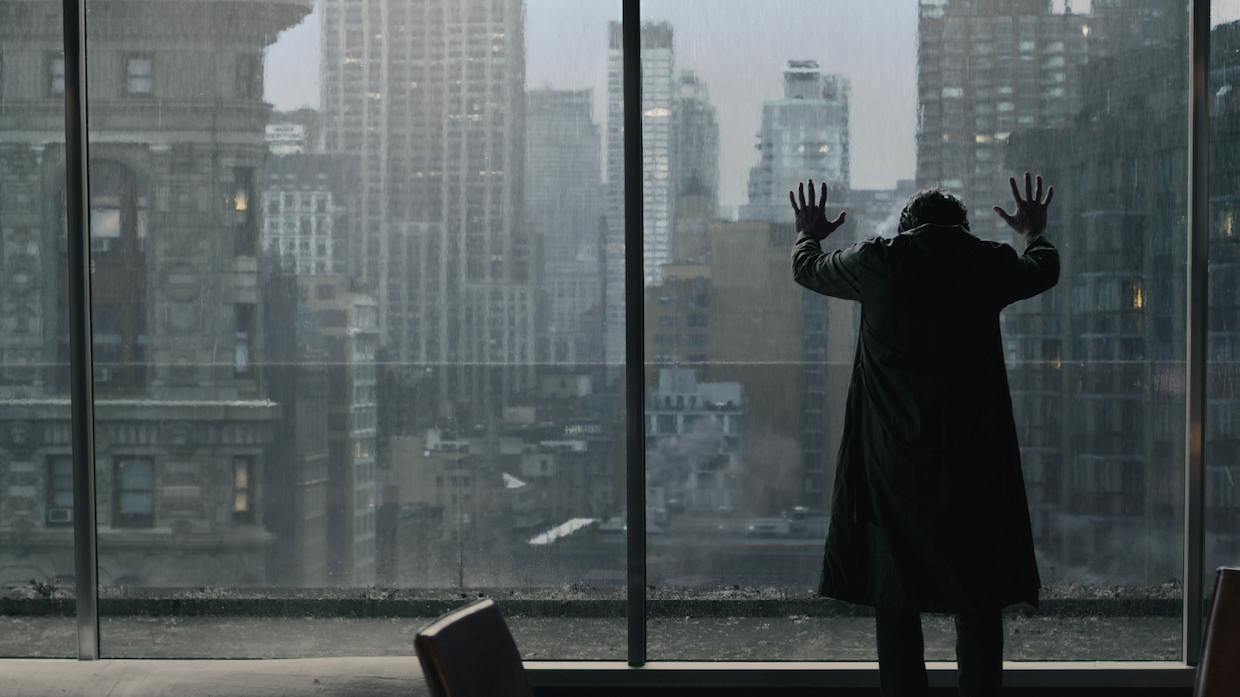 I’d seen none of the Marvel movies outside the Iron Man trilogy and wasn’t planning to dive into the MCU with Dr. Strange. But positive early responses piqued my interest, and then I got a curious invitation to a screening preceded by a technical demonstration of the Dolby Atmos sound system. Never having gotten the financial willpower together to shell out the super-premium price to check out what 128 channels of sound (including speakers on the ceiling), it seemed worth a listen. The presentation turned out not to be about just Dolby Atmos but the Dolby Cinema, a package deal theater space you can currently only track down at 45 locations, though expansion is predicted to go fast. It is unsurprisingly expensive: a ticket to the AMC Empire on 42nd St., where I saw the presentation, is $22.99 for adults. The theater itself is designed to be immersive, with matte-black walls and ceilings to minimize distracting lights around the floor-to-ceiling screen, which makes it odd that the reclining chairs’ controls light up blue whenever you prod them — when choosing between comfort and immersion, apparently the former wins.

Dolby’s Stuart Bowling (his official title is Director, Content and Creative Relations) repeatedly stressed in his presentation how immersive sound, massive screen size (42nd St.’s is 78 feet high) and super-bright projection would help to better immerse audience in “stories.” The kind of movie shown in a Dolby Cinema is almost undoubtedly going to be a high-end Hollywood product, one probably modeled on the 15-beat structure advocated by Save the Cat!, with prefab emotional plot arcs beginning and terminating exactly on the prescribed pages. Who, exactly, wants to be more deeply immersed in that particular familiar story? What super-immersive sound and laser projection are best suited for are, in fact, grand spectacle, with super-expensive technology in the theater projecting the labors of other expensive technologies. In my dreams, Dolby goes to Jodie Mack, or another avant-garde filmmaker whose approach to color is already attentively aggressive, and let’s then see what’s really possible.

One of the worst parts of the Digital Projection Revolution has been the disappearance of absolute black in favor of “milky grays”: that telltale dull, faintly illumination preceding the start of a film. Digital projectors up to now simply couldn’t render actual black. (If you’ve ever gone to MoMA — the only rep house in NYC that still refuses to post screening format information for all their films — you may have experienced the faint suspense of wondering if you’ll get 35mm or DCP, to experience a moment of great disappointment when that damn gray pops up.) A video of directors like Deadpool‘s Tim Miller or Inside Out‘s Lee Unkrich enthusing over the wonders of various Dolby packages wasn’t that interesting, but Bowling’s simplest demonstration of dual-4K Christie laser projectors got my immediate attention. Screen left, a white-enough circle against milky gray; screen right, a gleaming white circle against a totally black backdrop. Finally, a major distraction eliminated.

The second-most interesting part of the demonstration was seeing a clip from The Revenant on these projectors. The movie was shot on an ARRI ALEXA 65, and seeing it through the laser projectors confirmed that the standard multiplex projector is not giving us anything close to the full range of most digital cameras. Motion blurred and resolved in new ways, blacks were indeed total in the nighttime forest, and the general effect was akin to motion smoothing in service of something genuinely new and interesting. In his presentation, Bowling pointed out a few other things to look for besides blacks — ways in which this Dolby Vision system, with its expanded color space, could actually exceed celluloid’s color capacities rather than merely struggling to catch up. Skies, he noted, previously always had their brightness tamped down; otherwise, they’d drown out any other shot they’re linked with, so you never got to see clouds in full detail. A brief shot in Dr. Strange, seen in this format, made clear what he’s saying: those clouds are indeed super-sharp. Is that worth $22.99? I couldn’t make that call, but laser projectors are the first time I’ve seen digital projection that didn’t just seem like some kind of poor stopgap we’ve all been forced to live with.

Dr. Strange is a pretty OK lightshow. The storytelling basics are beyond tedious: there’s a moment where, in the middle of an extended training montage, Strange (Benedict Cumberbatch) takes a moment to write an email to his on/off girlfriend (Rachel McAdams). Why, I wondered, before figuring out the answer: to remind us she exists so that he can apologize to her later for prior selfishness, thereby confirming Strange’s moral arc. It can make you stamp your feet in impatience, but the big showcases are regularly spaced and quite fun. Kaleidoscope imagery can often come off chintzy, but the fabulous budgetary resources at work here mean that, say, New York City reimagined as a hexagonal (? couldn’t even tell you at first pass) plane of differently-tiled subway stations all converging on one constantly shifting plane is indeed quite neat. The finale requires Strange to, a la Superman, turn time backwards; previously destroyed structures build themselves back up while some of our heroes move forward in time. Bodies are snatched away from bricks moving the opposite way, and there’s a sense of fine-tuned visual wit — if Marvel wasn’t so dedicated to giving the people exactly what they want (or have been taught to want) over and over, this could be the most expensive, dazzling Looney Tune of all time. The ending is potentially a nod to Edge of Tomorrow, a self-loathing mockery of Marvel’s propensity for infinite self-repetition at the mock-apocalyptic finale, both or neither. It was an OK time, and I probably won’t be making a repeat visit to the MCU anytime soon if this is as out there as they get — the visuals are indeed very cool, but there’s just too much standard connective tissue.

Likewise, I probably won’t be making a visit to a Dolby Cinema anytime soon: it’s too pricey, and what they’re going to be showing is overwhelmingly not something I’m likely to care about. But I’m certainly glad the laser projectors are starting to infiltrate the multiplex, and hope they become standard rather than remaining “premium”: frankly, it’s the least consumers are owed. But I was disconcerted to hear Bowling say that most Dolby Cinemas are built for a 1.85 screen, with widescreen movies being projected letterboxed. The argument is that, because the blacks are absolute, you simply won’t notice the letterboxing, and that seems a little specious — improper masking is still improper masking. Expensive technology can’t absolutely conceal contempt for the patron.

Here’s the other thing: this weekend I went to see a 35mm print of You Can Count on Me. This is not a visually complicated movie: as Kenneth Lonergan explained to James Ponsoldt in our current issue, “The first film, I knew I didn’t know anything at all, and my goal was to keep it simple because I knew that was best — if I tried anything else, it would have been a disaster.” You Can Count on Me doesn’t look bad, just simple: there are no shots designed to get your attention for strictly visual reasons. But this $1.2 million indie now looks unspeakably luscious in 35mm: green hills with shades I’ve yet to see in a single digital projection, and those long-lost absolute blacks present without any fuss, let alone the necessity for a premium price upgrade. From a purely visual perspective, I’m still very, very unconvinced we’ve gained more than we’ve lost.