“A Scare is an Algorithm”: DP Checco Varese on It Chapter Two 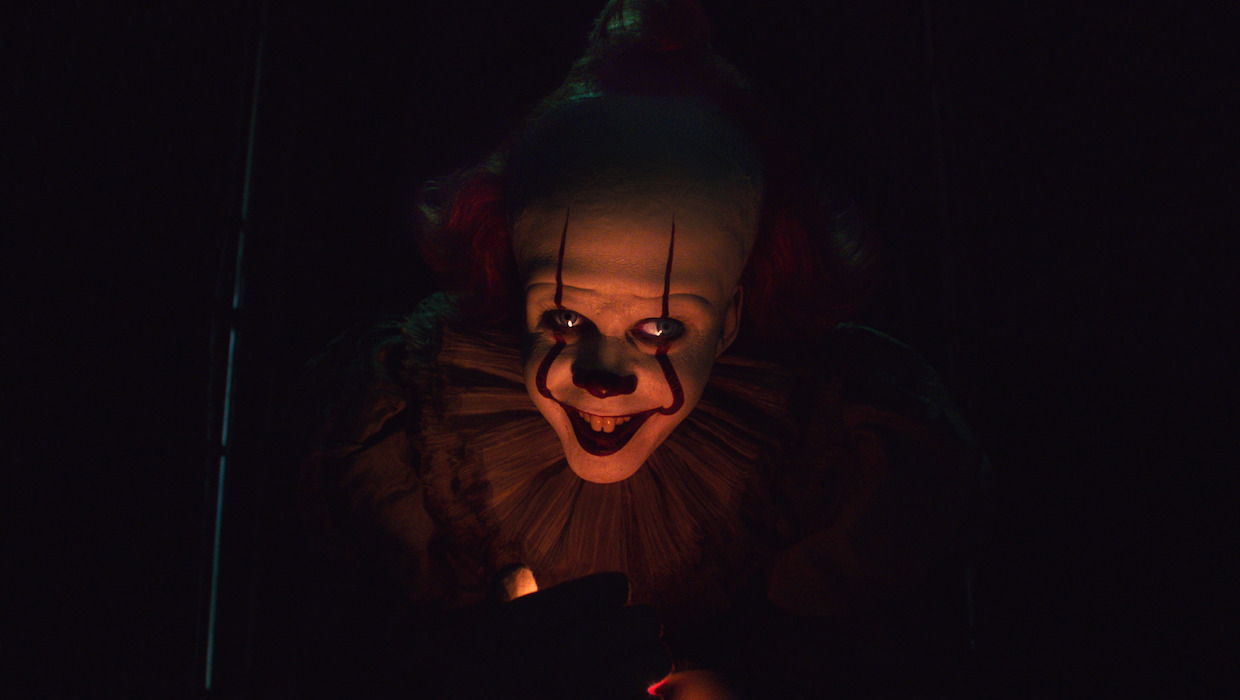 Bill Skarsgård in It Chapter Too

by Matt Mulcahey
in Cinematographers, Columns, Interviews
on Oct 24, 2019

Andy Muschietti, Checco Varese, It, It Chapter Too

Read a few Checco Varese interviews and you’ll quickly discover that the Peruvian cinematographer likes to talk about his job through similes and metaphors. He’ll compare cinematographers to chefs who shop at the same store and cook with the same ingredients, yet create distinct dishes. He’ll say that partnering with a director is like partnering in a marriage (sometimes for Varese that’s literally true–his wife Patricia Riggen is a director and frequent collaborator). He’ll tell you that a good scare is like an algorithm or that crafting a suspense sequence is akin to nurturing a plant.

For It Chapter Two, Varese’s simile of choice is scaling Mount Everest and then ascending anew every morning for 84 days. “At the end of each day it felt like we’d climbed Everest and then the next day I’d get to set and look up and there’s another Everest and [It director] Andy Muschietti is already on top looking down and saying ‘When are you going to come up?’” laughed Varese.

With It Chapter Two nearing the end of its successful theatrical run, Varese sherpa’d Filmmaker up the various Everests of completing the Losers’ Club’s epic battle with Pennywise the Dancing Clown.

Filmmaker: When I saw It Chapter Two there was a family with three kids—all of them probably under the age of 10—sitting in front of me. I think you traumatized those children.

Varese: My daughter is 12. She came to the set and to color correction. She’s a very smart young lady. She asked me, “When can I watch the movie?” I said “When you’re 25. Before that, over my dead body.” (laughs)

Filmmaker: Were you into horror films growing up?

Varese: I wasn’t when I was a kid, I wasn’t when I was a teenager, and I’m not now. It’s not my genre [as a filmgoer], but as a filmmaker I’m fascinated by the precision that a scare has to have. A scare is an algorithm. Horror is not a loose genre. It’s not like you roll the camera and something happens in front of it and it’s magical. You have to build a scare. You have to create it. It’s like a plant. You have to give it water and you have to give it sun, then all of a sudden the fruit comes. You do have to have an instinct for it, but there’s also a mathematical element to creating a good scare, and Andy Muschietti is a genius at that.

Filmmaker: Do you have a favorite scare in the movie?

Varese: I think my favorite is when James McAvoy’s character goes into the mirror room [at the Derry town carnival].

Filmmaker: I was going to ask you about that scene later, but since you brought it up let’s go ahead and dig in. What are the challenges of shooting in a space entirely covered in mirrors?

Varese: That’s a scene that’s kind of in the book but kind of isn’t and we were talking about where it should take place. Without thinking I said, “Why don’t we do a mirror maze?” As soon as I said it I thought, “Oh my God! I just shot myself in the foot!,” because it’s a nightmare. The process was very interesting, though. The art department came up with this to-scale mock-up that ended up sitting on a catering table. There were like 100 tiny mirrors in the model and we had a little camera—sort of like a lipstick surveillance camera—and we would walk it through and see where we saw the camera in the reflections, then we’d tweak the mirrors. It took us a couple of days to figure it out. I’m very proud because I think they only had to erase the camera and the operator maybe twice out of the scene. 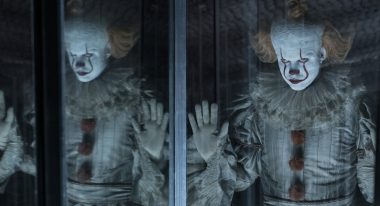 Filmmaker: How did you light that space?

Varese: We literally laid egg crates on top of the set—the same ones you would normally put in front of lights [to control the spill]—and lit it from above. We gave it this pulsing [effect], almost like a heartbeat, turning on and off, and that made it even scarier. We put Arri SkyPanel S30’s with a Cyan 30 filter dialed in and ran all of them to a dimmer board that was then sent to my gaffer’s iPad. He was controlling the lights from right behind the camera to very organically create the effect.

Filmmaker: When you got into the tighter shots were you bouncing fill up into McAvoy’s face from that toplight?

Varese: Actually, the mirrors took care of the bounce by complete serendipity.

Filmmaker: I was watching this video that Vanity Fair made featuring the adult actors and their kid counterparts, and the kid who played Eddie straight up has a mustache now. The kids changed so much between the chapters of It that they had to be digitally de-aged for the flashback scenes in Chapter Two. What does that entail on your end of things?

Varese: I was surprised by how little I had to do. The company that did it is called Lola. They started their business in beauty: you would do a Revlon commercial, give it to them and they would make it look fantastic. Now they’re specializing in de-aging characters. Sometimes on set visual effects would ask us for a plate in case one of the kids was thinner or thicker or their cheekbones were more or less protruding [than when Chapter One was shot] and they needed the background plate to be able to place it, but other than that it was just shoot it as is. It was very laissez-faire.

Filmmaker: For the flashbacks with the kids, you used Mini Hawk lenses, where the original film used the G Series anamorphics from Panavision. Vantage, who makes the Hawks, describes them as anamorphic/spherical hybrids. What exactly does that mean?

Filmmaker: So there’s no anamorphic element in the lens?

Varese: None whatsoever. It’s amazing. Also, the minimum focus is about nine inches. So you can almost touch the lens with your nose and you’ll still be sharp. It was the best of both worlds. The flashback scenes where we deal with the younger Losers’ Club were shot with those lenses and the present tense scenes were shot with a combination of Angeniuex short zooms and Leica Summilux lenses. 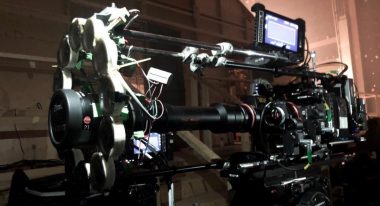 Filmmaker: Tell me about this crazy looking set up (photo above) from your Instagram feed.

Varese: This was for a scene where James McAvoy’s character goes to visit Mike, the [Losers’ Club member] who stays in Derry, and he has a hallucination. Andy wanted to get very close focus, so we put [a Leica lens] at the end of a snorkel lens about an inch from [McAvoy’s] nose. Andy wanted the light to move as if it was in a circle, a concentric ellipsis that starts slow and then gets faster and faster to enhance this feeling of craziness he’s going through. So, okay, how do you do that? My gaffer came up with this series of little LEDs that are rapid reaction, so you can turn them on and off in less than ten frames. In half a second they can go fully bright and fully dark. Our first rig was very rickety, so my gaffer went home and with his 3D printer made this circular [device] with holders for the lights that looked like Crème brûlée [bowls] and a space for that specific lens. It was fun to do it and the result was fascinating, but it’s not something I would suggest doing again.

Filmmaker: There’s another picture in your feed where it looks like there’s a filter tag on the matte box that says “Checco 1.” So what is the Checco 1?

Varese: Tiffen developed a filter in the 1980s called the chocolate filter. When you used it with film, [it] would give you sort of a sepia, old-fashioned look. If you used the filter and then started subtracting the yellow and subtracting the red in the color correction, it enhanced your greens and your blues but didn’t touch the skin tones. So I had Tiffen create—because they don’t make them—a chocolate 1/2 and a chocolate 1/4 that we used for all the daylight scenes with the kids. My crew named those the Checco 1 and Checco 2. 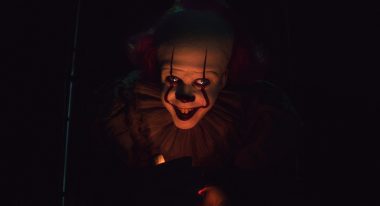 Filmmaker: Tell me about the scene where the little girl at the baseball game goes under the bleachers following a firefly and meets Pennywise.

Varese: The firefly is CG, but once it goes into Pennywise’s gloves the lighting is a completely practical effect. My gaffer came up with these RGBA LEDs that were attached to batteries we could control remotely. We hid them in Pennywise’s gloves and dialed in that warm tone. When he opens his hands the light pulsates and lights his face. 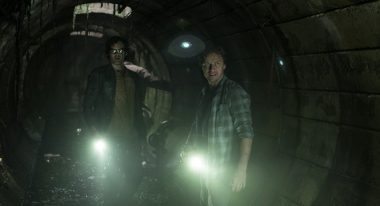 Filmmaker: Toward the end of the film the grown up Losers’ Club ventures into the city’s sewer system to confront Pennywise. The light is initially motivated by just their flashlights. You dealt with a lot of flashlights on the Chilean miner drama The 33. Did that experience help you with those sequences in It?

Varese: Just a little side note: if I read a script with a flashlight now, I’ll say no. (laughs) When the Losers’ Club arrives in that space, it’s lit by this very dim ambience. It’s movie dark, but not so dark the audience can’t see anything. It’s a very fine balance. You need a little ambience so the audience knows where they are, yet it has to be believable that the characters would need flashlights.

Filmmaker: When you have an ensemble movie like this—and maybe we can look at the scene where the Losers’ Club reconvenes at the Derry Chinese restaurant as an example—how do you decide what order to shoot the coverage in? I imagine that no one wants to be the last actor in a six-person scene to do their close-ups when double apple is on the slate. Is there a science to choosing the order of coverage to get the best out of a particular cast?

Varese: Yes. The answer is a straight up yes. Every DP has their own opinion and every director will tell you a different story about it and every occasion is different. But I’m a true believer—and this is completely contrary [to popular practice]—that sometimes you have to start with the close-up because in the close-up is where the performance is going to happen. Some actors are better when they are fresher and some are better when they’ve done it several times. Usually after a few days of shooting you learn that.

The Chinese restaurant was a very complicated scene because there were six actors and every one of them has dialogue, so you have to pay proper respect to each performance, and you also have to help out the editor and give them options and transitions. Then halfway through that scene it becomes [very visual effects heavy] and the VFX team would come in and say, “Hold on a second, I need a plate.” Eventually you start pulling your hair out. It was quite an enterprise.