“I Chose to Yell, You Chose to Whisper:” Zhang Yimou and Jia Zhangke at Pingyao International Film Festival 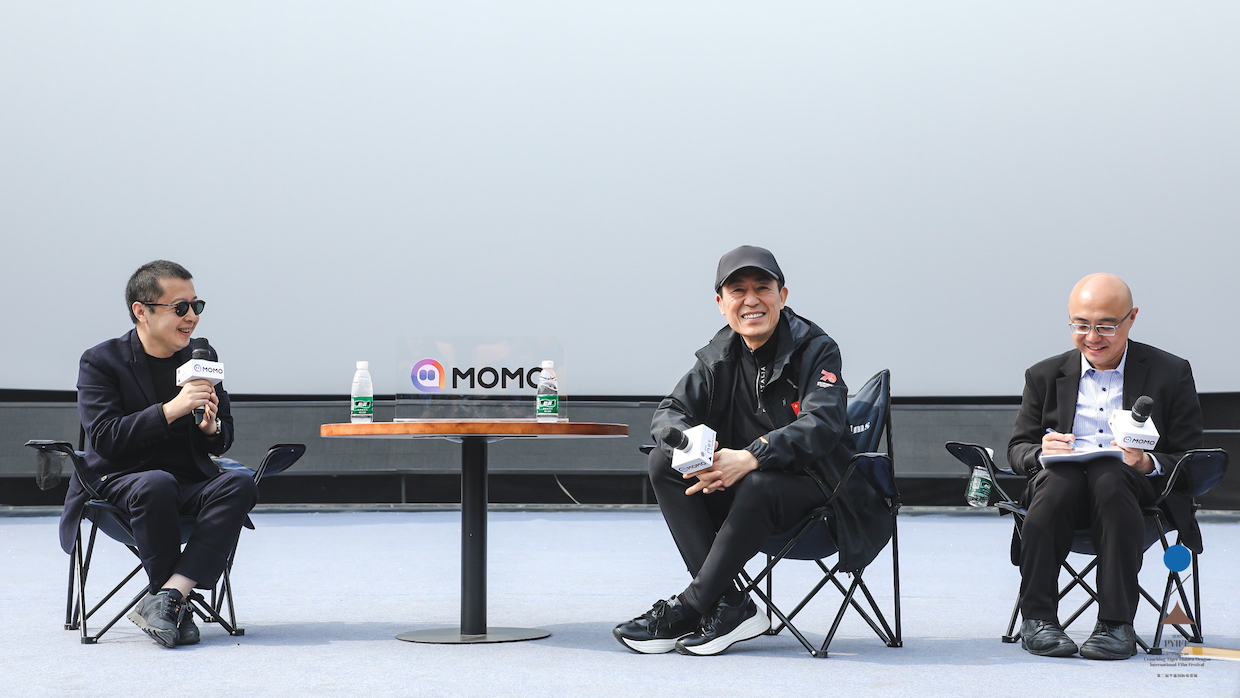 by Christopher Small
in Directors, Festivals & Events, Interviews
on Nov 26, 2019

I was loitering around the ticket office of the Pingyao International Film Festival, waiting for the day to begin. This was the second morning of the festival and, like all international delegates, I was still adjusting to being in China. That adjustment is at least threefold: to the time zone, to the food and to the place. Already I had seen Jia Zhangke, festival founder and one of the greatest of all directors, mobbed by legions of fans. I had seen Zhao Tao standing tall and beautiful in the queue for the opening film, apparently invisible to those around her. Bearded and turtlenecked, I had been eagerly asked for pictures by random people attending the festival. Now I found myself in a labyrinthine queue for tickets at nine AM that, judging by the rate people were emerging from the nearby ticket office, would last forever. A timid volunteer would later inform me, following a number of difficulties getting into any of the movies I was interested in, that it would be better to arrive at seven AM, a full two hours before the office opened. In Pingyao, I could tell, they do things differently.

I heard a shriek. Then another. Then an all-encompassing tsunami of shrieking swelled and crashed around us. Hundreds of adoring fans of one of China’s—and the world’s—most prominent directors, Zhang Yimou, began to spill through a nearby barrier, stampeding past bored-looking security standing uneasily in their black suits. The hordes of people scrambled past our queue to form a parallel entrance queue for his eleven AM masterclass. Within thirty seconds, they were gone. It should hardly be surprising that the man responsible for so many of China’s most prominent media events of the last thirty years—including the Jet Li blockbuster Hero (2002) and the Opening Ceremony of the 2008 Beijing Olympics—would inspire such feverish mania, and yet… it was.

Zhang himself appeared on stage in the festival’s main outdoor venue—a stadium-like space named after Jia Zhangke’s masterpiece Platform (2000)—in a baseball cap and sports jacket emblazoned with official typeface celebrating the 70th anniversary of the People’s Republic of China. Beside him was Jia, there to moderate the discussion. Together the two men were as much a study in contrasts as are—were you to compare them, as Zhang did in the masterclass—their respective bodies of work. Jia is diminutive, almost shrunken. Both men perch on camping chairs and face out onto their massive audience. Zhang notes the youthfulness of the audience and says that the crowd size before them is a testament to the enduring pull of the cinema.

As always, Jia has a childlike way of speaking and holding himself. He looks happy to be there—at foreign festivals, he can sometimes appear lost or indifferent, retreating behind the language barrier. The loving crowds for the masterclass and the home-grown nature of the festival have an obvious therapeutic effect on him. After all, this is the place where he shot his first major success. (When in Pingyao, it is easy to think that you are a million miles from anything. But Platform was shot in the city. Zhang’s Raise the Red Lantern was filmed just a 40-minute drive away—which, given the size of Shanxi Province, is considerable in itself.) Zhang, meanwhile, looks more like a football coach or professional golfer. His face is smooth and angular, like it was carved from granite. He speaks measuredly and with the air of somebody in total control, befitting the man who invented the now-ubiquitous blockbuster form in China. As he sits there and elaborates on his working history, it is hard to imagine his heartbeat raising above 50 bpm.

Zhang remembers having to sell his own blood to buy photographic equipment when he was younger. “People had no long-term plans and ideas for my generation at that time,” he says, referring to the era in which he grew up. “Drawing and taking photos was a hobby to kill time in the dull life in the factory.” The reforms in China that came after Mao Tse-tung’s death set Zhang and those other young artists around him on a completely new path, a collision course with what Zhang calls their destinies.

As a young amateur photographer he applied for a place in college to study his craft. He admits he wasn’t good enough and failed to get in. He tried again and failed again. Then he tried to get onto another course to study sports; he also failed at that. With the loosening of restrictions on students and workers after Mao’s death, it became an imperative for many young people of the time to go to college to, as Zhang put it, “escape those factories.” So, faced with little other choice, he applied for a cinema course, got in and threw himself into the minutiae of the craft.

By chance, Zhang’s reminiscences mirrored those of festival director Marco Mueller, who was studying in China before Mao’s death and remained there after it. In an interview, Mueller told me that the effect in 1976 and 1977 was enormous; suddenly, the libraries that were closed to foreigners or certain students opened their doors; and a serious wealth of classic Chinese films—buried for years by the regime but thankfully not destroyed—themselves became available to those interested. This societal transformation was overwhelming in Chinese cultural life, and both Zhang and Mueller are first generation products of it.

These days, as evidenced by his attire, Zhang is closer to the Chinese Communist Party, content to produce work that pleases them. Even still, showing his work is not without its challenges. “Technical problems” was the problem cited for the opening film of PYIFF being pulled—the same euphemism was given for the cancellation of Zhang One Second as the opening film of the Berlinale 2019 just days before its premiere. One doesn’t have to have a particularly industrious imagination to understand why a film about the Cultural Revolution—even under the guise of what advertising minded journalists might call “a love letter to the cinema” and by one of the country’s most respected and most politically responsible filmmakers at that—might face this treatment.

Jia, who has also in recent years managed to deftly stake out a position in the Chinese film industry allowing him to work relative peace, emerged a decade or so after Zhang began making movies. Zhang speaks reverently of his host, fellow filmmaker and on-stage moderator, but contrasts his own involvement with cinema with Jia’s lifelong cinephilia. He reflects on the first time he saw Jia’s Pickpocket (1998) in a crowded, smoky room projected from a 16mm print. “I loved the film. But there is the whole idea—I mean, the difference between us. I chose to yell, you chose to whisper. Both films reveal who we are, it has the same effect.” Zhang details an anecdote that illustrates the point. When he was making his first film Red Sorghum (1988), Zhang wanted to add more and more trumpets to the soundtrack as well as the solo trumpet playing the melody. “It will be too noisy, too overwhelming,” cautioned the composer. “Noisy? Overwhelming? Perfect. Let’s do it.”

Zhang came into filmmaking by mistake, as a product of his own admitted academic inferiority. He only developed a serious interest in it later. He had a remarkable and restless creative energy, as well as an unwavering curiosity about the technical aspects of photography and filmmaking. Later, as Zhang was establishing himself as one of the key creative forces in the Chinese film industry in the early-to-mid 1990s, the young Jia was getting an education by bumming pirated Bresson and Antonioni videotapes from street sellers and poring over them at home. Another contrast. Jia is more philosophical, Zhang speaks about movies like sports: “Once you start you really never can stop.”

“Creation is part of my life,” Zhang says. For him, youth—he nods to the audience—is the key to his success. He is healthy enough to work like a young person, to question himself with each film as if it is his first opportunity to make one. He has kept up a steady rate of production of around a movie a year which, when considering the scale and sophistication of these works, is quite a feat. In the pipeline this year are three new movies, the first of which is the aforementioned One Second, still unreleased at the time of this writing. The other two are less personally motivated genre films—one a crime film, the second a spy thriller, the first in pre- and the second in post-production. These two were, unlike One Second but like the majority of his output, written by others. Casually but euphemistically, he states that after three months of what he calls “adaptation”, they are ready to be made into a Zhang Yimou movie.

Indeed, Zhang beckons to the crowd, freely encouraging the young filmmakers in the audience to focus on writing screenplays. This, he says, is what is needed, especially for people like him. His rate of production only slows, according to him, when he cannot find a script that interests him.