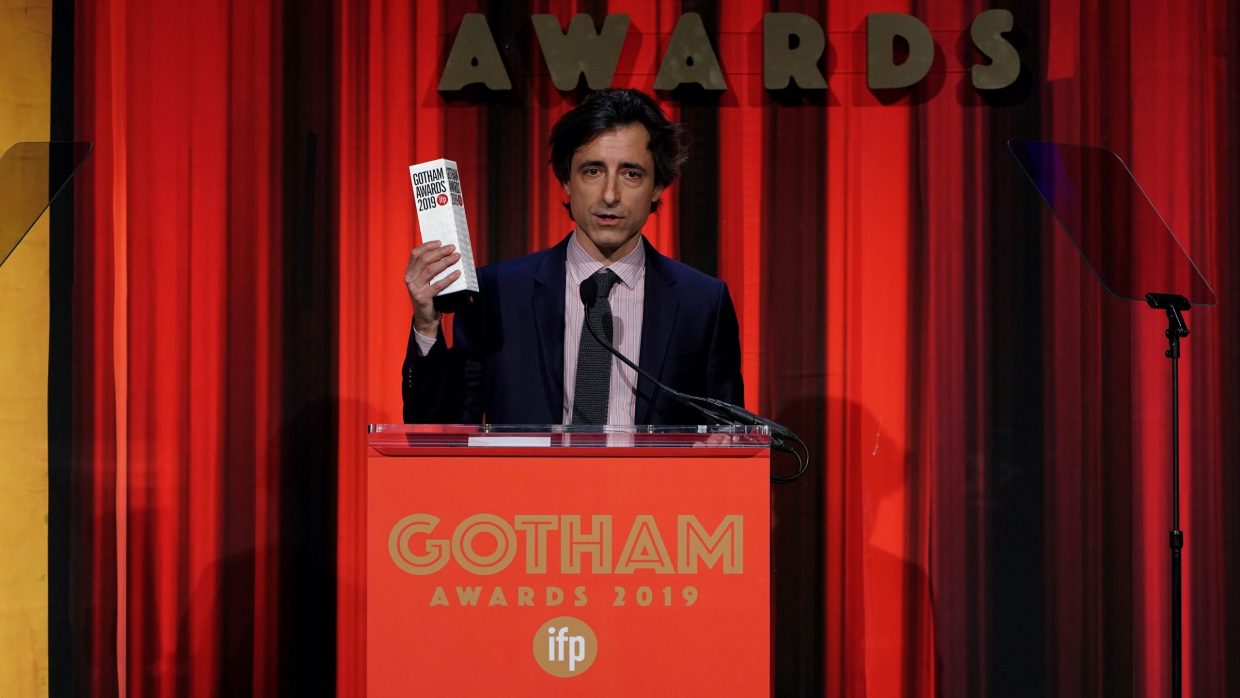 Marriage Story writer/director Noah Baumbach seemed a bit flustered his second trip to the podium last night at the 2019 IFP Gotham Awards. Minutes earlier he had accepted the Best Screenplay Prize and, in prepared remarks, thanked his various collaborators as well as Ted Sarandos and Netflix — not just for financing his film but saving the Paris Theater too. But when Natasha Lyonne announced Marriage Story for the Audience Award, Baumbach perhaps began to realize that he hadn’t written enough speeches for the evening. “I hope you all remember what I said in the last speech because it’s still relevant,” he quipped. Baumbach would return to the stage twice more, winning Best Picture and, in a very funny (and clearly prepared) speech given with Little Women director and partner Greta Gerwig, introducing Gotham Tribute honoree Laura Dern. The latter saw Baumbach and Gerwig in matching Laura Dern sweaters and reading each others comments, with Baumbach talking about idolizing Dern as a youth and growing up into a lanky blonde actress and Gerwig recalling her days as a 16-year-old Brooklyn boy with a picture of Christie Brinkley in her wallet. As for Dern, she thanked the incredibly impressive list of directors she’s worked repeatedly with, as well as her parents, who, she said, conceived her on a Roger Corman set.

Baumbach would also receive a shout-out from Adam Driver, who won Best Actor for his work in the movie. (Driver’s award was presented by Jennifer Lopez, whose relaxed star power silenced the room’s low-level chatter.) 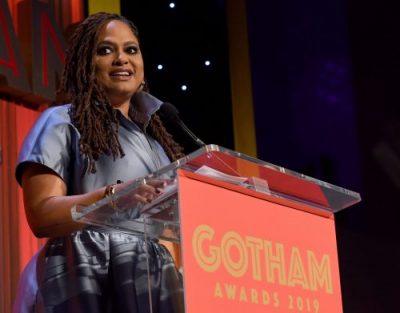 Marriage Story‘s four awards were part of a great evening for Netflix, which was also behind Best Documentary winner American Factory and Breakthrough Series, Over 40 Minutes winner Whey They See Us. The latter is Ava DuVernay’s limited series about the Central Park Five case, just one of a collection of works that garnered DuVernay a Gotham Tribute last night. In her speech, she recalled first-time director advice she gave to Jinn director Nijla Mumin, which included remembering the message you want your film to convey every day on the way to set, to treat all crew with respect, to change your socks at lunch (you’ll feel like a new person in the afternoon, she said), and to continually “hydrate and moisturize.” 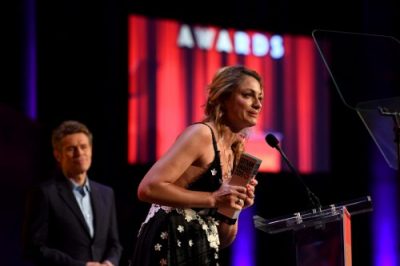 Other notable awards included writer/director Laure de Clermont-Tonnere, who scored the Bingham Ray Breakthrough Director award for her flinty, sagacious prison drama, The Mustang, and Awkwafina, who won Best Actress for The Farewell. “I’ve never won anything, not even an argument in Instagram comments,” she joked. Filmmaker Jason DaSilva received the Made in New York Media Award, telling the audience the story of being diagnosed with MS at 25 and then embarking on his journey as a filmmaker and an activist.

For the IFP Gotham Audience Award, presented by Natasha Lyonne

The Audience Award was voted for on-line by IFP members.

Awkwafina in The Farewell
Released by A24

Taylor Russell in Waves
Released by A24

Laure De Clermont-Tonnerre for The Mustang
Released by Focus Features