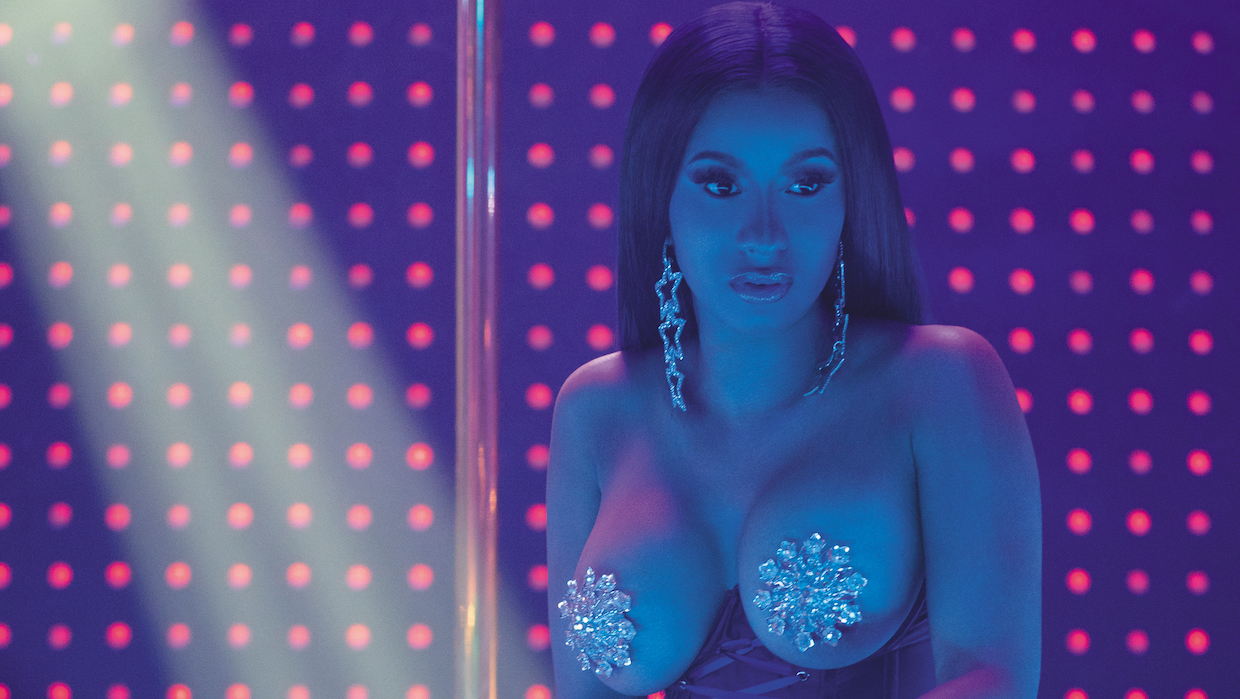 Cardi B in Hustlers

Hustlers, Lorene Scafaria’s adaptation (from a 2015 New York article by Jessica Pressler) of the real-life tale of savvy strippers scamming their wealthy clients in the wake of the 2008 financial crisis, is one of the year’s top crowd-pleasers, and its giddy garishness is expertly manifested in the costumes worn by the all-female primary cast. Early on, veteran stripper Ramona (Jennifer Lopez) wraps her sumptuous fur coat around the considerably less confident Destiny (Constance Wu) in a moment of feminine bonding and reassurance. The scene has elicited spontaneous clapping from audiences—not just for Lopez’s considerable charisma, but for her unforgettably bold outfit. Costume designer Mitchell Travers, whose previous credits include Late Night and Eighth Grade, had created the ideal wardrobe for a neon-soaked, decadent world.

The world of strip clubs carries with it a lot of preconceived notions of tackiness, and Travers was determined to subvert those clichés. One of his goals was making it so that “you could understand when the girls were using their clothes to be stereotypical.” He elaborates: “When you see Destiny in one of these incredibly revealing outfits, you recognize that she’s chosen to look like this because she’s smarter than the people looking at her.” For the characters’ devious schemes to work, they have to take a more-is-more approach to femininity. Most films featuring strippers have “really one-note costumes that are all about the shock value,” says Travers. While the costumes in Hustlers may be revealing, they’re not used solely for objectification. Travers’s creative decisions were informed by the feminine energy on set, and he held fittings in a low-lit room with a neon “Girls Girls Girls” sign to set a sultry but cozy mood. As he describes it, with so many women working onscreen and off, a large part of his job was “following their lead, understanding the women that they were creating and figuring out how my work could support that.”

Hustlers posed a unique set of challenges as a film set in the fairly recent past. It’s no secret that costuming for stately period pieces generally receives the most notice during awards season, but as Travers points out, “There’s an incredible amount of hard work done in contemporary film design that’s not viewed under the same lens.” While most viewers will remember the fashions of the previous decade, “it’s not a time period that is in vintage stores or costume rental houses.” The designer’s creative process involved a deep dive into the aughts. “I treated it like a period movie,” he says. “You research as much as you can about what people were wearing and plaster up photos on the wall, then really immerse yourself into it so that you start to recognize trends.” Travers became attached to the decade’s questionable style. “It’s an odd thing to feel attracted to that period because it was a really horrible time for fashion,” he says. “But I was falling in love with some of the trends that I was finding.”

The fashions outside the strip club were also informed by real trends. The seemingly incongruously high heels Destiny wears to a job interview were a circa 2008 design by Brian Atwood. “We looked forever to find them,” Travers says. “It’s funny because to a contemporary eye, they read as really high heels. If you look back at the time, that was the shoe of the moment. Professional women were wearing a three-inch platform.” While some of the skimpy costumes onscreen might seem like things one could easily buy at the local sex shop, Travers’s attention to specific period detail is essential. Around two thirds of the costumes were purchased, while the rest were designed. “I canvassed everywhere I could possibly Google to find these clothes,” he says. Early on, he ran into a challenge: These clothes are decidedly not built to last. Travers tried to approach the stripper characters as though they were athletes (which, judging from Ramona’s introductory pole dance, isn’t too far off) and had to make sure all the costumes he sourced could endure the rigors of stripping. “They were definitely put through the ringer on this,” he says, but look pristinely over-the-top throughout.

Hustlers gained verisimilitude from its real-life stripper consultant, Jacqueline Frances, whose professional handle is Jacq the Stripper. “She became a wonderful resource for me,” says Travers. “She was incredibly giving of her experience. With my costume background, I imagined some things would be trickier, like we’d need to have hidden hook-and-eye closures and things like that. And she was like, ’No, it’s much more about untying and being able to use your clothes in a way to stretch time and build anticipation.’” These shimmering, skintight costumes demand to be worn with confidence. The women in the film all know how to use fashion to their advantage, both inspiring lust and projecting power. As Travers succinctly puts it, “They’re dressing for business.”