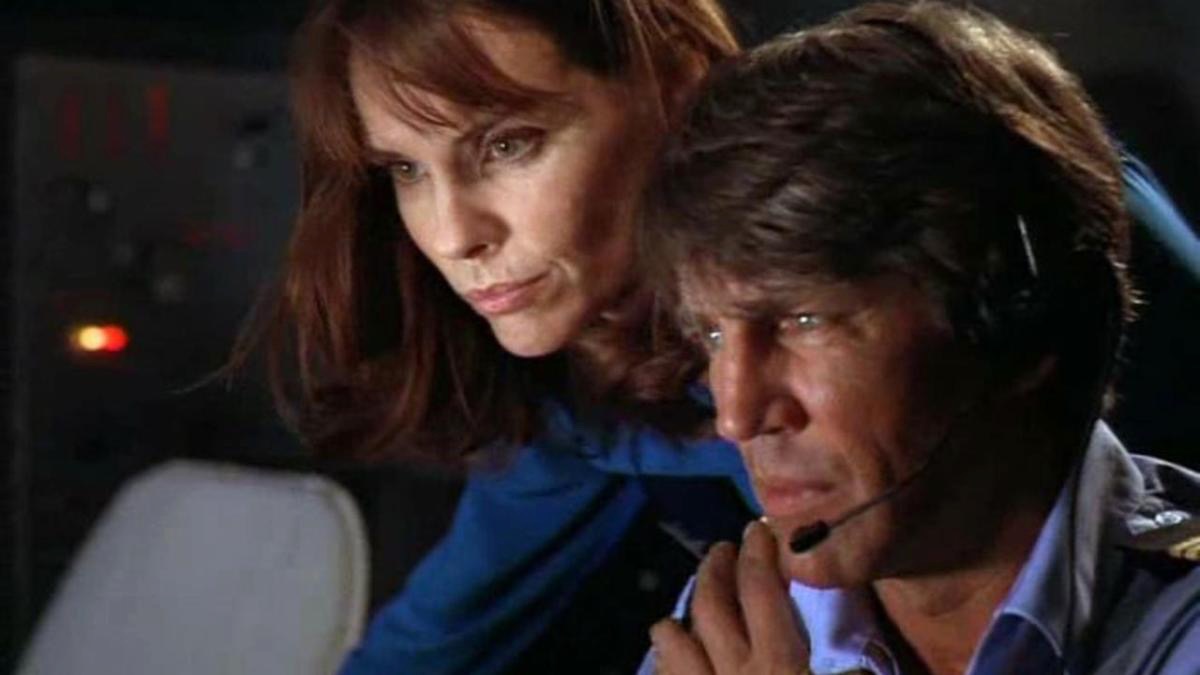 One of the more interesting experiments in mid-2000s cable television was Mick Garris’ Masters of Horror anthology for Showtime, a series that lasted only two seasons but yielded terrific work by John Landis, Stuart Gordon, John Carpenter, John McNaughton, and Garris himself. It’s now streaming free on the advertiser supported platform Tubi, and many of the episodes are well worth revisiting – particularly Joe Dante’s The Screwfly Solution, an entry from season two that presciently taps into current anxieties relating to both the coronavirus and the #MeToo movement. The movie begins with a series of unprovoked assaults on women by men who are either aroused or threatened by the women’s sexuality; as the attacks increase exponentially, a pair of scientists played by Jason Priestley and Elliot Gould realize that a virus is repressing men’s sexual impulses and converting those impulses into murderous ones. The virus, which Gould believes to have been created with the intention of wiping out the human race by killing off all the women, spreads quickly, and before long Priestley himself is infected. This allows Dante and screenwriter Sam Hamm to insert some poignant romance into their tale, as Priestley’s wife (Kerry Norton) is forced to defend herself and her daughter from the man she deeply loves.

The whole movie is incredibly unsettling thanks to the pervasive sense of hostility that Dante creates by presenting the chauvinistic behavior that women endure on a daily basis as a starting point for heinous acts of physical assault; every time a male character leers at a woman’s skirt or whistles at her from the side of the road, it’s a potential prelude to violence. Dante and Hamm view everything from religious fundamentalism to road rage as symptoms of a disease: the virus in the film is a metaphor for the kind of intolerance and sexual repression that can lead to widespread domestic violence in our own culture and the stoning of women in Islamic countries. This is ambitious stuff for an hour-long cable TV episode, but Dante and Hamm never lose the balance between social satire, interpersonal drama, and apocalyptic horror—their film is a triumph of concise narrative construction. It works as a tragic love story, as an end-of-the-world virus film like 28 Days Later or In the Mouth of Madness, and as a chilling examination of all that is sick and repressed in our “free” country. It also makes bland conformity in the form of its male characters as frightening as it was in the original Invasion of the Body Snatchers, an obvious influence on this film. Yet in keeping with Dante’s sensibility, the movie is quite funny in places as well: a scene in which Priestley and Gould brief the Department of Homeland Security is worthy of the director’s earlier made-for-cable masterpiece, The Second Civil War.

A very different but equally praiseworthy example of political television arrives on DVD this week with the release of Madam Secretary: The Complete Series, a 33-disc set that’s perfect binge viewing while we’re all in isolation. The show stars Tea Leoni as Elizabeth McCord, a former CIA analyst who is pulled from her life in academia to serve as Secretary of State under a President (Keith Carradine) with whom she used to work at the agency. Her husband Henry (Tim Daly) is a religious scholar and on-again, off-again CIA operative himself, and their marriage gives the series one of its three key focal points, the other two being the inter-office politics Elizabeth must navigate at the State Department and the foreign policy ramifications of her work. These three interlocking components work together exceptionally well thanks to series creator Barbara Hall’s skill at tying them all together thematically even when they may seem unrelated; the political, professional, and personal aspects of Elizabeth’s life are all linked by Hall’s sophisticated examination of provocative ethical issues. The conception of Elizabeth as a CIA spy and an academic and a political figure is brilliant in the way that it sets her up to be a one-woman embodiment of moral contradictions and paradoxes; positions she may have held with conviction in one phase of her life are no longer viable, and the ways in which Hall and her cowriters challenge both the character and the audience to question black-and-white assumptions are unusually complex. The series also boasts a deep bench of noteworthy directors, from feature film auteurs like Martha Coolidge and Maggie Greenwald to ace episodic helmers such as Rob Greenlea and Dennie Gordon, making it as aesthetically pleasing as it is intellectually nourishing. The new DVD collection includes hours of bonus features in the form of making-of documentaries and deleted or extended scenes, further illuminating Hall and her collaborators’ intentions.

Speaking of great television directors, a pair of made-for-TV movies by one of the medium’s finest is currently streaming on Amazon Prime. In 2001, a year before he would reinvent the action genre with his innovative work on 24, Jon Cassar directed two immensely pleasurable and satisfying adventure films back to back, each on a 20-day schedule. The first, Rough Air: Danger on Flight 534, is a real find, a textbook example of low-budget ingenuity in which Cassar transcends his limited resources with the kind of intricate blocking and dynamic framing one associates with the best work of Renny Harlin and John McTiernan. The basic story, in which Eric Roberts plays a troubled pilot on administrative leave who finds himself flying a plane endangered by mechanical failure as well as various human variables (an erratic copilot, a murderer being transported, etc.), recalls the Airport movies of the ’70s as well as later variants like Passenger 57 and Turbulence. Yet Cassar and writer Jim Makichuk breathe new life into the old formulas through the sheer elegance of their craft, with Makichuk keeping a large number of storylines and supporting characters in perfect structural harmony while Cassar deftly shifts point of view via his expressive compositions, graceful camera moves and unerring lens selection. The movie Cassar directed on the heels of Rough Air, Danger Beneath the Sea, is another study in confined action; a riff on Crimson Tide about tensions aboard a nuclear submarine, it’s a clinic in how to tell a story in tight spaces without disorienting the audience or succumbing to visual monotony. A substantial portion of Danger Beneath the Sea takes place on the sub and most of Rough Air takes place on the plane, so they’re terrific movies for independent filmmakers to study when thinking about how to make small stories seem expansive. They’re also nifty escapist entertainments at a moment when we could probably all use them.