“Take Control Over the Color and Build That Into the Sets”: DP Frederick Elmes on Hunters 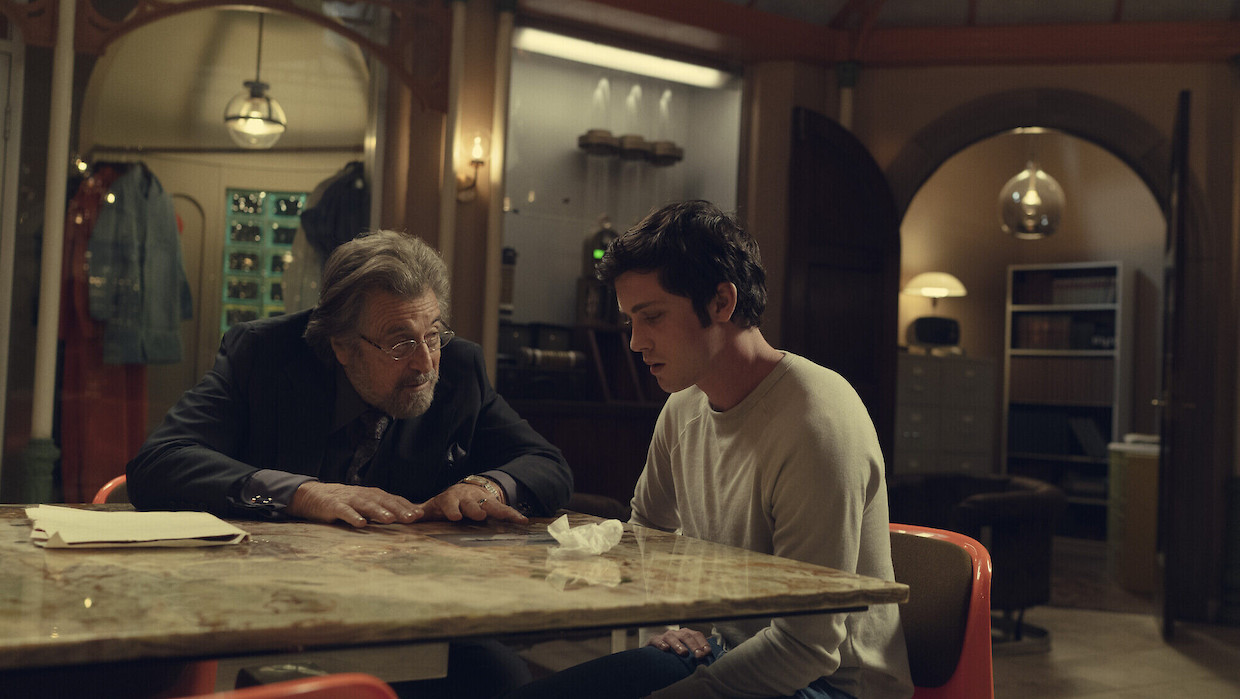 by Jim Hemphill
in Cinematographers, Columns, Interviews
on Apr 30, 2020

Early on in his career cinematographer Frederick Elmes worked as a camera operator for John Cassavetes and was a director of photography on David Lynch’s debut feature Eraserhead, laying the groundwork for a career that would absorb and expand upon both those influences. Like Cassavetes, Elmes is a filmmaker who knows how to frame and showcase great performances; his multiple collaborations with Ang Lee, Jim Jarmusch and Tim Hunter have yielded career best work from Kevin Kline, Bill Murray, Joan Allen, Matt Dillon and many others. Yet like Lynch, Elmes is also supremely attuned to the visual properties of cinema and the rewards of a precise aesthetic design; one could take virtually any frame from Blue Velvet or Paterson and hang it on the wall. Elmes’ latest project, the 90-minute pilot episode of the Amazon series Hunters, is one of his most stunning pieces of work to date, and one that exemplifies his ability to express character and theme through color and light. A period piece following a group of Nazi hunters living in 1977 New York, creator David Weil’s series is an audacious blend of social satire, vigilante action and coming of age story, with the young protagonist played by Logan Lerman becoming an unlikely hero under the tutelage of his Holocaust survivor grandfather (Al Pacino). Working with director Alfonso Gomez-Rejon, Elmes employs a vivid color palette and kinetic camerawork to accentuate the intense emotions and provocative ethical questions at the heart of the piece; shot for shot, it’s one of the most interesting and original things I’ve seen on television this year. I spoke with Elmes by phone to get some insight into his approach and to hear how his early years with Cassavetes continue to inform his work.

Filmmaker: How did you get involved with Hunters, and what was the initial appeal?

Frederick Elmes: It came to me from Alfonso. He and I had wanted to work in the past and it never worked out date-wise, but I was always interested because I really liked Me and Earl and the Dying Girl. I thought it was a very sweet film that had a nice quality to it because it combined sensitivity toward characters with some pretty active camera work. There was clearly a lot of forethought in the planning and the photography, the visualizing of the story, and that appealed to me. In the case of Hunters I liked the idea of it being almost like a superhero story, with a nerdy young guy who turns into a hero somewhat against his will. I had this notion that it could be kind of a graphic novel, which Alfonso was completely on board with.

Filmmaker: Did you have any specific graphic novels or other visual references in mind?

Elmes: I was thinking of some the early Bruce Davidson photographs of New York City, because I was actually in New York during the early ’70s and experienced the graffiti on the subways and the trash in the streets and the unsafe neighborhoods everywhere. The way the city was falling apart was part of my background and my early days there. In terms of graphic novels, I had seen some pieces by Neil Gaiman that combined colors in interesting ways; he and the illustrator created real drama in the lighting on faces. I took some sample pages to Alfonso and said, “We could try something like this. We could push these two colors together or try some things out,” particularly in some of the sets we were building around the Batcave, the place where the hunters hang out that’s part of Al’s mansion in the city. We were fortunate to be able to build things and hence design into them some opportunities for lighting and color we might not have had otherwise.

Filmmaker: Yeah, when I was watching it I kept thinking that you and the production designer Curt Beech must have worked very closely together on those colors.

Elmes: Curt did a fabulous job, and I would also credit the costume designer John Dunn, because we all spoke together about what colors could mean in the story emotionally. Curt did a wonderful, wonderful job because he designed the sets with built-in flexibility and opportunities for light. That Batcave set, for example. We had a practical location that was Al Pacino’s mansion, where his character lives. The upper floor, this kind of secret chamber, was something we could build. It had to be discovered by our young Jewish superhero along the way, so we were able to make it dark and shadowy and then reveal more and more of it each time they went back. The idea was that it was based on a kind of a solarium, almost a greenhouse on top of the building, and that was Curt’s notion so that it had some skylights and opportunities for the outside to come in in terms of the light and the color. It was all secured because of this whole notion of hunting and protecting the valuable research they had done on the Nazi criminals, so it had not just clear windows, but glass blocks. Having all those elements together, including skylights, which Curt had managed to secure and control as well, allowed me many opportunities, to create different moods and different colors, to use color creatively to help push or support the emotion of a given scene.

Filmmaker: The use of color is really, really bold and I was wondering how you achieved that look photographically in terms of LUTs or filtration or whatever you did in the grading.

Elmes: It’s actually built into the photography. That was what I brought to Alfonso in the beginning. I said, “We want to present a look and a feeling in the pilot that we have control over, that the other episodes can use and follow as a kind of a blueprint. I’d like to build it into the lighting.” So it was not a matter of choosing a particular LUT or fancy footwork in post-production, it was  designing a color palette we could use in the original photography. I sat down and put together some colors, ran what I came up with past Alfonso and Curt and they were on board with it. Curt created those opportunities I mentioned in the sets that he built. We used modern LED lighting to take control over the color and build that into the sets, so that the other directors and cinematographers that followed us would have that to take advantage of.

Filmmaker: What kind of camera did you shoot on?

Elmes: I shot with an Arri LF Alexa because I like the way that the Alexa sees color. I’m familiar with the Alexa cameras and they see things very, very nearly the way I see things when it comes to color and subtlety. So I could count on that. The LF is a larger chip camera, a larger format camera, and the Cooke lenses that we used had what I would describe as a gentle and sweet quality to them. I used a little bit of a net type diffusion over the lens just to take some of the extra sharpness off, and we tended to work with the lenses pretty wide open to allow the background to fall off and put the attention on the actors in the foreground. All of those things combined helped us give a particular look to the pilot.

Filmmaker: You’ve worked with so many great directors going back to your early days with John Cassavetes and David Lynch, and later filmmakers like Jim Jarmusch and Ang Lee. What do you look for in a director-cinematographer relationship? What can a director do to help facilitate your best work?

Elmes: I think my best work is done when the director feels free enough to say anything. There really aren’t any wrong answers to the questions, and I ask lots of questions and try to dig deep into why the director chose that story and what interests him or her enough to really throw themselves at it. I’m really just a support member along the way and find it very satisfying to be able to help any director visualize a story. But the key is open communication. All that time prepping really is very well spent; all those hours riding around in a van to and from locations is a perfect opportunity to ask lots of questions while I have the director as a captive audience.

You mentioned my early days with Cassavetes, and he was a favorite of mine – I was a fan of his movies well before I met him. I noticed recently that you had written about Mikey and Nicky, and it’s a favorite film of mine. I actually worked on it very briefly as a camera operator because the film was going very, very slowly. The production was drastically behind. The studio was extremely upset with Elaine May for taking forever in the way that she directed, and she gave up some scenes to John Cassavetes to direct as a kind of second unit. I worked on some of them because I knew John and he asked me to come on board. And just being there on the set and watching this thing unfold and watching Elaine May say, “Okay, just keep the camera rolling, keep it rolling,” and then the director of photography would say, “Well, he’s left the frame, the actor left the frame and we cut the camera.” She said, “No, no, he might come back.” [laughs] I saw Elaine May just a couple of months ago when they had a premiere screening of Hunters. Elaine came because her daughter is in the pilot, and I reminded her that I’d been around on Mikey and Nicky.

Filmmaker: It must have been amazing to be a young filmmaker working under Cassavetes when he was in his prime. Do you find that the lessons you learned from him still apply to work you do now?

Elmes: They completely do because he was the ultimate actors’ director and cared so much about that and to hell with all the technical stuff. He hired us young students to work with him on his movies because we didn’t know what it was to set up a backlight and make a film look like a Hollywood movie. We didn’t care about that stuff and he loved it. He just loved that we were learning as we went along. The films had really no polish, it was just raw emotion. That’s what he was after and that’s what I learned. I had the wonderful opportunity to work on a movie with John Cassavetes at around the same moment that I worked with David Lynch on Eraserhead, and if there were two more different filmmakers I don’t know who they would be. So to see that all happen and unfold in front of me, taking it all in without having any idea at the time how much I was learning, growing up making films, it was a wonderful opportunity.