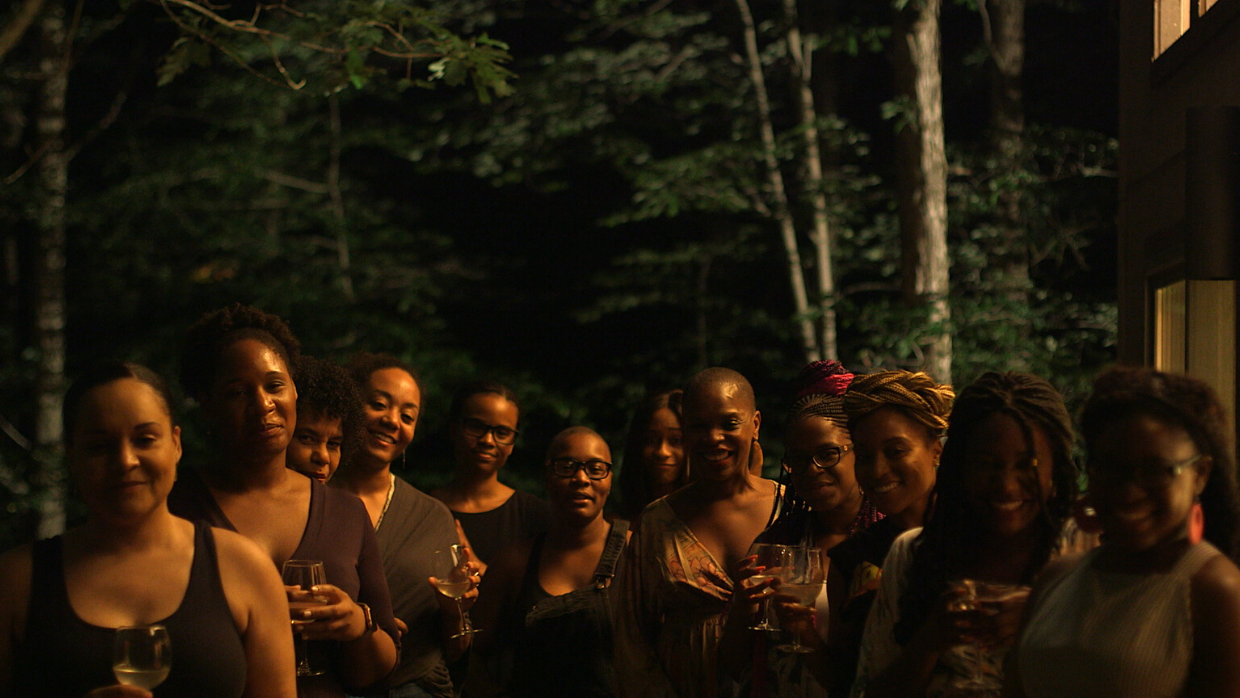 In the midst of the global COVID-19 pandemic and the ever-present, centuries-long war on Black bodies, I’m writing to you about a niche, indie webseries called The Retreat. Why?

Because it’s our show, and it matters.

When the protests simmer, you may ask yourself, how can I help NOW? What can I do in the in-between? In those days, weeks, months when racial tensions aren’t dominating the headlines, in the the moments when the revolution isn’t televised for the mainstream…How can I become a proactive force in amplifying Black voices?

Naturally, dismantling systems of oppression is monstrously daunting in scope, but if you want to pare it down to some concrete action items as part of a multi-faceted approach, here’s one thing you can do: Advocate for Black women in creative spaces.

You’ve likely seen the HBO series, A Black Lady Sketch Show or Insecure, both helmed by talented Black women. These are vital examples of Black women creatives succeeding at the highest level, via a platform that’s given them the opportunity to do so. It’s inspiring to witness representation like this on a network such as HBO, but if increased visibility and truly reflective diversity and inclusion are the goals, we can all act as advocates by supporting Black women creatives, no matter the platform.

In 2008, I founded Nuanse Entertainment, a boutique film production company whose mission is to create colorful characters for every genre while contributing to the perpetuation of new narratives about the Black experience. Last year, my business partner, Ricki Lynée, and I were commissioned for a new project via Nuanse. We decided to move forward with a concept that had been percolating for a while–to develop a project with an all Black women cast and crew.

At the outset, we were thrilled by the prospect of creating The Retreat, even as we anticipated some challenges. I recall a number of “well-intentioned” voices who told us staffing an all Black women project would be a fool’s errand. Why make things hard on ourselves if we didn’t have to? Finding a cast would be difficult enough, but an entire crew? C’mon. What’s more, one of the leading roles was written for a Black woman, over 50, with a physical disability. Are you serious?

A 2019 study titled “Boxed In” found among all programs (including broadcast networks, cable and streaming programs), that women fared best as producers (40%), followed by writers (35%), executive producers (30%), directors (26%), creators (25%), editors (21%), and directors of photography (5%). These figures provide a sense of the gaping disparity by genders, but do not translate how this functions in relation to people of color.

Yet, here we are, one year later with all eight episodes of Season 1 released and over 30,000 views.

Ricki and I served as the writers, producers and editors on The Retreat. One of the fundamental reasons behind making a show with a cast and crew of black women, was to connect with each other, not only for The Retreat but also for future projects. So, the next time there’s a new project looking for recs, we can point to a list of skilled Black women who excel in front of, and behind, the camera.

Seeing as only 5% of DP roles were filled by women, you can imagine what fraction of that percentage was filled by Black women (in fact, if someone has those statistics, please send them our way). That being said, one of the arguments used to dissuade us from staffing a show with all Black women was that we wouldn’t be able to find a Black woman as a Director of Photography.

Welp, y’all can stay mad ‘cause the brilliant Alexa Mignon Hiramitsu worked as our DP, and if there was an MVP award, she would’ve gotten it, hands down. The stunning portraiture on her website was our first indication that she would know how to imbue our images with the right kind of emotion for The Retreat narrative. What’s more, on set, not only did Alexa’s vivacious personality bring joy and life to work each day, her extensive experience as a professional lighting technician/union gaffer allowed her to problem-solve within our limited budget, while elevating the visual aesthetics of the show in a way we could only have hoped. We are blessed and fortunate to have worked with Alexa as our DP, and will continue advocating for the many Black women Cinematographers who deserve their opportunity to shine. The next time you consider hiring a DP for your project or know someone who is, think about how you want your world to look, and if the makeup of your crew works towards actualizing that vision.

On the casting front, as I mentioned earlier, we also needed to find our “Pamela Hairston” — a role written for a black woman over 50 with a disability. Some thought it would be impossible, but after much research, many phone calls, and lots of emails, we connected with Dr. Donna R. Walton, the founder of Divas with Disabilities.

The mission of Divas with Disabilities is to reshape what disability looks like by promoting Black and Brown women and girls with physical disabilities to ensure their identities are fostered in inclusive sources of mass media and popular culture.

Not only is Donna the founder of Divas, she’s also an amazing actress. From the first phone call, we were sold: she sounded like our Pamela, and her personal experience as an author, amputee and disability-inclusionist, offered exactly what we needed. The interesting part was — Donna hadn’t acted in a while, but not for lack of desire.

According to a 2016 report, only 2.4% of all speaking or named characters across 800 popular films were shown to have a disability. Again, these figures do not account for the compounded layers of discrimination disabled actresses of color face in the film and television industries.

After a recent Instagram Live event with Donna, she shared that even as a teenage amputee, she would walk proudly into auditions, only to never hear back from the casting agents. It was amazing to watch her grow as an actress even within the short amount of time spent on set. Looking back, although it took us some time to cast her role authentically, it was really just another piece of the producing puzzle that required our attention. If we were able to commit to authentic casting with our limited budget and resources, imagine what Hollywood could do with a genuine, long-standing commitment to diversity and inclusion.

Was helming an indie production with an all Black women cast and crew impossible? No.

Was finding Alexa and Donna a miracle? Maybe. Or maybe it was a result of believing in and prioritizing Black women in spaces where they are often treated as a last resort, or not at all.

As Ava DuVernay said, “My truth is that I don’t want a chair at the table or even three or even half. I want the table to be rebuilt in my likeness.” One of our long-term goals at Nuanse is to continue producing projects with all Black women cast and crews. We encourage you to look at The Retreat not only for entertainment, but as another way of protecting, encouraging and contributing to the ecosystem of true diversity and inclusion.

The next time you’re asking yourself how you can make things better–look around at the Black women already doing the work. Then tell a friend.