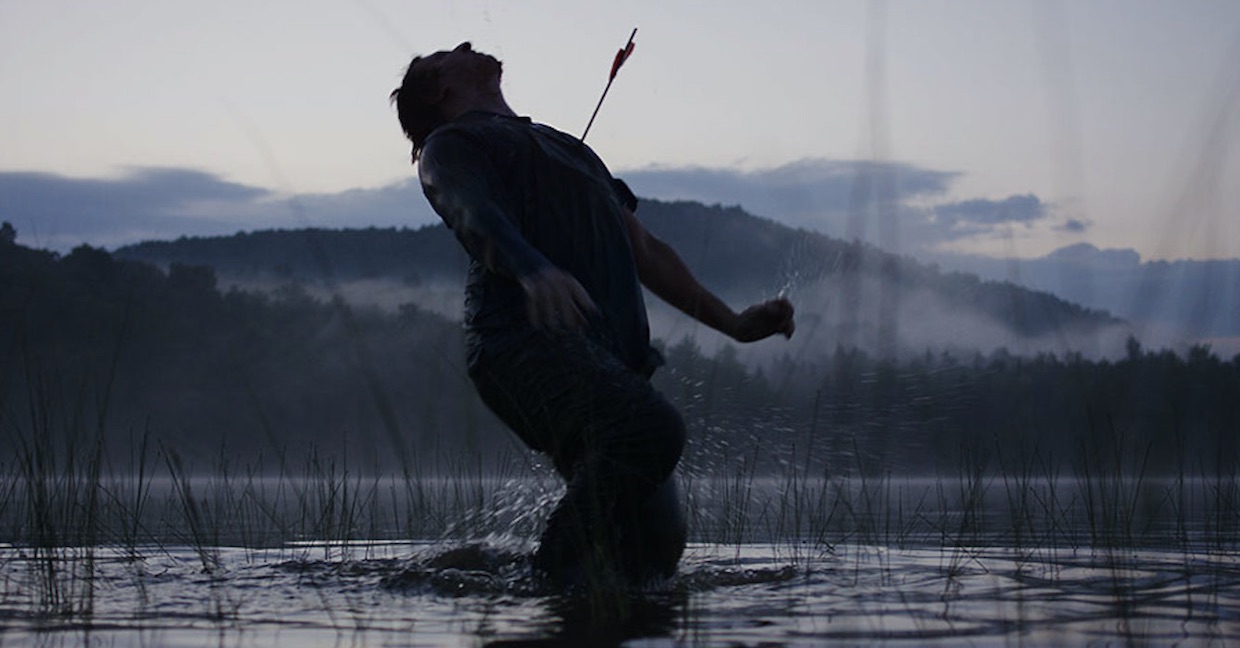 by Scott Macaulay
in Filmmaking, Production
on Aug 10, 2020

As studio and television filmmaking creaks back into production, a first wave of microbudget films made amidst the coronavirus-related shutdowns enters post. One such film is the horror-thriller drama Banishment, which launches today an Indiegogo campaign for its post-production costs. Shot in and around a secluded cabin in Lake Placid, New York for just $5,000, the film fashioned its own safe production protocols before official industry guidances, like the recent “Safe Way Forward” plan, were issued. Nonetheless, the basic tenets of today’s safe production — quarantining, social distancing, mask-wearing on set — were all adhered to. But one other element of today’s production plans — a separated pod system — wasn’t implemented simply because the shoot basically constituted of one pod. The five actors performed singly, and total crew, who wore multiple production hats, only consisted of five or so people.

It was April, 2020, just after New York passed its first month of stay-at-home orders. With New York experiencing thousands of new cases a day, writer/director Daniel Byers and producer Werner Joachim Traut, both Columbia University graduate film school students, had seen their Spring film school shoot cancelled. That’s when Byers quickly co-wrote Banishment with lead actor and co-writer Harry Aspinwall, and the three decided to embark on a production that would reflect in both practical and dramatic ways the pressures of the pandemic. Says Byers, “We asked ourselves, what kind of story could we tell right now? And how can we tell it safely?” Says Aspinwall, “There was this deep sense of uncertainty day by day. There was all this information coming out, and the only time we were all really interacting with people is through screens. There was a deep sense of not knowing where you stand in reality — not knowing who is going to be a danger to you, or whether you’re a danger to other people. For me at least, that provided the a big thematic jumping-off point.” Adds Byers, “Banishment deals with a lot of the issues we’re collectively trying to deal with as a society right now: isolation, loneliness, fear of the outside, exposure, getting too close, and [maintaining] love and trust when you can only communicate at a distance.”

At the start of Banishment, the film’s protagonist, David (Aspinall), has been secluded in his cabin for two years. An asymptomatic carrier of a deadly disease, he communicates with his researcher wife Sam (Anita Abdinezhad), who searches for a cure in a far-away lab, over video chat. Says Byers, “He has this careful routine set out by timers: wash, eat, exercise, draw his blood, and exchange that blood for food. Our story begins when he starts to suspect something’s wrong. Sam might be in danger, and this disrupts the careful balance of David’s life and exposes him to the dangers outside, to the killers and monsters that now stalk the earth.”

Conception to wrap was just six weeks. Screenwriting continued all through prep, a process that included the usual — hiring the (small) crew and and sourcing gear, which included a Mavic Pro 2 drone and a RED Epic — as well as staying informed about the coronavirus. “We studied the available science quite a bit,” says Byers. “It was pretty obvious even then that the coronavirus is an air-borne virus and that the main transmission threat is sharing unventilated air. And so we determined that our best way forward was, first of all, to limit the crew size to the absolute bare minimum. And the second was a quarantine-and-bubble strategy. There was a 14-day quarantine period for everyone before production began. Once we were on set together, the set was completely isolated from the rest of the world. We also did mask-wearing on set, social distancing when possible, had ventilation of indoor spaces, isolated ourselves in terms of our sleeping environments, which meant people had to sleep in tents. Werner slept in the laundry room.”

Says Traut, “We created a bubble for ourselves, limited contact points as much as we could, and we were serious about everyone who worked on the film quarantining for 14-days prior to coming, and once they arrived on set we were still conducting the same safety protocols. But our main advantage, as Harry said, was that we had this very small crew and we were crafting the story around similar themes that we were dealing with in real life. A lot of the drama in the film takes place through remote conversations, video chats, phone calls. We were using the real-world restriction we had making the film as part of the logic of the world that we were creating.”

One benefit the team had experienced was the ability to hire experienced crew who might not normally work on a microbudget production. Banishment had two DPs (Zachary Ludescher and Alexandra Gilwit) who worked sequentially but with a three-day overlap when one assisted the other for the shoot’s most demanding technical shots. Other times, though, the core filmmaking team pulled double or even triple duty. For the first week of production, Traut produced, was first AD and ran sound. At the shoot’s end, Aspinwall and Byers stayed behind to do pickup shots. “There were just the two of us for a couple of days, carrying the gear up mountain side for the last pickup shot. There’s a drone flying around and monitoring the characters that’s a part of the story. I was operating a camera, pulling focus, and then I had to fly the drone as well for that shot. So I was doing that with my teeth.”

In addition to production design, Christian Masters acted, did stunts as well as the makeup effects. He also traded off on kitchen duties. “I would be off in the woods building a set when I’d get a call and have to run back to block a stunt. As they filmed, I’d be mixing up a batch of molasses blood in the sink while chopping vegetables for chili.”

About the sets, Masters says, “The set builds were accomplished by visiting a rural hardware store and figuring out how to make a sterile quarantine room or camp site with what limited product they had. This process mirrored the way in which our protagonist must have scavenged materials — immersing not only the actors, but the production crew in the world presented by Banishment.”

The pandemic also impacted some of the usual rental and supply houses Masters might normally use for a show like this. “Many suppliers were closed or facing extreme shipping constraints,” he explains. “As such, almost all materials had to be locally purchased, from using unflavored gelatin bought at the supermarket to build scars and textured wounds, to making a complicated phlebotomy rig by taking apart an actual medical set and substituting parts with a basting syringe ‘pump’ and carefully replacing the needle with a retractable pencil lead.”

Although much of the film is set inside David’s cabin, Aspinwall says Banishment isn’t really a one-location film due to all the exterior work. “We use the natural environment, the fog and the thunder, to make something very engaged with the world. The film has a documentary heart to it.” Accordingly, while the filmmakers cite lo-fi sci-fi inspirations like Paranormal Activity and Primer, they also reference Trey Shultz’s cabin-in-the-woods thriller It Comes at Night as well as Margaret Atwood’s dystopian novel, Year of the Flood. Aspinwall also cites Gustav Möller’s police-dispatcher drama, The Guilty. “It’s amazing what they were able to do in a feature film where you really only see one character. It was phenomenal and captivating, a film that’s ultra-minimalist in terms of cast and location. The tone isn’t similar to [Banishment], but it was a real inspiration.”

As Banishment raises its post funds, the team is watching other, larger productions start shooting under routines and protocols far more detailed than their own simple safety strategies. “We’ve been looking at the “Safe Way Forward” guidelines, and they’re very good,” says Byers. “They’re very science-based and there’s also a recognition of the cultural optics around, for example, taking away testing supplies for entertainment at a time when there are real shortages for medical needs. But there’s still an environmental challenge, which is that cases are very high in Hollywood. There’s an emphasis in these plans of zoning on set, but with people still going home at night, that’s hard to be foolproof. We’re hoping that the challenges of making new content right now might lead to windows of opportunity for small productions like ours that are able to take the ‘bubble and quarantine’ approach. And that a well-crafted, exciting story made for $5,000 might have a place.”