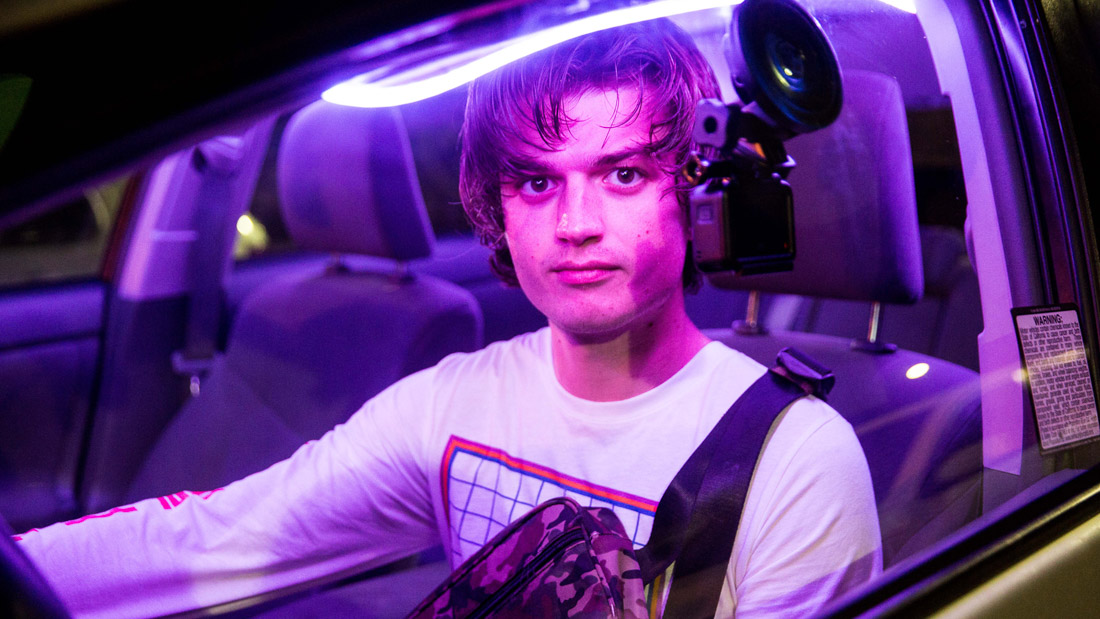 Eugene Kotylarenko has carved out a niche of vomiting up hyper-contemporary satires, up-to-the-minute and on-the-nose in their damning send-ups. His latest is Spree, a gory thriller told through livestream feed about Kurt, a rideshare driver and wannabe influencer who broadcasts a twisted murder rampage. (The film is available for rental now on digital platforms.) After producing content in obscurity for so many years, he kills his passengers in a desperate attempt to achieve viral fame.

For good reasons, Spree has garnered comparisons to Taxi Driver and To Die For, but the LA backdrop made me think first and foremost of Falling Down, the 1993 film starring Michael Douglas, about a laid-off, divorced professional who first snaps stuck in freeway traffic. Both films’ protagonists are white males whose frustrations stem from feeling undervalued, their textbook toxic masculinity growing out of life not meeting their expectations, the reality they feel entitled to not matching up with the one they’re living in. Both characters also are confronted with out-and-proud white supremacists, who they murder for different reasons. Neither is on board with what these Nazis are saying even if, as viewers, we can deduce each one’s killing spree is in fact a product of their entitled position in white supremacist society.

Steve Kato, writing about Falling Down in Artforum (prompted by a 2019 video art piece by Oliver Payne which references the film), argued that “the movie seemed to aspire to satire but could never pull itself free of the sinkhole of politically-incorrect entertainment barked out of Hollywood writing rooms in the 1990s.” Especially watching two decades later, it’s cringe. Spree is similarly a product of its times, however, in its political correctness. The film’s only redeeming character, serial killer Kurt’s foil, is an Instagram-famous stand-up comic, Jessie Adams played by Sasheer Zamata, a Black woman who becomes the vehicle for the film’s anti-influencer message, smashing her phone on stage, and who (spoiler alert) later kills Kurt in self-defense, becoming the film’s hero. On one level, it works — especially thanks to Zamata’s pitch-perfect performance — the movie’s id-pol dynamics feel believable and make the turn of events easy to cheer on. In another way, it feels too uncomplicated, and I’m left wondering how it might be received in another 20 years.

Perhaps the most obvious way that Spree is of its times though is in how the story is told. Each scene is narrated through diegetic GoPros and iPhones. There’s a constant stream of comments suggesting how many (or how few) viewers are watching along at home, gawkers complicit in the violence even if they aren’t sure at first if it’s “fake news” or not. This constant meta-commentary is how many people today consume a majority of their video content, especially those who tune into gamers’ channels on Twitch and YouTube. And it’s the first representation of this I’ve seen in cinema. It’s maybe worth mentioning that Spree was co-written by Gene McHugh, the author of Post-Internet Art (2010), who helped define post-Internet as this era when the web became ubiquitous, infiltrating every aspect of life for nearly everyone, not just a specialized realm for the technologically-minded. Since his first feature 0s and 1s (2011), co-writer and director Kotylarenko has been invested in representing how we live today, this hybrid state of online and IRL. Even if Spree comes across superficial at times, it’s this pursuit of depicting an honest hyper-contemporary experience that makes Kotylarenko’s work always feel worthwhile.