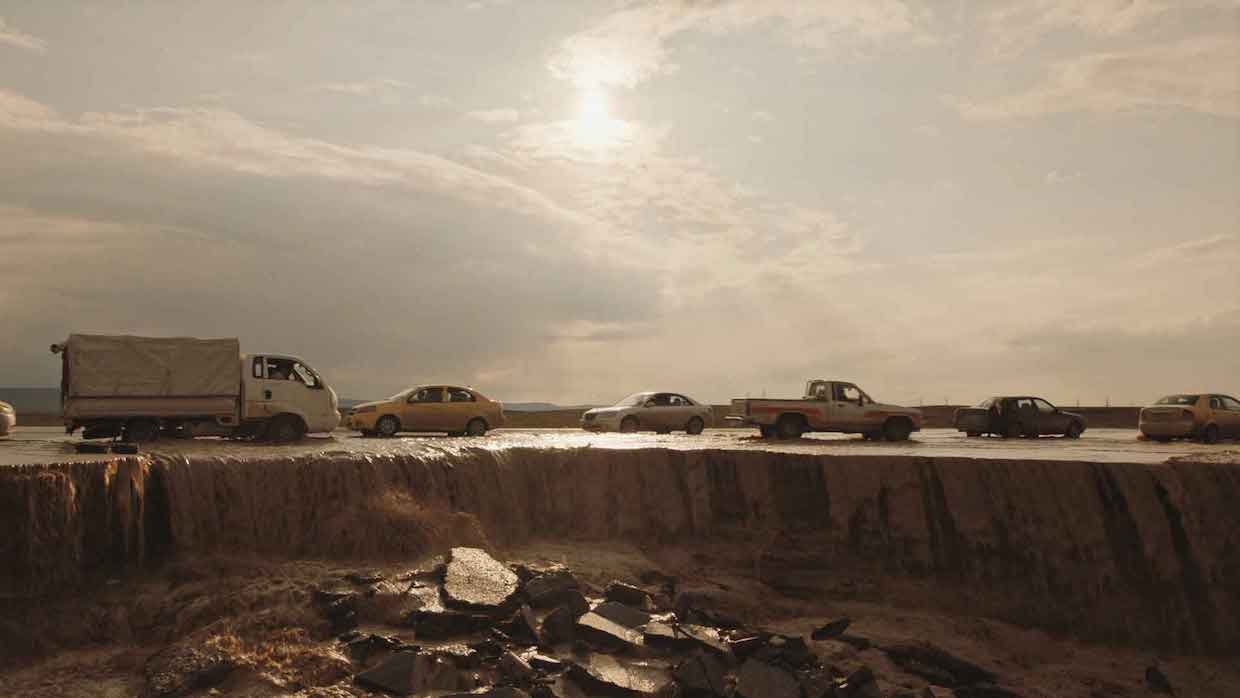 Seven years after Sacro GRA became the first nonfiction feature to win the Golden Lion, Gianfranco Rosi returned to Venice with Notturno. The opening titles succinctly provide context—three years of footage captured adjacent to ISIS-related warfare in Iraq, Kurdistan, Syria and Lebanon—while the first shot immediately re-establishes Rosi’s total ability to sculpt reality: groups of soldiers jogging in laps, separate squads with just enough time between one brigade passing and the next that it’s a visual and sonic surprise every time, the whole unignorably and beautifully color corrected. The shot holds as multiple divisions jog past the camera, their bodies outlining the borders of the square they’re exercising around.

Notturno never quite enters the realm of active combat, but flames illuminate night skies and guns chatter in the ambient mix even when unseen. Nearly every image is color corrected with painterly intensity. A man in camouflage setting a small rowboat in motion is a study in verdant green and dried-out brown wild grass corresponding exactly to his clothing. Later, the boat sailing into a blood-red night sky looks like one of Kwaidan’s painted backdrops. There’s an image straight out of The Turin Horse but real and in color, a distant long shot fof a refugee camp family pushing a wheelbarrow against howling wind. There is, of course, a potentially obvious problem in these spectacular images: the depoliticized or downright exploitative aestheticization of warfare and tragedy. If there was a real bone to pick with Notturno, it might be an utter lack of geopolitical context: the structure increasingly gravitates towards reckoning with ISIS atrocities, both as processed through drawings made by war-survivor children in therapy and in a climactic sequence of a woman listening to voicemails from her kidnapped, now-presumably dead daughter. The big absence is American foreign policy and what it’s wrought, but the US is never named. Nonetheless, I’m skeptical of the idea that the real viewership from this movie needs a reminder on this front. I’ve never questioned the sincerity of Rosi’s intent, nor his purpose in honing these images—they honor atrocious experience rather than appropriating it for questionable ends. Discussing Fire at Sea in 2016, with its unshakable, impeccably framed images of a boat’s bottom deck full of dead migrants, Rosi said that when he got down there, “The first thing I did was throw up because of the smell and the lack of air and the smell of feces, pee, vomit, all kind of human bodies. To frame that is horrible, you know, to expose, to think about the frame and light.” Ramshackle images aren’t inherently a badge of ethical honor and Oregon was lit orange in actuality earlier this week—nothing about Rosi’s approach strikes me as gruesome or inappropriate, and the results are as striking as ever.

Accepting the special jury prize for Dear Comrades!, the now-83-year-old Andrei Konchalovsky thanked the jury, rather puzzlingly, for their “bravery” in awarding his latest work: is this supposed to be a politically dangerous film? Unlike his brother, the rabidly nationalistic Nikita Mikhalkov, Konchalovsky has always been a little cagy about his politics (a 2014 Guardian profile notes that “he stresses his European-ness” rather than his Russianness). Comrades! recreates the Novocherkassk massacre, a 1962 incident in which striking Russian factory workers were shot, 26 fatally, by Soviet troops while protesting, an event concealed by authorities until 1992. The emphasis on bureaucratic corruption and murder as a secret tool of the state could be fraught with obvious resonances for the political moment—Konchalovsky has refused to confirm or deny any such intentions, which is probably wise. Instead, he’s emphasized on the formalist side of his project: to recreate Russia in 1962 in a manner aligned with the movies of the time. That means 1.33 black and white, which does indeed mostly look like a contemporaneous Soviet product. (The cameras are a little too small and occasionally disrupt the illusion when a door slam or similar shock makes the camera minutely shake in response).

I enjoyed Comrades for a while, especially the very specific period recreation—its natural companion piece is Alexei Guerman Jr.’s Dovlatov, which does the same for 1971 Leningrad. As this exhaustive piece on the incident notes, “everyone was doing what they thought was right, based on what they’d learned from Soviet propaganda films about labor strikes”— Konchalovsky leans into that irony, sometimes producing framings of the protesters not that far from Eisenstein’s Strike! The crudely allegorical narrative is grounded in the experience of a family neatly divided into three historical epochs—a hardline Stalinist mother; her Khruschev-trusting, reform-minded daughter and the mother’s anti-USSR father, who stews over massacres from the early ’20s—ultimately all leveled and united by different levels of disbelief in the Soviet project. Konchalovsky overeggs the massacre itself, filming part of it from inside a barbershop where the radio’s been left on: terrified people run and are bloodily felled by gunfire outside, while the soundtrack offers up a painfully anodyne bit of state-approved pop about happy children in the Soviet state. The irony is beyond blunt, the film increasingly distended, its impressive reconstruction not leading anywhere particularly beyond “the early ’60s were not a great time in USSR history.”

Old-school in a different way, Hilal Baydarov’s In Between Dying is a compact 85 minutes of arthouse cinema with an impressive group of names attached: Cristian Mungiu as consultant, Carlos Reygadas as co-producer, L’Ouverture Films as one of the production companies. The resulting product is what you’d expect in that vein plus some other influences: Kiarostami and Dumont (long moped journeys over winding Azerbaijani roads), Baydarov’s former teacher Béla Tarr (elegant tracking shots of people walking through remote landscapes), Tarkovsky (moody horses staring right at the camera in fields of grass). In between copious allegorical occurrences, there are interpolated sequences of a man and woman, talking in opaque alternative voiceover while they stare at the camera. A dark joke structures the first part of the narrative: no matter where often blank-faced protagonist Davud (Orkhan Iskandarli) goes, despite the best of intentions he always seems to end up killing somebody. A group of young men pursue him in a car, acting on behalf of a criminal cartel of some sort: they’re supposed to kill Davud but come to realize that he’s a pure-hearted soul trailed by violence, whose murders are all for the moral best. This structure also requires the constant endangerment or potential brutalization of women—Davud has to kill to protect, a fairly regressive way of structuring narrative. But even if In Between Dying is throwback apprentice filmmaking, I do tend of enjoy this kind of out-of-fashion exercise, and this is the 33-year-old Baydarov’s seventh feature in just three years; I haven’t seen his earlier work, but at this rate he may well work through his influences to an original place sooner rather than later.