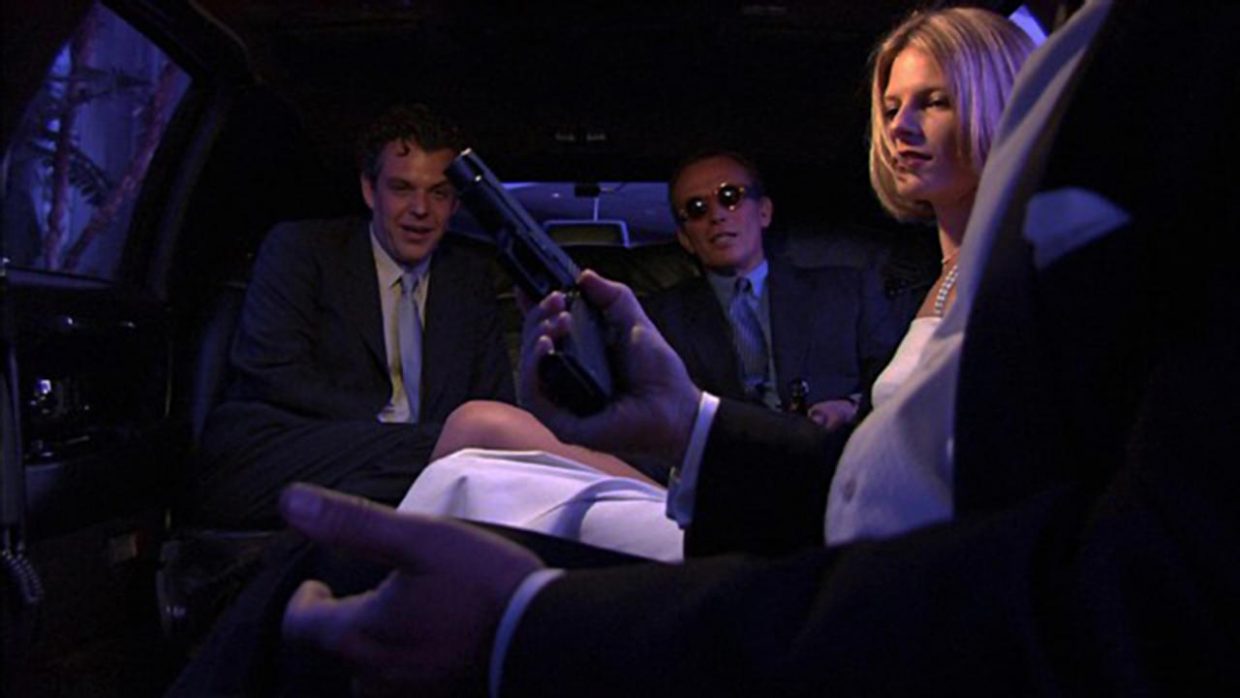 When director Kinji Fukasaku adapted the yakuza novel Graveyard of Honor for the screen in 1975, he was coming off of an extraordinary streak of Japanese gangster films that began with Street Mobster in 1972 and ended with New Battles Without Honor and Humanity in 1974. In between were six other yakuza pictures that transformed the genre in the same way that Francis Coppola reinvented the American gangster movie with the Godfather films. Like Coppola, Fukasaku was intent on deepening and critiquing the conventions he was working with, and in placing his stories at an intersection between myth and socioeconomic commentary; Graveyard of Honor was in many ways the culmination of this project, a crime tale set against the backdrop of post-WWII Japan in which the lead character’s turbulent journey from violent triumph to paralyzing drug addiction reflects the anxieties of a country trying to rebuild amidst the American occupation. In 2002 Takashi Miike directed a new version of Graveyard of Honor with a significant change in setting. This time around protagonist Rikio Ishikawa’s story is set primarily in the 1990s, the “lost decade” when the Japanese economy was in freefall. As Miike biographer Tom Mes points out in his excellent audio commentary for the new Arrow Blu-ray boxed set that includes both versions of Graveyard, Miike’s Ishikawa reflects his era just as the hero of Fukasaku’s version reflected his; his excesses in the first half of the film are indicative of his culture’s excesses during the economic bubble, and when that bubble collapses he moves from excess to desperation. In addition to Mes’ narration, Arrow’s Graveyard of Honor Blu-ray set includes an equally fine commentary on the Fukusaku version by Mark Schilling and numerous making-of documentaries, along with an outstanding visual essay on Miike’s work by author and critic Kat Ellinger. Both films are proof positive of the absurdity of the notion that movies need to have “likable” characters; each director presents Rikio Ishikawa as an unredeemable sociopath from beginning to end, and the insights that emerge are far more thought-provoking and rewarding that what one could ever get from a more conventionally “relatable” hero.

Another new Arrow release, ivansxtc., is one that I’ve been longing for for 20 years. The lacerating show business drama about a cancer-ridden agent (Danny Huston) in a sex and cocaine-fueled free fall was shot on a Sony HDW-700A HDCAM at a frame rate of 60i and then projected at 24 frames when it was theatrically released in 2002; the film never really got the distribution it deserved, partly due to technical complications stemming from the shooting format and partly due to the industry’s uneasiness with director Bernard Rose’s bleak take on Hollywood. Yet to categorize ivansxtc. as a Player-esque Hollywood takedown is far too limiting; adapting the same Tolstoy novella that served as the basis for Akira Kurosawa’s Ikiru, Rose and co-writer Lisa Enos use their Los Angeles milieu as a vehicle through which to explore harrowing questions about mortality that ultimately give way to a spiritually transcendent climax – this is both one of the scariest and one of the most comforting films about death I’ve ever seen. It’s also a sharp and very funny time capsule of Hollywood at the turn of the century that’s chock full of great performances, many by non-professional actors playing variations on themselves. The film has barely been available for decades, but Arrow’s Blu-ray was worth the wait: in addition to three different versions of the film (the theatrical release in both 24p and 60i and an extended producer’s cut recently assembled by Enos), the disc contains multiple recent and archival interviews and a great audio commentary by Enos and filmmaker Richard Wolstencroft. My personal favorite extra: a 2018 American Cinematheque Q&A moderated by screenwriter Larry Karaszewski, who does a great job of eliciting hilarious anecdotes from Rose, Huston, Enos, Peter Weller (who is great as an obnoxious movie star in the picture), and Adam Krentzman – Rose’s agent at the time who gives one of the best performances in the movie as an agent trying to do damage control following his colleague’s implosion.

My final recommendations this week are two Westerns, one classic and one brand new. Director Henry King’s 1950 The Gunfighter is a contemplative rumination on violence and regret with a central character – Gregory Peck’s Jimmy Ringo – who is one of the American cinema’s all-time great antiheroes. The movie has many pleasures, but one of its most vital uses for independent filmmakers is as a case study in how to build drama and suspense with finite resources; although it’s a studio movie, most of The Gunfighter takes place on one set in a time frame of just a couple hours. The filmmaking lessons go beyond those of using limited space and time, however – there’s also The Gunfighter’s superb editing by frequent King collaborator Barbara McLean, who provides one of the greatest (and most easily imitated) cuts in cinema history in a scene where Ringo displays his gunfighting prowess without the camera ever showing the moment in which he pulls his pistol from its holster. That cut and many of King and McLean’s other innovations are expertly dissected on the supplementary features of Criterion’s new Gunfighter Blu-ray, a must for filmmakers and Western enthusiasts. The disc includes an interview with filmmaker and archivist Gina Telaroli about King’s career and approach to directing, a video essay by film historian J.E. Smyth on McLean’s work, and audio interviews with King and McLean themselves. Aaron Koontz’s kinetic 2020 Western The Pale Door, which is out this week on DVD and Blu-ray from RLJE, is about as far as you can get from the reflective, subdued tone of The Gunfighter; although it begins as a riff on Delmer Daves oaters like Jubal and 3:10 to Yuma, it swiftly takes a left turn into supernatural horror territory when its outlaws find themselves trapped by a coven of centuries-old witches. Koontz switches between genres with deft formal control, delivering the jolts of horror and the moral inquiry of the Western with equal impact and effectiveness. He also assembles a first-rate ensemble – the compelling performances by Bill Sage, Zachary Knighton, and Melora Walters, among others, alone make The Pale Door worth a look.