“We Wanted to Be as Close to Jackson as We Possibly Could”: DP Adolpho Veloso on Jockey 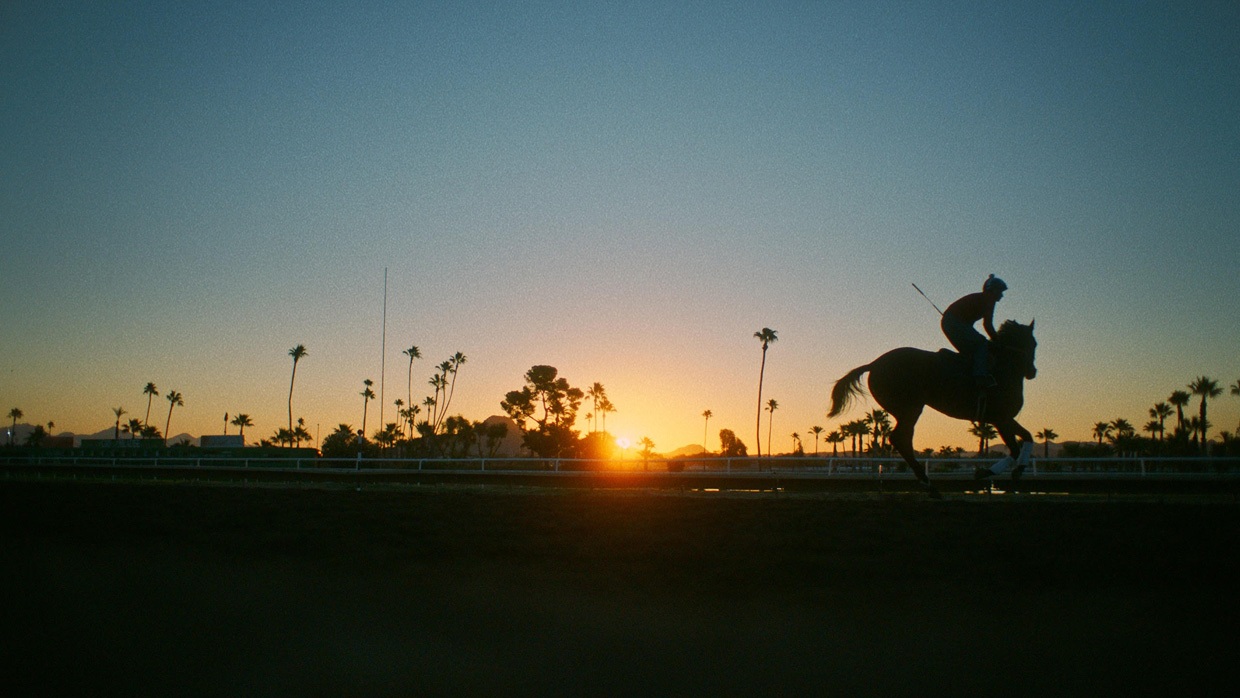 Clint Bentley’s Jockey is a naturalistic look at horse racing, a sport that some might say is in an extended twilight period. The film stars Clifton Collins Jr. as Jackson, an experienced jockey who may be forced to retire as his health begins deteriorating. His life turns upside down when a young jockey (Moisés Arias) arrives to the scene claiming to be Jackson’s son. DP Adolpho Veloso explains how they shot the sport in a respectful but honest way and the benefit of shooting in the colorful landscape of Arizona.

Veloso: Honestly, I don’t know, but I feel very lucky they chose me.

Veloso: Jockey is about a man struggling to accept that his career is coming to an end, and my main goal was to support this feeling. When I first went to the horse track, I felt the place itself had the same struggle; inhabited by a sport that lived its golden age already, but keeps fighting to survive. It became clear to me that we should shoot it as naturalistically as possible and really embrace the particularities of the track, to transform it into a character that mimics Jackson.

Veloso: Clint, the director, really wanted to make all the scripted scenes blend with all the improvisations, so you couldn’t tell the difference between them and the audience could really become immersed in the characters’ feelings. We wanted to be as close to Jackson as we possibly could: you see what he sees, you hear what he hears.

Veloso: I think the main influence on this one was the horse track itself. To be there during prep, hearing all those real jockeys stories, seeing their pictures and videos, brought us so much inspiration. It felt that was mainly what we should get attached to.

Veloso: The horses. We didn’t really have the money or the structure to shoot the actors riding, so we had to adapt and think a lot about how to shoot those races. Our decision to make a film from ones character’s point of view really helped with that.

Veloso: We used the Arri ALEXA Mini, a set of Zeiss superspeed lenses and a Angenieux Zoom for few specific scenes. I believe Arri makes the best digital cameras by far, so I’ve been using their cameras for the past few years. It’s just the perfect tool if you go for digital—it gave me so much flexibility, and I was able to shoot with very low light keeping a great texture and amazing color tones. The camera is light and easy to operate. Same with the lenses, they are super small and light while being fast.

Veloso: We had such a small crew that there was no way to go big and interfere much, which is basically the way I mostly like to work anyway, so we tried to play a lot with practical lighting and just had a couple sky panels and asteras to help. It was more about turning off lights, blocking windows, and increasing contrast, then adding lights. For exterior stuff we went a lot for sunsets, that besides having wonderful colors in Arizona, also felt like the right choice to portray a character’s career fading away.

Veloso: I think the hardest one was the final scene. We had to show him riding without really being able to put him on a race horse, combined with the final shot itself. That had so many factors that we had to make work at the same time, so we just decided to be as close as possible to the character and feel everything around him through his eyes and emotions. We were lucky Clifton delivered it so well that you don’t really need anything else. We had him on the back of a pickup truck mounted on a fake horse and the producer throwing mud at his face.

Veloso: The grading was expertly done by Sergio Pasqualino Jr., a long time collaborator who finds texture better than anyone I’ve ever seen. We tried to be as faithful as possible to the real colors we had on set, both for those beautiful sunsets in Arizona and for all those light fixtures we had on locations. I think the only thing we did that deviates a lot from what we had there was trying to make all those jockey suits blend with the rest of the film.

Lighting: two sky panels and a set of astera titans