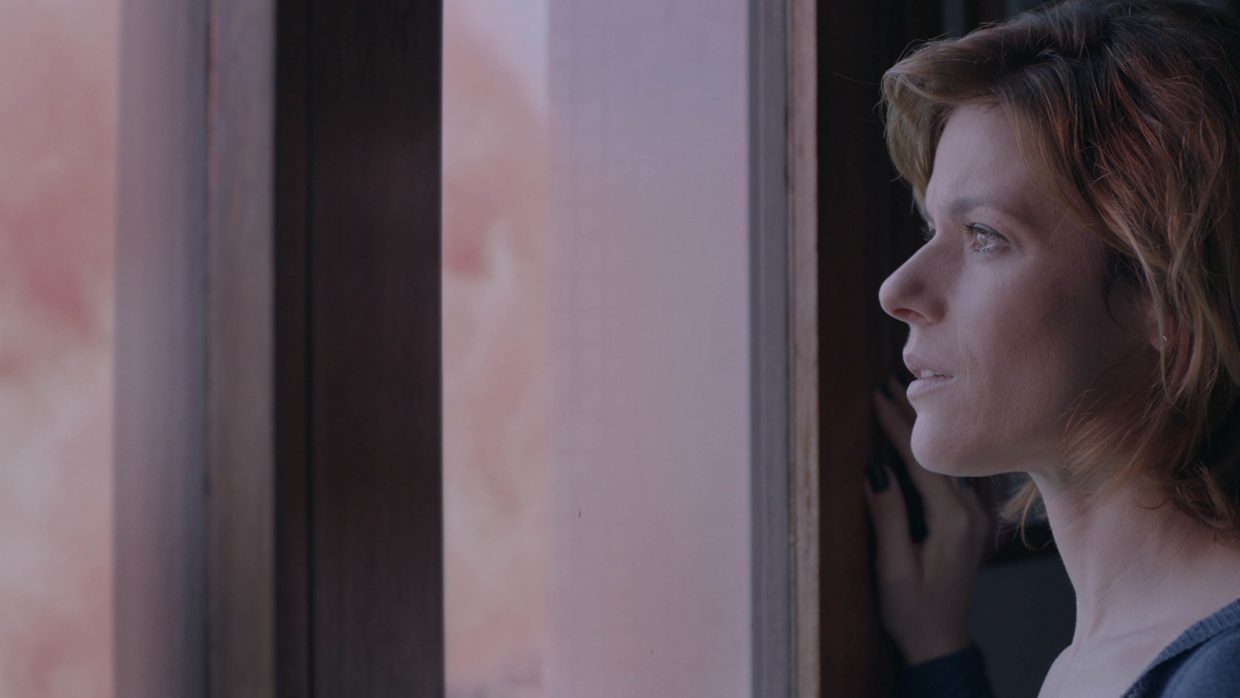 Something about sitting alone in my living room in the Florida Panhandle, staring at a 55-inch television screen, watching actors playing people alone in their homes staring at screens, while outside an invisible virus continued to wreak havoc on a world radically and irreversibly changed from only a year ago, really defined a lot of my experience with this week’s largely virtual Sundance Film Festival. Of course, festivals worldwide have made the pivot to online presentation, and they’re getting better and better at it. Meanwhile, it’s become almost habitual to describe a film as uncanny or prescient in the way it somehow anticipated our insular, dystopian moment. The pandemic is the narrative.

The Pink Cloud, written and directed by Iuli Gerbase, qualifies most explicitly. The Brazilian film was shot in 2019 and lends – per its title – some fetching art direction to a meteorological phenomenon akin to Don DeLillo’s “airborne toxic event” in his novel White Noise. Despite its puffy, pastel allure as it drifts above the cityscape, the mysterious cloud kills anyone that it touches, mandating a universal quarantine until further notice. Thus, a one-night stand between the film’s primary characters – Giovana (Renata de Lélis) and Yago (Eduardo Mendonça) – becomes something else entirely when their casual encounter extends potentially to a lifetime in quarantine. Strangers more than lovers, their personal magnetism proves an insufficient buffer for deal-breaking personality quirks (she’s restless, he’s mellow; they argue a lot) as they tentatively navigate various stages of intimacy, co-existence and avoidance, any sort of natural progression thwarted by their compulsory mutual confinement. Although, no one could argue for a more appealing lockdown zone than website designer Giovana’s spiffy two-level apartment (which, of course, offers a splendid balcony view of the cloud), or an existence seemingly free from financial worries. (Food and other necessities are delivered via an airtight bubble mechanism). Despite relationship tensions, Yago persists in his wish for a child, and so inevitably the couple welcomes a son, for whom the sequestered reality is all he’s ever known. Gerbase’s clever script maximizes incidental grievances into reflections of her characters’ personal philosophies while also making comic fodder of their self-possessed posturing, amid make-ups, break-ups, mental and emotional unwindings and detours into VR addiction, Internet-assisted sex and balcony-to-balcony exhibitionism. There’s a sense of absurdity and class-driven social commentary that feels vaguely Bunuelian in that bourgeoisie-in-limbo way. It’s that unsettling mix of the surreal, the ridiculous and the melancholy, as when Giovana tracks her younger sister’s development from childhood into adolescence entirely via laptop screen – ecstatic over the possibility of sharing the younger sibling’s first legal drink together – or the couple’s son, now old enough to start making sense of the world, innocently expresses his love for the lethal cloud that has erased the childhood he’s never known.

The film’s ambiguous ending feels hopeful, at least, an assertion of life against death, or perhaps only a desperate last gasp, if elegantly inhaled.

The dramatic push-pull of romantic partnerships and their lingering volumes of baggage might alone be enough to animate a science-fictional thriller without everything else Ben Wheatley throws at us during In the Earth, but then what fun would that be? The film conflates creepy old-fashioned folk-horror with some rather confounding rogue forestry and a mind-bending and often assaultive electronic score by Clint Mansell to arrive at a Stargate-level psychedelic climax of spasming what-the-fuckness. The deserved winner of any special jury prize for strobiest strobing effects, it complements Wheatley’s 2013 A Field in England, with more magic mushrooms and wounded wanderings through haunted woods. In a nutshell, a scientist Martin (Joel Fry) embarks on a two-day hike in the English hinterlands to find a colleague who has gone missing while engaged in a long term research project. He’s joined by Alma (Ellora Torchia), a park ranger whose inherent mastery of the terrain and confident survival skills leave him the semi-bumbling city dweller at a disadvantage – a nice bit of tension that boosts both comic relief and sexual chemistry. Then something bad happens. Then something worse. And the pair are now captives of an apparent serial killer/madman  Zach (Reece Shearsmith), obsessed with offering human sacrifices to a mythical woodland spirit/god/demon. As it happens, he’s the estranged husband of the missing researcher, who turns out not be to missing at all, and also turns out to be Martin’s ex, Olivia (Hayley Squires), who’s engaged in some increasingly unorthodox experiments with the flora that involve intense strobes and electronic sound bursts – basically, a DJ for raves with the forest thing, an entity Wheatley invents with a Wicker Man-esque flourish of eccentric babble and pagan etchings.

As the story steadily devolves into madness, the performances supply a fraying tether. Fry and Torchia are great together, on what really amounts to a first date in hell, and the tense sequences of impending mortal agony and peril expertly inflict the proper degree of nauseating anxiety. Conceived and produced amid the pandemic, In the Earth references the plague in multiple scenes, suggesting of course that even the most remote, depopulated places may offer no safe haven.

Themes of technology and isolation recurred throughout my festival viewing, whether in features like We’re All Going to the World’s Fair, Jane Schoenbrun’s emotionally powerful drama about a lonely teenage girl’s obsessive plunge into the online rabbit hole of a creepypasta roleplay game and her own sense of identity, or docs like A Glitch in the Matrix, Rodney Ascher’s exploration of the notion that we’re all living in a simulation. Given that, I only expected more of the same from Pacho Velez’s latest documentary, Searchers, in which New Yorkers of every age, walk of life and position on the gender spectrum open up about their experiences with online dating apps. What could be more sad and insular? Judging from the masks present in the film’s exteriors, at least some footage was shot during the pandemic, surely another barrier to a close encounter. Surprisingly, though, Velez’s exercise in soft anthropology is a joyous display of intrepid human desire. With cameos from the filmmaker, his mother and even Caveh Zahedi, the film has the freewheeling vibe of a decidedly homemade production, with the nuts and bolts of its process included, and a breezy tone accentuated by the abrupt pronouncements New Yorker residents are known for, whether they’re natives or transplants. So much transpires outside, in the streets and parks and along the riversides, that the subjects almost seem defiant (although generally not in a super-spreader way). For them, the “pink cloud” would be a new cocktail, and they’d greedily suck it down.