Dressing for the Extremes: Costume Designer Alexandra Byrne on Emma. 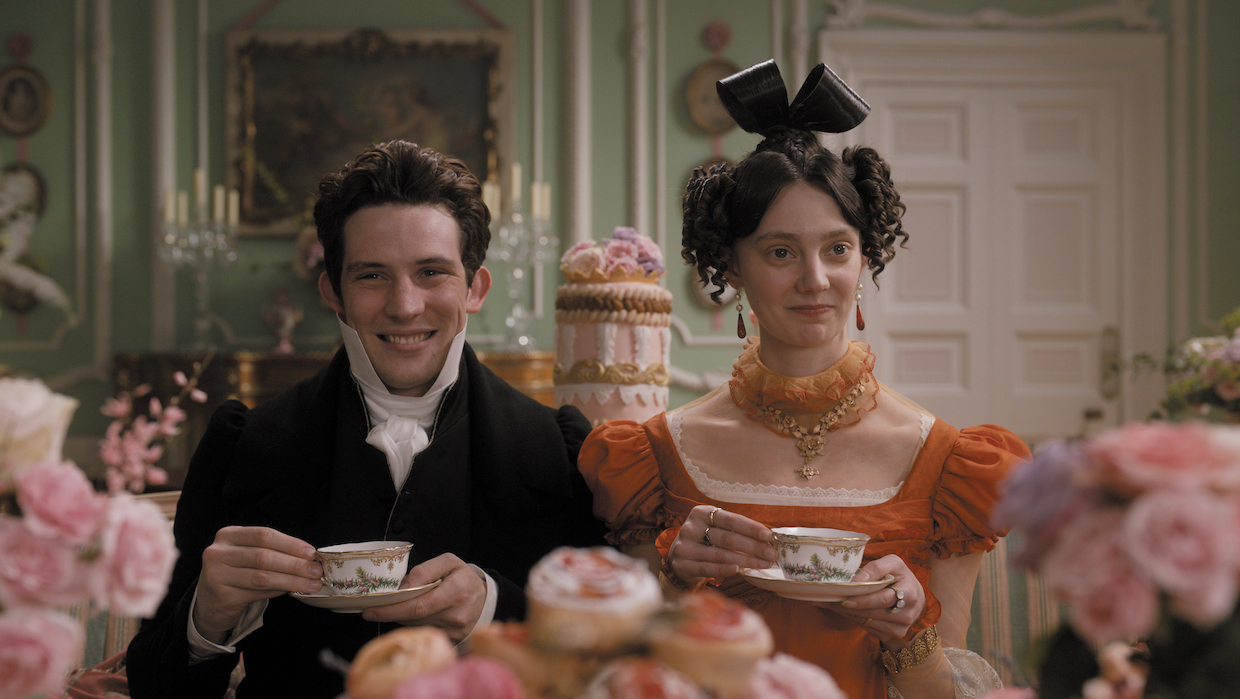 Josh O'Connor and in Emma.(Courtesy of Focus Features)

by Abbey Bender
in Interviews, Issues, Sound & Visionaries
on Feb 10, 2021

With their picturesque settings and unforgettable romances, Jane Austen adaptations have been cinematic staples for decades. The latest, Autumn de Wilde’s Emma, offers a colorful take on Austen’s 1815 tale of a young woman navigating relationships with the know-it-all confidence that goes with being, in Austen’s introductory description, “handsome, clever, and rich.” Much of the film’s distinctive sparkle comes from the costumes created by Oscar-winning designer Alexandra Byrne. Surprisingly, Byrne (one of whose first films was another Austen adaptation, 1995’s Persuasion) hadn’t read the novel before working on the film. “I really, really enjoyed it,” she says. “Sometimes, when you’ve read a novel before you don’t have that freshness to it. What I loved was the energy in the book.”

Whether working on a period film or a Marvel spectacle (with a filmography that includes Elizabeth: The Golden Age, The Phantom of the Opera, Guardians of the Galaxy and Doctor Strange, her résumé is split between these two seemingly disparate genres), Byrne always begins her creative process with the screenplay. The fact that the novel had been adapted multiple times didn’t faze her. After reading the script, she worked closely with de Wilde, who “was very clear about the visual story. She wanted the film to feel full-blown to the period and bring the humor out of the authenticity of the period.” de Wilde has had a long career as a photographer, and as Byrne says, “Having done so much fashion photography, Autumn adores clothes. That was the joy: When we first met, I knew exactly what she wanted me to do in terms of how far to take the clothes.” Period films often come weighted with expectations of stuffiness, and Byrne is quick to point out “a lot of directors are scared of bonnets and top hats, but Autumn absolutely loves them.”

The film follows a four-season chapter structure in which color palettes serve as a potent signifier. Byrne is well-equipped for such a world: “I trained as an architect, then moved into theater design. In England, as a stage designer, you do sets and costumes. Doing both, I really loved the power you have through clothes to tell a story.” Byrne was excited by the opportunity to bring her keen eye and understanding of place to the early 19th century, explaining, “It’s a very extreme period. It was the biggest change that had ever happened in women’s fashion, to go from big, heavy, brocade corseted court dresses to these sheer muslin dresses. Today, we think going from boot cut to skinny leg jeans is pretty grand. But that was enormous.”

To give Emma. its distinctive look, Byrne dove headfirst into researching the Regency era, visiting museums and studying illustrations as well as original pieces from the time. “I need to know a period inside out, so that I can understand and be in control of the choices I’m making,” she says. Byrne points out that the period of the film coincided with the beginning of fashion magazines, and as a wealthy young woman Emma would want to be at the center of such a “cosmopolitan” phenomenon. “When you have someone like Emma, who’s so indulgent and so privileged, you can really explore what the fashion sense of the time was. I felt that the way of showing her wealth and her status was that she had the right clothes for every occasion, for every season, for everything she does, whereas a lot of people around her have far fewer clothes,” Byrne says. While there may be a seemingly infinite array of empire waist dresses onscreen, Byrne explains, “By understanding the period, you realize that a muslin dress can be made to look like it’s six or seven different outfits because muslin is sheer, so you can use colored petticoats underneath. You can put different in-fills and different seams, different necks, different spencer jackets. It’s actually a lot of layers, and the buoyancy and layering allow you to make something different. The joy was unlike, say, the superhero films; you’re not making 10 action repeats. We have a couple of riding doubles, but otherwise, they were just all one-off costumes for the men and women.”

One of Emma’s most memorable outfits features a long yellow coat, complete with a matching feathered hat. Byrne calls that bold color choice “an instinctive decision.” Once Byrne’s gone deep on research, “it always surprises me how quickly I can move in decision-making.” This combination of intensive study and instinct is a consistent feature of her work. To create a pair of durable pants for Mr. Knightley, the male lead, Byrne even repurposed a technique of fusing leather and Lycra from one of her Marvel films. “You could effectively say he’s wearing part-super hero riding britches,” she says. “It’s easy to think that a costume designer sits at a desk and draws marvelous pictures, and that’s it. But a lot of what we do is problem solving, and that’s true of both superhero films and period films.”