“… Once a Person’s Voice is Captured, They are Expendable”: Director George C. Wolfe on the Musical Histories of Ma Rainey’s Black Bottom 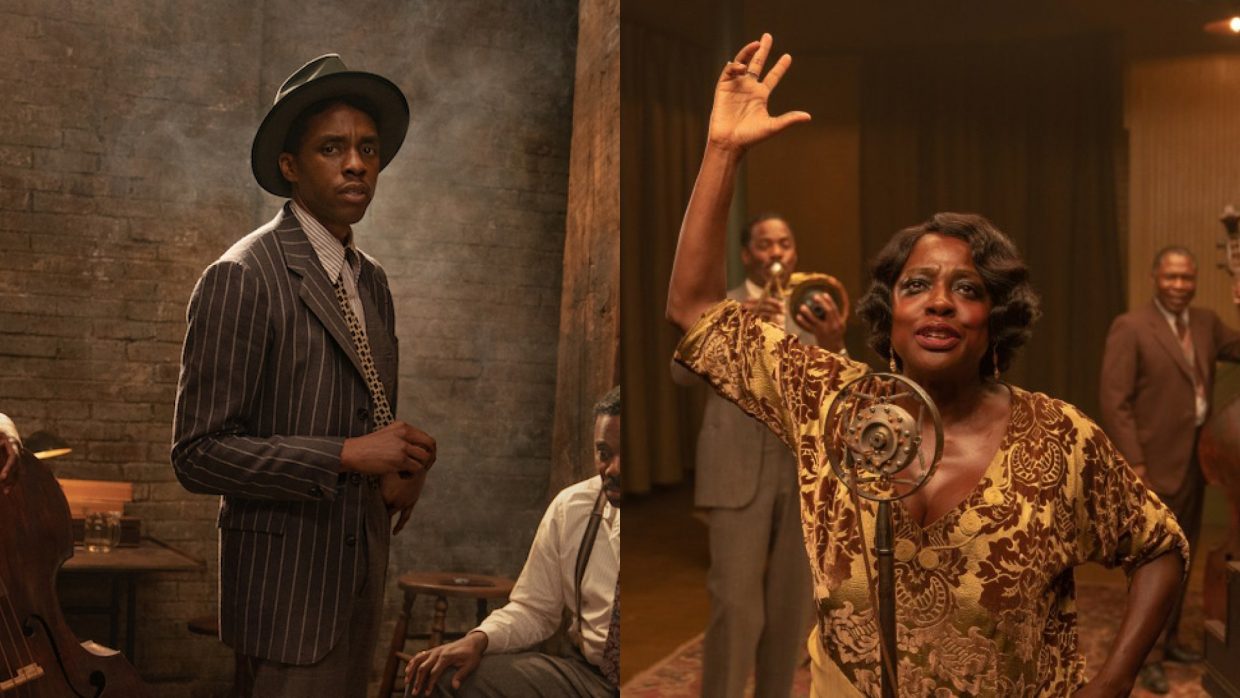 by Martin Johnson
in Directors, Filmmaking, Interviews
on Feb 23, 2021

Black music. White privilege. Chicago. 1927. What could possibly go wrong? Indeed, nearly everything, and it’s chronicled with artful intensity in August Wilson’s Ma Rainey’s Black Bottom, the second in a cycle of ten plays that compassionately detail the 20th-century experiences of African Americans. Ma Rainey’s was brought to the screen this season in a stellar production directed by George Wolfe that stars Viola Davis in the title role and, in his final role, Chadwick Boseman as the upstart young trumpeter and rake in her band.

Wolfe, a Tony Award-winning theater director and writer, is gradually building a formidable resume in cinema. In the past six plus years, he’s helmed You’re Not You and The Immortal Life of Henrietta Lacks (which he also wrote). In his latest, Wolfe has taken Wilson’s famously self-contained and potent work and framed the story, which is set at a contentious recording session on a sweltering summer day, to maximize the conflict brought about by white supremacy, patriarchy and musical stylistic progressions. His direction enables the extraordinary cast to shine and deepens the movie’s impact.

Each of the plays in Wilson’s cycle will be adapted in coming years with Denzel Washington as producer via an arrangement with the Wilson estate. Wolfe set the bar high for the films to follow. His vision brings the joy, pain, pathos and theft of this unique moment in African American history and makes it palpable and affecting.

Filmmaker: You’ve said that you needed to either be scared by a project or attracted to it in order to work on it. Which emotion held more sway in approaching Ma Rainey’s?

George Wolfe: (laughs) I don’t know! But, really I was drawn to it. Every three or four years, I find myself going back into the ’20s. It is an extraordinary time. That which was unjust in America was exposed, and that which was exhilarating about America was exposed. It was this explosion of freedom and discovery before the heavy weight of fascism that became the ’30s took force all over the planet. I think it was this amazing time [when] America began to evolve its own language. And, you know, that language was heavily informed by jazz and the blues, so I keep on going to the ’20s. It has almost become like a second home for me. Anytime I dig into one corner of it, i.e., Chicago, 1927, Ma Rainey, Mother of the Blues, it connects to some other place I’ve already lived.

Filmmaker:  You’ve often worked with musical themes, as in Jelly’s Last Jam and Bring in Da Noize Bring in Da Funk. Is it fair to assume you’re a big fan of music and the story it tells?

Wolfe: Yeah. I played trumpet badly for eight years, from the time I was third grade until I was a senior in high school. I was terrible at it, but doing it put something in my body. It put an understanding of the wisdom in it. What came out of my body was clueless when I was playing the trumpet. But as a result of playing it, it put something in my body that I’m so glad is there.

Filmmaker: Given your fascination with that era, was there anything that connected Jelly’s Last Jam to Ma Rainey?

Wolfe: No, not exactly; [Jelly Roll Morton] became a huge star in Chicago, and he had a much more complicated time in New York. It’s so interesting, Ma coming to Chicago. It’s why the prologue, the beginning of the film, shows us that she had this devoted following and that she was an entrepreneur. We could see that she had power in the South and coming to Chicago meant that she had to negotiate a relationship. She had a power in the South because she created her own system because the white system just completely disregarded her.

In Chicago, she is going to play the music, and she’s going to play in those venues. She was going to have to come into contact with white power structures. That was fascinating to me, that someone who had her own sense of self worth was coming into contact with her manager and the owner of the studio. That was a perpetual power struggle, whereas Jelly Roll Morton or Louis Armstrong were able to have these really interesting careers in jazz. The film is set in 1927, and she didn’t record anything after 1928. So we are in essence, witnessing the demise, the fading out. That’s really fascinating to me, where your vibrancy is being replaced by something else. The presence of Jelly Roll Morton, or, in this play, Levee, is announcing her demise.

Also, her sound is the voice of all these hundred thousand Black people who move to Chicago from 1900 to 1920 [the early phase of The Great Migration]. Her voice is harkening to what they know, but they’re going to leave there and go see Jelly Roll Morton the next night. That’s why visually in the film, you see the audience in the South, but not in the North. There’s already a disconnect between her and the audience, and that disconnect will keep going and going and going until nobody’s gonna be buying her records.

Filmmaker: How important was it for you to illustrate the element of race and racism in the music business, and how African American innovations were stolen, essentially, by —

George: — It’s intrinsic to the material. In the South, she’s in charge; in Chicago, she’s not in charge. She says, “They want to take my voice and put it in that machine.” It’s the mechanization: seeing these men working the factories and the steel mill, seeing those women at the sewing machine, the parade of them — they’re getting a wage that is higher than what they got in the South. But it’s at the expense of something else, it’s at the expense of the uniqueness of what they have to offer as human beings. Not to get into some sort of overt heavy-handed political statement of the Industrial Revolution, but it’s true. And it’s the idea that once a person’s voice is captured, they are expendable. Ma knows this, and she’s determined to fight it, but at the same time, she needs those records to ensure that her legacy is maintained. So, there is this doubled-edged dynamic.

One of the tragedies of the film is that Ma has information about how to deal with those white power structures that Levee does not have yet. And he has a sense of the new sound, which Ma does not have, and they can’t pass it on to each other. Jealousy and territorialism and Levee’s recklessness and cluelessness to go after his boss’s girlfriend get in the way of that happening.

Black artists have been exploited by the white music industry, but [Ma Rainey’s Black Bottom offered] the chance to fully embody that, in large part because of the glorious writing and also Chadwick’s brilliant performance. We fall in love with Levee and how clueless he is and how charming and smart and extraordinary he is. Therefore, when his music ends up stolen at the end, we feel it, as we’ve grown to love this human being, this artist. Everybody knows the dissertations of what has happened to Black artists. Everybody knows about Big Mama Thornton and “You Ain’t Nothing But a Hound Dog.” But the chance to fall in love with an artist, and to see his music literally stolen from him — we feel it. That was my ambition. We don’t just get it abstractly — we feel the violence.

Filmmaker: Indeed, one of the motives of the beboppers — Charlie Parker and Dizzy Gillespie and Thelonious Monk — was to create something that couldn’t be copied.

George Wolfe: Exactly, a creation that no one can readily duplicate. We did a screening in early January [2020], in Atlanta. At one point, when we see Levee in that scene with Sturdyvant, he thinks they have a little bit of a song, and Sturdyvant says, “Just let me take that off your hands.” The audience in unison screams out, ”No!” That was thrilling to me because it’s like, they knew what was the next moment was going to be.

Filmmaker: Style is certainly an emblem, a unique, a loud emblem in African American culture. How did you seek to portray that within the movie? There’s all this meaning, rightfully invested by Levee in his shoes.

George Wolfe: There’s a line in my play, The Colored Museum, “God created Black people and Black people created style.” You couldn’t control the laws that were that were made up about you, but you could control what was on your back. And you could make sure that it even if it wasn’t the most up-to-date style, you could control the fact that it was flawlessly clean and perfectly pressed. And when the young Black students were going in for the sit ins, they would make sure the they were dressed flawlessly. How you walk, how you present yourself in the world, is not just an expression of your personality, it’s an art. It’s a means of defiance. It’s a means of celebration, and it’s a means of of asserting your identity. It’s about not allowing somebody else to impose their identity of what you are.

Filmmaker: Was Levee a kind of Jelly Roll Morton in this schema?

Wolfe: Exactly, and you know, it’s a really interesting thing, bringing up Jelly Roll Morton. Morton was so invested in discrediting those people who were coming behind him, so that they didn’t honor him versus Duke Ellington. A lot of the people who were in Jimmy Lunceford’s band used to play with Jelly. Jimmy and his band were in Los Angeles at the time when Jelly Roll Morton died. And none of those band members went to his funeral.

Filmmaker: Will there be more Wilson film projects that you’ll direct?

Wolfe: We’ll see. I mean, [Denzel] would love me to do another one. And maybe somewhere down the line, you know… If I do [another] project, I want to completely go in a different direction just so I can keep throwing cold water on my head. To put myself in a situation of not knowing so that I could discover what I need to discover in the process.

Filmmaker: Is there anything you’d like to add about working with Viola and Chadwick?

Wolfe: I would just say that working on Ma Rainey was one of the blessed, addictive experiences because everybody — every single actor, every single person behind the scenes, the DP, costume production designer, everybody — was so invested in telling the story, in surrendering the extraneous parts of their existence so that they could be part of the language of the world; everybody was completely and totally caught up in that phenomenon. And so it was a really great experience because the director is, in some respects, a conductor, and every single person involved is in the orchestra. And they were gifted stunning artists, who were masters of the instruments that they own. It was just a thrilling, exhilarating experience because everybody not only was passionate but they were brilliant at what they do.