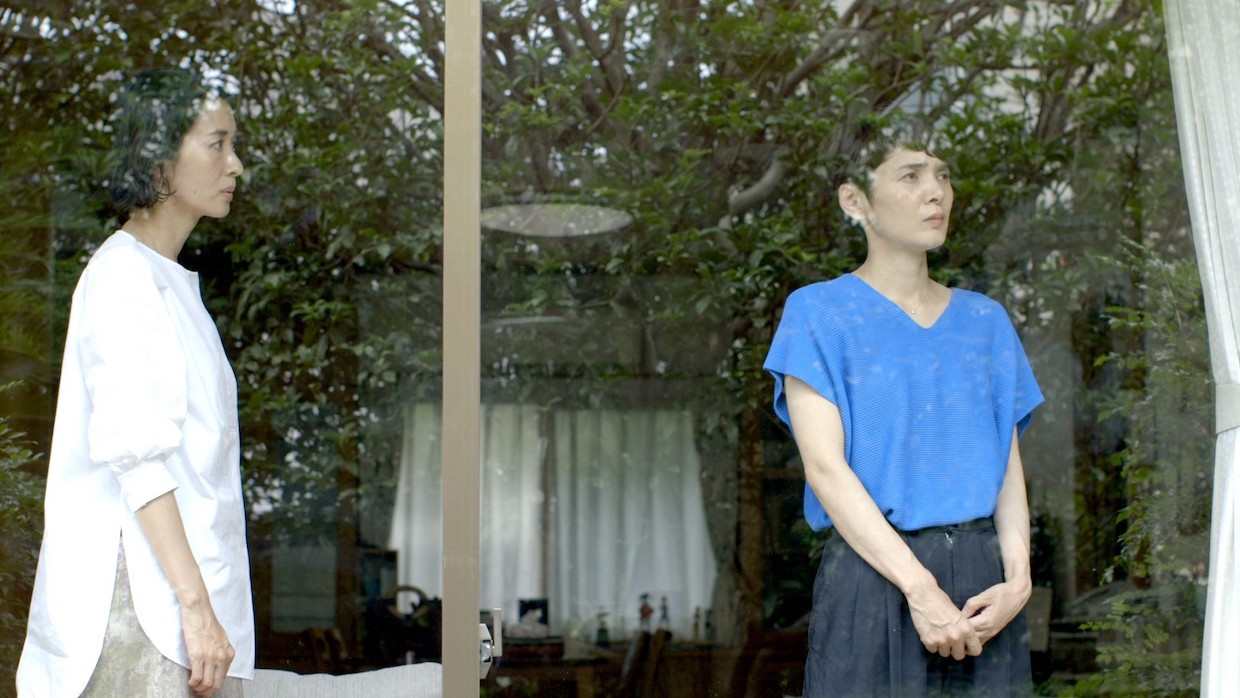 Fusako Urabe and Aoba Kawai in Wheel of Fortune and Fantasy

by Vadim Rizov
in Directors, Interviews, Screenwriters
on Mar 4, 2021

Even after two of his features were derailed by the pandemic, Japanese director Ryūsuke Hamaguchi had a busy 2020. After breaking out with his 2016 film Happy Hour, Hamaguchi returned in 2018 with what he described as his first “commercial film,” Asako I and II, as opposed to a smaller, independent production. Adapted from a Haruki Murakami short story, Drive My Car is Hamaguchi’s current “commercial” project, while the smaller-scale Berlinale 2021 premiere Wheel of Fortune and Fantasy is his smaller, independent film. (When not in production on these films, Hamaguchi, along with director Kōji Fukada and two of his Happy Hour producers, helped spearhead a crowdfunding campaign to help subsidize Japan’s mini-theaters, that country’s equivalent of the arthouse. Hamaguchi spoke about his role on that campaign during a panel hosted last summer by Japan Society.)

Best experienced with a minimum of advance knowledge about its moral twists and plot turns, Wheel of Fortune and Fantasy tells three stories, each clocking in at around 40 minutes—the first two shot prior to the pandemic, the third was shot during. (A scrolling title card at the top of this segment, establishing a post-Internet landscape and premise, brings the tone in line with current events without being literal-minded about it—no on-screen masks here.) Hamaguchi has made medium-length shorts before, such as Touching the Skin of Eeriness and Heaven is Still Far Away, but Wheel is greater than the sum of its individual stories, building an intricate system of echoes across three stories of frustrated relationships, each told in three or four long scenes, primarily in prolonged interior exchanges between two characters. As Hamaguchi discussed during our interview, both the structure and tone were directly inspired by Eric Rohmer’s 1995, three-part anthology film Rendez-vous in Paris. That direct influence is perceivable in both film’s first segments, which climax with an awkward cafe meetup in which two people are both interested in the same potential romantic partner. Hamaguchi reverses Rohmer’s triangle and the directions in which desire and power imbalance are distributed; if I have trouble perceiving an equally clear relationship between the second and third segments of both films, it’s worth noting that Wheel’s final scene generates as much euphoria, in its own distinct way, as e.g. The Green Ray. Over Zoom, I briefly spoke to Hamaguchi about his new feature.

Hamaguchi: I thought short stories were a form with a lot of possibilities I could develop. Of course, telling a long story is a mainstream production principle, but I wanted to put together three short stories on the theme of coincidence that told one story. I was inspired by Eric Rohmer’s Rendez-vous in Paris. The atmosphere, the structure of the stories and how they were combinedwere all by inspired by Rohmer. There is also something in common between these three, the theme of a woman looking for something. The first story is a kind of introduction—it’s very easy to understand the triangle relationship between these three characters. The second is based on the dark side of this world: both characters make mistakes, and for one of them life goes wrong. The third story is about the backside [of these situations], where a coincidence triggers the characters.

Filmmaker: You’d begun production on both this and Drive My Car before the pandemic. How did this affect finishing Wheel’s production?

Hamaguchi: Filming started on the first and second stories in the summer of 2019, before the production of Drive My Car. Then there was a break, obviously, because of the pandemic. The third filming started right after the state of emergency in Japan. Many things have changed: for example, film crews had to keep social distance when working and everybody had to wear a mask on set. But in terms of filmmaking, it didn’t really affect much. For each short story, we had a relatively long 10 days of rehearsals.

Filmmaker: Was the third story conceived prior to the state of emergency?

Hamaguchi: Everything was written in 2019, but obviously when shooting the third story I had to add some science-fiction elements to create the same kind of atmosphere.

Filmmaker: The beginning of the second episode touches upon power harassment, which also become an news story this summer in Japan when complaints were filed against the mini theater UPLINK.

Hamaguchi: There’s no relationship between the second story and the mini theaters, but I recognized there was an existing problem of power harassment even before the scandal in 2020. It’s not that I was particularly interested in sexual or power harassment, but when thinking about stories it was a natural development to include this theme, because these films respect a lot of aspects of everyday reality. So, naturally, the current situation of Japan is included in the film. I also realized when I was making Happy Hour that these problems will emerge when a woman is the main character, because in current Japanese society, when women are trying to be active or do something, there’s always something stopping them.

Filmmaker: How did you rehearse and block in the first two long scenes, first in the car and then in the office?

Hamaguchi: Rehearsals are very important in my filmmaking. Since the production of Happy Hour, what I consider the most important [part of the process] is to read out loud without emotion. They repeat the lines many times until they can say they can say them automatically. I then start directing easy movements—“You can move from here to there”—but don’t tell them exactly where to stop. It takes about three days to get to the point where all their dialogue and movements feel natural. That’s the same whether you’re in a taxi or in the office. Usually I don’t rehearse on location, but in a conference room. Rehearsing in the taxi wasn’t particularly difficult—every scene was difficult. The most difficult scene making this wasn’t a dramatic scene, but something like that scene in the taxi—a normal conversation of everyday life. But the actors were good and managed to do it.