“It Was Surreal Seeing Rehearsals with Actors Kissing While Wearing Face Shields and Masks:” DP Laura Gonçalves on Lensing Genera+ion 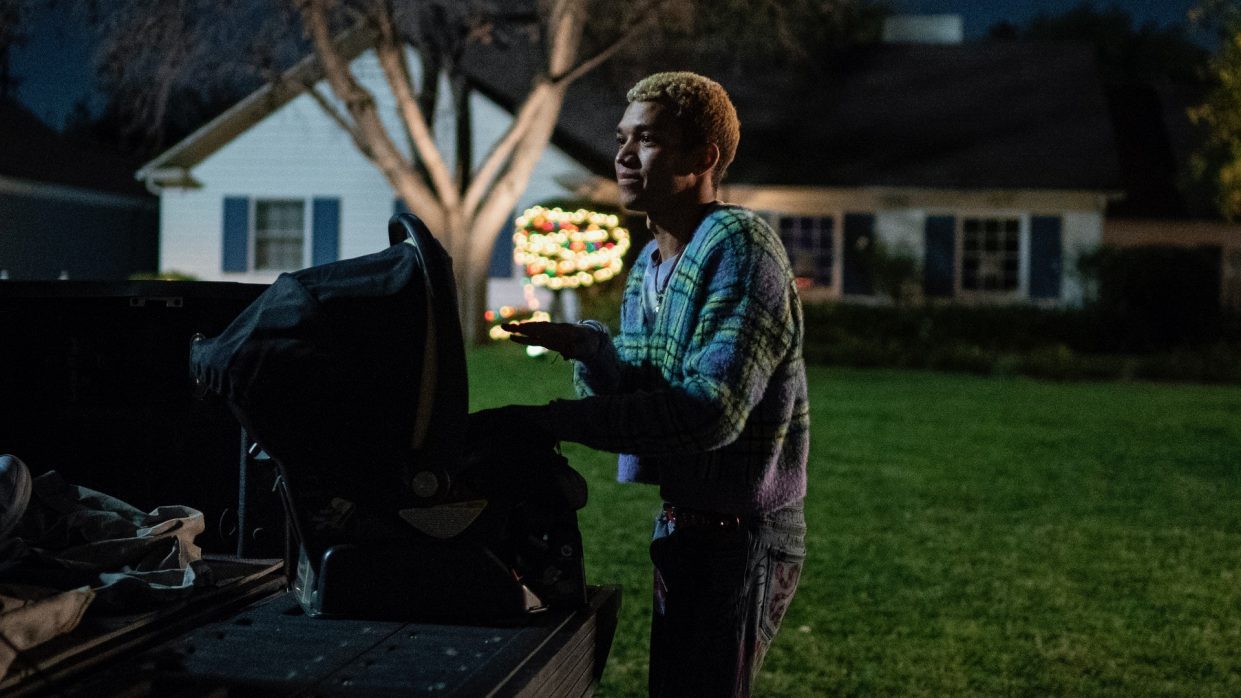 by Daniel Eagan
in Cinematographers, Interviews
on Apr 23, 2021

Now streaming on HBO Max, Genera+ion follows Orange County, California, high school students searching for their identities in a world of lockdowns, relentless social media, and clueless parents. The series was developed by Zelda Barnz and her father, Daniel Barnz, (a Filmmaker 2007 25 New Face). Executive producers include Daniel’s husband (and Zelda’s father) Ben Barnz and Lena Dunham. The first eight episodes began filming in September 2020. The second half of season one wrapped in early April.

Four cinematographers have worked on Genera+ion, including Sean Porter for the pilot, Yaron Orbach, Xavier Grobet, and on three episodes in season one and all of season two, Laura Gonçalves. She spoke with Filmmaker from Los Angeles. 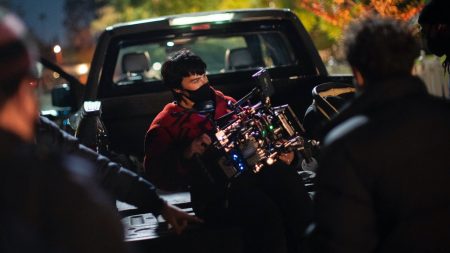 Filmmaker: When did you start on Genera+ion?

Gonçalves: I met Daniel Barnz in June last year. I loved what Daniel and Sean Porter did with the pilot. The aesthetic of the show was there, but Daniel wanted to refine the visual language. The show was written by his teenage daughter, and Daniel wanted to feel that authorship in every frame. We talked about that a lot during prep, how to avoid imposing judgment, how to keep it grounded in reality.

The series started with me and co-DP Xavier Grobet. We worked together with Jonah Markowitz, the production designer, on how we were going to light and what colors we would use. All the lighting in the show is designed so we could shoot 360 degrees. We incorporated a lot of practicals and set fixtures. We also tested paint colors and finishes.

Filmmaker: How would you describe the look of the show?

Gonçalves: It has an intimate naturalism. It’s very POV-driven, so the visual style is grounded in each individual character’s perspective. We are observing the world through their eyes. That’s where the story is taking place, which informed where the camera should be.

A lot of the episodes are written so that the POV passes from one character to another. You see the same things from different angles. We called it “the Rashomon style.” It was always a bit of a puzzle schedule-wise, because we would shoot some material multiple times.

The majority of the show is handheld, with a couple of exceptions. Megan [played by Martha Plimpton] is a very Type A, controlling personality, so her camerawork is a bit more composed. She’s always on a mission, so the camera follows her on a Steadicam or dolly, keeping her center-punched.

Chester [Justice Smith] lives in a dreamy, cinematic world he’s created for himself. He’s someone who has a soundtrack following him around, floating on air. We use more fluidity, symmetry and romance with his camera when we’re in his POV.

But for the most part the other characters are shot with handheld cameras with a ton of movement. When we’re in somebody’s point-of-view, their coverage will be clean, or the camera will be as close to them as possible, and we pan over to the person they’re talking to if we need coverage. We never shot objective coverage.

Most of the time we shot with two cameras, but not in the traditional TV style of constantly cross-shooting. We design a scene for one camera, and once we figure out our master, find a way to sneak in the second camera.

Filmmaker: How much time do you have for each episode?

Gonçalves: TV schedules are definitely tight, but with COVID we got a little more time per episode — six days per 30-minute episode where normally you get five. Also we’re working shorter days, ten-hour days. Or doing French hours, which is nice. I’d say 70 percent of our work is on location and 30 percent on stage. When we’re on stage, we’re pretty much pre-lit. On location we have a rigging crew that takes care of a lot of the heavy lifting. We don’t have much time once we are in it — maybe 20 minutes to light a scene, and then two to three hours to shoot it.

Filmmaker: What was your camera package?

Gonçalves: Because of our style it was important to have a very small camera that would give us freedom to do everything our characters were doing. These kids are rooftopping and constantly on their cellphones. We needed lots of mobility to stay kinetically connected to the characters.

We shot on the DXL-M, a smaller version of the DXL-2, Panavision’s large-format camera. Panavision was able to put its color science into a smaller Monstro body. Our lens package has K35s, a couple of Panaspeeds, and a 65mm Artistes we named Bob Ross. Also two Adaptive Optics that Dan Sasaki optimized for us for special POV moments where someone’s stoned or drunk, or gazing lovingly at someone else.

Filmmaker: That sounds like every episode. I’m wondering how comfortable you felt, both in terms of COVID protocols and also because there are so many intimate scenes.

Gonçalves: It was surreal seeing rehearsals with actors kissing while wearing face shields and masks. We had a great intimacy coordinator. The actors and everybody else felt comfortable before we started shooting. We would have a closed set with only a few of us at the monitors. It was very professional.

Filmmaker: On a more practical level, was it difficult to stage scenes with the new protocols?

Gonçalves: Everyone has masks, face shields and PPE on during the rehearsals, which definitely made it hard to light. I wouldn’t see anyone’s face until the set would go “hot.” When the actors remove their masks, only people with red-zone passes can be on set. If it’s an interior we have to clear the room to be sanitized after I think every 45 minutes.

It’s hard to work with all that stuff on your head — especially when it’s your job to see and communicate. You get used to it.

Filmmaker: What about the crowd scenes outside the high school?

Gonçalves: We didn’t have a lot of extras, maybe 40 or so that we kept moving around. We would block-shoot, then move the background around in the frame. It was a dance.

Filmmaker: A lot of episode 104 takes place in and around a motel. You have long handheld shots that go up and down corridors and stairs. Plus a lot of it is at night.

Gonçalves: Daniel and I decided during prep that it would be emotionally powerful to make the scene where Chester confesses his love to Sam  [Nathan Stewart-Jarrett ] a continuous shot. We went to the motel and figured out the blocking, with me recording Daniel and the AD doing the dialogue on my iPhone so we could time out the take.

My gaffer David Ghegan and key grip Anthony Marra and I worked out ways to incorporate the lighting in the motel into the shot. We ended up adding sodium halides to ceiling fixtures, and hid source lights behind every corner and vending machine. On the day I think we did ten takes of it as a seven-minute oner. I had a powerhouse of an A camera operator, Orlando Duguay, who could do anything.

Filmmaker: How many takes were you averaging?

Gonçalves: [laughing] We do many takes. But it varied depending on the director. Some like a lot, some don’t.

Filmmaker: In the season one finale, you have these remarkable shots on a pickup truck at sunset.

Gonçalves: We had three nights to shoot that. That was a challenging sequence, to shoot practically on a live street at night with eight characters — nine if you count the baby— in a truck, working 360 degrees. It was really hard, but worth it.

Looking back, some interior shots almost look like rear projection. If the scenes had been in the cab of the truck we might have been able to do it on stage. But because we had scenes in the truck bed, you had to have the elements, especially the wind and the grit.

Filmmaker: Do you think you changed your visual style for TV?

Gonçalves: I approached this the same way I’ve approached any my narrative work. In comparison to shooting a music video or commercial, obviously the storyline is paramount. It’s not only what image looks cool and what cinematic statement to make: it’s more about what serves the story. Generation is so POV-driven that my job was to empathize with the characters, get inside their heads, think how would that person experience this moment. The style should emphasize that experience, and ultimately say nothing else.

It’s a more intimate collaboration on a feature than a series. There are so many more people involved in TV, different directors for example. I did an episode with Andrew Ahn, who directed Spa Night and Driveways, and Channing Godfrey Peoples, who directed Miss Juneteenth. It’s fun to work different ways, but it’s like speed dating at times.

I’d love to do something sci-fi next. A narrative based in another world, something from deep in the imagination. I love creating worlds outside perception.