“Our Aim Was to Document a Reconciliation Process Led by Kurdish Women”: Alba Sotorra on Human Rights Watch Film Festival Doc The Return: Life After ISIS 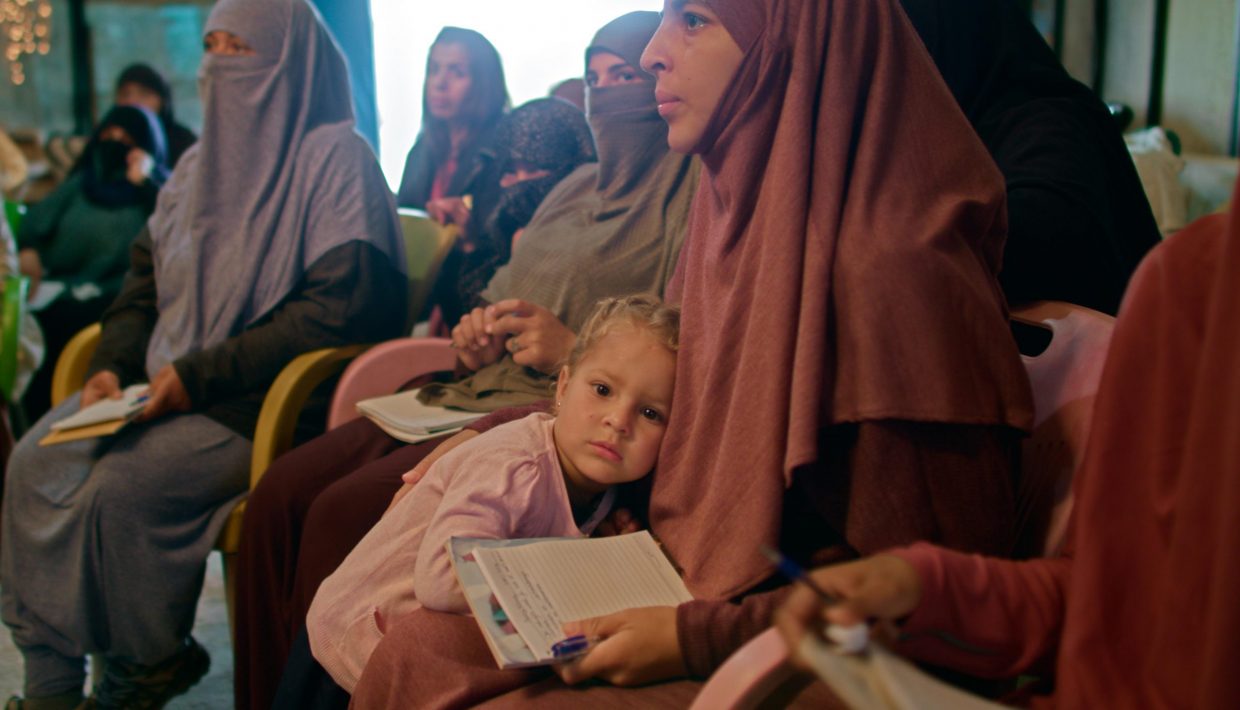 The Return: Life After Isis

by Lauren Wissot
in Directors, Interviews
on May 20, 2021

Terrorist or victim? That seems to be the animating question behind Alba Sotorra’s The Return: Life After ISIS. Premiering at SXSW, and selected for the Special Presentations section at this year’s virtual Hot Docs (April 29-May 9), the film is an up close and personal look at a group of Western women caught in nightmarish limbo in a detention camp in northern Syria. All left behind First World lives – in the US and Canada, the UK, Germany, and The Netherlands – with online propaganda-shaped dreams of rescuing fellow Muslims and finding shared community. And all ultimately became disillusioned and disavowed the terrorist organization after years of war zone trauma. But no matter. Regardless of country of origin, not a single government will allow any to come home.

Barcelona-based Sotorra (Commander Arian) fortunately found time just prior to the film’s upcoming run at the Human Rights Watch Film Festival (May 19-27) to fill Filmmaker in on venturing into this Kurdish-controlled camp of Kafkaesque last resort. And on how she and an all-female crew managed to cut through the media sensationalized takes to capture the nuanced stories of those caught up in a shameful global game of political hot potato.

Sotorra: The access to the detention camps is very restricted. To date, nobody had the kind of access we had. The reason we were granted this access was due to the trust I’d built with the Kurdish administration, in charge of the camps, during the shooting of my previous film Commander Arian.

Filmmaker: Were all these women anxious to get their side of the story out to change hearts and minds, and especially government policy? Or were there some who declined to participate?

Sotorra: Building trust with the group of women that participated in the camp’s therapeutic workshop was a very long process. They had been mistreated by the media and were concerned we would do the same. Once they realized we were not there to judge them, but to listen, most of them opened up. A few of them didn’t, however, because they were pressured by other women in the camp who still felt connected to ISIS ideology. They abandoned the workshop.

Filmmaker: What was it like working with an all-female – and I’m guessing mostly local – crew? Did special safety precautions have to be instituted?

Sotorra: No safety measures were needed, but our internal process as a crew was intense, and we had moments of tension. It was very hard to spend time with those from our crew who felt these women were the enemy.

In the first days, we had many discussions about the veracity of what we were filming; we had the feeling that the women were not honest, and this frustrated us, made us fear that we were making a film based on lies. But this feeling changed as time went on. Slowly, they opened up and started to speak from their hearts, without thinking about what they were going to say.

For most of them it was the first time they were sharing their feelings and emotions. They had been living for years under a very repressive regime that would punish any dissidence. They lived in constant fear and paranoia. The workshop gave them the tools and the space to think back, to reflect on their bad choices, to express their pain and their remorse. And they realized they were not alone, and that many other women went through the same.

Filmmaker: One of your most interesting characters is Sevinaz, the Kurdish women’s rights advocate who runs the workshops in the camp. She’s torn between the victimhood of these women and the victimhood of her own people, who these women’s husbands slaughtered and terrorized. So how did you get her to open up to your camera? She appears to be most reticent of all, not really having any (self-serving) reason to participate.

Sotorra: I met Sevinaz many years ago, before the filming. She is a good friend. I think she felt it was important to show to the world the responsibility that the Kurdish are taking with our citizens who joined ISIS – in contrast to what our governments are doing. While our governments are washing their hands of this matter, the Kurdish society are taking care of our nationals in improvised detention camps, without enough resources. And they carry this duty with an extreme sense of humanity. They are the ones who lost more under ISIS, and now they are the first ones that are ready to listen to their former enemies; they are ready to open a bridge for dialogue, ready to forgive and to give a second chance. After so much violence, they know that dialogue and forgiveness are essential for peace. I think that bringing this message out to the world is very important for Sevinaz, and for all Kurdish women.

Filmmaker: To varying jarring degrees these former ISIS wives are simultaneously incredibly naive and extremely media savvy. Shamima especially in one-on-one interviews seems to be shaping her words for the government audience she hopes to reach, always conscious of what to say to save herself (be it from ISIS backlash or UK demonization). So did you ever fear you were being used to further a cause – or did this not matter since that cause was righteous? And how did you protect against manipulation (if you did)?

Sotorra: Shamima is 19-years old (and left the UK to join ISIS at the age of 15) and she has gone through a deeply traumatic experience; she is broken inside. (Whereas I’m a 40-year old filmmaker trained in my job; it is not so easy to manipulate me. Ha.)

This film was not born to further a cause. Our aim was to document a reconciliation process led by Kurdish women. In the beginning I didn’t even have any interest in interviewing the women participating in the workshop. I myself also had a lot of prejudices when I entered the camp for the first time!

But Sevinaz and the Kurdish women taught me to listen without judging. I think that from our offices where we sit, far away from the war, it is more difficult to understand that hate only leads to more hate. But when you live an extreme situation of violence like Sevinaz and the other women in our film, you realize that dialogue, compassion and understanding are the only way out.