Allowing Room for Shifts to Happen: Noah Hutton on the Decade-Long Making of His Brain Science Doc In Silico 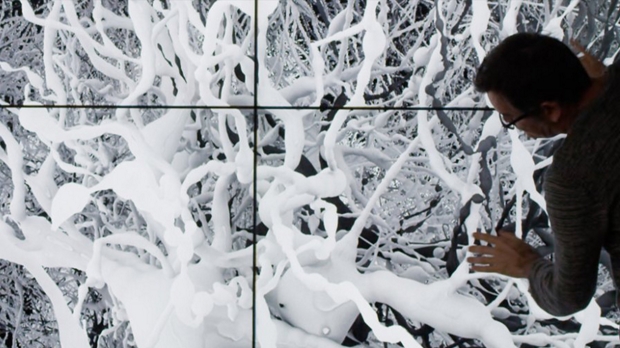 Since releasing his first documentary in 2009, Noah Hutton has kept busy. That film Crude Independence and its follow-up Deep Time (2015) were both about the consequences of oil extraction in North Dakota, and he followed them with a multi-platform installation at Times Square in 2015 and the science-fiction film Lapis, which he wrote and directed, in 2020.

His new film In Silico was in production throughout the entire time that Hutton was working on those other projects. It’s a longitudinal chronicle that Hutton began in response to a TED talk by Israeli scientist Henry Markram in 2009, where he announced that his team at the Switzerland-based Blue Brain Project would completely map the human brain—its labyrinth of neurons and synapses that create our species’ consciousness—in the next ten years. Excited by the prospect, Hutton contacted Markram and gained permission to film the entire process. Over the course of the decade, however, the goalposts kept shifting, and as Hutton kept interviewing both those who did and didn’t believe in the project, he found his own belief in Markram waning. Still, even though the human brain remains unmapped, In Silico is an engaging examination of the scientific process, the controversies and disagreements that shape the international scientific community, and the inevitable funding issues, politics, and showmanship that work their way into a project as immense—and expensive—as this one, which is described as a CERN large hadron collider for the human mind.

In Silico had its world premiere at DOC NYC last November, with its public release in late April this year. Commendably, the filmmakers partnered with independent theaters around the country to make the film available virtually and in real life as theaters began to reopen; the premiere was held at the Coolidge Corner Theater in Boston, which was followed that evening by an online Q&A session with Hutton and Werner Herzog, who, not surprisingly, is a fan of the film. The film’s website has information about its availability this summer.

Filmmaker: As Werner Herzog pointed out in your conversation, perhaps the most striking thing about the film is the change in your own thought process about Henry Markram and his work. Can you talk about what you learned and how your thinking evolved over those ten years?

Hutton: I started editing the film near the end of the decade of making it, so when I was about 32. But I wanted to make sure to give space in the edit to the 22 year old who started making the film all those years ago, seduced by the glossy visualizations and 10-year goal that Markram laid out in his TED talk. I think part of growing through my twenties while making this film was inevitably becoming more aware of the criticism of this project, but on a more personal level, it was also feeling the milestones that had been dangled in front of me during those early years of interviewing Henry and others at the project start to slip out of reach, pushing further and further away on the horizon. So I definitely became more skeptical as the years went on, and I realized that a lot of what I had been told was perhaps better described as sales pitches than scientific timelines grounded in reality. In this way making the film over so many years allowed for a kind of baked-in critical development, a way to audit statements that had been made about the future within that future itself, inside the same film.

Filmmaker: Obviously Markram didn’t succeed in mapping the brain by his ten-year deadline, but how else was the finished film different from what you first expected?

Hutton: The only real expectation I had initially was that something notable would happen by the end of the ten years, and that if I put my head down and kept making the film, I would get to capture that eureka moment at the end of the decade. I think I did really take this ten-year timeline seriously, and held onto it long after I knew intellectually that it was a fiction. But I think I had still expected or perhaps just hoped for some kind of neat resolution that would line up with those ten years. It ended up being messier and harder to find, which is somehow reassuring, since that’s been my experience making other documentaries. Of course the whole film is unexpected from the position of what I thought it would be when I started, and intentionally so, as there was an attempt to let the film reflect the shifts that happened over its timespan rather than reverse engineer the perfect story.

Filmmaker: What else was it like to film over ten years? Do you have any advice for filmmakers embarking on a longitudinal project like that?

Hutton: It sounds more intimidating than it is: in the end, I probably shot as much footage as if I had embedded with the film’s subjects for a half year or so and filmed it all in one go. It was just spread out over tiny trips, one or two a year, for a decade. I think the harder thing is about interest—it takes such a deep and persistent interest to stay making a documentary film, but maybe it’s a little easier to keep that flame burning when it’s all done in one go over a six-month stretch, say. With this project, I lost interest along the way, and I had to rediscover it. So instead of chasing the question of whether they’d simulate a whole brain by the end of the decade or not, I started to get more interested in how a digital simulation would even grapple with the noisiness and variability of biology. That question got me hooked back in. I think making a film over a long timespan can provide a reflection of how much each of us changes over the years, and I found it helpful to let that process seep into the film itself. Core, essential things remained very similar, of course, but I think it’s important to allow room for shifts to happen over time in the points of entry we take to any work we do. In this way the project continues to be a living thing moving along with you.

Filmmaker: Herzog talked about this as well, but at what point did you decide to include yourself as a subject? How did that help you shape the narrative in the edit?

Hutton: Probably in the final year of filming and as we entered the edit I started to feel like it would be necessary to include some of my own experiences in the film through voiceover and seeing me here and there, which I had never done before in my previous documentaries and at first felt quite strange to do. But in doing so I think we were able to build in the critical oscillations I felt while making the film: namely that I would feel critical when I talked to the critics, and then when I talked to Henry, I’d believe again. I thought this was important to include because when there’s room for debate and there’s already significant controversy around a project, building in my own experience going back and forth and developing my own critical distance over the years maybe gives the audience something more to latch onto and follow in a narrative sense, because you see me start in one place and end in another.

Filmmaker: Speaking of post, what was that process like with your co-editor Camille Gregoire? It was really in that final year?

Hutton: Camille and I started during my last year of filming so that we could begin to get a bit of an edit together and see where there might be some holes for me to fill in during my last shooting trips. It was crucial to get some outside perspectives on the material. Camille and I then worked in parallel through most of the edit, doing first passes of sequences and then giving each other feedback and gradually stitching a cut together. It was a long edit and a tricky one, but I was lucky to get to work with her and also with our producers Kellen Quinn, Taylor Hess, and Jesse Miller, who were very involved in the edit, reviewing cuts and giving notes, sitting in the edit regularly for upwards of a year.

Filmmaker: Can you talk about the music? You’re credited with creating the score, and there are songs by Computer Magic and classical composers. I’m especially curious if your use of Strauss’s The Blue Danube Waltz was meant to invoke Kubrick and 2001 as much as anything else? (I noticed that your low-angle framing of the Blue Brain Project sign looked sneakily, and maybe ironically, like a black monolith in the desert—or maybe I’m reading in way too much.)

Hutton: I only used The Blue Danube because the Blue Brain Project used it first. When they first took me into their visitor screening room and showed me their first fly-through of simulated neurons, it was set to The Blue Danube, as I mention in my voiceover. I was glad to have this excuse to use the piece and with it the 2001 associations, as the Blue Gene supercomputers did have quite a monolithic stature to them. Computer Magic (now known as Danz CM) generously gave us a few tracks to use in the film—I’ve been a fan of Danz’s music for many years now so that was a thrill. And otherwise I compose the score during the editing — it’s the part of the process I enjoy doing maybe the most.

Filmmaker: In contrast to the audio, this is essentially a film about creating an enormous graphic object, and your own graphic design stepped up to that level. What was it like to create your graphics and animations with Andrew Khosravani?

Hutton: Andrew’s animations are tremendous—I was so delighted with what he created for this film. We talked about wanting to head in a quasi-Waking Life direction with our look, since we were up against such slickly produced, glossy and modern CGI renderings of brains, it felt right to work against that a little bit with the look of our animations. And I think there’s something playful about them which fits the spirit the film, trying to find moments of levity here and there, a bit of a visual counterbalance to the dense topics at hand. I like your interpretation, that this is ultimately a film about an enormous graphic object. An auteur-driven, big data vision of what’s inside our heads.