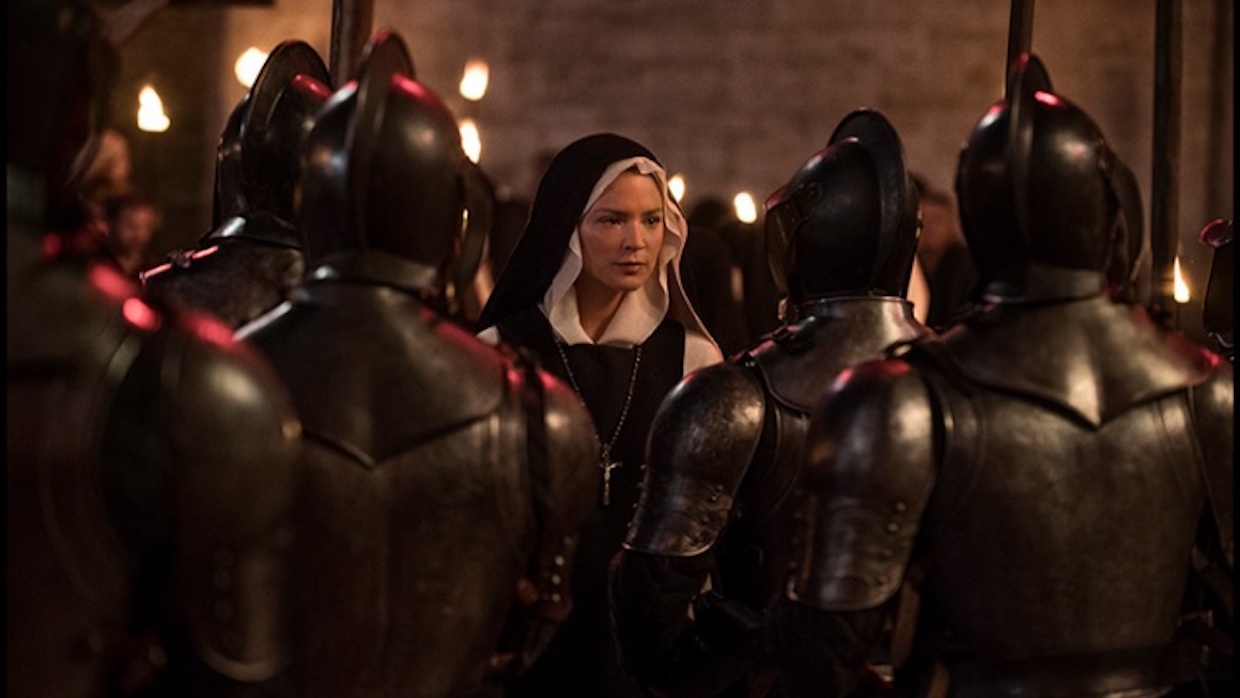 Dutch director Paul Verhoeven’s “lesbian nun movie” Benedetta may have taken two extra years to land (Verhoeven’s hip surgery in 2019 prevented him from completing post-production in time for that year’s Cannes), but its prologue wastes no time informing the audience of its mischievous timbre (for the handful heading into it expecting anything close to reverence), slipping in flame-farting jesters and a bird (ostensibly possessed by the Virgin Mary) dropping a turd in a bandit’s eye at our young heroine’s request. Adapted from Judith C. Brown’s 1986 book Immodest Acts: The Life of a Lesbian Nun in Renaissance Italy, the film likewise details the case of 17th century Catholic mystic Sister Benedetta Carlini, imprisoned for engaging in a sexual relationship with one of her nuns. I haven’t read Brown’s source material, but I feel confident it doesn’t come close to the camp spectacle Verhoeven assembled here. Digital serpents, Jesus as a hot and lethal knight and the already renowned wooden dildo whittled from bottom of a Virgin Mary statuette lend levity to the provocations (even if Verhoeven dubiously denies any intention of using his films to provoke), making for a wild time.

Coming off of the (relatively) prestige-y Elle, Verhoeven doubles down on his ongoing concerns regarding spirituality and the ways female desire and agency are represented in cinema. (“Your worst enemy is your body, best not to feel at home in it.”) The queering of the nun picture is nothing new; Jesús Franco, Norifumi Suzuki, and Jacques Rivette got here about fifty years ago—The Nun (1966) remains my favorite Rivette—but Verhoeven’s brand of exploitation may ride the closest to the lines segregating classes of taste, the puritanical divide between A- and B- grades of media that have aspirationally guided us toward that which we may regard seriously. Benedetta gleefully subverts tropes and stereotypes about movie nuns as represented in the religious arthouse, and if I hesitate to place it in the higher tiers of Verhoeven’s filmography, it’s because I could never completely relax into it as a unique space of inquiry; the images and words often feel like a list of moments, ideas drawn up to spit in the face of a way things are done. Or it’s the negative space of every video I was shown in Sunday school, all the imaginings that those lessons were desperate to wax out of me. It’s what I wanted it to be, how I wanted it to look—agreeably devilish. I think I prefer Verhoeven when I’m tempted to smack him, not when I’d like to give him a high five.

In an entirely register, Panah Panahi (indeed, son of Jafar/co-editor of dad’s 2018 drama 3 Faces) unveiled his debut feature Hit the Road in the Directors’ Fortnight today, and the film ought to stand as one of the breakout surprises of this year’s edition. The film bares many of the same hallmarks that have populated the last thirty-plus years of Iranian cinema—driving, familial rupture, state oppression—as a young man (Amin Simiar) drives his hyper kid brother (Rayan Sarlak), distressed mother (Pantea Panahiha), invalid father (Hassan Madjooni) and the family’s terminally ill dog, Jessie, across pistachio-tinted mountains toward Iran’s border with Turkey. The motivations for this trek are cryptically withheld (a strategy conveniently justified in the narrative by a need to leave the loose-lipped little brother in the dark), but the ominous agenda peaks in via the driver’s disquieting expression as well as the family’s repeated utterances of “in extremis” (much to the non-Latin-speaking youngster’s annoyance), lending the family’s otherwise spirited dynamic a palpable sense of foreboding.

Panahi’s direction effectively cuts through the film’s gravitas, and Hit the Road ends up being fairly singular with regards to usual offerings from his national cinema. For one, he’s not shy about including surrealist touches, including a hand-drawn piano on the father’s cast which allows the youngest son to play the film’s non-diegetic music, and a star-gazing interlude in the film’s final act that sees a grassy hill transform into a bottomless galaxy of stars—a gesture that, along with a drone shot that zooms across the desert floor, effectively invokes 2001: A Space Odyssey’s Stargate finale, a sequence conspicuously mentioned in an early conversation between the mother and her oldest son. (Tati is another late-period master whose influence shows up on more than one occasion, including a clever visual gag involving a dog tied to a red chair.) Banter between everyone on screen is sharp and precisely pitched to always be both furious and affectionate. Some unfortunate plottiness drags the movie down some notches in its latter half, which is a shame because Panahi seems to be naturally gifted with creating images that don’t need verbal context. A scene of the father character discussing the unconscious, and how the extinct Iranian language of Azari was superior for expressing it than Farsi, suggests this is an area that Panahi’s is actively grappling with.