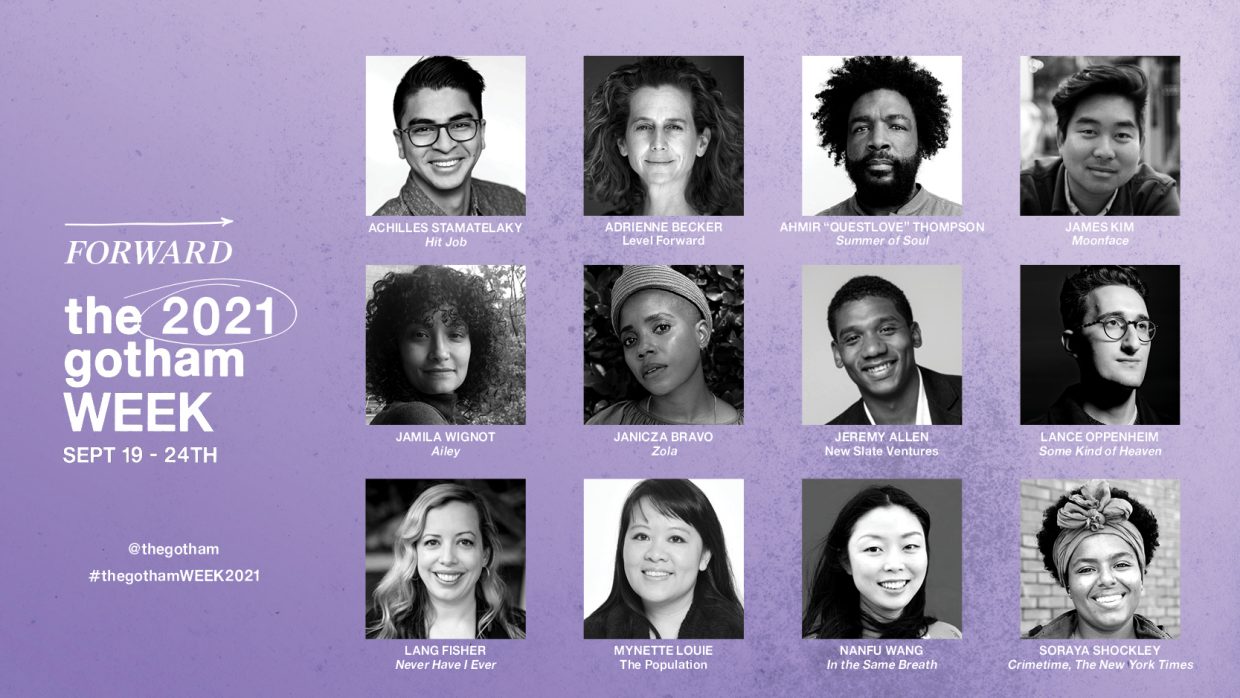 The Gotham Film & Media Institute, Filmmaker‘s publisher, announced today the public programming for its upcoming Gotham Week Conference, which will take place virtually from September 19 – September 24. Covering audio, doc and narrative feature filmmaking, and TV, the series of events will, according to the press release, “take a deep look at how the media and entertainment industry is reinventing itself in the wake of the pandemic as well as the increased attention on diversity, equity and inclusion.”

Filmmaker is partnering with The Gotham for a keynote series, Conversations in Creativity. This issue’s cover filmmaker, Ahmir “Questlove” Thompson (Summer of Soul) will be in dialogue with Ailey director Jamila Wignot. And Zola director Janicza Bravo, a former Filmmaker 25 New Face, will converse with her editor, Joi McMillon, whose other credits include Moonlight and The Underground Railroad.

From the press release

“As the landscape evolves for independent storytellers to get their stories made and shared with audiences, it’s important that the Gotham Week Conference provide solutions to the very challenges they face around navigating the industry and specifically around financing, production, and distribution,” said Kia Brooks, The Gotham’s Deputy Director and producer of Gotham Week. “Whether you’re an audio or TV creator, fiction or nonfiction filmmaker, we hope this year’s Gotham Week will continue to encourage those in our community to move forward with their projects and careers.”

Opening day of the Conference, September 19th, will look at the current state of the industry in terms of talent pipelines, the landscape of documentary artist support programs, the emergence of episodic content across mediums and more. Each subsequent day of the conference will cover a vital aspect of the media & entertainment industry, such as “People,” “Story,” and “Business.” The full list of these panels can be found here.

There will also be a day of case studies focusing on works by director Nanfu Wang (In the Same Breath); Originals Series Hit Job; director Michael Mohan (The Voyeurs); Sarah Adina Smith (Birds of Paradise); and podcaster Jake Brennan (Badlands).

In addition, Gotham Week will host their signature Direct Access program, which features intimate workshop-style sessions that explore specific topics lead by industry decision makers and insiders. This year’s session will include a workshop lead by the Documentary Accountability Working Group around accountability in nonfiction filmmaking; a workshop on pitching investors and collaborators in partnership with Seed&Spark a workshop for creators interested in making the leap to audio storytelling in partnership with Audible; as well as an “Insiders Tips” session with independent producers discussing their film financing journey in partnership with Film Independent.

After the success of last year’s free programming offerings, Gotham Week will continue to offer free conversations through IGTV with partners such as Undocumented Filmmakers Collective, Virginia Film Office, Missouri Film Office, Produce Iowa – State Office of Media Production, and Mississippi Film Office. These conversations will cover topics such as equity for undocumented filmmakers in the media ecosystem, opportunities for filmmakers outside of tax incentives, writing personal stories as TV pilots, and more. Additionally the event will host virtual networking events highlighting Gotham programs such as Gotham EDU, Gotham Z and Owning It. Owning It specifically will host a networking event in partnership with organizations such as New York Women in Film, Women in Film, and European Film Market’s EFM Startups.