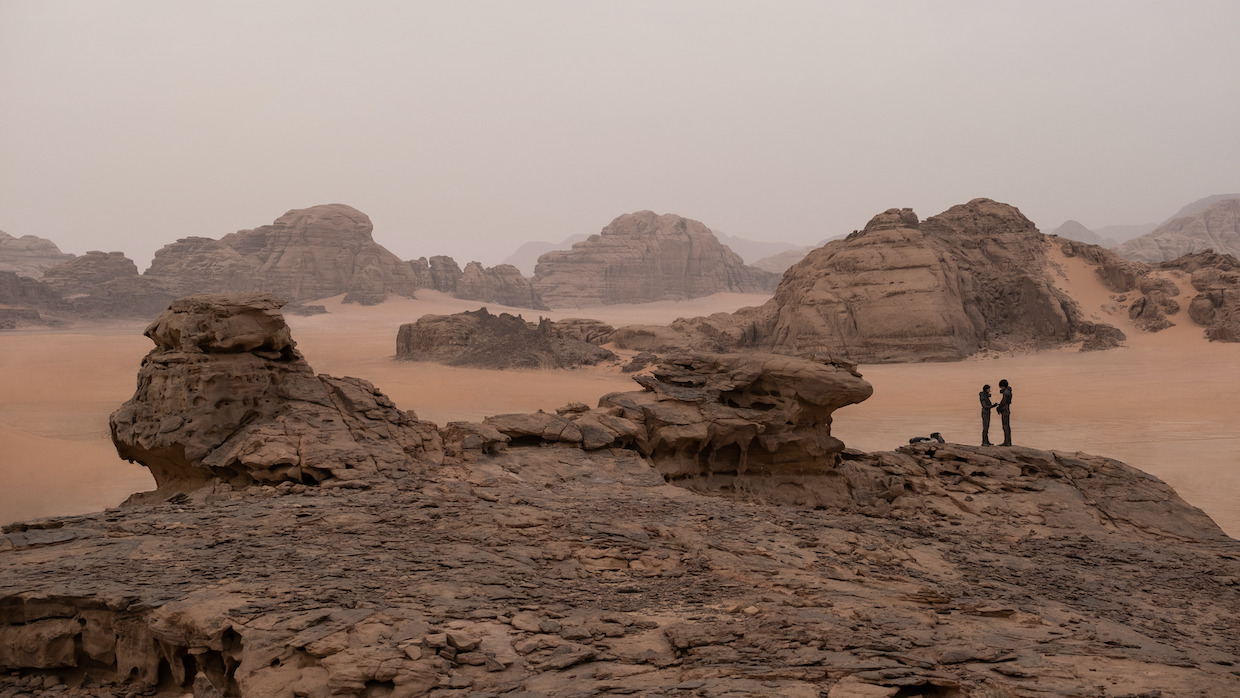 Two of this year’s high-profile Venice premieres, Dune and The Card Counter, are auteurist works recognizable by multiple of their makers’ signatures. Both star Oscar Isaac and arrive as pandemic-affected productions that (try to) bear no trace of that circumstance. Dune finished principal photography before COVID-19’s global spread, while The Card Counter was 3/4 of the way through production when it hit; Isaac completed its rescheduled remainder before flying to Hungary for Dune reshoots.

Optimistically subtitled Part I (this covers the first of the novel’s three volumes)*, Dune arrives with the unplanned burden of attempting to make the case for the Big Screen Experience—Denis Villeneuve’s been very publicly unhappy with the pandemic initiative of a simultaneous theatrical/HBO release. The film’s first act, however, is regrettably anti-persuasive on the theatrical viewing front: widescreen, shallow-focus close-ups of people talking through expository set-up. Frank Herbert’s source novel has infamously defeated previous adaptation attempts thanks to the challenges of compressing a mythology that’s surprisingly complicated given how simple it is on a fundamental level—two families warring for control over the same territory, whose indigenous inhabitants resist both. The draw is spectacle, yet it takes a long, dull time to get there.

Timothée Chalamet is Paul Atraiades, next in line to maintain his family’s colonialist practices by harvesting “spice” from planet Arrakis and reluctant to assume the enterprise. Chalamet occasionally shows off plausible swordfighting skills during the first 40 minutes—prone to joyously, seemingly unselfconsciously gamboling and weaving through most roles, here the admirably physical actor channels all that energy into this one action movie direction. Otherwise, he’s as weighed down by humorlessly functional dialogue as the rest of the cast, easier to identify by archetypal role than their sometimes complicated names. Mother Jessica (Rebecca Ferguson) is loving but fearful for Paul amidst palace intrigues, father Leto (Isaac) similarly caring but politically reactionary; weapons trainer Gurney (Josh Brolin) is seemingly hostile but deeply loyal, his counterpart Duncan (Jason Momoa) a emotional-puppy-dog alternative. Leading the bad guys are Baron Vladimir Harkonnen (Stellan Skarsgård, trapped inside what appears to be a Col. Kurtz latex fatsuit and bald cap) and warrior Globbu (an uncharacteristically uncharismatic Dave Bautista, whose performance tops out the growls-per-minute ratio).

As part of his research, it’s known that Herbert read T.E. Lawrence’s The Seven Pillars of Wisdom, echoed in Paul’s journey from ambivalent would-be representative to full-on desert rat walking off with Arrakis’s resistance. Whether Herbert saw Lawrence of Arabia isn’t known, but it’s impossible not to think of it, since Villeneuve’s Dune unfolds against identical-looking landscapes also shot in Jordan. Yet for all the sand and desert architecture, Dune under-delivers on both sheer scale and action. Momoa and Bautista are both fine fighters who get relatively little chance to kick ass, the rest of the cast is on dialogue duty and most setpieces are of the “CG ships crash through CG haze into CG sands” variety. Even I, a Dune novice, knew enough to expect that something called a “sandworm” would show up eventually and look cool; the dialogue promises its arrival throughout, like a teaser for the end of the movie you’re already watching—and it is in fact pretty neat when it shows up, but too little too late.

DP Roger Deakins was originally attached to this but split before production for unspecified reasons. His three previous collaborations with Villeneuve (Prisoners, Sicario and Blade Runner 2049) looked more like each other than they did the director’s work with other cinematographers, and I liked them more than any of Villeneuve’s other films accordingly. Here, working for the first time with Greig Fraser, Villeneuve suggests that—questions of color, grading, grain et al. aside—he does now have a consistent visual playbook all his own, which doesn’t turn out to be a good thing. There are ominously controlled overhead helicopter desert shots like Sicario, giganticicist and darkly colored interior sets out of 2049 and gauzy handheld dream vision shots of a woman staring out on an empty landscape around magic hour a la Amy Adams in Arrival. These go-to approaches are scattered between the more generic dialogue and action, and it makes the current limitations of Villeneuve’s visual imagination perceptible.

The biggest problem, though, is Hans Zimmer, whose score is incredibly loud and unremittingly the dominant sound for more of the movie’s 155 minutes than not. Zimmer’s approach to musical cultural appropriation has been blithe since at least 1994’s The Lion King, while his subsequent rise to Coachella fame has accelerated improbably. Both worlds collide in Dune’s score, a nightmare barrage of field-filling drums punctuated by the odd muezzin-ish call to prayer—given how fraught the material already is (brown-skinned desert peoples vs. The Man), the Orientalist tinting is poorly thought through. Every time I went to the multiplex in summer 2016, I’d walk past an auditorium booming the thunderous punching-sounds foleys and Zimmer’s score from Batman v. Superman: Dawn of Justice, and it never failed to make my life a little more unpleasant. Five years later, the most cogent thought I emerged from Dune with was, “Hans Zimmer must be stopped.”

I can’t improve on the coinage Paul Schrader came up with decades ago to describe his signature works as “man in a room” movies. As he recently reiterated to the Los Angeles Times’s Mark Olsen, “they usually involve a man alone in a room, wearing a mask, and the mask is his occupation. So it could be a taxi driver, a drug dealer, a gigolo, a reverend, whatever. And I take that character and run it alongside a larger problem, personal or social. [… In The Card Counter] the mask he wears is a professional poker player. And the problem that runs alongside him is that he is a former torturer for the U.S. government. So it’s a mix of the World Series of Poker and Abu Ghraib”—a fully accurate synopsis, to which I have little to add.

The Card Counter is fully a “late auteur” effort, where economy of means and distillation of thematic intent routinely crosses the line into dramatic lassitude, down to perceptibly/charmingly slow driving shots (anyone that slow during interstate travel would get rear-ended in no time). Isaac is the aforementioned Abu Ghraib torturer, pseudonymous William Tell, who now bounces from casino to casino grinding out acceptably small winnings. At night, like the protagonist of an underbudgeted Jean-Pierre Melville movie, Tell retreats to anonymous nearby motels; when he enters, he takes down not the mirrors (which Melville characters stare into before going to meet death) but the framed wall art. Then he sits and journals his thoughts, which are peak Schrader (“Is there a limit to how much it takes to reach expiation?”).

Card Counter’s main problem is the absolute lack of chemistry between Tell, his financial-sponsor-turned-love interest La Linda (Tiffany Haddish) and Cirk (Tye Sheridan), the more innocuously/platonically charged Jodie Foster to Isaac’s De Niro. (“With a K,” Cirk keeps saying—not until the credits did I know at which end the unorthodox letter went). The latter’s father was a soldier alongside Tell who came home, abused his family and committed suicide. Cirk wants homicidal revenge against Major John Gordo (Willem Dafoe), the private contractor who trained both Tell and Cirk’s dad; Tell, who alternates between laconic moodiness and awkward lunges into near-banter, wants to save Cirk from the probable consequences of his vengeful instincts. Even when all three leads are seated at the same table, they seem to be talking past each other on the world’s most awkward speed date for a surrogate family unit, with the would-be parents making ostensibly fond references to “the kid.”

In American Gigolo, Light Sleeper and First Reformed, redemption gets conflated with sex in the single figure of a romantic interest; saddled with the latest iteration of this unenviable function, Haddish is unprepared to make the leap to her “comic performer shows off dramatic chops” role. But both the hits and misses in Card Counter are irrelevant to its central charm, which is comparing/contrasting how it varies the tropes of Schrader’s self-created genre. Gigolo harvested “Call Me” for two hours of instrumental variations in Giorgio Moroder’s score, while Light Sleeper assigned Greek chorus function of sorts to Michael Been’s value-neutral, lyrically on-the-head songs. Similarly scored, Card Counter hands these duties over to Been’s son—Robert Levon Been (of Black Rebel Motorcycle Club), co-writing with Giancarlo Vulcano—and the results are truly dismal, aspirant imitation late period Talk Talk crossbred with one of Eddie Vedder’s gloomier days. (I can’t tell if one lyric, repeated over and over, goes “In my lonely admiration” or “In my lonely abnegation”—either would fit.) Like Dafoe writing with a bottle of wine in Light Sleeper and Pepto Bismal-fueled Ethan Hawke in First Reformed, Isaac keeps his very own diary of a country priest alongside a bottle of whisky, recording angst in voiceover that reads out the handwritten text. Dafoe’s handwriting was loopy but sloppily legible cursive, Hawke’s enviably neat longhand; Isaac demonstrates freakishly legible, disciplined and consistent cursive. Teaching cursive has been, by and large, phased out, so this is a record of a dying art, as is the film itself—20 years from now, no one will be making movies like this.

Most perverse and moving, though, is Schrader’s third riff on the ending of Bresson’s Pickpocket, where protagonist Michel meets his love Jeanne in prison. She rests her hand against the wire separating them, he puts his head up and announces “What a long, strange path I’ve taken to find you.” American Gigolo first repurposed this as a final prison reunion between Richard Gere (points at screen: “That’s the American gigolo”) and Lauren Hutton, speaking on phones separated by a transparent pane. “My God, Michelle, it’s taken me so long to come to you,” Gere says and rests his head against the divider as the camera tracks in from her side, arriving at an angle where it almost looks as if she’s transcended the barrier to touch him—a striking effect, held briefly before a cut to black and credits. In Light Sleeper, Dafoe’s not in jail proper but a detention center awaiting sentencing; Susan Sarandon comes to visit and reaches out to hold his hand across the elbow-height token wooden barrier separating them. This time the shot’s held for the first half of the end credits, a solid minute-plus during which the strain of holding the position on both their arms is perceptible. Card Counter takes this final gesture much further, with a reunion now stripped entirely of dialogue and a final shot of just Isaac and Haddish’s fingers reaching out, a glass pane separating them in the frame’s middle. This time, Schrader has his performers hold their position for the entire end credits, during which both performers adjust their fingers and drop their wrists as the shot rolls. This metaphysical reconciliation is now fully rendered as a feat of mild physical endurance, a devotional gesture both odd and touching for the reverence it shows this ending and its faith in its enduring power, no matter how many times distilled and refracted.

* Full disclosure: I try to read the source novels of films I write about, time permitting, but there was zero chance I was going to ingest the 700ish pages of Dune. I did try to read it as a pre-teen, when I made the dumb mistake of trying to read the 50+-page appendix first and was quickly overwhelmed by the sheer volume of made-up proper nouns. Wikipedia, of course, is no substitute for direct knowledge, but this entry’s credibly thorough and I’m reasonably sure none of what I’m about to say is completely off-base.↩