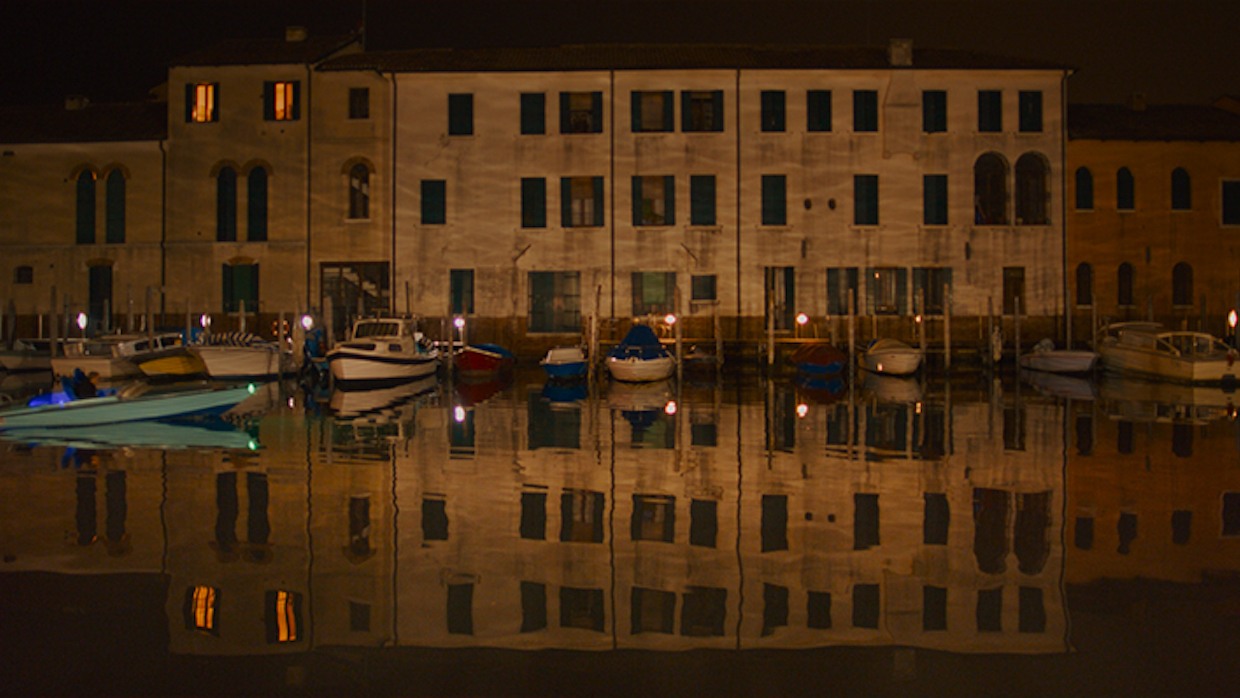 by David Katz
in Directors, Festivals & Events, Interviews
on Sep 8, 2021

Director and documentarian Yuri Ancarani carries significant reputation and exposure in the art world—he is arguably vaunted there more than in cinema—but his recent Venice premiere Atlantide unexpectedly evokes some unlikely multiplex-oriented fare. As more audiences and critics see this work, will comparisons reign towards Michael Mann’s irrepressible Miami Vice from 2006? What about—of all things—the Fast and the Furious franchise? There are little streets and tarmac in Atlantide’s observation of the Venetian lagoon, so the disaffected local adolescents must channel their energy (and indirectly, their sexuality) into pulsating barchino (speedboat) races—and we all know about the proportionate relationship between motorsports and fatalities.

Similar to kindred spirit Roberto Minervini, the Italy-based Ancarani operates here on a more porous boundary between documentary and fiction than in his Locarno-awarded The Challenge. The street (or canal)-cast participants play heightened versions of themselves, but Ancarani—operating without a script or daily plan for shooting—devises dramatic scenarios and a steady plot arc. The neck-tatted Daniele is our focalising character, an avid but somewhat underachieving speedboat fanatic joined and observed in many scenes with his philtrum piercing-sporting girlfriend Maila.

Psychedelia is Atlantide’s endgame: the film culminates in a quite-extraordinary near-10 minute sequence, folding Venice’s bridges, canals and sand-coloured architecture in on itself like an eerie hand fan. The lysergic resonance is utterly intentional: Ancarani’s chosen kids are mainlining drugs, dealing them sometimes too, as part of their lifestyle. In an unusually immersive film, this is we’re granted an even more subjective view of their existences, a civilian underbelly divorced from the typical tourist image of the Venetian islands.

It’s also a passage of the film that would not seem incongruous presented in isolation, somewhere in the bowels of a hushed, darkened gallery, a bit like the adjunct, multimedia pieces of Albert Serra’s recent work. Ancarani reflected on this and more in our conversation on the Lido.

Filmmaker: Was this a long-gestating idea or something that came about more spontaneously?

Yuri Ancarani: The idea came spontaneously. For professional reasons I often happen to go to Venice for a few days or a week most years, and I noticed those little speedboats, with music, that were pumped up and custom-painted. The first time I saw them, over 15 years ago, I asked about it: what is it, what are they, and Venetian people told me they should not exist. But that was something I’d seen, so I can’t try delete it from my view. When I get the answer they should not exist—that arouses my curiosity and my interest.

Filmmaker: From that observation, how did you further develop your initial idea for the film?

Ancarani: I wanted to make a film set in Venice—I am Italian and live in a city that’s two hours from Venice, and I’m convinced that I know Venice. And if you know Venice, the first thing you have to know is the lagoon, and you have to acknowledge and realise that Venice is an island, surrounded by  important little cities that are islands themselves. And Venetian people live on the water and move from one island to the other, very simply. They go shopping on another island, they go to an electrician in another island. This is something that is not known – no one knows it, not even Italians. If you don’t know this reality, then you cannot understand its people. And we cannot understand the mindframe of Venetian adolescents, and what their relationship with the speedboats are. This is why you’re seeing Venice like never before—it’s a pure Venice through the eyes of teenagers.

Filmmaker: I’m intrigued to hear about how you cast the film. Do you relish integrating yourself into these unique subcultures and gaining access?

Ancarani: Italy used to be very rich in celebrities and incredible actors, and each one of them embodied a specific character; now, we are all healthy and wealthy, and therefore this diversity in the characters that were embodied by the actors no longer exists. The curve has somehow been flattened down, and the faces are no longer strong characters. So, I had to look for them, because the celebrities that were once parading down the red carpet in Venice no longer exist. When I saw Daniele I saw very intense emotions, and when I framed him I realised that there was an intensity that I had not seen in people for a long, long time.

Filmmaker: Much of Atlantide was filmed in 2019; some was shot over the pandemic. I’ve heard you describe this film as focusing on a “dying world,” contrasted with the young people who are more attuned towards the future. Do you mean this in an ecological sense? An economic one?

Ancarani: The wrong educational system has been enforced for centuries, and is still applied everywhere in terms of transmission and education, that makes the male figure always associated with a desire for power, a desire to win, to be first and with no idea of sharing, of empathy with the others. And what matters is just winning and being the strongest, never to lose. This is an imprinting teenagers start to have when they get to adolescence: and their goal is to be winning and be stronger, and that imprinting brings about the adults and men we see in society nowadays. We keep on complaining on a daily basis, but we neglect the fact that we should start pondering on these sorts of issues if we wish to be able to solve them. Tthe problem is a mentality, a frame of mind, that has been ruling and prevailing for centuries. This is very much symbolised when Daniele starts to talk, and the fountain starts to leak [from the sea onto the Venice coastline] and we get to the problem of high water. There’s no difference between Daniele, his friends, his enemies, their motorboats—they are a mask, you know, exactly the same image.

Filmmaker: Could you talk me through the process of achieving the visuals in the final ten-minute sequence? I know the film was shot with the lightweight RED Monstro 8K, but was curious if there was more manipulation. And what inspired you to conclude the film in this way?

Ancarani: All of us should think about having a psychedelic experience—there has to be a moment where you’re able to lift your feet and fly—and the problem is nobody does. This film was born only to accompany the viewer, hand in hand, and lead them through a psychedelic experience. What do I mean by this? It means that all the frames, all the images that you see, will need to be interpreted, and therefore the viewer will start questioning themselves a bit, finally. Regarding the technique, I just tilted the camera! 90 degrees. It’s a stroke of genius—I haven’t done anything special.

I started asking myself: these kids are on synthetic drugs, from morning to evening. How can I make them [the audience] share in that psychedelic experience with my resources, the visuals of my own camera? And all of a sudden, at 4.30 in the morning, I had that idea and started shooting that scene, and it poetically, and coincidentally ended at dawn [the actual dawn, not 6.00].

Filmmaker: Who are your primary influences, or artistic heroes, not just in in cinema, but also moving image and gallery art?

Ancarani: I approach filmmaking as a video maker, and I think we should stop separating, and shutting video away from cinema, because video is still the newest form of moving images, and we not must delete them, but quite the opposite: it’s a matter of being able to play with light and the speed. The cinema needs video. [jokingly] I’m the first master of video!