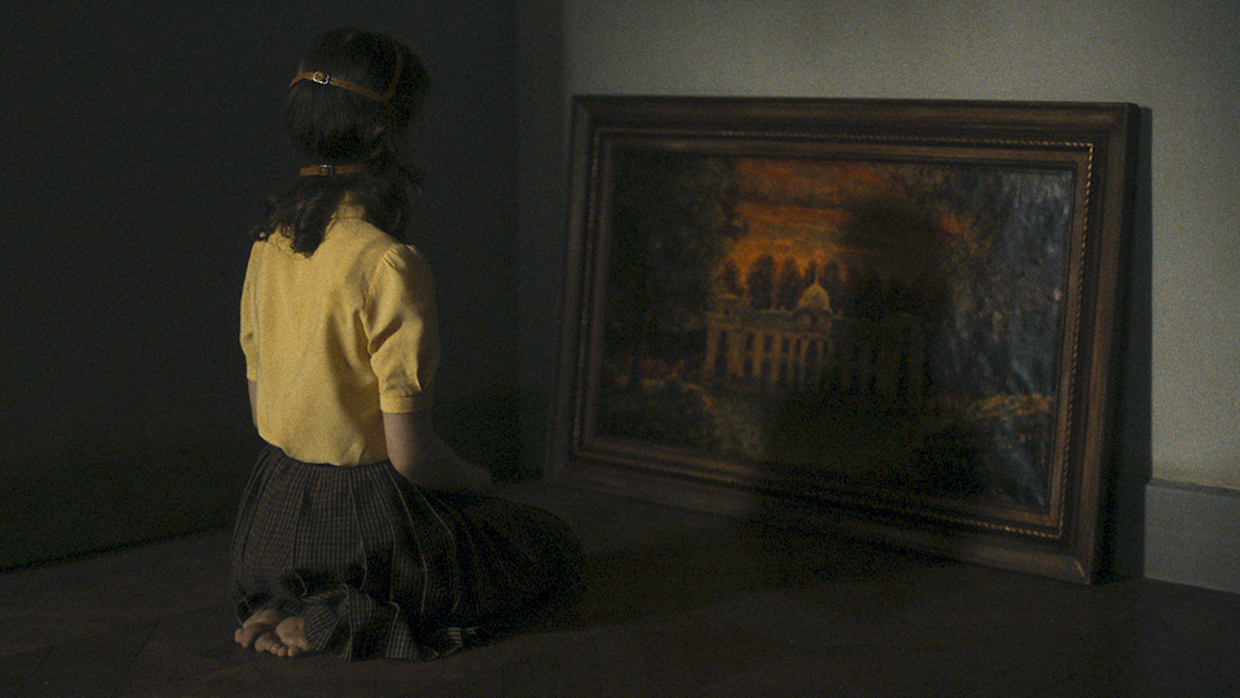 Lucile Hadzihalilovic*’s Earwig is, in broad outline, synopsizable with the same sentence as her first two features, Innocence and Evolution: a child (or group of children) grows up in deliberate isolation from the wider world under the watchful gaze of ambivalently motivated custodians, themselves operating under the direction of obscure masters. Intentions are unclear, but the fundamental fears—of puberty, parents, the body and its sexually-tinged conditioning for adulthood—remain clear and similar. The visual approach is always that of horror’s visual language without its traditional jolting sonic components—i.e., long walks down sinisterly lit hallways or down stairwells, no suddenly violent sounds. When I asked Hadzihalilovic about this in 2015, she explained that “the surprise or catharsis with a very loud sound or very graphic image, there is no such thing. For me, it’s like a fear, and the threat is always going on. In a nightmare, it’s very much about not having a catharsis.”

This is Hadzihalilovic’s English-language debut, a pandemic production which began shooting November of last year. These factors aren’t as important as they might be for other filmmakers: she’s never been dialogue-driven, preferring layered atmospheric unease instead, nor aimed for naturalistic performances—in any case, I doubt this has more than 100 lines. The pandemic factor, too, is imperceptible without background knowledge: Hadzihalilovic’s previous studies in isolation make her ideally suited for the production particulars of this moment. Earwig’s other new features include some graphic images (a mid-film act of violence and its startling ending) and a primary POV shift from child to caretaker—here, Albert (Paul Hilton), tasked with the care of Mia (Romane Hemelaers). Like her previous films, Earwig first establishes, then disrupts with the imminent threat of the outside world, a hermetic set of daily rituals, here charged by the inevitably sinister visual nature of orthodontry: Albert’s job has something to do with making sets of teeth from Mia’s mouth. One day, the check-in phone call from his masters (sounding like they’re dialing in from the Grey Lodge, deep voices against vinyl crackling and obscure hints of jazz) informs Albert it’s time to get Mia ready to leave their cloistered lodgings and hand her over.

I never did figure out by myself what was up with those teeth or how the titular earwig functions metaphorically (though the insect does make an appearance), let alone how Albert and Mia really intersected with the other characters eventually introduced. These questions are presumably somewhat explicated in Brian Catling’s source novel, which I read up on after and gleaned some details about (Albert is a war veteran, nicknamed “Earwig” for his extraordinary hearing abilities; for whatever reason, his task is to make teeth from Mia’s frozen saliva). As it stands, Earwig is both clear in its overall trajectory (aligned as it is with Innocence and Evolution) while being just specific enough about many plot elements that are allegorically obscure without bringing any suggestive mystery in their lack of intention—they’re just details that extend the running time.

Nonetheless, even in the weakest of her three features to date, it was a lowkey pleasure to be back in Hadzihalilovic’s distinct world. Earwig boasts all of Hadzihalilovic’s characteristic virtues, that aforementioned sense of how to build visual horror in beautifully graded interiors prime among them. Her sense of sonic suspense is subtle and fair: when Mia reaches for a glass from a cabinet, you might tense for a sudden loud crash—but first Hadzihalilovic cuts to the hallway exterior, and only then do we hear its fall, suitably muffled but no less tense for that. In a series of shallow-focus, low light opening extreme close-ups, we’re introduced to Albert from overhead and in profile, hands on his forehead; as the furrows become perceptible, it’s like one of Claire Denis’s patented ECUs rethought for anxiety rather than sensuality.

There are some other extraordinary images throughout: a dying woman’s eyes roll back as her eyelids pull back until only her whites stare out; a series of nighttime phantom carriage shots from a train traveling deeper into a foggy night as electric wires become less and less visible in the distance. (The grays and blacks in this are, to put it mildly, not suited for online streaming compression—Hadzihalilovic is in total control of her image and sounds.) Use of music is sparing but includes the oft-played “Earwig’s Cue” (written by Augustin Viard, produced by Nick Cave collaborator Warren Ellis), an ambient earworm I’d like a file of right now. Now 60 and only three features into her career, Hadzihalilovic is one of the very few filmmakers who actually qualifies as “Lynchian,” and I hope she comes back around more often.