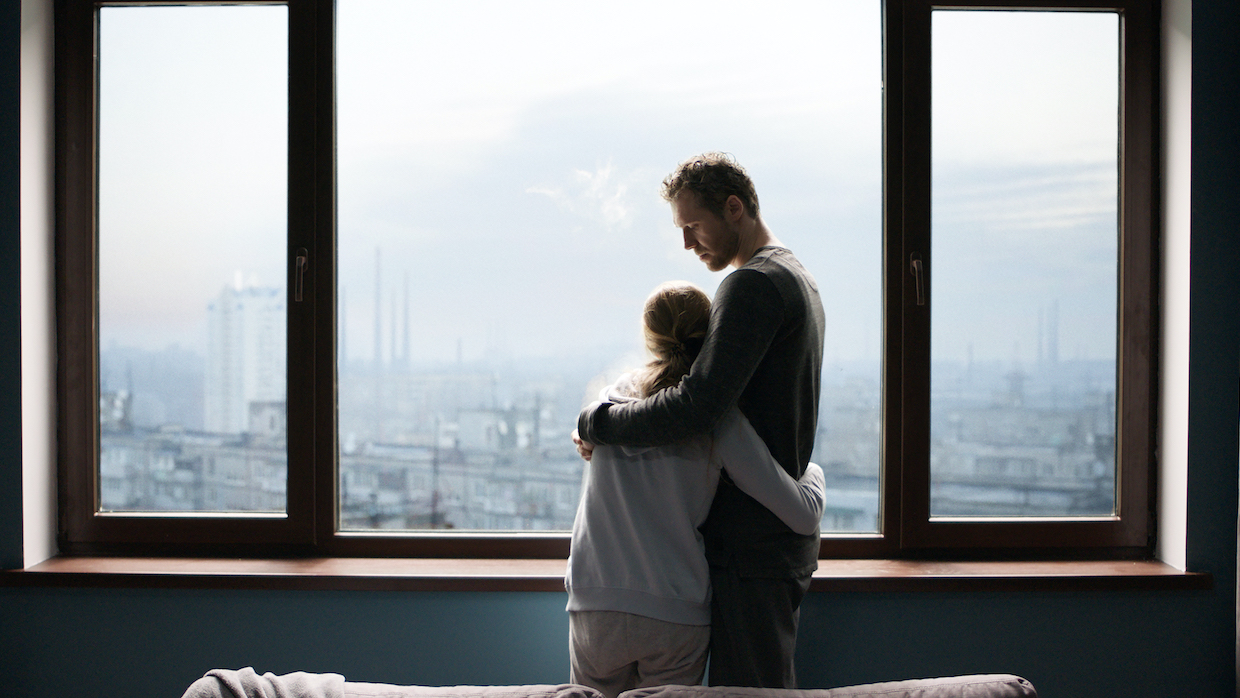 by Giovanni Marchini Camia
in Festivals & Events
on Sep 10, 2021

In a politically loaded gesture, the Venice Film Festival programmed the premieres of Valentyn Vasyanovych’s Reflection and Captain Volkonogov Escaped by Natasha Merkulova and Aleksey Chupov on consecutive days. The former Ukrainian and the latter Russian, both these competition entries contain significant scenes of torture by Russian officers and there’s no misreading the films’ implied message.

Actually, in the case of Reflection, you can hardly speak of implying – films don’t get much blunter. There’s little room for subtlety in the tableau aesthetic that Vasyanovych has now used, with minimal variation, in at least three successive features. Always working as his own DP, he constructs his films almost exclusively with static and imposing widescreen compositions, held for several minutes at a time, within which the characters move as if on a theater stage. (Less favorably, the look often evokes a video game, particularly in the windshield shots from inside a moving car that Vasyanovych is clearly fond of.) Like in Atlantis, winner of the top prize of the Horizons sidebar in 2019, the subject is the still-ongoing Russo-Ukrainian War. That film, sometimes billed as a sci-fi, was set in a post-war near future. Given this speculative dimension, the constantly conspicuous artificiality of the mise en scène served a productive purpose. The same rationale doesn’t apply to Reflection, since the story takes place at the start of the war in 2014, and the exceptionally graphic scenes of violence call the legitimacy of the aesthetic into question.

Take, for instance, Vasyanovych’s choice of when to move the camera for the first time, which happens about a half-hour in and, by finally breaking the oppressive homogeneity of the images, necessarily feels momentous. It’s for a travelling shot that follows the protagonist, a Ukrainian medic captured by Russian soldiers, as he’s dragged from one room to another and subjected to different forms of torture in each. The shot is so long and meticulously choreographed, once I grew numb to the savagery I couldn’t help but wonder how it was rehearsed, the number of takes it required, whether the impressive gore effects were practical or digital, etc.—in other words, a bunch of considerations wholly irrelevant to the reality I was supposed to be thinking about. Halfway through the film, the medic is released and very little happens once he returns home. As suggested by the title, this second uneventful hour, during which the characters discuss topics like death and religion, is meant to inspire reflection on the horrors that preceded it. After getting pummeled with such extreme imagery, it’s a strategy that feels an awful lot like bullying.

Captain Volkonogov Escaped is set further in the past, which is maybe how it managed to receive the backing of the Russian Ministry of Culture, whose logo is the first thing to appear in the opening credits. If more nuanced, Merkulova and Chupov’s image of Russia is no more flattering than Vasyanovych’s. Despite setting the story in 1938 during the Great Purge, the co-directors invite a contemporary reading through obvious anachronisms, such as the striking and entirely unlikely uniforms worn by Captain Volkonogov and his fellow officers. With their shaved heads, bomber jackets and trousers tucked into combat boots, these members of an unspecified unit of the St. Petersburg police are the spitting image of today’s neo-Nazis, while the bright red of their track suits makes for a pointed conflation of ideologies.

In the ravishing prelude, the officers are shown playing volleyball in a sumptuous hall bathed in golden sunlight. The camera circles around the men, admiring their statuesque physiques and their jovial camaraderie to paint an ethereal picture of masculine idyll. This Eden crumbles for Volkonogov once he realizes that his unit is getting purged. He manages to escape and later has a vision of one of his cohorts, who emerges from a mass grave to tell him that they’re all in hell and that he will also end up there unless he manages to find forgiveness for his sins. It’s only gradually, through flashbacks, that we discover that their unit was in charge of torturing and executing civilians on bogus charges of treason. With the authorities chasing after him, Volkonogov goes to find the family members of his victims and begs them to forgive him, getting invariably rejected.

The narrative’s hectic pace, contrived premise and overt Christian symbolism are reminiscent of a Dardennes film, but Merkulova and Chupov keep Volkonogov’s reality ambiguous. There’s the suggestion that he might never have escaped the police headquarters and the repetitive confrontations with the victims’ relatives, who gradually elucidate his guilt and bring him ever closer to genuine repentance, imbue his quest with a mythical quality. By film’s end, as with the Abu Ghraib torturer in Paul Schrader’s The Card Counter, his purgatorial predicament and need for redemption come to represent those of an entire nation.