“…The Parts That Were Left out of the Ken Burns Documentary”: Tom Surgal on the “Historical Corrective” That is His Free Jazz Documentary, Fire Music 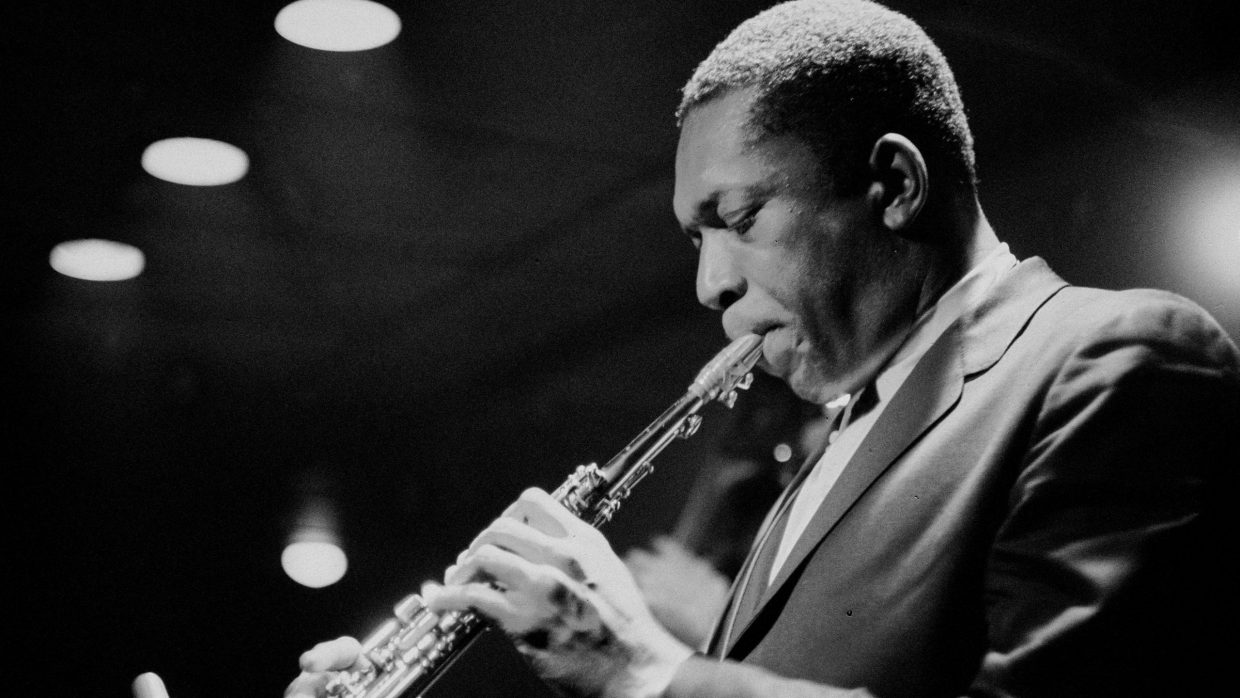 Many years in the making, Fire Music tells the many-stranded story of free jazz, a chronically misunderstood and often maligned expansion of the improvisatory African-American art form that exploded as a movement in the 1960s through the innovations of path-breaking titans like John Coltrane, Ornette Coleman, Cecil Taylor, Albert Ayler and Sun Ra. Although this avant-garde has been around long enough to become its own tradition – its oldest living exponents are in their 90s – the music still remains somehow outside the mainstream. Even this week, Twitter was abuzz over Tonight Show host Jimmy Fallon’s mockery of the German saxophonist Peter Brotzmann, a pioneer of European free improvisation, in a bit called “Do Not Play.” He held up a copy of Brotzmann’s 1969 album Nipples, and then played a snippet from one of the musician’s signature gale-force solos. Times haven’t changed. As the film reports, critics at the time denounced the same records as “washing machine” music.

Filmmaker Tom Surgal’s “cinematic corrective,” which opens today in New York and next Friday in Los Angeles, offers an immersive primer told from the performers’ perspectives. It’s a rich and highly spirited account, driven by candid and extremely “real” interviews with a generational spree of artists, including Carla Bley, Sonny Simmons, Bobby Bradford, Roswell Rudd, Rashied Ali, Noah Howard, Tristan Honsinger, Paul Lytton, Karl Berger and many others, venerated by the form’s devotees if not always well-known to wider circles of listeners. These are intercut with a sometimes dizzying assortment of performance and archival clips, many painstakingly sought out. “Pretty much, if you don’t see it on YouTube it really doesn’t exist,” Surgal says. “I was amazed I was able to uncover what I did, and equally disappointed that I couldn’t come up with more of some artists.”

Surgal has been around the edgier precincts of the film industry since childhood. His father, the screenwriter Alan Surgal, wrote Mickey One, Arthur Penn’s surreal, noirish 1965 film with Warren Beatty as a stand-up comic on the lam. At the other end of the spectrum, Surgal’s mother Florence, now 104 years old, was a pioneering female television producer who first introduced the puppeteer and children’s TV legend Sherry Lewis to the airwaves.

“I was a little kid,” Surgal says. “Just to be on sets was definitely stimulating.” As a teenager, the filmmaker and musician was taken under wing by Brian De Palma. “Everything I’ve ever done in film I’ve learned everything from him,” he says, speaking recently via Zoom from his Tudor City home. “He taught me everything. Location scouting. How to shoot things. How to storyboard. A lot of things that didn’t come into play with this project: how to work with actors, how to cast. He is the primary influence on my cinematic life.”

That life led to art-directed downtown indies like Beth B.’s 1982 Vortex, and directing videos for bands like Pavement, the Blues Explosion and Sonic Youth, whose frontman Thurston Moore is a longtime friend and musical collaborator, and one of the executive producers of Fire Music (along with experimental guitarist Nels Cline of Wilco, among others).

As to what in the music captivated Surgal enough to compel the years of labor behind Fire Music, “that’s the hardest question to answer,” he says. “That’s like asking me what I like about sex. It’s not one thing. It’s highly varied. The free-blowing scene in New York is different from the way it took root in Chicago. The music in Holland was different than Germany was different than England. Throughout stages of my life just discovering that there are so many ways to run with this artistic ethos. It manifests itself in so many beautiful and varied ways.”

Filmmaker: I’ve been hearing about this movie for so long now. Tell me about the odyssey.

Surgal: I’m embarrassed to tell you how long I’ve been toiling at it. A long time. If I had the money, I could jet around the world and do all those interviews in six months. That wasn’t the case. Everyone was far-flung. They were from all over the globe. Fortunately, I lived in New York so everybody comes through at one stage or another and I was able to get them when they did. And I’m glad I did, because as you might have noticed in the “in memoriam” at the end of the movie, 16 of the interview subjects have died since shooting began, so it lends the project a certain gravitas.

Filmmaker: Do you remember what pushed you to start the film?

Surgal: People just started dying and I realized there was a historical void. So many of these guys had never been chronicled, and it was time to put them on film and somehow create a narrative around them. My first interview was [Danish saxophonist] John Tchicai. It was really illuminating and he was a great guy. He was at the top of his musical form. Not everybody was. We’re talking about an older set. He was in his 70s and he was still playing as well as he ever had. It was kind of a shock when he departed [in 2012]. I was glad I could get to him while I still could.

Filmmaker: The heart of the film is those conversations.

Surgal: I know a lot about the subject but most of the work I did was research. I really tried to uncover as much as I humanly could, in order to have an informed interview with these guys and really do them justice.

Surgal: Prince Lasha has got a lot of personality. He didn’t always make a lot of sense, but the few lucid moments he had were total gems.

Filmmaker: What first got you hooked into the music?

Surgal: What got me into jazz is I was listening to this talk show. Rahsaan Roland Kirk was on. This was the era when he was leading the Jazz and People’s Party. They would invade local talk shows, like Merv Griffin and the Mike Douglas show, and interfere with the tapings and demand more jazz on the airwaves. And he just started extolling on the virtues of people like Albert Ayler and Coltrane and Archie Shepp. My 13-year-old mind was stimulated. When I actually secured the records it opened me up to a whole new world of sound and I never looked back.

Surgal: Being in New York City and growing up in an era where they didn’t card you at the door. I was a little older when I went to the jazz lofts. That was a little less formal. There was no two-drink minimum.

Filmmaker: Were people accepting of you being there?

Surgal: I remember being at Studio RivBea [perhaps the most legendary 1970s jazz loft run, by Sam Rivers and his wife Bea]. I haven’t smoked pot in over 30 years, but at the time I was a teenager I was pretty addicted. I was with my best friend and we had a lot of reservations – Studio RivBea is basically Sam Rivers’ living room – and then we [said] fuck it, we’ll light up. Suddenly, Sam Rivers is standing over me and I thought we were being busted and he just asked for a hit. The vibes were great on the jazz loft scene.

Filmmaker: Did you always have the film’s approach in mind: a kind of linear history, filling in the blanks left out by mainstream documentaries? Obviously, there’s Ron Mann (one of Fire Music’s executive producers), whose footage of Cecil Taylor and Bill Dixon is used, and a subset of underground documentaries to tap into.

Surgal: Who’s Crazy?, the Ornette Coleman movie. There’s a Swedish Don Cherry doc I excerpted from. We’re really talking about very little. There hasn’t been a lot of cinematic energy in terms of chronicling this music. That was my real motivation for making the film. … I had a very linear structure in mind. There were some very clear demarcations that I wanted to get to.

Filmmaker: It seems the film also wants to counter perceived notions about avant-garde music. How strongly did that figure in?

Surgal: I half-jokingly refer to the movie as the parts that were left out of the Ken Burns documentary (the 10-part history that ran on PBS in 2001). Twenty hours long, an exhaustive study of the idiom, and about 30 seconds devoted to free jazz. [Former Village Voice jazz critic] Gary Giddins was a talking head in that movie. I always thought he was aligned with the aesthetic put forth in that movie,. I had a friend who was doing sound on a shoot with him and he was talking to him. “Not too much free jazz in that movie.” It turned out Gary was revulsed by that, and he had to implore Ken Burns and Wynton Marsalis just to have the name Ornette Coleman included in the movie. There was a movement afoot, championed by Stanley Crouch and the Marsalis brothers to really denigrate the history of this music, just write it out of history altogether. I’m trying to supply a cinematic corrective to right that wrong.