Wanting Less and Needing More: Minimalism, Maximalism, Ryusuke Hamaguchi and the Rest of 2021 in Film 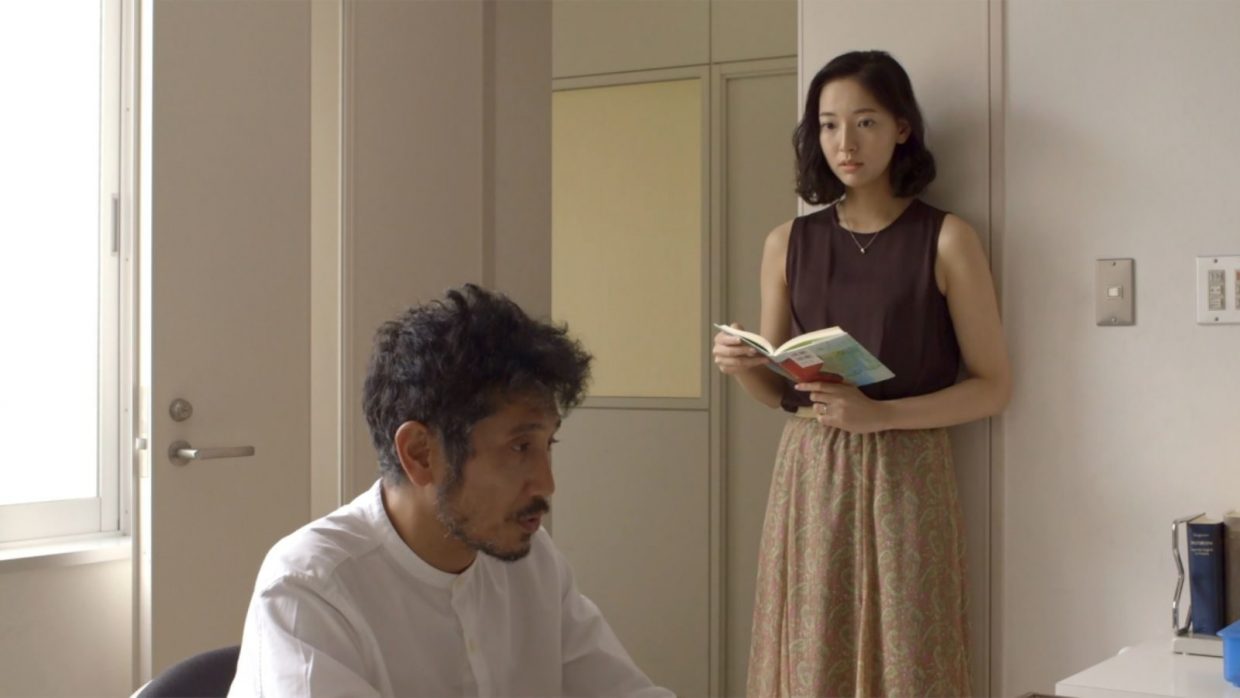 Wheel of Fortune and Fantasy

There is a sign somewhere out in the desert (every designer knows where) like a motel sign, except that instead of “NO VACANCY” it says “SANS SERIF,” and the most important man in America is the man whose sole job is to pull the giant lever that turns “SANS” off or on, which he does once every ten years.

The KonMari craze of the late 2010s, with its flat-pack packaging of deaccumulation into a lifestyle brand, represents the top of the decade-long pendulum arc that swings forever between minimalism and maximalism. When I still took the subway to work every day, every ad looked the same: the product in question, possibly some suitcase from a luggage startup [sic], posed against a whitewashed concrete wall next to a Danish modern standing lamp and a single potted succulent. All the ad copy was in a gothic typeface, even the ad copy for the company called “roman.” It was a minimalist aesthetic for a modular existence, sorted and contained into boxes in boxes and icons on home screens.

A correction to this aesthetic and spiritual trend was inevitable just in, like, a dialectical-materialist sense, even before the lockdown year of 2020, endured in homes that were suddenly far from blank slates, jungles of Amazon boxes and new plants and pent-up feelings. The lever groaned, the neon “SANS” flickered off and we dreamed of 2021, of vaccines and hugs and kisses and going back to the movies.

It didn’t quite work out that way, at least not all at once. Movie attendance is still down, as the virus has lingered alongside a preference for the modular conveniences of set-top boxes. A new decade of social flourishing, and aesthetic flourishes, began emerging only gradually, if distinctly.

The filmmaker of the year, Ryusuke Hamaguchi, whose two rapturously received 2021 releases herald the emergence of our next major auteur, is also the perfect filmmaker for this transitional moment. He’s an authentic minimalist, in the tradition of the artists Kyle Chayka writes about in his book The Longing for Less, who, in contrast to Kondo-lite lifestyle gurus, pare away excess, block out the noise of the world and reveal a core of pure sensation, the “the fundamental miracle of our moment-to-moment encounter with reality, our sense of being itself.” But Hamaguchi’s also a maximalist, with a capacious approach to genre, a vast experiential scope and texture to burn.

In Drive My Car, Hamaguchi reflects on his own methods, as his theater-director protagonist runs lines in his car in slowed-down cadences, and instructs his actors to practice saying the lines without conscious inflection. Hamaguchi does this with his actors as well: Strip away the meaning so it can be built back up, make yourself a perfect human vessel for it.

The locations of Drive My Car are sleek and silvery, cool to the touch, grief-haunted—modernity pushed to the point of absence. Wardrobes are monochrome. His rectilinear framings model the efficiency and freedom-from-encumbrance—the modularity—promised by the merchants of minimalism. Especially in Wheel of Fortune and Fantasy, Hamaguchi breaks space up into neat rectangles; rather than the over-the-shoulder, his preferred setups are the full-profile two-shot, or a direct-to-camera close-up for emphasis, as the characters literally face up to things, and each other, straight-on. The major building block of both Wheel of Fortune and Fantasy and Drive My Car is the monologue, delivered by characters with flattened but captivating affect, in late-night whisky bars or over tea. Listening is the subject of his films as well as their mode: He’s concerned with how to express oneself, onstage or off.

In inviting you to simply sit with another person, Hamaguchi is a breath of fresh air amid polluted discourse. (Wheel of Fortune and Fantasy, with its second and third sequences about human connections respectively twisted out of shape by and freed from the distortions of digital communication technologies, is explicit about this.) His films require our patience, which is different than demanding our attention—though Squid Game, say, is three times as long as Drive My Car, it feels like less of an ask, because it’s just another item in the queue for us to deal with, instantly integrated into an entire workflow of explainer pieces to read at the digital watercooler and handmade Halloween costumes to make after the strained supply chain failed to deliver enough to the shelves in time. Watching Drive My Car and Wheel of Fortune and Fantasy, by contrast, will bring you no closer to meeting your productivity goals—a claim even mindfulness apps make.

But at the same time, Hamaguchi’s narratives use contrivance and ruptures—disappearances, doppelgangers, chance meetings, coincidences, impulsive decisions, natural disasters—to surprise and unlock his characters and ruffle the films’ chic utilitarian elegance. (I’ve taken to calling his style “Uniqlo melodrama” for the way that it harmonizes the formal and emotional satisfactions of minimalism and maximalism.) His films are not “cathartic,” since there’s nothing purgative about their climaxes: all those dialogues and monologues work towards articulation, something spoken into being rather than expressed away. Wheel of Fortune and Fantasy ends with a fanciful bit of role-play that becomes gradually more real, with backstory filled in, memories recalled and feelings finally, movingly embodied. Drive My Car ends with a character previously defined by self-containment now cocooned within the stuff of life, with a new dog and a new car (two Major Life Events to which many people impulsively committed during the pandemic). Characters, having become vessels, end his films fuller than they began them.

Hamaguchi’s films reconcile wanting less and needing more, drives which compete with each other in many of the year’s other key films.

In Dune, Denis Villeneuve’s three-color palette, literally seamless future-tech and KonMari-ed sets—what one wag called “cavernous interiors that look like the biggest and most expensive Apple Store ever built”—made for a negative-space opera, a triumph of upscale, tightly curated design which was profoundly at odds with the actual appeal of the material. The memification of Dune despite its aridity reflects the coming maximalist turn of the 2020s, with audiences ready to embrace—or will into being—a monocultural phenomenon based on a cycle of badly written novels spanning 3,500 pages and 10,000 years of messianic spirituality, Great Powers allegory and planetary ecology involving giant sand worms and telepathic space nuns.

The contradiction at the heart of Dune is, in a way, the explicit subject of The Card Counter, which with its hero compelled equally to wrap furniture in gray sheets and to cover those sheets with blood splatter is another Paul Schrader picture about self-discipline and violence and the superego as substitute teacher haplessly filling in for an absent God, unable to stop the id from pulling on the ego’s pigtails. Most obviously commenting on American foreign policy, The Card Counter is in a zoomed-out sense also a fascinating meta-textual musing on the attention economy that enables it: A film about intrusive thoughts held at bay through stillness and ritual, made by the most epic poster in the history of Facebook.

With its digital grayscale cinematography, El Planeta looks intentional—a tidy and refined aesthetic of necessity, applying the tenets of minimalism to make a virtue out of its limited means. But the year’s best first feature, starring director Amalia Ulman and her real-life mother, otherwise chafes at its own limitations, and their systemic causes. El Planeta, about a mother-daughter team angling for celebrity encounters and for-exposure creative jobs from an apartment they’re about to lose, skewers the new genteel poverty of rent-the-runway and easy credit, and challenges pundits who seek to use obligatory consumption to measure standard of living. In the Eurozone, even poor people have iPhones—even if they can’t afford broadband, and have to steal a neighbor’s Wi-Fi to interview for a gig. Ulman understands conspicuous de-consumption as hypocrisy, and makes the point that real thrift is messy—when you have to make your own clothes, you need lots of fabric swatches lying around. Ulman’s clothes in the film, even the staple pieces that she rewears, are funky, garish, gratuitous, maximalist as the artistic ambitions her character pursues despite the lack of a social safety net.

So the next big movie—a 2021 festival favorite finally seeing release in early 2022, by which point we’ll maybe be ready for it—is The Worst Person in the World, Joachim Trier’s triumphant resumption of the cycle of Oslo films he left off at the start of the sans-serif 2010s, and their big-hearted maximalist swagger. The Worst Person in the World is exultantly, freewheelingly full of gimmicks and digressions, real songs and made-up books, as it stylizes its narrative to match the life-lust of a young woman coming to understand her own personhood as an overwhelming accumulation of thrilling and mutually contradictory urges, and facing the terrifying yet vivifying realization that one life is an impossibly meagre allowance to spend on the abundance of the world.

Thanks to Elena Lazic for her essay about Wheel of Fortune and Fantasy, and Caroline Golum for her conversations about maximalism.