“My Goal for This Film Was to Combine Two Completely Distinct Styles in a Way that Seamlessly Tells the Story”: DP Alan Gwizdowski on Honk For Jesus. Save Your Soul 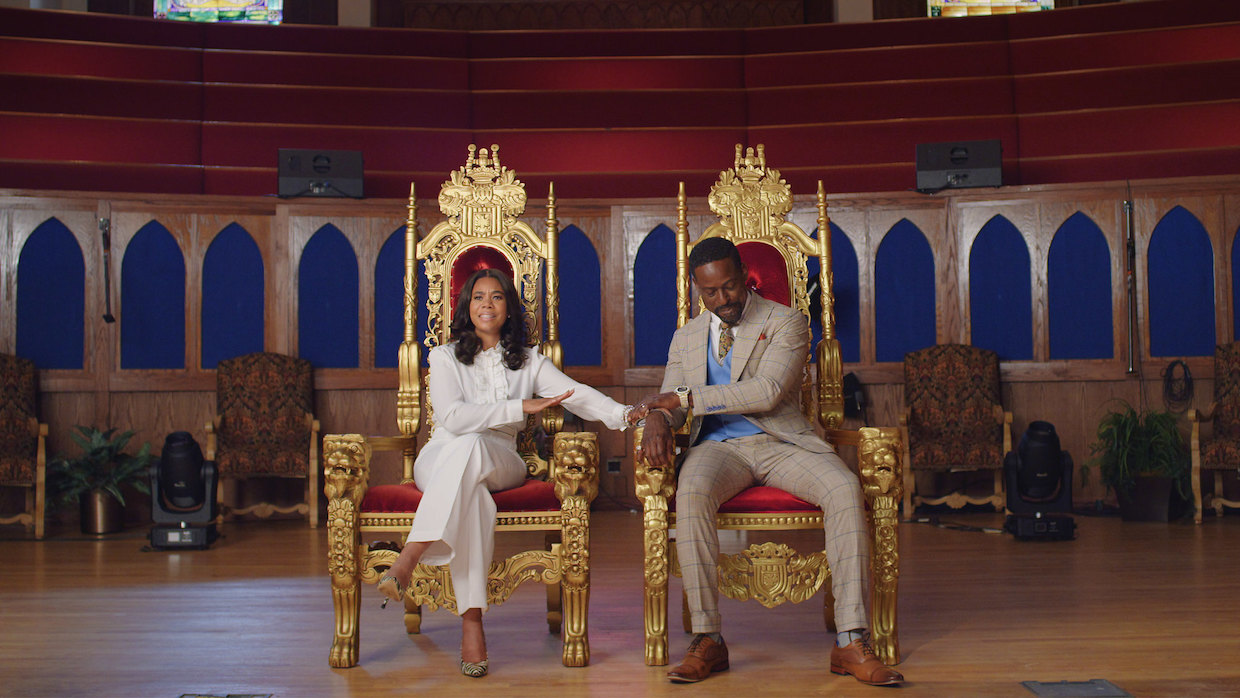 Regina Hall and Sterling K. Brown in Honk For Jesus, Save Your Soul. (photo: Alan Gwizdowski)

In Honk For Jesus. Save Your Soul combines faux-documentary and straightforward cinematic narrative styles to tell the story of a couple attempting to rebuild the congregation at their once-thriving megachurch in the aftermath of a scandal. Cinematographer Alan Gwizdowski discusses how he combined the two styles in a way that was intuitive for the audience while emphasizing the ambiguities of the narrative and the film’s critique of documentary filmmaking.

Gwizdowski: Another cinematographer, Adam Bricker, was actually the original cinematographer slated to shoot this film. He had a scheduling conflict arise prior to the start of filming and had to back out of shooting Honk for Jesus. When Bricker realized he would need to replace himself on this film, he recommended me as the new cinematographer. I operated camera for Adam on several projects, including both seasons of the faux-documentary series American Vandal (Netflix). He knew I would be able to achieve the look and style that Honk for Jesus was calling for: a documentary story mixed with a traditional cinematic narrative. Having shot many real documentaries myself, as well as faux-documentaries, we realized that I am uniquely qualified for the film’s style.

Gwizdowski: My goal for this film was to combine two completely distinct styles—documentary and cinematic—in a way that seamlessly tells the story without confusing the audience. In the film, Trinitie and Lee-Curtis hire a documentary crew to tell their version of the story, but they also have personal interactions that are happening when the documentary cameras stop rolling. These two different styles need to inform the viewer of which version of the story they are seeing at any given moment. Director Adamma Ebo and I crafted a visual language that eventually makes those distinctions a part of the subconscious. By showing the documentary, as well as what’s behind the documentary, we are able to highlight the justices and injustices that can happen in documentary filmmaking: does the documentary tell the full story? The real story? Is the documentarian honest, or do they have ulterior motives? The documentarian in the film, Anita, is a character that you never see on-screen. Her character is played out through the visual style of her film, thus making the camera a representation of her character.

Gwizdowski: The documentary style of the film was influenced by several different docs. The chaotic camera work was influenced by the evangelistic sermons in Marjoe. The follow-doc style, drone footage and B-roll were influences by Weiner and several other true-crime style docs like Making a Murderer and The Jinx. I also employed techniques I’ve learned over the years from my own projects, like Nonsuch, with director Jackson Adams, as well as many faux-doc projects with director Tony Yacenda. For all the archival church footage, we tried to emulate real sermons from megachurch pastors.

The cinematic style was heavily influenced by the Coen brothers’ film No Country for Old Men, as well as long take scenes from Boogie Nights and Birdman.

Gwizdowski: The main creative challenge for me was to distinguish which style, documentary or cinematic, any given scene or shot needed to be. Adamma and I outlined and broke down every scene and designated rules for each style, making sure we didn’t break those rules while shooting unless we intentionally meant to. For documentary scenes, we used handheld camerawork as if it were a two-person camera crew, sit-down interviews with the camera on sticks and documentary b-roll on sliders. For the cinematic narrative, we always gave the camera a smooth move or kept it static, except for three specific scenes where we wanted to blend the styles so the audience would get lost in the performance.

The biggest logistical challenge for me was figuring out how to work with the locations provided in order to sell the coverage for the sidewalk scenes in front of the church. We did not have the ability or means to shut down or control the live traffic on the main road, which meant we couldn’t safely shoot with the camera in the street or from across the street. Anything that is looking back towards the church was shot on a through-street in the church parking lot, which we were able to safely shut down. We still needed to tie Lee-Curtis and Trinitie to the real road with live traffic, so all the angles looking back over their shoulders, with the road in the background, were shot in a completely different spot. Adamma and I designed the shot list based on the strict parameters the location provided, trying to keep the coverage fresh and interesting without repeating the same angles over and over. It was one big puzzle.

Gwizdowski: We shot on two RED Gemini DSMC2 cameras provided by Panavision in Atlanta. The main reason for choosing this camera was for its low-light capabilities; this allowed us to use a polarizer filter in low-light situations without needing to bring in much more light. Most of the interior scenes were shot at ISO1600 with the Gemini’s low-light sensor, occasionally needing to push to 2000 or 2500.

For the archival church footage, we used the in-house Sony Beta-Cam that the church uses for their actual sermon footage. The church provided us with shots of the crowds filling the church, something we would not have been able to shoot ourselves due to COVID-19 restrictions and budget constraints. We used the Beta-Cams to shoot Lee-Curtis on stage, as well as selective audience shots, tying him in with the footage of the crowd from a real sermon.

For the documentary footage, we used spherical lenses. Fujinon Cabrio 19-90 and 85-300 zooms and Panavision Primo-70 Primes. We also used a 40mm E-Series Anamorphic Portrait lens. We cropped the doc footage to a 14:9 aspect ratio to further separate it from the 2.40:1 aspect ratio of the cinematic footage, for which we used Panavision’s beautiful T-Series Anamorphic lenses.

Gwizdowski: I took a very naturalistic approach to the lighting because of the documentary style the film called for. Adamma and I chose to separate the looks through the specific camera motion and lens choices and color grade. When it came to lighting, we wanted to use it as the thread that tied the two styles together. I felt that if we chose to light the cinematic scenes differently than the documentary, in addition to different lenses and camera settings, the cinematic scenes would feel too artificial and not like they were part of the same world. Jeremy Johnson (gaffer) and Michael Sannuti (key grip) did a great job in adding depth while making the light feel as real and natural as possible. For exterior scenes, we would only bounce light or use negative fill, were careful not to overlight, and never used overhead diffusion. For interior scenes, we would light the space and allow room for the actors to play. We tried not to hinder their blocking. I didn’t want to get so detailed in the lighting that the actors had to hit marks for lighting purposes. We also had to light a megachurch on a small budget, so we needed to work with the existing available light. More often than not, we were selectively taking away light and shaping what naturally existed. The interior documentary interviews were the only time we would go for an intentionally artificial “interview style” lighting setup.

Gwizdowski: The climax of the movie was the culmination of all the puzzle pieces we were keeping separate throughout. Not only did the visual language we were creating need to clearly make sense to the viewer, but we now had to mix them seamlessly for this scene. An added layer to this challenge was shooting the scene across two different locations and tying them together as one so that none of the individual elements would distract from the performances.

This scene starts off in the documentary style. We needed to establish where the two documentary cameras would be shooting from, because when it switches to the cinematic style the doc crew members are seen on camera. We started by shooting all the documentary shots facing the church, where we had control of the fake road and could create our own traffic and establish the blocking of the scene. We then moved to the second location to shoot all the doc-style shots facing the real road with live traffic in the background. Once we completed all the doc-style shots, we switched to anamorphic mode for the cinematic shots and continued to shoot out everything facing the real road before moving back over to the original location in the cinematic style to finish the daylight dependent scene. We needed to shoot both styles in two different locations: a total of 32 setups in one day. On top of all that, it was over 95 degrees with clouds moving in and out all day.

Gwizdowski: We employed some show LUTs that I created on set with our DIT, Khiry Morgan. They were based on some LUTs I have used previously and modified on set using Livegrade. But once we got into the DI with colorist Billy Gabor, at Company3, we started fresh and created a new tone. The camera motion and lens choices were the only things baked into the image. My goal shooting on digital cameras with a RAW file format was to shoot with the intention of having as much flexibility in the color grade as possible. Adamma had some great references, and we aimed to separate the two distinct styles as much as possible. We went with a vibrant digital look for the documentary to contrast with a muted, softer feel for the cinematic scenes; both kept a rich skin tone while highlighting the vibrant colors of the church clothes. We intentionally started them off in stark contrast to each other, but started to blend the looks towards the climax before separating them again for the ending.

Film Title: Honk For Jesus. Save Your Soul