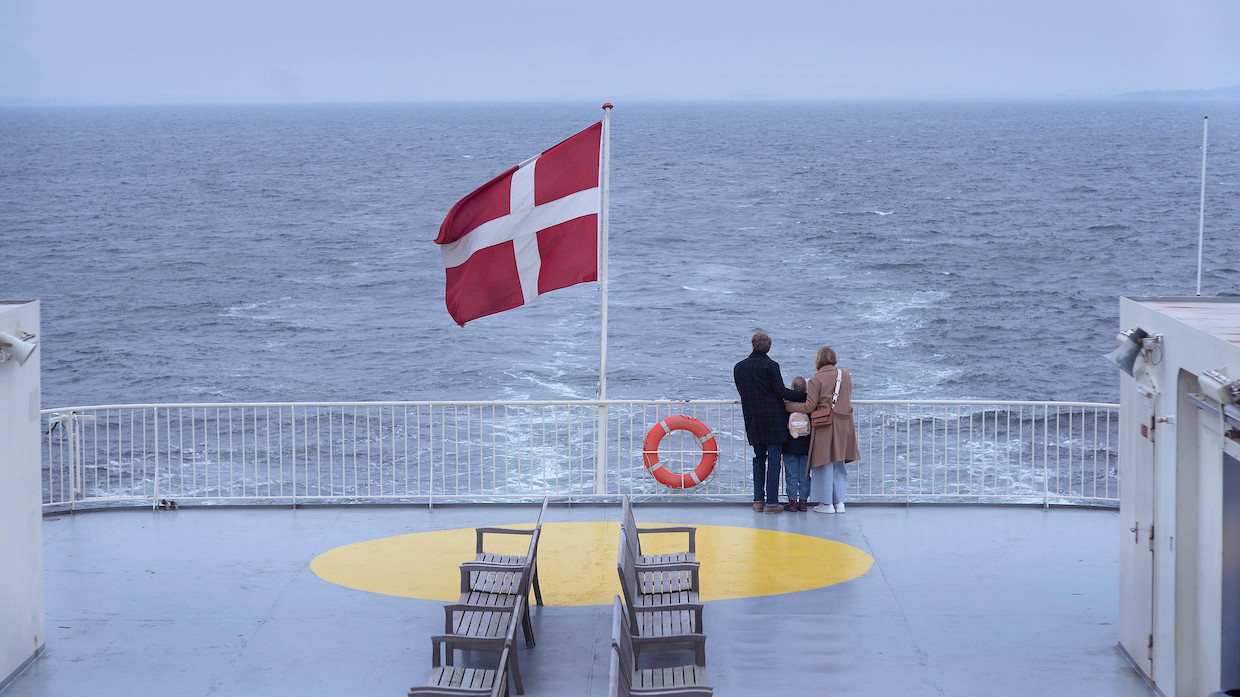 Shudder announced the acquisition of Christian Tafdrup’s Speak No Evil just before the film’s Sundance premiere. It’s probably one of this year’s breakout titles—at any rate, enough people in my Twitter feed recommended it to redirect me from previously planned viewing and Tafdrup’s freshly signed to WME. In his “Meet the Artist” video, the co-writer (with his brother, Mads) and director displays an entertaining flair for hammy hucksterism in an Alfred Hitchcock Presents intro vein. Sitting in front of a fire, he smilingly reads out comments from a test screening (“The director has to be mentally examined”; “A horrible, horrible film”; “This film should be not be recommended to human beings”) before turning direct to the camera with a smirk: “I hope you dare to see our film.”

So, what’s going on in here? Though early reviewers have avoided third-act details (and I’ll follow suit), the title and key art used on the poster—people screaming in evident terror inside a car—indicate a general likelihood all protagonists are unlikely to make it out alive, and certainly not unscathed. Bjørn (Morten Burian), wife Louise (Sidsel Siem Koch) and daughter Agnes (Liva Forsberg) meet a similarly aged family trio—Patrick (Fedja van Huêt), Karin (Karina Smulders) and their unspeaking son Abel (Marius Daslev)—on vacation in Italy. Bjørn’s family are Danish, Patrick’s Dutch, and the two quickly agree their national sensibilities have more in common with each other than they do with their other Scandinavian neighbors, the “boring” and “politically correct” Swedes. (The characters’ nationalities, and hence their need for a lingua franca, also provide an excuse to have most of the film in market-friendly English—smart move!) Back home, Bjørn gets a postcard inviting the family to come visit for a week in Holland, where—based, at the very least, on Sune ‘Køter’ Kølster’s dissonant and admirably bombastic orchestral score, regularly cued from the first shots at belligerent volume—bad things can confidently be expected to happen.

The characters are kind of thin: Bjørn conveys “slightly unfulfilled,” Louise asks him not to swear around the kids, but their listless marriage is a generalized malaise that makes horror movie characters get restless and take stupid chances. But Speak No Evil has more specific fun with, among other things, Patrick’s home in Holland—stuck in some kind of ‘70s interior decoration, all unfortunate brown and anachronistic furniture, a low-grade hilarious setting for a study in increasing discomfort. Whether he’s a careless host or actively tweaking them is at first unclear, though the transgressions inevitably escalate—in one of the film’s rare moments of overt comedy, Patrick shows an unexpected streak of raging national chauvinism in defense of, of all things, Dutch cheeses. Still, it takes Speak No Evil 70 minutes (out of 97) to turn the screws, with everything prior staying in the realm of vaguely uncomfortable or not-quite-explicably threatening. The reveal of the exact threat is done in a way that recalls, precisely, the equivalent revelatory twist in Get Out, but the villainy isn’t surprising.

The eventual destination is two climactic acts of violence—one of which seems inevitable in retrospect, the other providing the film’s especially grim conclusion. This ending is weirdly pretentious, scored to rearranged Monteverdi no less for maximum medieval vibes, and its portent sits weirdly with the unfussy discomfort preceding it. Per Tafdrup, “the premise of the film is that politeness leads you to death,” which would make this a nasty punchline in a black comedy vein. But that potential tone is belied when the end credits roll over what looks like a Renaissance fresco of an angel (!)—this because, Tafdrup says, “We saw the film as an opera, very mythical. Italy is Heaven; Denmark is limbo; and Holland is Hell.” That’s a lot of loftiness to assign something this fundamentally brutish; at the same time, it’s hard to imagine Shudder viewers getting a kick out of something this determinedly withholding. Still, as a change of pace from the Sundance norm, Speak No Evil gets the job done, buoyed in part by the novel cultural politics of its Western European faceoff.

It also made for an inadvertent double-feature on the limits of parental protectiveness with Andrew Semans’s Resurrection. I went into nearly cold on the strength of a few “could work out” factors, most intriguingly the presence of Rebecca Hall (also an executive producer) in a film by previously-unknown-to-me writer-director Andrew Semans, whose bio noted that his first feature “was distributed theatrically by Factory 25”—a microdistributor shoutout I can’t remember seeing before. I was curious what was going on inside a sophomore feature made after a decade’s directorial absence as a scale-up from the obviously microbudget to something well-funded with actual star power. And while it’s hard to tell after one viewing if there’s more to Resurrection than the force of novelty, it was immediately confident enough to hold my attention with no grumbling.

The portentous title, coupled with DP Wyatt Garfield’s restlessly-in-motion camera, seems to initially place the film somewhere in the neighborhood of Jonathan Glazer’s Birth. An alpha businesswoman incongruously located in Albany, Margaret (Hall) strides through her office with total confidence. Her apartment is so big, and the editing and segmentation of it so particular, that at first it seems she lives alone, alternating between drinking beers alone in front of the TV and having her employee/married fuck-buddy Peter (Michael Esper) over for vigorous copulation. But Margaret also has a daughter, Abbie (Grace Kaufman), of whom she’s fiercely over-protective in the final weeks before she heads off for college—and that’s before the sudden reappearance of an especially toxic ex gives her an immediate panic attack. He’s eventually revealed to be played by Tim Roth, and the film understands there are few more terrifying sights than that performer faux-benignly smiling.

At about precisely a third of the way through (act break!), Hall delivers a long, conspicuously virtuosic unbroken monologue in a static shot that eventually, with nearly imperceptible slowness, starts zooming in. This speech outlines a lot of thematic areas that could be plumbed (trauma, parental guilt, abusive relationships)—but its anecdotal details are also slightly deranged, and the person Hall’s talking to is understandably confused and upset: is what she just heard a joke or a test, she asks? Resurrection thus poses two mysteries, one of which is pretty standard—is Margaret crazy about the threat her ex poses, or is she right?—and the other being what this will all add up to metaphorically. In service of those themes, there’s a regrettably corny nightmare dream sequence early on, one of the very few times the film sets a stylistic foot wrong—its achievements include, most impressively, making Albany look dread-suffused and dripping with sinister atmosphere. The dialogue often crackles with misanthropic aggression and latent threats, and the cast is entirely onpoint. (Veteran character actor Rosemary Howard has a hilariously unnerving one-scene part as a hotel desk clerk whose vocal delivery is inexplicably pitched somewhere between Romanian accent and excessive saliva production.) Where it eventually lands is both gonzo and unexpected, hence exhilarating on first pass. What it adds up to is another question—beneath the lurid twists, this is pretty metaphorically direct, and its faux-ambiguous ending actually seems a little too easily resolvable to an accordingly tidy conclusion to me. But Resurrection has stylistic verve, redirection, power imbalance shifts to spare and enough tension to power through to that conclusion regardless of whether or not it’s a novelty.

Audrey Diwan’s second feature, Happening, arrived for its US premiere as the Golden Lion winner at last year’s Venice; of greater interest to me personally, it’s an adaptation of one of the eight Annie Ernaux books I read last year, which is intended not as a brag (they are, mostly, very short) but as an indicator of my investment. From the moment I started her consensus masterpiece, 2008’s The Years, it was clear I wanted as much of her work as I could get, and the brevity of most of her work helped make that happen quickly. The Years work tells the history of France during Ernaux’s lifetime in the first-person plural, thereby re-enfolding the incidents she narrated in the first-person singular in her previous books with much greater context; before that, her work (which includes several volumes of journal entries) overlapped sometimes in subject but never in specific incident, allowing Ernaux to i.e. write two books about her mother (the birth-to-death biography A Woman’s Story and the journal entries about her Alzheimer’s decline in I Remain in Darkness) without ever repeating herself except in broad life arc tracks—let alone without repeating anything in A Man’s Place, her biography of her father. This lack of repetition applies to the abortion described, in pitiless and typically self-indicting terms, in Happening, which she relates primarily in relation to the endless difficulties she had obtaining one while it was still illegal and never mentioned in any volume prior to that. (In 2016’s A Girl’s Story, Ernaux reveals that before the abortion, for several years growing up she never had a period at all.)

The first problem facing an Ernaux adaptor is, inevitably, how and whether to translate or omit her first-person voice. Diwan opts to eliminate interiority entirely: no voiceover, no laid-over journal text, just a present-tense immersion in what it was like to try to get an abortion in 1963 France. Sympathy is instead created via a visual language that’s a less frenzied Rosetta, aligning itself in behind-shoulder handheld when Anne’s in motion or swiveling around her shoulder when others speak in the classroom. Her Ernaux is pre-marriage college student Annie Duchesne (Anamaria Vartolomei)—her maiden name intact while an intense literature major whose sudden discovery of her pregnancy saps away intellectual energy from her studies. Duchesne’s problem is one of execution so she can return to what she’s interested in, never one of fighting an internalized morality.

This adaptation is both very faithful to the book, sticking fairly precisely to its order of incident and staging many of its most unpleasant moments, but is even more on-task and doggedly focused on the material particulars of what it took to circumvent the law to the excision of all other subtexts. Two of the book’s most interesting-to-me scenes are purposefully omitted. In one, a heavily pregnant Anne goes to see Battleship Potemkin and runs out to vomit when maggots are discovered in the food; throughout her books, Ernaux emerges as a formidable cinephile with a wide, compulsive range of references and titles scattered throughout, and her decontextualization of a mandatory-viewing classic is hard to shake. Another scene takes place when Anne has, despite wanting to avoid official medical attentions, wound up in the hospital, where a doctor chides her for not letting staff know she was a university student—the unforgettably ugly lesson she derives from this is that her presumed moral transgression was automatically differently (less severely) weighted for classist reasons, a hard-to-shake discovery.

Diwan’s adaptation enfolds none of this, nor the structuring Catholicism Ernaux grew up under and regularly, angrily cites as a destructive shaping force. (Fans can fill in her psychology and life around the edges: in passing depictions of trips back home, her all-important parents are glimpsed, and in her collegiate intensity there’s a flavor of her work.) This you-are-there approach restores visceral terror and righteous rage in reconstructing a society where abortions were illegal. While the period detail is light—mostly restricted to keeping costumes relatively 20th-century-timeless and a repeatedly revisited phone booth—  Happening unsubtly and successfully acts as a reminder of the importance of abortion rights at a moment when reactionary creeps the world over are pushing back.