“I Came Out of This Process With a Refreshed Perspective on Mortality”: Editors Erin Casper & Jocelyne Chaput on Fire of Love 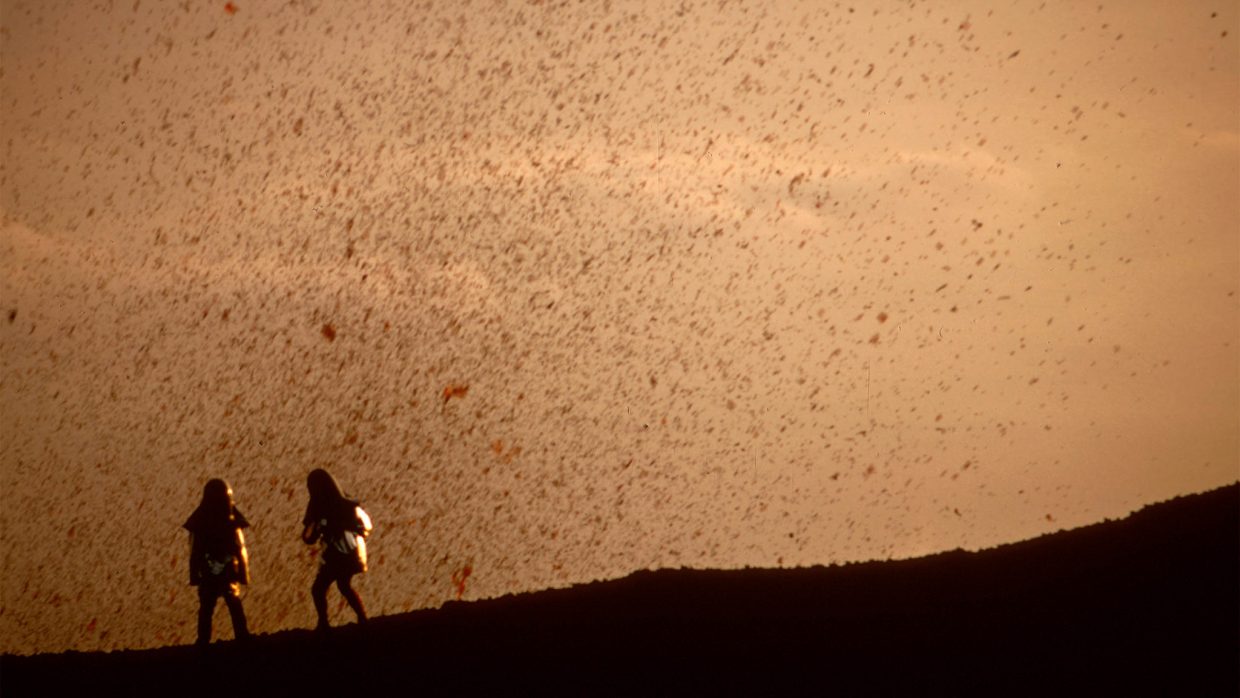 A still from Fire of Love by Sara Dosa

Two of the best known volcanologists, Katia and Maurice Krafft—are arguably as well known for having died in an expedition on Japan’s Mount Unzen, but Fire of Love, a documentary by Sara Dosa that makes use of the footage shot by the couple, turns away from the easy tragic narrative to instead shine a light on the love they shared for their work as well as for each other. Editors Erin Casper and Jocelyne Chaput explain how they put together a film from footage that was often difficult to parse and why they took inspiration from the French New Wave.

Casper & Chaput: We really came together through our director, Sara Dosa, who has an incredible talent for building strong teams with a mix of longtime collaborators and new. When she began to develop the project in 2020, she initially reached out to Erin, who edited both of her previous features—The Seer and the Unseen and the Independent Spirit Award-nominated The Last Season—to start in spring of 2021. In the interim, Jocelyne came on to edit the demo which was an early inspiration for the film’s playful tone. When editing was underway, we initially worked remotely, with Jocelyne in Berkeley and Erin in New York. But in order to stay on track with our ambitious schedule, we eventually took over Sara’s house and set up the edit headquarters there. We also had a clutch editorial team, with our assistant editor Victor Helwani and additional editor Eamonn O’Connor, who helped us meet important deadlines.

Casper & Chaput: Many of our goals derived from the limitations of the footage. On first—or even fifth or sixth—glance, the raw footage doesn’t make a lot of sense. Shot on 16mm, the shooting is very different than in the digital era. The shots are short and precise in order to preserve their precious film stock, but they’re strewn across years of reels, out of order, and have been locked away for decades, and there’s no sync sound to the reels. So, right away we are missing key context. Our main protagonists, Katia and Maurice, are no longer alive to consult about their intention and background on shoots. So a big question surfaced: How do we turn this material into a cogent, compelling narrative infused with a sense of immediacy, as well as an accessible window into volcanology?

Casper & Chaput: It was clear through the Kraffts’ shooting that they had playful sensibilities and didn’t take themselves too seriously. With snapzooms galore, it seemed that they were likely influenced by the French New Wave filmmakers of their day, too. So we ultimately decided to lean into the limitations of the material as playfully as possible since the material seemed to support that approach. It was actually more freeing than trying to do something more traditional because it made the story feel more kinetic and allowed for us to tease out Katia and Maurice’s characters as much as possible. The key was to allow ourselves to experiment a lot, just to figure out the formal (and not so formal) grammar of the film. For example: can we just pause on an image? Can the narrator say something really transparent here, or would that be out of character? Can we embrace splitscreens? How long can a contextual tangent be before we lose the story? Can the music be very conspicuous? Sara was always keen on trying things out and giving us plenty of leeway to do so. Over time, we honed a voice and style that reflected our goals.

In terms of feedback screenings, we were constantly sending Sara and each other scenes and sequences to review. Sometimes we’d determine we needed more fresh eyes and would call upon our larger team. In the later stages we had a few test screenings with small groups. Those were really crucial in revealing to us some pieces that were missing or not fitting.

Casper: I was very lucky to have mentors throughout my career. Jonathan Oppenheim was the editor on my first job out of college, and he became a dear friend whose artful approach was an inspiration for making editing my life’s work. Additionally, finding editing communities through the Karen Schmeer Film Editing Fellowship and the Sundance Edit and Story Labs have been pivotal in renewing my love of editing and maintaining sanity over the years.

Chaput: I got my first editing work thanks to the community I made at the film school I attended (SFU in Vancouver). In terms of developing my sense of story, I’m indebted to my friend Colin Browne, an artist and historian, and to Manfred Becker, the story editor on my second feature. Another influence is my time working on branded films, in particular with the talented filmmakers at Even/Odd Films. The precision—and sometimes boldness—required in this kind of work taught me new techniques and ways of approaching material.

Casper & Chaput: We chose Avid for a few reasons. Chief among them was for its ScriptSync feature, which would allow us to wrangle dozens of interviews given by the Kraffts over their 20+ year careers. Another reason for choosing Avid was that we needed a robust enough editing software to handle large project sizes. We had hundreds of reels of scanned 16mm film from the Kraffts, tons of archives from other sources and a huge music library, plus our edits. We were constantly adding new elements and needed to access all of it within the same project without getting bogged down. Avid’s architecture was also great for sharing edits through bins instead of project files, which was key for remote editing and project management across four cities and two countries.

Casper & Chaput: There was one challenging pair of scenes we came to call “The Elbow.” It’s an interstitial time between expeditions, towards the end of the second act. In our outline it was always intended to be a deeper exploration of the Kraffts as a storytelling couple and as humans who must deal with human things. We kept running up against what we didn’t know about them. They were these adored public figures who made countless media appearances, but very little of their personal life was recorded. We tried some versions that felt too interpreted, too inferred. It doesn’t take much for an edit to sound authoritative, and we kept falling into that trap. In the end we simplified it, inviting the viewer to ask questions alongside us, leaving room for people’s own ideas. It’s not the most bombastic part of the film, but we’d say it’s one of the most porous and inviting ones.

Casper & Chaput: We didn’t have big budget VFX needs. All the explosions in the film are 100% real. We did call upon our fantastic VFX/GFX artist Kara Blake. She designed all the titles and also did some essential VFX work: TV compositions, painting out burned-in chyrons, splitscreen layouts, animating a map sequence, etc. She made sure everything looked polished on the style front.

Chaput: Aside from my new obsession with St. Helens 1980, I came out of this process with a refreshed perspective on mortality, especially as it relates to fear and love. The Kraffts connected some profound dots for me, between mineral and human. In the footage there were “aha” moments where you realize they were trying to demonstrate something very specific, e.g. tapping a thick ash deposit not just because it looked cool but most likely to demonstrate all the gas trapped inside. As I got more familiar with the Kraffts, I also noticed more and more moments that exude their love of life on Earth, e.g. they burned reels of footage on groundhogs. Those groundhogs didn’t make the cut but still revealed something for me. The main change in my understanding of the film: it’s no longer about a couple who died doing what they loved; it’s about a couple who lived doing what they loved. Also it feels more present and contemporary than I expected.

Casper: One really fun but necessary discovery the footage afforded us was the opportunity to become amateur volcanologists. There were a number of deep research rabbit-holes that would always spark a new understanding of the footage upon revisitation. Sometimes it was something as simple as a shot that visualizes how the earth’s tectonic plates worked that would demystify how the earth moves beneath us. It made the process akin to an Easter egg hunt, and those were some of the most rewarding moments because it made for more detailed editing and richer storytelling. Ultimately, I came away from the process reflecting anew on what it means to live a meaningful life. Maurice and Katia’s lasting impact is their love and commitment to traveling to the ends of the earth and bringing back treasures to share with us: dynamic images that helped unlock the secrets to how the earth works. Their legacy was also in the quality of the years they had with each other, their colleagues, their audiences and the people they met around the world. It was time well spent.