“It Was So Physically Demanding That It Almost Killed the Three of Us”: DP Aaron Moorhead on Something in the Dirt 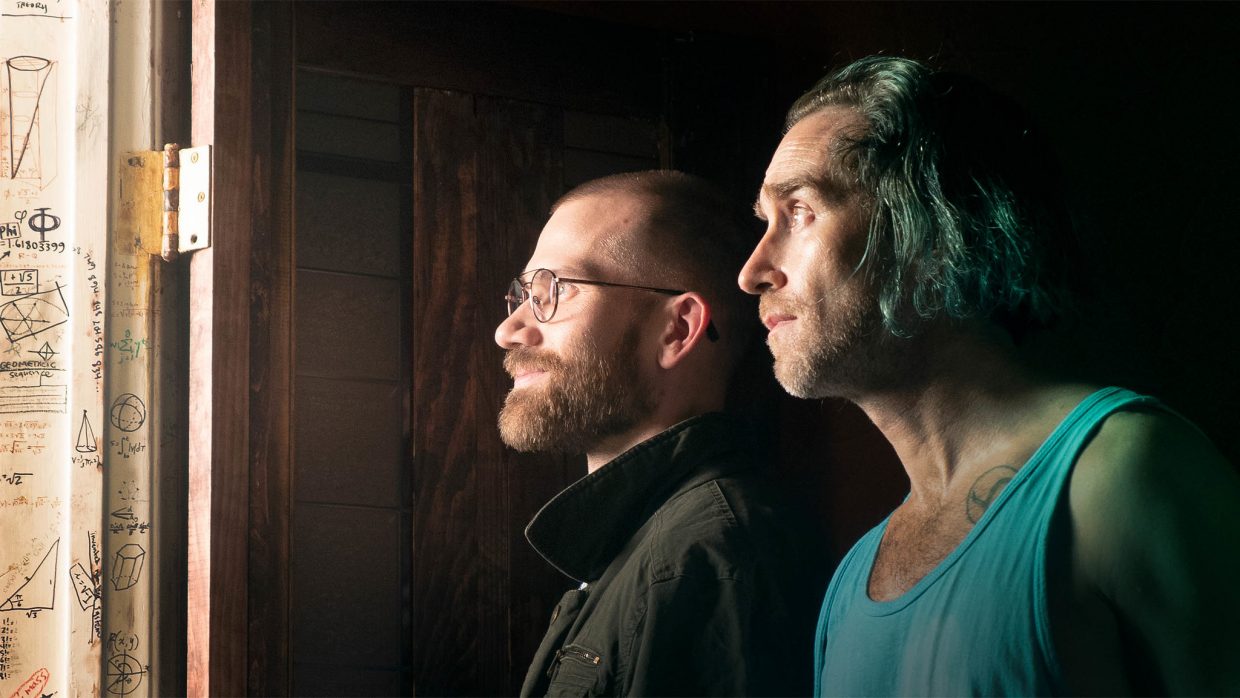 Something in the Dirt is the fifth film that Justin Benson and Aaron Moorhead have directed together, but this one is paradoxically the most ambitious and the most intimate. Shot during the COVID pandemic, it by necessity made almost entirely by Benson and Moorhead, as well as their producer, David Lawson, and a production designer, Ariel Vida. Below, Moorhead discusses how they incorporated the isolation mandated by COVID into the film and disguised the conditions of the shoot with a bit of movie magic.

Moorhead: Justin Benson (my co-director, writer, captain, guru and best friend) and I have made five independent features over the last decade, with me also filling in as the cinematographer. It’s become engrained in our process. It even feels a bit strange to claim the DP title on this film or any other, because perhaps a better way to think of the whole of what we do is toss it all under the umbrella term “filmmaking.” Along with our producer David Lawson and our production designer Ariel Vida, we do whatever we have to do to make the film, and in practice, we’re equally responsible for the visual language of our film. As such, although I’m the one writing this, you can assume Justin and I are both speaking for the film here.

Moorhead: We wanted to make something with just the three of us and a remote art team led by Ariel while in full quarantine in our apartments—without anyone being able to tell. We didn’t want the movie to feel small, and in some ways it has the grandest scope of anything we’ve done so far. We needed it to be a story we would want to tell even if there weren’t a pandemic causing our in-person cast and crew to be just ourselves.

So since we were also the lead characters of the film, when one of us was on the camera, the other was operating it. We gave our characters their own cameras as well, and the way they present the other character on their camera reflected how they were feeling about them at the time. For example, Justin’s character composes shots closer and closer to my face as the film goes on. My character carelessly puts him in bad composition, sometimes just cutting his head off of the frame.

There was a practicality that ended up informing some of the operating of the camera as well. Most of the time, we were performing against an empty spot on a wall—the other character was operating the camera, muttering their lines quietly to not shake the frame. Rehearsal helped with this. Since the pandemic afforded infinite time together, we rehearsed it like crazy, as we do on all our films.

We both lost a lot of weight and muscle for our respective roles. We were not strong, but still performing very physical jobs rigging our lighting and operating the camera handheld. Thus, working and performing all day was so physically demanding, that for particularly long scenes where we wanted to fixate on our performances, we’d put the cameras on a tripod so we could be more present for the other performer. We intended to add handheld to those scenes in post, but ended up falling in love with the heavier, longer scenes being so deliberate and still, so we nixed the idea.

Moorhead: We liked the proscenium and presentation of Errol Morris docs (American Dharma, Tabloid, Rules of Engagement, The Unknown Known… actually, we watched all of them), Nightcrawler’s incredible LA night work, Honey Boy’s color and lighting palette, the sky color of The Beach Bum, the labyrinthine design of the book House of Leaves, the loose naturalism of Blue Ruin, and essentially anything Soderbergh ever does informs our camerawork on a philosophical level.

Moorhead: The lack of a traditional crew was so physically demanding that it almost killed the three of us, although it left a big smile on our exhausted faces every night. We practiced something we called “The Process,” which was a long and careful cadence we’d go through at the beginning of every scene and before every shot just to make sure we didn’t gloss over anything important (continuity, wardrobe, etc). On the camera and lighting side, we were quickly a well-oiled machine with lens swaps, light tweaks, etc. and Justin & Dave were a perfect technical crew. But it was just the gargantuan amount of minutiae that we were directly responsible for that posed the greatest challenge, any one of which was poised to ruin a scene if ignored.

Moorhead: We shot primarily on the Red Monstro VV with the CP2s. A friend of ours (and a great DP in his own right, Evan Zissimopulos) owned all the equipment, and we loved using the Monstro on our last film, Synchronic, so we saw no reason to change. We do heavy VFX and reframing, so that 8K was a delight.

Our characters also have their own cameras, which are the DVX-100 (for a character who has no idea that a 20-year-old standard def camera doesn’t look great) and a Panasonic GH4 (for a character who is a wedding photographer that uses his DSLR for video too). The film’s got some mixed-media documentary-style elements, so we also have bits and bobs shot on iPhone, on a knockoff GoPro (a “FauxPro”), and a $25 security camera from Amazon called a Wyzecam.

Moorhead: For dialogue scenes, we like to turn around fast. So in general the lighting was sketched out far in advance on a floorplan so we could have shapely, controlled light from above at night or from a large diffuse window during the day. Each source was slightly different colors to give us some free color contrast (thanks to Astera and Helios tubes). Same with haze—we had a haze machine running all the time, so we’d get that great separation without having to empty our truck of all its lights & flags to carve out contrast.

There are a ton of light gags in the film, often operated by our hapless producer and only other in-person crew member, David Lawson. Also, we asked our production designer, Ariel Vida, to paint the walls of the apartment darker, bolder colors so the light would stay controlled and purposeful even when we’re moving quickly.

Moorhead: There’s an 8-page scene that takes place at Halloween with a hundred million light gags, props, special and visual FX, blocking goes all over the room—and it had to be shot after nightfall but before midnight because our poor neighbors were waiting for us to finish so they could sleep. When we were done with that scene, I’ll be honest, I wanted nothing to do with it. Now it’s among my favorites and is a crux of the film.

Moorhead: We shot with a standard Rec709 LUT, so the dailies don’t look like anything special. We colored the film ourselves after a crash course in Resolve (I was a colorist once upon a time, but haven’t colored a film in a decade). Although Something in the Dirt now looks more polished than the dailies, we agreed we weren’t ever changing the scene’s original intention. We weren’t going to make a cool scene warm, or a bright scene dark, or a green light blue. We’d fallen into that trap before and we think the audience can smell the artifice. We avoided power windows—but not entirely—and anything else that could subconsciously clue the audience in to the fact that the image has been manipulated in the grade. Also, the Red and CP2s are so crisp and sharp, but the film feels a bit softer and emotionally warmer than something that clinical, so we used the Dehancer plugin (and we totally love it).