“By Limiting the Toolset We Were Ultimately Enhancing the Protagonist’s Point of View”: DP Antti Savolainen on The Mission 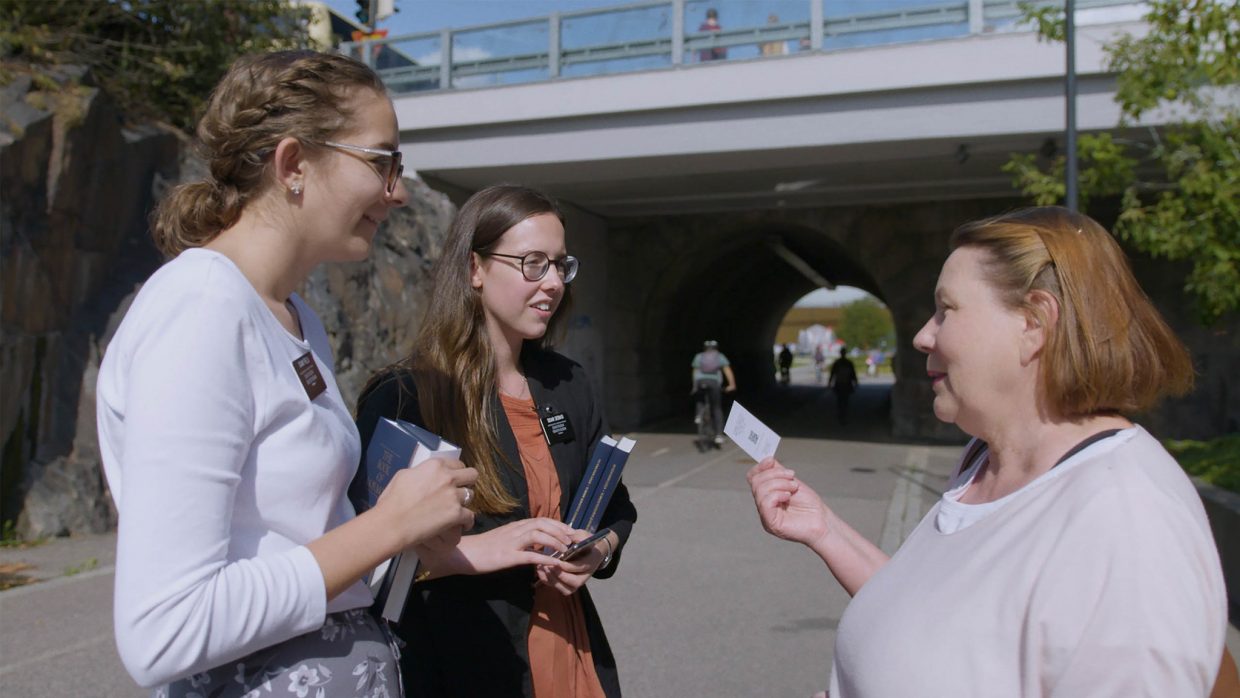 For her first feature documentary, Tania Anderson became the first filmmaker to receive approval to film Mormon missionaries. The Mission brings viewers along with four American teens as they make contact and proselytize in Finland, reflecting on their work, themselves and the world in the process. DP Antti Savolainen explains his unusual lens choice for the documentary and why intentionally limiting his options was in service of the film.

Savolainen: For me it started from an exciting text message from Tania, whom I hadn’t met before, asking if I’d be available for a two-week documentary shoot in Utah and Idaho on the subject of young missionaries of the LDS church coming to Finland, and of course there was no way I wasn’t going to say yes immediately. At that time Tania had put together a short demo following two elders over one day in Helsinki, which was remarkable and made me even more excited. I had worked with the producers before, and I think me having some background with vérité and being a hard worker were the main factors in getting hired.

Savolainen: Heading to meet and film our protagonists on their last few days with their families before becoming missionaries, we knew that our starting point and the most effective approach stylistically and practically would be to film handheld. The fact that they were about to embark on a journey. and the tangible excitement around it all, gave clear motivation for the camera and effectively a natural point of view for the film. Concerning the look and lens choice, over the first few days of filming I had used a zoom, but was always gravitating towards a 24mm, which I eventually used as a prime. It’s a bit of an unusual method in the genre, and for good reasons, but I felt by limiting the toolset we were ultimately enhancing the protagonist’s point of view and ended up building a more coherent style to the film.

Savolainen: It’s tough to say because I’ve always been a big film buff and I’ll watch almost anything, but in terms of cinematography in a documentary, the vigorous and precise handheld work in Waiting for Barcelona was very influential. Then there’s films like Kes, Fish Tank and The Rider, which are inspiring in their naturalism and their use of a simple set of tools in telling a human story, which was very much the case also in our film. Other ones I also have to mention are The Idle Ones and Vacuum-Cleaner Salesmen which are two of my favorite observational documentaries out of Finland and big influences in general.

Savolainen: Walking with the missionaries, we often did really long takes, which was of course part of the process of arriving at the scene but physically strenuous and required a lot of focus, especially when we frequently had to be walking backwards. And to get more intimacy with the 24mm means that you have to be physically close, too. It was all one great and exciting challenge, and luckily I had the best grip I could ask for, which was the director.

Savolainen: For the beginning parts in the US, I used Blackmagic Pocket Cinema 4K and then switched to Sony FS7 in Finland. We wanted physical closeness with the camera and on a Super 35 sensor it seemed like the 24mm was the ideal focal length—able to quickly change shot sizes, not creating much facial distortion in closeups and still having some background separation in wider shots. Besides a few scenes at a church where we had to use a zoom, I used Sigma’s 24mm f/1.4 ART, primarily because of its light weight, pleasing overall aesthetic and sharpness on a Super 35 sensor while mostly shooting at f/2.8. Of course, using a prime lens wasn’t the most convenient solution and meant that you had to pick your moments of moving in on a closeup carefully.

Savolainen: It was mostly always working with available light. There were a couple times when we were losing light during an indoor scene and had to compensate for it with a small LED panel, and another one in a car at night where we simulated street lights going by.

Savolainen: Filming the most obvious proved to be the most challenging—contacting work on the streets. Not because we wanted to do it somehow differently, but because we just couldn’t find an easy way. We tried different techniques like filming from afar at first and picking up sound with the lavs only, but again it was the protagonist’s point of view we were after so we had to be up close with them. Then there was the problem that people were either naturally curious to question what we were filming—not good for our purposes—or because they didn’t want to be filmed in the first place and just quietly continued walking. These moments were of course tough yet important to capture, but luckily—as Finns are a bit reserved folk anyway—the rejections weren’t all because of the camera. Filming their door to door work proposed similar problems, like how to get things authentically, but regardless of the difficulties we still managed to get plenty of interesting encounters for the film.

Savolainen: The film is a German co-production, which also meant that a part the post-production work was done in Hamburg. Before me and the director started to work with the colorist I had prepared and sent a set of LUTs and instructions as an overall starting point for the colorist, which we then worked on in more detail and usually came up with fresh ideas how to make it better. As this was my first feature film and I usually had done my own grading, it was a fantastic experience and I learned a lot from it.