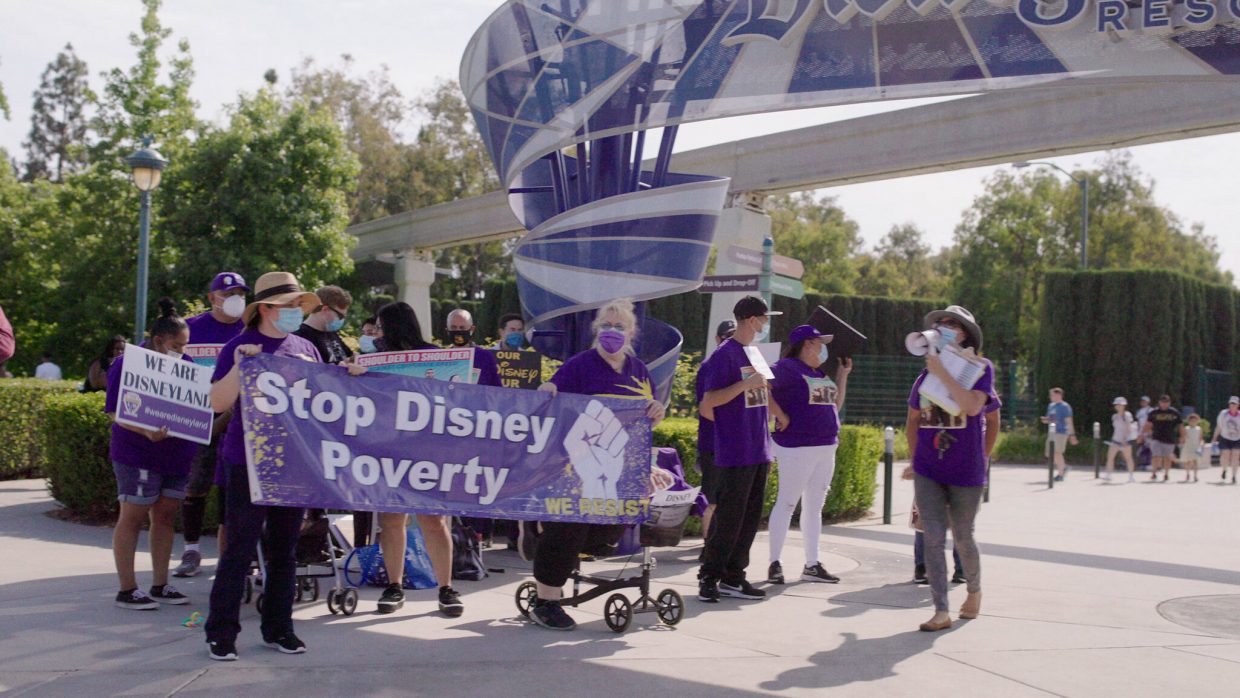 Still from The American Dream and Other Fairy Tales

Disney: Early in the pandemic, I descended pretty quickly into an identity crisis as a filmmaker. I wondered what would happen to film when it can only be experienced in inferior environments, on inferior equipment, and subject to the interruptions and distractions otherwise rare in a theatrical setting.

When I talk to people about the power of film, I often invoke the idea that the darkened room and the rapt audience are a kind of magic that leaves the viewer more open to new ideas and feelings than at any other time in their lives. And because I make documentary films meant to introduce new concepts and ways of thinking to audiences, the idea of having to let go of that “magic” was devastating for me.

But one soldiers on. After a dark period of despair in the early days of the pandemic, I began to notice that documentary content seemed to be getting more—not less—attention in a hyper crowded streaming landscape, and I allowed a little glimmer of hope to slip in.

So much of how I imagined this pandemic playing out has proven to not only be wrong, but the opposite of correct. It is true that our capacity to gather in the dark to watch the magic unfold remains a problem—and Sundance’s move to an online festival broke a lot of hearts, not just my own. But somehow, we in the documentary community are getting seen more—not less—broadly by larger and more unexpected audiences. I’m delighted to have been wrong. As it turns out, once you eliminate barriers like getting to a festival or coughing up $20+ for a movie, documentaries seem to have overcome their “eat your broccoli” image for the general public. What has resulted is what TIME Magazine has called a “documentary renaissance.”

Sometimes being wrong is delightful. I will miss sitting with an audience when our film premieres in a couple of weeks. It is painful to imagine. But if what I trade for that personal pleasure is a chance to make a genuine public difference, I will take that deal any time.

I started the pandemic in a state of despair, and yet I sit here riding out omicron, like everyone else, unsure of what is next but nevertheless recommitting to the idea that what we do as filmmakers is as important as it gets. Here is hoping our audiences—in whatever form—continue to grow and respond to the work that we do.

Hughes: These past two years have brought challenges to filmmaking that I, for one, could never have imagined before the pandemic struck. Shooting and editing remotely? What? Zoom interviews? No way!

But, like everyone else, my colleagues and I pivoted and adjusted. Before long we were setting up interviews with people on the other side of the country from our bedrooms and, in at least once instance, a camper van. Soon the “COVID Coordinator” became an essential team member.

Still, as we soldiered on, I also came to believe that there is at least one thing fundamental to the creative process for which there really is no good technical work-around: in-person collaboration. That’s true in the field, and especially true in the editing room. The precious months that Abigail Disney and I were able to work with our editor, David Cohen, in the same room made a huge difference to the project.

We got lucky with the timing. Vaccinated, we three were able to safely gather at Fork Films last summer in front of the same monitor. Without all the attendant delays and miscommunication caused by emails, texts, slack exchanges and Zoom calls, ideas sparked. They were better ideas. With real-time creative conversation, we puzzled our way through complicated storylines as the documentary’s narrative slowly took shape. I do not believe we would have finished in time for me to be writing this now had we remained in separate rooms.

I’ve heard it said that some day, in the not-too-distant future, we may actually be able to hologram ourselves into the same edit room. That sounds kind of awesome, but if I’ve learned nothing else in the past few filmmaking years, it’s that I still prefer to be in the room (and on shoots) for real!