“I Believe that Valuing African Audiences Will Break the Pattern of Cliches That We Have Become Accustomed To”: Akuol de Mabior on Her Berlinale-Debuting doc No Simple Way Home 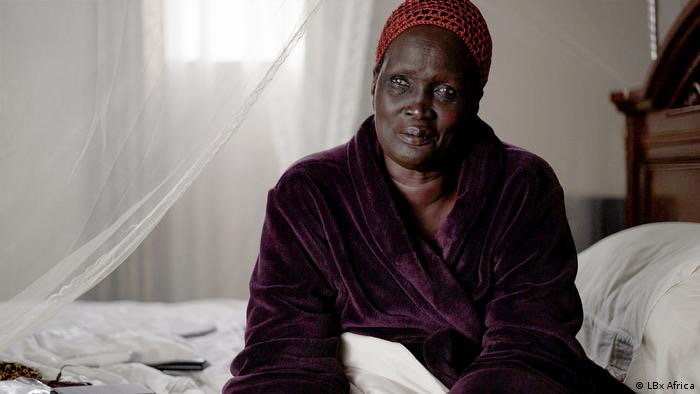 by Lauren Wissot
in Directors, Interviews
on Feb 18, 2022

South Sudanese director Akuol de Mabior’s No Simple Way Home is a gorgeous example of what African filmmakers can accomplish if Westerners would just get out of their way. A world premiere in the Panorama section of this year’s Berlinale, the doc is produced by Kenyan filmmaker Sam Soko (Softie) and the South African duo Tiny Mungwe and Don Edkins of STEPS (Social Transformation and Empowerment Projects) as part of the organization’s Generation Africa initiative, “a pan-African anthology of 25 documentary films from 16 countries in Africa, on the topic of migration.” And it tells a tale not of folks fleeing to the mythic “promised lands” of the colonizers, but defiantly staying put on their own continent to right the fallout from historical wrongs at home.

Luckily for de Mabior, the very embodiment of taking the power back for the people resides literally in her home – as her mother is Rebecca Nyandeng de Mabior, who also happens to be “the mother of South Sudan.” The director herself was forced into exile as a teenager in 2005, soon after her father, the rebel leader-turned-politician John Garang de Mabior, died in a helicopter crash (three weeks after becoming First Vice President of Sudan). And now after years of grueling conflict, South Sudanese independence (in 2011), and a fragile peace agreement, the mother – and current Vice President of South Sudan – and her now adult daughters have returned with nervous high hopes. Along with the filmmaker sibling’s camera in tow.

Filmmaker reached out to the Havana-born, Nairobi-residing, first-time-feature director a week prior to her doc’s Berlinale debut to learn all about this most unusual family movie.

Filmmaker: It struck me that this is a thoroughly feminist as well as African project. So how did working with an all-African, all-female cast of characters and crew affect production and the film itself?

De Mabior: The most significant advantage of working with a crew of African women was how comfortable my mother was with us in her bedroom. I don’t think we would have managed the level of intimacy that we achieved any other way. She was comfortable with (DP) Emma Nzioka and (location sound recordist) Josephine Obudo being in her private space, and even remarked that we were all like her daughters.

Filmmaker: Though your mother does seem incredibly supportive and open in front of the lens, I’m guessing that her precarious political position in South Sudan might also have made her quite cautious. Was she always onboard with participating? Did she set limits on when and where she could be filmed?

De Mabior: My mother has been the most onboard. She didn’t ask to see any footage at any point. I only showed her the film a few weeks ago, with just my sisters and her in the room. She trusted me and has a deep commitment to the truth. I knew this from the start but know it more now at the end of it all.

Filmmaker: So what was it like working with your producers Sam Soko (Softie), and Tiny Mungwe and Don Edkins of STEPS (Social Transformation and Empowerment Projects)? How involved were they?

De Mabior: It has been a massive privilege and a pleasure to work with Soko, Don and Tiny. Soko and I have worked very closely together. I’d say he’s my filmmaking confidante. I wouldn’t have made it through without him. He’s a brilliant storyteller and film editor, and I’ve leaned on his talent and experience many times throughout this journey. He’s also been the most unwavering in his confidence in the story, right from the start up to the very end. I’ve learned a lot from him.

I am constantly in awe of Don and Tiny, as well as the STEPS team behind the Generation Africa project. They have created a beautiful network of African filmmakers. They have been there every step of the way for over 20 teams of filmmakers from across the continent. The first few films released from the collection have had really encouraging success.

Filmmaker: At one point in the film you note the frequency with which you were kicked out of political meetings. Which made me wonder if being the daughter of the “mother of the country” was a positive or a negative in terms of access. How did the camera’s presence influence the situations you were filming (and vice-versa)?

De Mabior: Whether we were filming high-level meetings in government buildings or in the streets of Juba, we had to negotiate. There is a general suspicion of the camera, which I understand and respect. South Sudan, in the media, is presented as a country of chaos and despair. This is, unfortunately, a big part of our story, but it’s not the whole story.

We’ve had to make our case to the people we wish to film, to convince them that we mean no harm. We were not always successful. But I value all those engagements nonetheless.

Filmmaker: As an American I always find it refreshing to watch a doc that avoids all our usual condescending, developing country cliches. With No Simple Way Home you present something of an anti-Western narrative, one in which folks are adamantly not fleeing to the “promised lands” of Europe and the US, but instead fighting to return home and to stay. Obviously STEPS is determined to champion these stories, but how do European funders generally react?

De Mabior: Our fundraising experience has largely been positive. I am told that this is not the norm. I believe that valuing African audiences will break the pattern of cliches that we have become accustomed to. These cliches present Africa and African people as one thing or another. Early responses to the film from African people suggest that we are yearning for stories that don’t focus on the extremes – the one thing or another – but on the complexity in the middle.