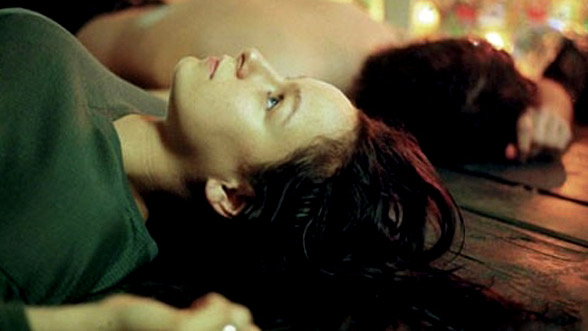 In the 1940s, actress Ida Lupino was one of Warner Bros.’ most reliable contract players, a performer who exuded a tough intelligence in terse genre movies like High Sierra and They Drive by Night. As independent-minded as her characters, Lupino irritated the front office with her refusal to accept sub-par roles and was eventually fired, a development that might not have been great for her bank account but which instigated her most fertile period as an artist. Instead of waiting for the phone to ring, Lupino formed an independent production company and began directing her own pictures, some of which are now classics (The Hitch-hiker, The Bigamist) and all of which scrupulously avoid the unconventional in both their subject matter and aesthetics. Outrage, which Lupino directed in 1950, is a case in point. A relentless look at the ways in which a victim of rape continues to be punished for months after her attack – by the legal system, by societal prejudices, by her own psyche – it’s a groundbreaking character study that looks forward to better known films like The Accused and Promising Young Woman. If Outrage lacks those movies’ polish (Lupino was working on extremely low budgets, even for the era), it also turns its limitations of scale into advantages, burrowing into the subjective experience of its heroine with a stripped-down style that’s particularly effective when it comes to expressionistic sound design (it’s not surprising that Martin Scorsese has referenced Outrage as an influence). Lupino is one of the least sentimental filmmakers of her era, and her straightforward honesty makes Outrage a timeless piece of work that sadly has been difficult to see in recent years. That situation has been rectified with an excellent new Blu-ray from Imprint that boasts a new transfer taken from the original negative and a brilliant audio commentary by film scholar Alexandra Heller-Nicholas that places Lupino’s treatment of sexual assault in a variety of psychological, sociological, and cinematic contexts. Heller-Nicholas literally wrote the book on this topic – her Rape-Revenge Films: A Critical Study is an essential text that belongs on any self-respecting cinephile’s shelf – and her commentary illuminates an indispensable film from an extremely important director.

Heller-Nicholas also contributes a commentary (with fellow film historian Josh Nelson) to another highly recommended new release, Fun City’s Blu-ray debut of Lynne Ramsay’s Morvern Callar. Anchored by a fascinating and enigmatic Samantha Morton performance, it’s one of Ramsay’s elliptical, suggestive dramas that skirts the edges of genre but remains nearly uncategorizable due to its willful rejection of the traditional signposts movies use to tell us what we should be thinking and feeling at any given moment. Morton’s title character is a grocery clerk with limited options and limited interests who reacts in some very odd ways when she finds her boyfriend’s dead body following his suicide: she leaves the body on the floor for days, going out with friends as usual and telling no one what has happened. When she finally does take action it’s to cut the body up and dispose of it with what seems like total detachment; she also decides to pass off his recently completed novel as her own and takes money out of his bank account for an impromptu holiday. Although the book on which Morvern Callar is based tells the story via first-person narration, Ramsay doesn’t rely on the obvious tool of voice-over to explain Morvern’s actions; instead she takes both a more effective and more radical approach to the material, finding corollaries for the novelist’s prose in gestures, light, color, and editing. The clues to Morvern’s behavior – many of which are connected to the film’s sophisticated exploration of class – are there if you look closely, and reveal themselves more clearly on repeat viewings, which Fun City’s stunning transfer encourages. In addition to the Heller-Nicholas/Nelson commentary that examines the film’s unusual manner of addressing trauma (it would make an interesting double feature with Outrage), the disc includes an instructive visual essay by Chris O’Neill and an accompanying booklet with insightful new pieces by film scholars K.J. Relth-Miller and Margaret Barton-Fumo. It’s one of the best releases yet from one of my favorite boutique Blu-ray labels.

My final recommendation this week is a superb special edition of the Andy Kaufman bio-pic Man on the Moon, new on Blu-ray from Kino Lorber. Originally released as a Christmas event picture in 1999, Man on the Moon was an easy movie to take for granted given the abundance of high-wire masterpieces that the American film industry seemed to be cranking out on a weekly basis that year – Eyes Wide Shut, Magnolia, The Limey, Fight Club, Being John Malkovich, Election, Boys Don’t Cry, The Straight Story, The Sixth Sense, Bringing Out the Dead, The Matrix, and Three Kings are just a random sampling off the top of my head. (I remember Entertainment Weekly running a cover story on 1999 calling it “The Year That Changed Movies,” but 23 years later it’s clear that we were living through the end of something, not the beginning.) Man on the Moon begins with an end credits sequence, then adopts an experimental structure analogous to the performance art comedy routines of its lead character, and ultimately leaves that central figure a greater mystery at the end than at the beginning; it’s a far bolder and more challenging bio-pic than director Milos Forman and screenwriting team Scott Alexander and Larry Karaszewski’s earlier whack at the genre, The People vs. Larry Flynt. That film was a masterful example of the form that Man on the Moon deconstructs with wit, precision, and a depth of feeling that’s all the more remarkable given the self-conscious games the movie is playing; in spite of Alexander and Karaszewski’s hall of show business mirrors structure and their constant reminders that Kaufman was unknowable, Man on the Moon builds to an emotional climax as wrenching as it is subtle. Like Kaufman, Forman and his screenwriters keep the viewer guessing about what’s real and sincere and what isn’t; when it turns out, in the film’s final moments, that Man on the Moon is both a profound meditation on mortality and an extended meta in-joke, one can’t help but be amazed by the filmmakers’ audacity in trying to achieve such different ends in the same movie, and by their skill in actually pulling it off. Kino’s Blu-ray includes some terrific extra features, including an archival conversation between Forman, Alexander, and Karaszewski, and a smart and funny commentary track by the screenwriters and film historian Howard S. Berger. It’s not to be missed.